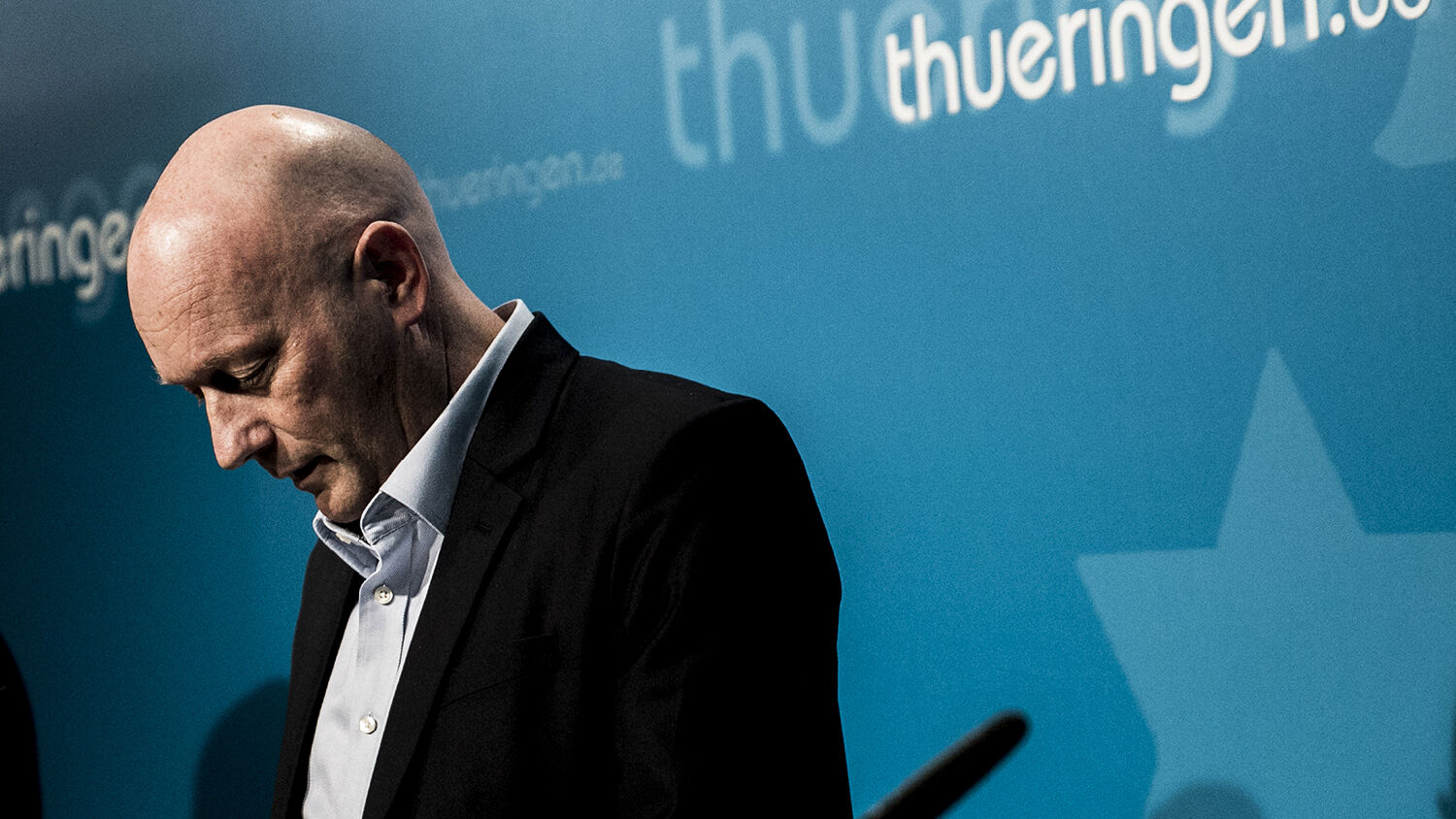 What’s worse: a political deadlock or cooperating with the far right?

A far-right party played the role of kingmaker in Thuringia, Germany, yesterday—the first time this has happened in a German state in the country’s postwar history. The breaking of this taboo sent shock waves across Germany, and even around the world.

Thomas Kemmerich, a member of the Free Democratic Party (fdp), was elected premier of Thuringia, with the help of the Christian Democratic Union (cdu) and the far-right Alternative für Deutschland (AfD).

Until now, all mainstream German parties have refused to work with the AfD. The breach of this taboo created such strong backlash that Kemmerich announced his resignation today—after holding office for less than a day. “The resignation is inevitable,” he said. “Yesterday, the AfD tried a perfidious trick to damage democracy. Democrats need democratic majorities. Obviously, they cannot be produced in this parliament.”

Despite lasting less than a day, his short term is an important milestone, and a clear symbol of how unstable Germany’s politics have become.

Thuringia held state elections last October. The result was deadlock. The far-left Left party came in first place, with 31 percent of the vote. The AfD was second with 23.4 percent. The result meant that any government had to include one of the extreme parties—either on the far left or the far right. None of the usual coalitions were feasible.

What would be better, the mainstream parties asked themselves, cooperating with the far right or not governing at all?

The AfD repeatedly offered to be the kingmaker for one of the cdu’s or fdp’s candidates, but this would have meant entering a deal with the devil, as many see the AfD. The AfD branch in Thuringia is led by Björn Höcke, one of the party’s most overt radicals.

As anti-Semitism becomes an increasingly prominent issue in Germany, various leaders have appealed to the people to remember their history lest it repeat itself. Höcke, however, has a different viewpoint; he has called for a “180-degree shift” in Germany’s remembrance culture of the Holocaust. He believes recalling that history is crippling the nation. Referring to Berlin’s Memorial to the Murdered Jews of Europe, Höcke said Germany has built “a monument of shame” in the heart of its capital and spoke in favor of the abolishment of a law that makes Holocaust denial illegal in Germany.

So the fact that Kemmerich was voted into office yesterday with the support of the cdu and AfD strongly indicates that some kind of a deal was made behind closed doors.

Media, politicians and citizens responded furiously. Protesters outside the state parliament quickly recalled that it was in Thuringia that a Nazi minister was first allowed into the government in 1930. Former Thuringian State Premier Bodo Ramelow also compared the event to 1930 and tweeted two pictures that juxtaposed Kemmerich and Höcke and German President Paul von Hindenburg and Adolf Hitler.

Hindenburg is still a controversial figure in Germany. Many believe he could have prevented Hitler’s rise, but instead helped him come to power. He believed the deadlock would never end otherwise.

While most support Kemmerich’s resignation, many more say he should have never accepted the vote to begin with. The fact that he accepted the office was a scandal in itself, even if no previous deal with the AfD had been made. Accepting the vote is being interpreted as a sign that the parliament is now willing to cooperate with the AfD.

This vote has brought heavy pressure on cdu leader Annegret Kramp-Karrenbauer. How was it possible that cdu members, along with AfD members, voted together for a state premier from the fdp? Many previously feared that the cdu in Thuringia would be the first to give into the pressure and cooperate with the far right.

Kramp-Karrenbauer explicitly condemned any kind of cooperation before and after the vote. But her statements and the reality of the situation indicate that she lost control over her own party. German Chancellor Angela Merkel, who stepped down as the cdu’s party leader, intervened, calling the vote unacceptable and demanding new elections.

“The election of this state premier was a unique process,” she said, “that broke with a fundamental conviction of mine and my party’s, namely that you don’t win majorities with the help of Alternative für Deutschland.”

Comments from Chancellor Angela Merkel on the latest twist in German politics.

The CDU should not participate in a government under Prime Minister #Kemmerich, Merkel said on the sidelines of her state visit to South Africa.#ltwth #Thuringia #ThuringiaElection pic.twitter.com/u4lEuP9vKG

What happened yesterday in Germany is a strong reminder that history can indeed repeat itself. Many fear that the rise of the AfD, and mainstream parties’ possible cooperation with them, is one of Germany’s greatest dangers at the moment. Its political deadlock is strengthening the far right as it gains momentum.

Germany’s Nazi past is glaring everyone in the face. But few realize that Germany’s greatest threat is not coming from the AfD!

Many hope that the AfD’s rise will be stopped if mainstream parties regain popularity. They hope that the right leader will reset everything, restoring the status quo.

They will get such a leader—as the Bible reveals. He could use Germany’s current political deadlock as a stepping-stone for his power grab. He will not appear as far right as the AfD. Instead, he will appear as a man of peace. But the Bible strongly warns that, though he appears moderate, he will cause havoc.

Trumpet editor in chief Gerald Flurry repeatedly points readers to a prophecy in Daniel 11: “And in his estate shall stand up a vile person, to whom they shall not give the honour of the kingdom: but he shall come in peaceably, and obtain the kingdom by flatteries” (verse 21).

This man will not come to power through votes, the normal democratic means. He will most likely not come from the AfD either. That doesn’t mean we don’t need to worry about the AfD. It is a dangerous symptom of social trends in Germany—a clear sign that the nation is retreating to the paths trod in the 1930s.

The coming leader will use Germany’s current turmoil—the same turmoil that has caused the rise of the AfD—and appear to be the nation’s savior! Notice what Mr. Flurry wrote concerning this prophecy in the January 2020 Trumpet issue:

Knowing that such political intrigue will occur makes the bureaucratic turmoil in Berlin important to watch. The government is shaky, the need for strong leadership is clear—but the path to achieve it is unknown. This prophesied leader may well exploit this frustration and confusion by rallying a coalition behind him and vaunting himself to power. This would take a lot of intelligence and calculation; it would require unusual skill to deceive people in high places with flattery. But the prophesied Daniel 8 man will do it magnificently. Adolf Hitler was a man of mental strength, but he was not as adept at deceiving people as this coming strongman will be! This leader will come as an angel of light.

This is a stark warning! Yesterday, Germany was up in arms because of an apparent cooperation between the far right and its mainstream parties. Historians, politicians, activists, the German media and the international media all sounded the alarm. Certainly, they did so for good reasons! But at the same time, they are totally ignorant of God’s sure word of Bible prophecy. For this reason, history will repeat itself, and they will fail to recognize it!

God revealed to the late Herbert W. Armstrong that the Nazi empire was part of the prophesied sixth resurrection of the Holy Roman Empire (Revelation 17:10). He also revealed to him that this empire would rise one more time, just before the return of Jesus Christ! We are now seeing the rise of this empire! But though the rise of the AfD is certainly a big part of this trend, the Bible reveals that this last resurrection will be much more subtle and lead this world suddenly to war.

We believe that we know who will lead this last resurrection. It is a man who most of the world pays little attention to. What’s more, when he comes to power, most will likely celebrate him as a man who successfully ended the rise of the far right, just as Austrian Chancellor Sebastian Kurz did.

We believe that Germany’s next strongman will be former Defense Minister Karl-Theodor zu Guttenberg. Read “Is KT zu Guttenberg About to Come to Power?” by Gerald Flurry and learn what the Bible says about Germany’s current political turmoil and where it will lead. This article gives a stark warning that is totally unlike what is currently coming from various media outlets.