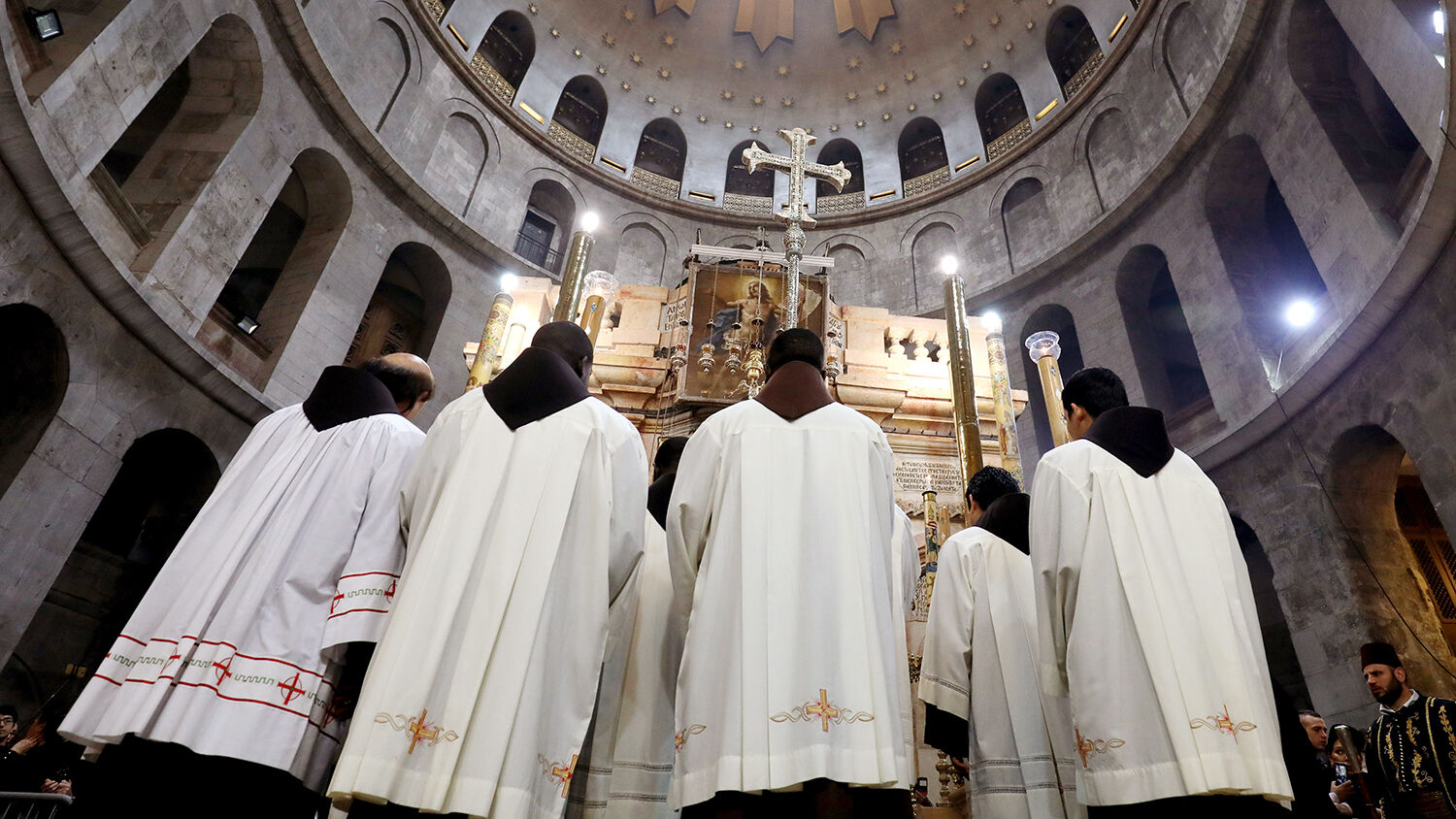 Roman Catholic clergy pray at the Church of the Holy Sepulchre in Jerusalem’s Old City on April 21, 2019.
GALI TIBBON/AFP via Getty Images

There is a reason why the Catholic Church is openly supporting the Palestinians and feeding instability in the region.

United States President Donald Trump revealed his “deal of the century” on January 28. Since then, the world has responded with an outburst of both praise and hatred. The most negative reaction has come from Europe and the Catholic Church.

Catholic officials have strongly criticized President Trump’s peace plan, claiming that it does not take into consideration “the just demands of the Palestinian people for their homeland, their rights and dignified life. This plan will bring no solution, but rather will create more tensions and probably more violence and bloodshed.” Instead, the Vatican believes that the deal only endorses the demands of the Israelis and has called on Christians around the world to “pray for the Holy Land,” that a “voice” would be given to the “voiceless.”

These statements confirm that the Catholic Church believes the Palestinians are the victims and only serves to give them justification to continue attacking Israel. The letter states that President Trump’s plan will be the cause for any Palestinian violence that follows the peace deal—rather than the terrorists themselves.

Europe has also responded in alignment with the Catholic Church.

Hugh Lovatt for the European Council on Foreign Relations wrote on Wednesday that the U.S. plan “runs counter to internationally agreed parameters, international law, and past United Nations Security Council resolutions.” He wrote that the EU should “reject the U.S. plan in full and take steps to prevent it from becoming a new and dangerous reference point in attempts to resolve the Israeli-Palestinian conflict.”

He argued that Mr. Trump “is formalizing the discriminatory dual legal regime that favors Jewish Israelis over their Palestinian neighbors.”

German Foreign Minister Heiko Maas took a similar stance, questioning whether the deal had “the involvement of the conflicting parties,” and implying that he too felt the deal favored one side. German lawmaker Johann Wadephul called it a “unilateral peace plan” that would only intensify conflict. Spanish High Representative of the EU Joseph Borrell said that they must carefully analyze the deal to ensure it “takes into account the legitimate aspirations of both the Palestinians and the Israelis.”

This was further stipulated by Lovatt, who called for European powers to get more involved in the peace process in response. He wrote:

European governments … must urgently take decisive steps towards a viable two-state solution in line with internationally agreed parameters as the best means of ensuring equal rights for both peoples. This means rejecting Trump’s plan and recognizing the State of Palestine based on the 1967 borders, with East Jerusalem as its capital. Western EU member states such as France have vowed to do so “at the right moment.” That moment is now.

The European response presents itself as the defender of equality for both parties.

Europe is already reaching out to the Palestinians. On Friday, the European Commission announced a $47 million assistance package for “activities in East Jerusalem” and “support towards building a democratic and accountable Palestinian state through targeted policy reforms, fiscal consolidation, reinforcing businesses and small- and medium-sized enterprises, strengthening the Palestinian civil society, and providing access to water and energy.” This assistance is over and above several other monetary packages made to the Palestinian cause.

While Europe follows the Catholic Church’s stance on the deal, standing in surprising contrast is the response from several Arab states.

An article by the Washington Examiner on Thursday noted that of the 23 nations that had expressed their support for the plan, seven were from the Middle East.

Statements from nations such as Bahrain and Oman expressed their appreciation to President Trump for his efforts to end the conflict. The strongest Arab support came from the two most important players in the region—Saudi Arabia and the United Arab Emirates. Both of these countries urged Palestinian leaders to use Trump’s peace plan as the foundation to launch negotiations with Israel. The Saudi Foreign Ministry called for “the start of direct peace negotiations between the Palestinian and Israeli sides, under the auspices of the United States, and to resolve disagreements with aspects to the plan through negotiations.” The U.A.E. called it “a serious initiative” and “an important starting point for a return to negotiations within a U.S.-led international framework.”

While other neighbors have openly opposed the deal—especially Jordan, Iran and Turkey—the refusal by some Arab states to directly criticize the deal has angered the Palestinians. The fact that several Arab states were at least willing to accept the plan as a starting point makes the Catholic Church and Europe’s response even more condemning.

As one of the biggest opponents to the peace plan, Catholic Europe has revealed its hatred for Israel. This hatred is becoming more overt with each passing year.

Pope Francis used a visit to Jerusalem in May 2014 to show his open support for the Palestinians. He visited the Palestinians first, took a photo op at the Bethlehem security wall with graffiti accusing Israel of apartheid, openly embraced and praised Palestinian leaders, and refused to admit the role of Nazi Germany or the Vatican in World War ii while visiting Jerusalem’s Holocaust museum. The pope implied Israelis were modern-day Herods, while calling men who have openly said they want to kill the Jews his “brothers.” Trumpet editor in chief Gerald Flurry wrote that these events “shed light on the future of Europe and of the world.”

About the pope’s photo op at the Bethlehem security wall—still one of the most iconic photos of his tenure—Mr. Flurry wrote: “The pope knows how to use symbolism, and this is the symbol he created to show the world. It did not happen by accident! … Francis clearly favors the Arabs, and he is projecting a distorted view of the Jews in the Middle East.”

We saw the same view in the Catholic Church’s response to the peace plan.

Exactly a year after his visit to Jerusalem in 2014, Pope Francis announced the Vatican’s formal recognition of the “state of Palestine.” Trumpet managing editor Brad Macdonald wrote that while the pope’s “rhetoric and body language, the gracious gestures, the smiles and salutations give the impression of a selfless liberator determined to broker peace, cooperation and tranquillity,” the Vatican is actually “creating tension, disunity and instability that are likely to lead to conflict and war.”

Take an honest look at the Catholic Church’s history—from the Crusades to its support of the Nazis in World War ii to its current support of the Palestinians—and you see a power consistently opposed to the Jews. Its response to Mr. Trump’s peace deal reaffirms this.

Why is the Catholic Church so opposed to Israel? Is it merely a neutral observer, or does it have its own agenda? You can learn more about the Catholic Church’s critical role in this region of the world in Gerald Flurry’s article “The Dark Side of the Pope’s Visit to Jerusalem.”