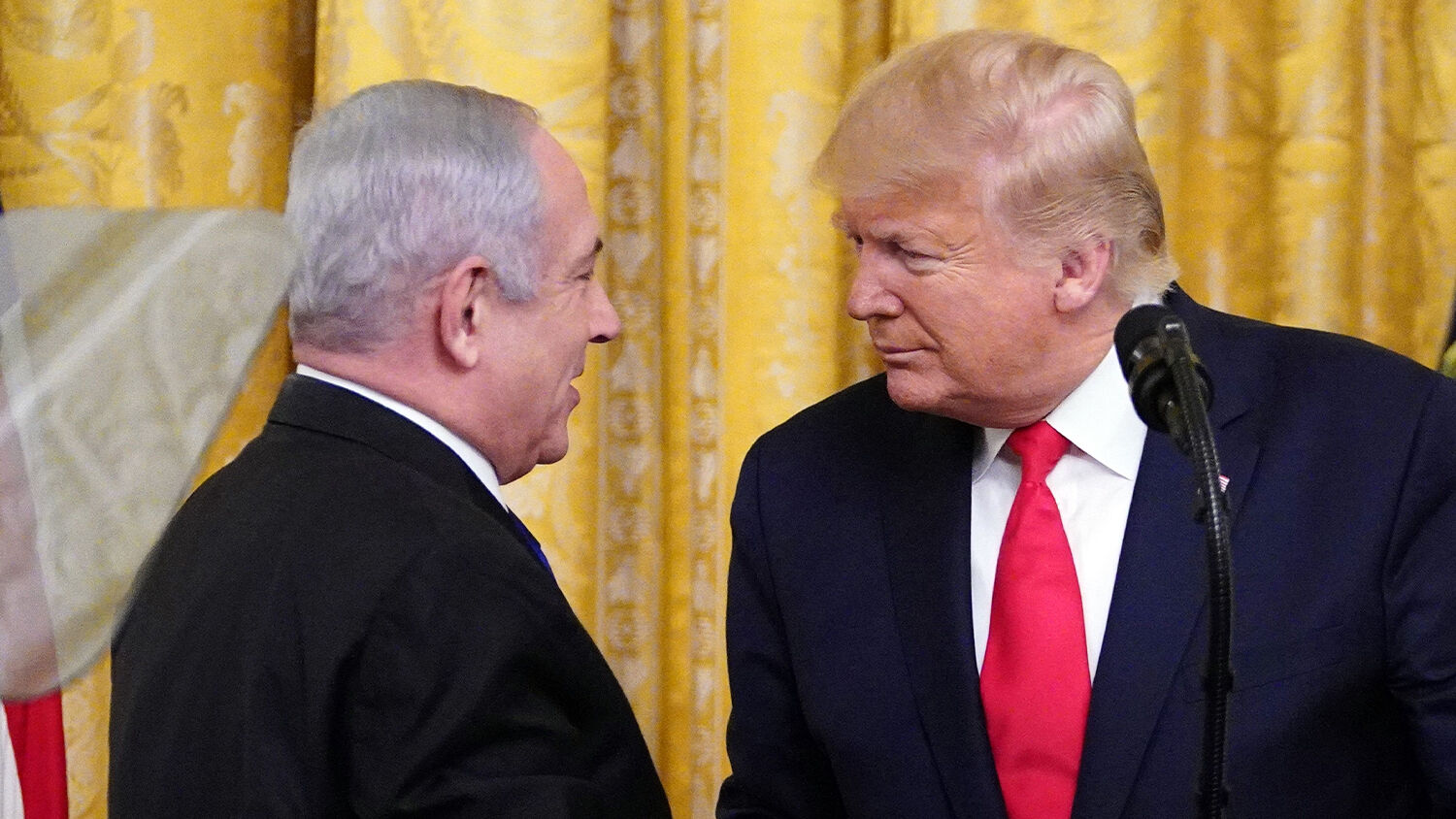 Can America’s president make the deal of his life?

Donald Trump’s peace plan, helmed by his son-in-law Jared Kushner and three years in the making, was released in a televised announcement Tuesday. Mr. Trump delivered the plan at the White House, with Israeli Prime Minister Benjamin Netanyahu standing alongside. The document outlining Trump’s plans—180 pages long—was touted as “the most detailed proposal ever put forward by far.” Trump later released a series of tweets in Hebrew, Arabic and English, each displaying his administration’s proposed map for what a two-state solution would look like.

This is what a future State of Palestine can look like, with a capital in parts of East Jerusalem. pic.twitter.com/39vw3pPrAL

There are a number of interesting observations on the newly released two-state map. First, Israel retains sovereignty over the Jordan Valley, bordering Jordan. Ownership of this territory is nonnegotiable to Israel, as a dire matter of national security along its longest land border. Second is a tunnel-highway linking Gaza and the West Bank. This will be interesting, as both territories are ruled by sometimes violently opposed factions. The peace plan, though, requires the dissolution of the governing Gaza terrorist body, Hamas, as well as Islamic Jihad. Third, additional Palestinian territories are proposed close to the Egyptian Sinai border, and linked to Gaza. Fourth, while Trump reaffirmed that Jerusalem “will remain Israel’s undivided capital,” a Palestinian capital would be established in East Jerusalem, “where America will proudly open an embassy.” Further, the Israeli settlement enclaves in Judea and Samaria will remain sovereign within the Palestinian state, with Israeli access roads.

“This is the first time Israel has authorized the release of a conceptual map, illustrating the territorial compromises it’s willing to make for the cause of peace. And they’ve gone a long way,” Trump stated. He stated that the map more than doubles Palestinian territory, and that “[n]o Palestinians or Israelis will be uprooted from their homes.” Promising $50 billion in Palestinian aid, Trump projected that if executed correctly, the plans would result in the creation of 1 million new Palestinian jobs over the next decade, Palestinian poverty slashed in half, and a tripling of their gross domestic product.

The proposal was met with strong approval from Prime Minister Netanyahu, as well as his election opponent Benny Gantz (Blue and White). Throughout his speech, President Trump repeatedly referenced the degree of foreign support for his plan. Present in the room for the unveiling were ambassadors of the United Arab Emirates, Oman and Bahrain. Following Trump’s speech, Netanyahu spoke, addressing the failures in previous peace plans to accommodate Israel’s security needs, especially in the Jordan Valley. “Rather than pay easy lip service to Israel’s security and simply shut your eyes, hope for the best, you recognized that Israel must have sovereignty in places that enable Israel to defend itself, by itself.” He continued:

Mr. President, because of this historic recognition, and because I believe your peace plan strikes the right balance where other plans have failed, I’ve agreed to negotiate peace with the Palestinians on the basis of your peace plan.

The Palestinian Authority, however, was singing a very different tune.

“We say a thousand times: No, no and no to the deal of the century,” Palestinian Authority President Mahmoud Abbas responded, further calling it the “slap of the century. If Allah wills, we will strike them back with slaps.” Before the plan was even announced, the Palestinian leadership said they would reject it. On the $50 billion aid package, Abbas responded that “Jerusalem is not for sale; all our rights are not for sale,” calling the deal a “conspiracy.” Palestinian officials have condemned the peace plan for “normalizing” the status quo of Israeli occupation and inherent bias toward Israel (as especially shown by the optics of the plan’s release, with Trump accompanied by Netanyahu). The plan has been accused of merely fulfilling a wishlist of Israeli demands, and forcing the Palestinians to relinquish claims to 30 percent of land in the West Bank. The Trump administration was criticized for failing to consult with the Palestinians (although Abbas reportedly rejected a telephone call from Trump ahead of time to talk about the release). Talks with the United States have been boycotted by the Palestinians for two years, following the moving of the U.S. Embassy to Jerusalem.

Time will tell if the Trump peace plan will be at all successful, where every previous plan has failed. What it has done thus far is cement the two sides: the close relationship of Mr. Trump’s America and Mr. Netanyahu’s Israel, and their similar vision in extending an olive branch of Palestinian statehood; and a potential resumption of ties between Palestinian Authority’s Abbas and Hamas’s Ismail Haniyeh, seeking to put differences behind them in order to present a united front against the Trump plan. The status of Jerusalem is a key nonnegotiable uniting force for Palestinians of both Gaza and the West Bank.

Thanks to the close bond Israel shares with the Trump administration, Israel is now in a very favorable and secure condition, and has experienced a post-Obama era “resurgence” alongside America’s own financial and military resurgence. The close “brotherhood” and successes of the two nations was highlighted by Netanyahu, who followed after Trump’s announcement:

Your historic decisions to recognize Jerusalem as Israel’s capital; to recognize Israel’s sovereignty over the Golan Heights; to reaffirm Israel’s legal claims in Judea and Samaria; to stand up to Iran; to pull out of that dangerous Iran deal; to confront—“confront” is not the word—to eliminate Qassem Suleimani; to support and encourage unbelievable cooperation between Israel and the United States in the military and strategic and intelligence fields—all this bear testament to the friendship and depth of your leadership and commitment to Israel.

In an article titled “A Prophesied Resurgence in Israel,” theTrumpet.com managing editor Brad Macdonald highlighted this remarkably close unity and cooperation between Trump and Netanyahu. Certainly, it has brought tremendous benefits. But he also warned of overconfidence, based on a parallel biblical story of resurgence and alliance between King Uzziah of Judah and King Jeroboam of Israel. In fact, more than just a parallel historic situation, this is a prophetic one.

Bible prophecy forecasts that in the long run, this peace deal will not work. The majority of Bible prophecies are for the end time—and these prophecies actually include the Israeli-Palestinian peace process (calling it a “wound”). The Bible declares that Jerusalem will become a point of worldwide contention and a burden. “And in that day will I make Jerusalem a burdensome stone for all people: all that burden themselves with it shall be cut in pieces, though all the people of the earth be gathered together against it” (Zechariah 12:3).

The Bible prophesies that, although Israel would initially control all of Jerusalem in the end time (a prophecy that was fulfilled with the miraculous recapture of the city in 1967), the Holy City would eventually be split in half, wrested by the Palestinians (most likely through violence). The Bible describes that the continuing conflict will spiral out of control across the Middle East and around the world, eventually culminating in the return of Jesus Christ. For a full, detailed scriptural explanation, request our free booklet Jerusalem in Prophecy.

In the short term, Israel is in a good position, with full control of an undivided Jerusalem. But the nation should not become overconfident. Despite the plans of President Trump and Prime Minister Netanyahu, the status quo will not last long.