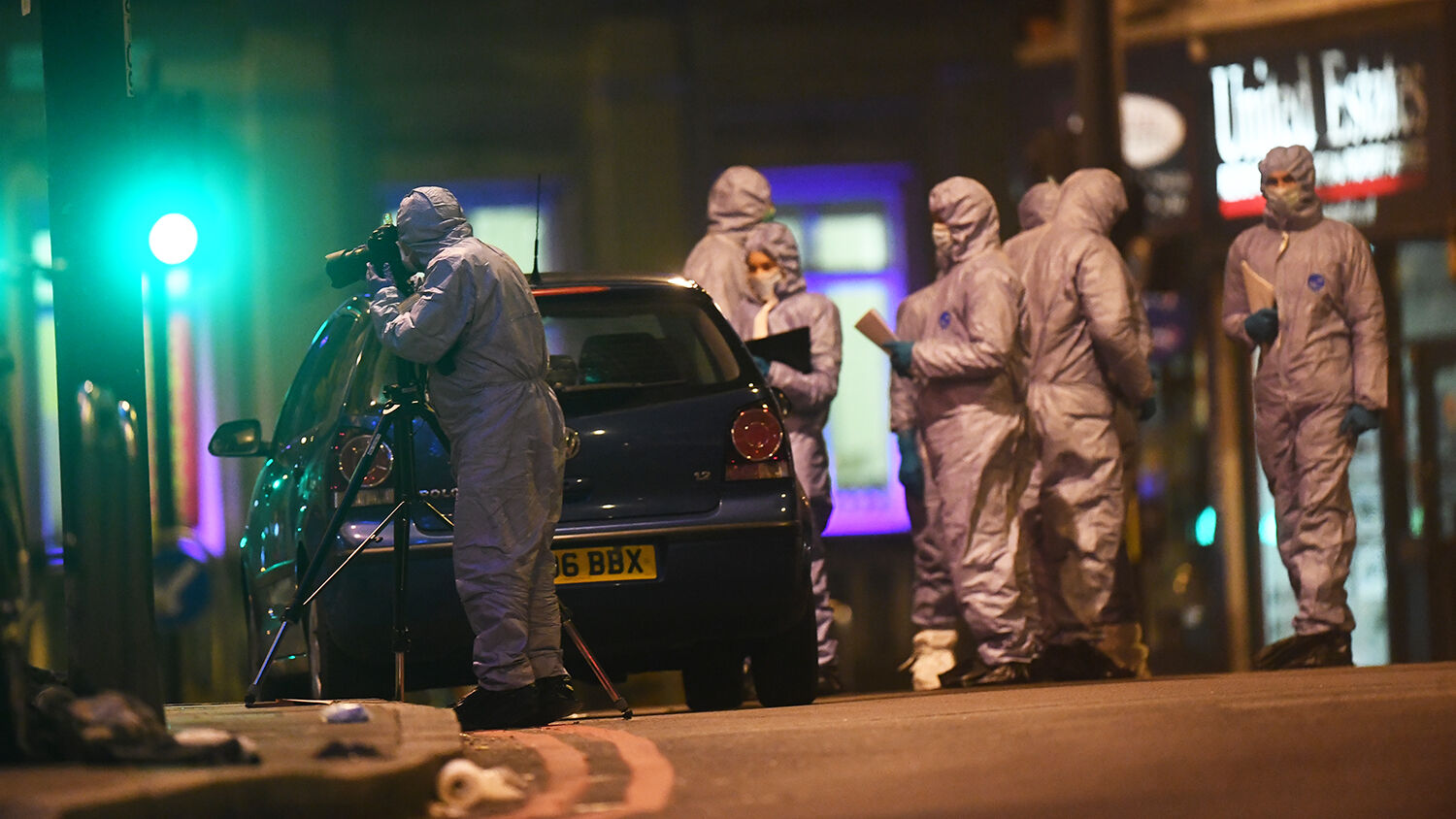 Police forensics officers work at the scene in Streatham High Road, south London after a man was shot dead by armed officers, with police declaring the incident as terrorist-related.
Victoria Jones/PA Images via Getty Images

A terrorist motivated by radical Islamic ideology stabbed two in London on February 2 after being released from prison without an assessment. The attack raises questions about the leniency of Britain’s prison system and exposes the weakness of authorities in preventing known terrorists from roaming the streets. Yesterday’s attack joins a growing list of violence, and if nothing changes, this attack will not be London’s last.

The 20-year-old attacker, Sudesh Amman, began a stabbing spree in London’s southern neighborhood of Streatham. Wearing a fake suicide vest, he stabbed and wounded a man and woman before nearby police shot and killed him.

Amman’s assault was the second Islamic terrorist act in London by a released prisoner within two months.

The attack could have been worse. It was stopped by the close proximity of counterterrorism officers. Amman was known to the police, and the plainclothes officers had been following him. But the fact that a convicted terrorist made it onto the streets of London reveals a flaw in Britain’s police system. It raises several questions. Is a quick response good enough when a hate-filled attacker, motivated by radical Islam, wounds or kills a law-abiding citizen? Is it worthwhile to expend police resources shadowing a known terrorist, or should the attacker have been kept in prison?

What happened in Streatham demonstrates the main problem with Britain’s approach to policing: Britain is trying to fix the symptoms of its terrorism problem without removing the cause.

Up to 180 convicted terrorists were released early over the past two decades, according to the Telegraph. That does not include terrorists who were released after serving a full sentence. Police resources are being poured into trailing these terrorists. In the coming months, 14 terrorists are due to be released in like manner. Meanwhile, enforcement of other basic laws is also being neglected. Theft cases have been ignored to the point that the crime has effectively been “decriminalized,” Caroline Goodwin, chairman of the Criminal Bar Association, told the Telegraph.

This is the same unresolved problem that allowed another convicted terrorist, Usman Khan, to kill two people in November. Khan was supposed to be attending a rehab conference. He was a poster boy for Britain’s deradicalization process. Yet none of that stopped him. Statistics show that even if Sunday’s attacker had been through these programs, chances are they would have failed to change him. They have been proved ineffective 95 percent of the time.

But the problem goes deeper than this. A reformation of policy or an improvement in reeducation efforts will not solve this crisis. Solving it requires a totally different law than what politicians can provide. (Trumpet executive editor Stephen Flurry discussed this in his February 3 episode of the Trumpet Daily Radio Show.)

Why are Britain’s cities, symbolic of modern humanity’s progress, home to these epidemics of violence?

Only one law clearly answers this.

God says that because of our failure to repent and turn to His laws, our societies will be cursed with terror. His warning is more relevant than ever in this 21st century. “And if ye shall despise my statutes, or if your soul abhor my judgements, so that ye will not do all my commandments, but that ye break my covenant: I also will do this unto you; I will even appoint over you terror …” (Leviticus 26:15-16). This prophecy is aimed specifically at modern Britain, as well as the United States (order your free copy of The United States and Britain in Prophecy to learn more). The curse of terrorism will not go away because Britain refuses to turn to God’s law.

Terrorism will continue until Christ’s return, when He will establish God’s law over all mankind. There is hope for mankind, but that hope does not lie in politicians and man’s law. You, as an individual, can choose to follow God’s law and avoid the suffering, which lawlessness brings.

To understand why anti-terror programs have not made our cities safe, and what the true solution is, watch Trumpet editor in chief Gerald Flurry’s Key of David episode “The Only Way to Win Our Terrorist War.”