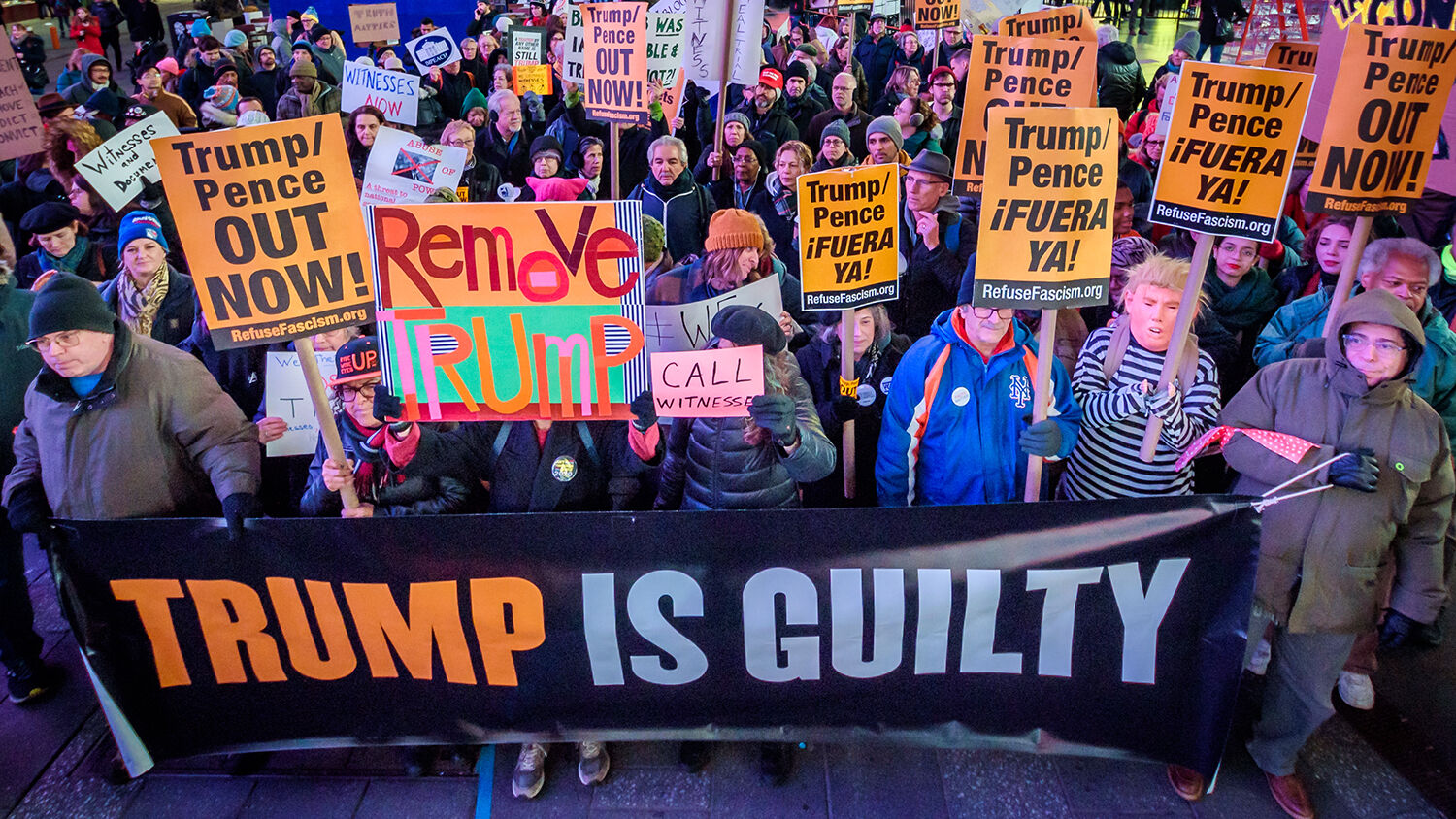 Members of the activist groups March for Truth and Rise and Resist take to the streets in Times Square, holding signs and banners, and chanting, “Nobody is above the law.”
Erik McGregor/LightRocket via Getty Images

America and Europe are approaching a political turning point.

Satisfaction with democracy is at an all-time low around the world, a Cambridge study published in January has shown. This growing trend is going to transform the world—especially America and Europe.

“Across the globe, democracy is in a state of deep malaise,” said the report. It found that dissatisfaction with democracy is highest in developed nations, the same places that have been exposed to it the most.

In the early 1990s, the majority of people in North American, European and Asian democracies were satisfied by how the system worked. But since 1995, average global dissatisfaction has risen from 47.9 percent to 57.5 percent on average. Whereas many Asian democracies have remained committed to democracy, Europe and the Americas are seeing concerning declines.

This data shows the highest level of dissatisfaction since record-keeping began in 1995. 2005 was also a turning point: Democracy reached its high point. Dissatisfaction was only 38.7 percent that year. However, from 2005 on, a decline set in.

Europe is particularly divided. It is home to both the world’s least satisfied and most satisfied democracies. A few nations, such as Norway and Switzerland, rank as highly content with democracy. There, income is generally high and society has been more insulated from major economic and geopolitical shocks.

In many European nations, especially France and Spain, discontentment with democracy has continued to grow, even as the nation recovered from the 2008 economic crisis. “It is likely that, beyond personal feelings of economic dissatisfaction, the crisis has brought forward a broader sense of political discontent that is tied to economic sovereignty, national pride, and anger over the use of public resources,” stated the report.

Economics has always been a major influence on the popularity of a government. Right now, the Continent is splitting. The report stated, “Europe’s average level of satisfaction masks a large and growing divide within the Continent, between a ‘zone of despair’ across France and southern Europe, and a ‘zone of complacency’ across Western Germany, Scandinavia and the Netherlands.”

Democracy has died in Europe during times of crisis. At the start of the 1930s, the Great Depression generated anger toward Chancellor Heinrich Brüning’s government. At that time, “the basis of democracy was disintegrating in Germany against the background of 5 million unemployed and a host of unmitigated economic woes,” writes John Cornwell in Hitler’s Pope. Ultimately, this led to the fall of Brüning on May 29, 1932. By 1933, violence between Communists and Nazis created a pretext for the Nazi party to invoke martial law. The final blow to democracy came with the Reichstag fire of Feb. 27, 1933. This gave Hitler an excuse to pass the Enabling Act less than a month later, in late March. Hitler gained dictatorial powers and Germany was firmly set on the course of war.

Democracy faces similar threats today. A European financial crisis would drive many voters into the arms of alternative parties and make Europe unite around a strong German leader, as the economic and political crises of the 1930s did for Germany. Herbert W. Armstrong, founder of the Plain Truth, our predecessor magazine, prophesied exactly that.

The decline of democracy is no minor trend. It tends to precede violence.

The largest downward shift of all happened in America, with Australia, the United Kingdom and Spain close behind. This is particularly relevant for the United States, where polarized politics have split the nation in half. Rising dissatisfaction with democracy in the U.S. goes back to 2005. Trumpet editor in chief Gerald Flurry’s article “America Has Been ‘Fundamentally Transformed’” explains the threat posed by the radical left’s war against democracy.

The same turn against democracy was observed in other Anglo-Saxon countries, only slightly later than in the United States. Australia followed with a sharp increase a few years later. The steepest increase in dissatisfaction of all was seen in Britain in 2016.

Ironically, the nations where modern democratic principles were born and flourished first are the ones most discontented with democracy.

While the decline of democracy weakens America, it will have an opposite and even more deadly effect in Europe.

European politics are in a death-spiral toward strongman leadership. Rising discontent with democracy has fueled the rise of populists. Though this trend is evident from statistics alone, there is even stronger proof that Europe is headed in a dangerous direction.

In Daniel Unlocks Revelation, first published in 2005, Mr. Flurry writes, “Politics in Europe are going to shift dramatically to the right.” He wrote this in relation to a Bible prophecy found in Daniel 8. Describing a German leader who will come to power in the time immediately before Christ’s return, verse 23 states, “And in the latter time of their kingdom, when the transgressors are come to the full, a king of fierce countenance, and understanding dark sentences, shall stand up.” Mr. Flurry writes in detail about this prophecy in A Strong German Leader Is Imminent. He states, “This soon-coming ruler could literally be called a king. Even if he is not, the Bible gives him that label. When the Bible talks about a king, in most cases it’s saying that this is not a democratic government.”

Revelation 17:3 shows this man will be at the head of an undemocratic government based on a universal religion. A church (symbolized in the Bible by a woman) rides, or controls, the empire, symbolized by the beast. Throughout history, this church has been heavily involved with European unification. After World War ii, leaders of the Catholic Church embraced democracy as a means to preserve its relevance, because, as Jan-Werner Mueller wrote for Project Syndicate, “[a] religion that claims universal validity could not allow itself to become just another interest group among many.”

God will use this European power as “an instrument of correction upon the nations of Israel,” writes Mr. Flurry (see Isaiah 10:5). Israel mainly refers to the United States and Britain, along with the State of Israel (for a full explanation of these prophetic identities, request your free copy of The United States and Britain in Prophecy, by Herbert W. Armstrong). This correction on the nations of Israel comes to bring repentance of sins and turn them to God.

Democracy is losing its grip in Europe. Its decline will fundamentally change the world. For more information, order a free copy of A Strong German Leader Is Imminent.