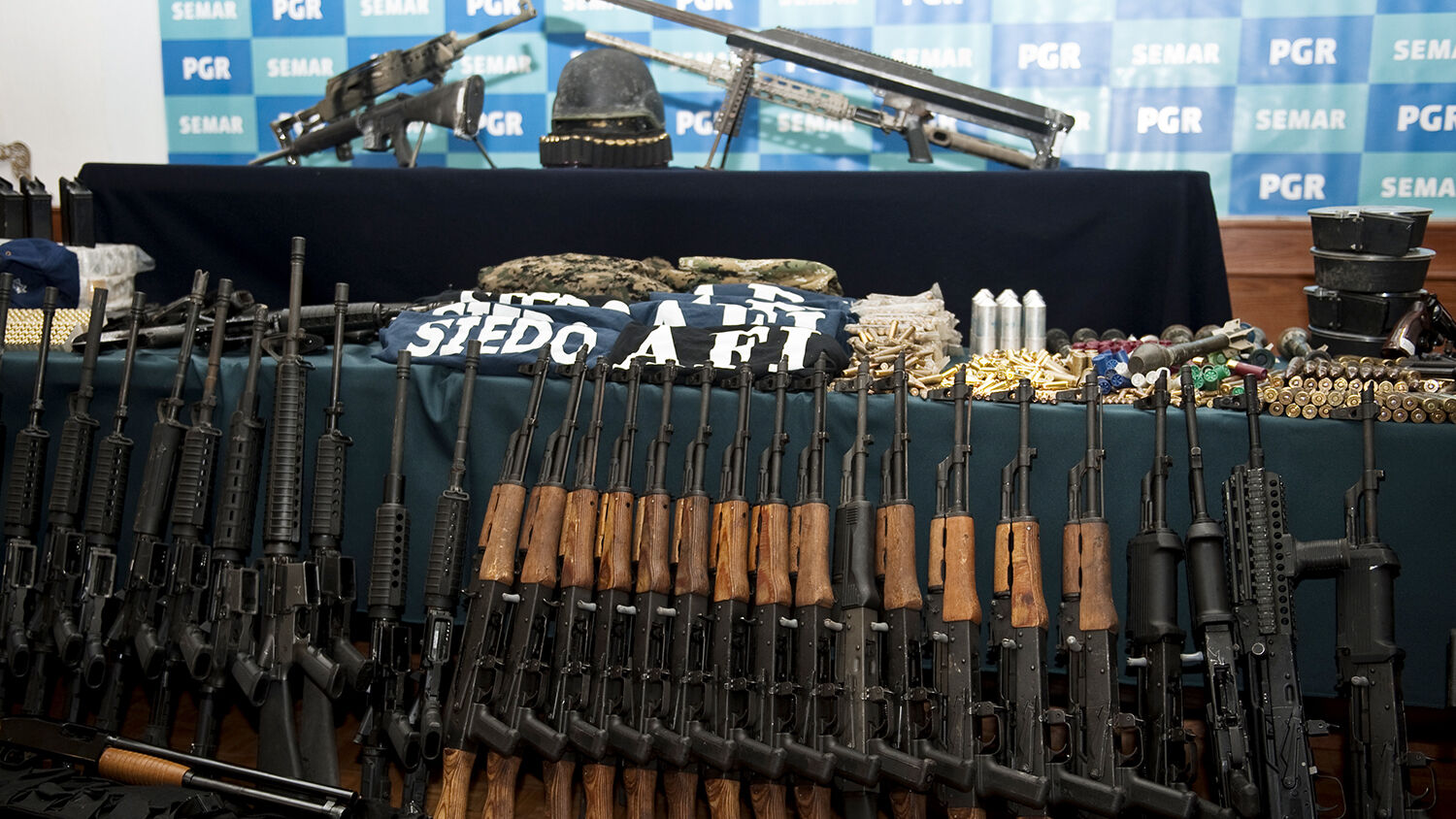 Armaments and ammunitions seized in the arrest an alleged member of the drug cartel Los Zetas are displayed during a presentation to the press in Mexico City, on Dec. 13, 2011.
Ronaldo Schemidt/AFP via Getty Images

The drug trade presents America’s enemies with a big opportunity.

As United States President Donald Trump considers officially labeling Mexican drug cartels as terrorist organizations, new facts are being exposed about the shocking ways drug smugglers get their weapons. Three months ago, a battle occurred in Culiacán, Mexico, between the Sinaloa cartel and militarized police. The cartel clobbered law enforcement using machine guns and armored vehicles, including a truck with a turret. Eight hours into the battle, Mexican President Andrés Manuel López Obrador ordered his troops to surrender.

Since Mexico has some of the most restrictive gun ownership policies in the world, cartels often purchase their weapons in other nations and then smuggle them into Mexico. Since the cartels have well-established smuggling routes into the United States, it is common for them to recruit “straw purchasers” to legally buy U.S. guns to hand over to smugglers for transport into Mexico. Many American officials pushing for stricter gun control in the U.S. say that nearly all of Mexico’s gun violence is perpetrated with illegal firearms from north of the Rio Grande. The discovery of European weapons in Culiacán proves them wrong.

Mexico’s Secretariat of National Defense estimates that almost 2 million firearms have been smuggled into the country in the past decade—roughly 200,000 guns per year.

Of these firearms, 70 percent come from American gun shops in Arizona, California, New Mexico and Texas. The other 30 percent comes from Austria, Belgium, Germany, Italy, Romania, Spain and other European nations. And these statistics ignore increasing evidence that Chinese companies are smuggling guns and precursor chemicals for narcotics manufacturing to drug cartels in the state of Colima. They also ignore guns sold to cartel agents from corrupt factions of the Mexican military.

In Europe, state-owned arms factories sell guns to the Mexican military and Mexican police. In many cases, these buyers pass on these European-made guns to drug cartels.

Investigators discovered seven Heckler & Koch rifles used by corrupt police officers in the 2014 kidnapping of 43 students at the behest of the Guerreros Unidos cartel. Even though Heckler & Koch directors deny having committed any offense, two former employees were given suspended prison sentences for their part in the scandal.

Even if there is no evidence European arms manufacturers intend for their weapons to be used by cartel gunmen, the fact that cartels have gotten their hands on European guns is a threat to America. During the Cold War, Russia and China deliberately supported Latin American cartels as a means of undermining America from within. There is some evidence that China continues this strategy today. And if European leaders are not deliberately arming cartels, they certainly have the ability to do so if they desire.

The drug trade presents any power that wants to destabilize the U.S. with an opportunity.

“With more than 100 million people, a growing economy and Atlantic and Pacific ports, Mexico is the only country in the Western Hemisphere that could theoretically (which is hardly to say inevitably) threaten U.S. dominance in North America,” Peter Zeihan wrote for Stratfor in 2008. “[I]n many regards, Mexico as a failed state would be a worse result for Washington than a hostile united Mexico. A hostile Mexico could be intimidated, sanctioned or even invaded, effectively browbeaten into submission. But a failed Mexico would not restrict the drug trade at all. The border would be chaos, and the implications of that go well beyond drugs. One of the United States’ largest trading partners could well devolve into a seething anarchy that could not help but leak into the U.S. proper.”

Politicians have put forth proposals to curb the carnage destroying Mexico. Leftists say that few people would die if the U.S. legalized drugs and banned guns, instead of vice versa. And many conservatives say that a border wall would stop the flow of drugs into the U.S. and the flow of guns into Mexico. Yet the facts show that as long as there is a multibillion-dollar demand for drugs in the U.S., the cartels will be able to purchase weapons from Austria, Belgium, China, Germany, Guatemala, Italy, Romania, Spain, Venezuela and a myriad of other nations in their efforts to infiltrate Mexico and the U.S.

Roughly 15,000 trained fighters work for the Mexican cartels. And over the past decade, they have received roughly 1.4 million guns from the United States and 600,000 guns from Europe (in addition to an untold number from China and Latin America). That is a lot of firepower purchased with drug money. Combine this firepower with that of the 1.4 million gang members cartels use to distribute drugs throughout the nation, and Mexican cartels are tapping into a force as large as the U.S. military.

The alliance between Mexican cartels and U.S. street gangs may represent America’s most serious domestic security threat. And it is assured that America’s adversaries are taking note of this strategic weakness. This entire situation is an example of the consequences of breaking God’s law. If Americans had not abandoned biblical family values, a generation of youth would not have been driven into hopelessness, escapism and drug addiction. The alliance between cartels and street gangs would have never formed.

“Ah, sinful nation, a people laden with iniquity, offspring of evildoers, children who deal corruptly! They have forsaken the Lord, they have despised the Holy One of Israel, they are utterly estranged. Why will you still be struck down? Why will you continue to rebel? The whole head is sick, and the whole heart faint. … Your country lies desolate; your cities are burned with fire; in your very presence foreigners devour your land; it is desolate, as overthrown by foreigners” (Isaiah 1:4-5 , 7; English Standard Version).

This prophecy notes that it will be primarily strangers and foreigners burning America’s cities, but the reason God allows them to do so is because Americans have turned away from His law. The fact that American drug money is allowing violent cartels to defeat Mexican law enforcement with European guns should be a wake-up call to every American!

For more information on how drug addiction and other problems are destroying the U.S., read Trumpet editor in chief Gerald Flurry’s free booklet No Freedom Without Law.