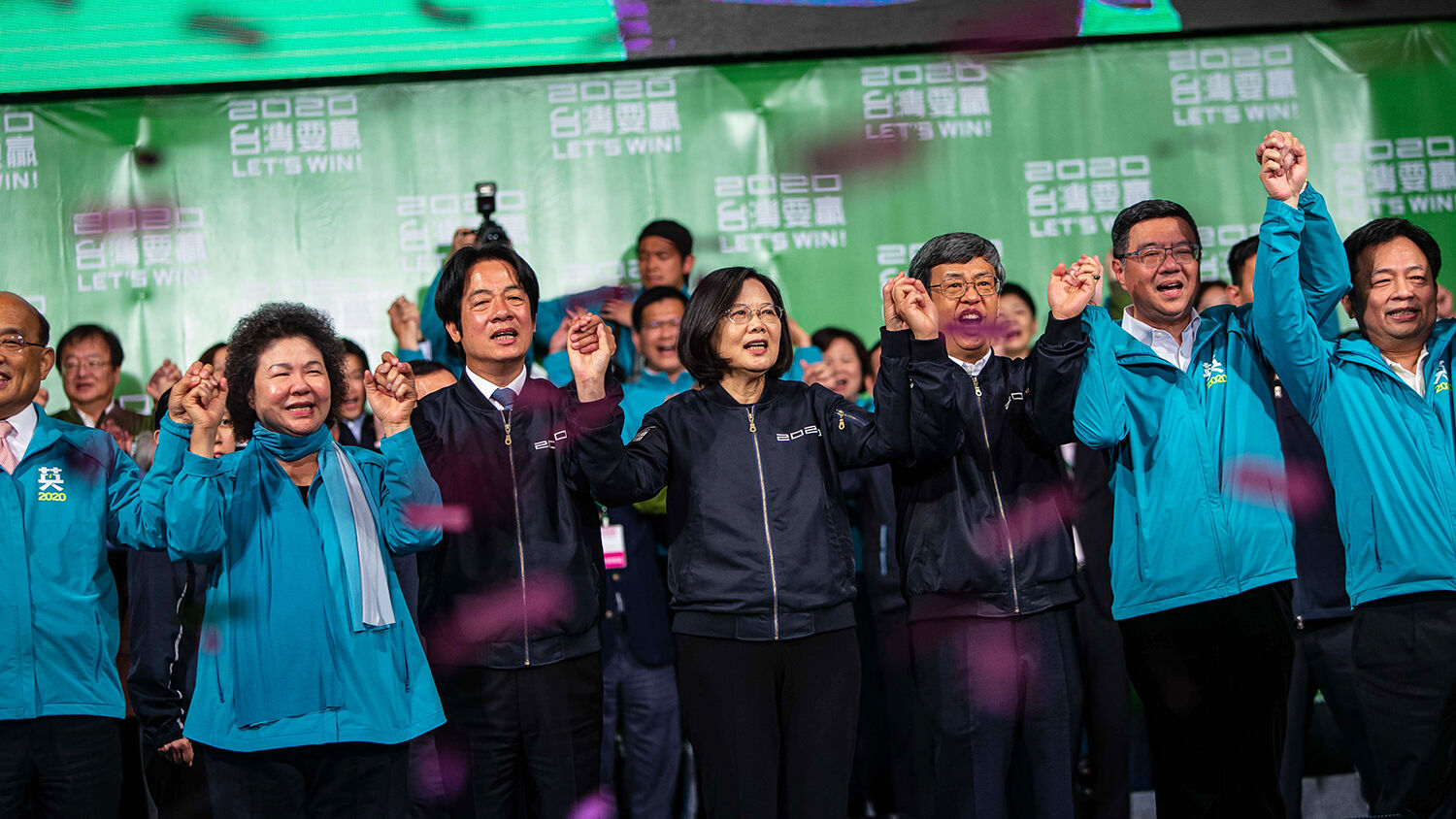 Taiwanese President Tsai Ing-Wen (center) thanks her supporters at the victory rally in Taipei after winning the January 11 election.
Chan Long Hei/SOPA Images/LightRocket via Getty Images

Anti-China forces won a landslide victory, but will it keep Taiwan out of China’s grasp?

Taiwanese President Tsai Ing-wen won a landslide victory in elections on January 11, extending her term for another four years. It will be another four years of maintaining distance from China. But in the long run, it will only be successful with help from crucial allies.

Tsai’s Democratic Progressive Party (dpp) won a majority in the parliament. This is the largest victory margin since 1996. The dpp came out 2.5 million votes ahead of its more pro-China challenger, the Kuomintang party. This shows a strong shift toward pro-independence politicians.

Analysts now worry that Taiwan is headed for an extended period of tensions with China. Tsai’s government firmly opposes Chinese efforts to absorb the island nation back into political unity with the mainland. Meanwhile, China regards Taiwan as a part of its sovereign territory that needs to be reclaimed. To Chinese President Xi Jinping, the island is a renegade province that must be brought back under China’s sway.

Tsai’s landslide victory is largely attributed to the Hong Kong protests. The sight of a nation in similar danger of being devoured by China motivated the Taiwanese to stand up against foreign pressure.

Now, Taiwan is rallying around the Democratic Progressive Party and its promises of independence from China. Taiwan looks set to remain strongly opposed to unity with China. But will it last?

United States President Donald Trump has been a strong supporter of Taiwan. He became the first American president since 1979 to phone the leader of the country. In 2019, he signed major defense deals worth $10 billion that mainly covered upgrading Taiwan’s F-16 fighter jets to deal with current Chinese threats. By contrast, the Obama administration refused to provide any sort of aid.

Right now, times are looking good for Taiwan. But this will be temporary.

Taiwan will not remain independent. The U.S., historically Taiwan’s most important ally, is growing more isolationist. President Trump is already focused on the Middle East, and does not want a war on foreign soil. China will take bigger risks if the U.S. is distracted or if it believes the U.S. is unwilling to commit to a long struggle.

Taiwan needs strong U.S. support in order to stand against China. Otherwise it will effectively be standing alone.

This support, though currently strong, is beginning to decline. It will end with Taiwan returning to China’s orbit.

In 1998, Trumpet editor in chief Gerald Flurry wrote about how President Bill Clinton’s remarks on a trip to Taiwan betrayed the U.S.-Taiwan relationship. They revealed his willingness to give in to Chinese demands. This trend accelerated under the Obama administration. The Trump administration’s pro-Taiwan stance is only a brief reprieve in the collapse of American willpower abroad.

Many Taiwanese desire freedom and want to keep their distance from China. But this is not in their future. How could Mr. Flurry make such a weighty forecast with such confidence? He based it on Bible prophecy, which shows that China will be one of the “kings of the east” in the time right before Jesus Christ’s return (Revelation 16:12).

These kings of the east will be led by Russia, primarily, and China, as described in Ezekiel 38. The U.S. will be nowhere on the scene by the time this mighty power is formed. Prophecy discusses America losing its strategic sea gates (Deuteronomy 28:52) and the “pride of [its] power,” or will to fight (Leviticus 26:19). In the end, Taiwan will be assimilated into mainland China as part of this rising superpower.

To learn more about this rising Asian superpower and the future of America’s allies in the Pacific, order your free copy of Russia and China in Prophecy.