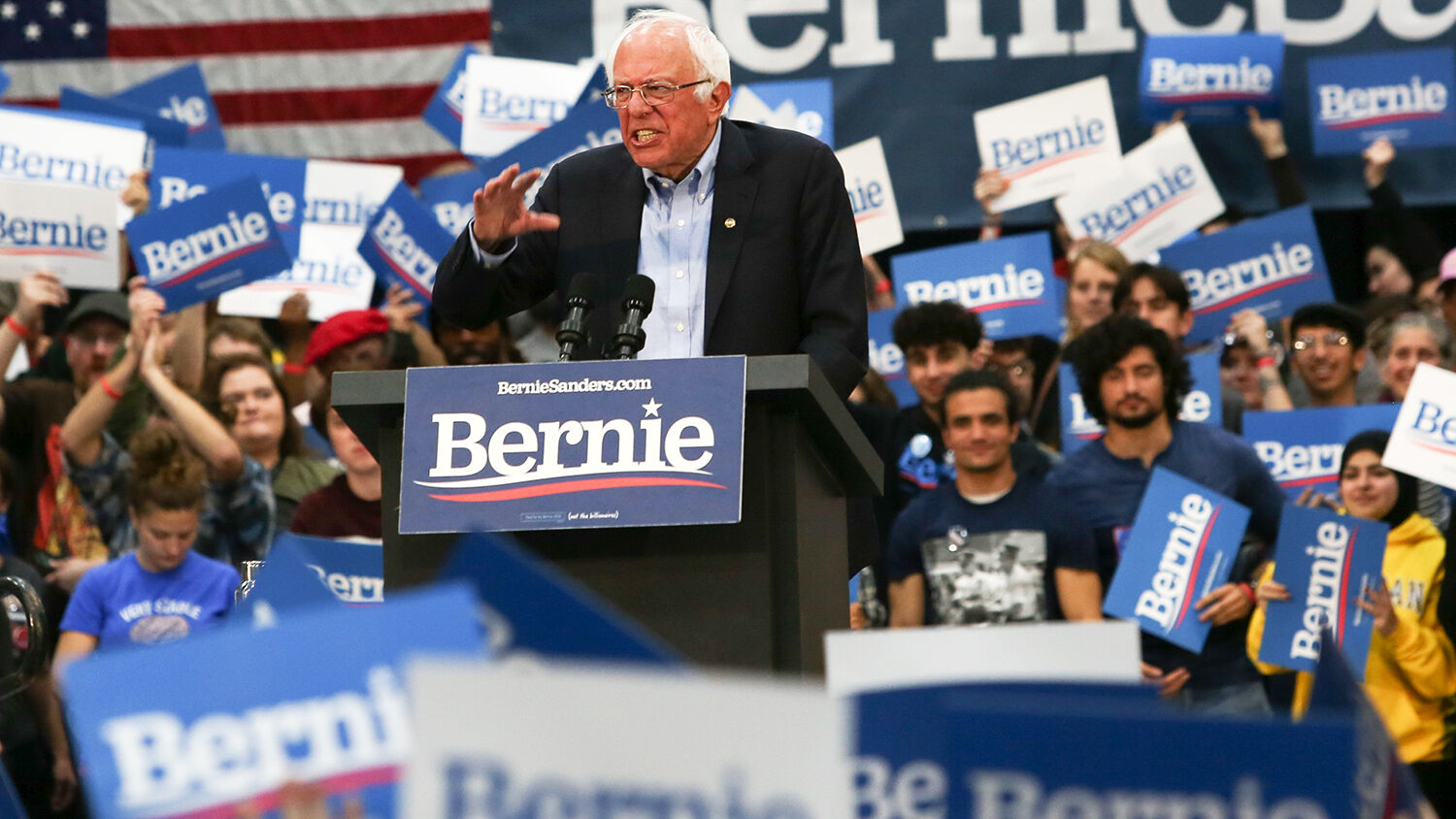 Bernie Sanders speaks during his political campaign ahead of the general election in Cass Technical High School in Detroit, Michigan, on Oct. 27, 2019.
Chirag Wakaskar/SOPA Images/LightRocket via Getty Images

Were the horrors of Stalinism a coincidental by-product of socialism? Or the inevitable consequence?

A campaign staffer for socialist presidential candidate Bernie Sanders has been caught on tape threatening that cities will “burn” if President Donald Trump is reelected. Investigators working for Project Veritas, an organization founded by James O’Keefe, have been secretly recording Iowa field organizer Kyle Jurek’s profanity-filled tirades for months. “The only thing that fascists understand is violence,” he said. “So the only way you can confront them is with violence.”

In another conversation, Jurek said that moderate Democrats should be put to death. “I’m ready to throw down,” he said. “Walk into that msnbc studios, drag [people] out by their hair, and light them on fire in the streets. Well, I’ll tell you what, in Cuba, what did they do to reactionaries? You want to fight against the revolution; you’re going to die.”

Jurek even suggested the use of prison camps to reeducate Trump supporters. “There’s a reason Joseph Stalin had gulags, right?” he said. “Actually, gulags were a lot better than what the cia has told us that they were. Like, people were actually paid a living wage in gulags; they had conjugal visits in gulags. Gulags were actually meant for, like, reeducation. Greatest way to breaking a … billionaire of their, like, privilege and the idea that they’re superior, go out and break rocks for 12 hours a day. You’re now a working-class person and you’re going to … learn what that means, right?”

And Jurek is far from the only Communist working for Bernie Sanders.

Winnie Wong and Claire Sandberg are senior figures in the Sanders campaign who traveled to Norway in 2017 to network with the Norwegian Red Party, which follows Mao Zedong’s version of communism. They also traveled to Germany in 2018 to network with Die Linke, a reincarnation of the East German Communist Party.

Becca Rast and Nick Martin are field directors for the Sanders campaign who, when they were in high school, founded a local branch of Students for a Democratic Society. This radical organization was cofounded by Bill Ayers, a Marxist terrorist who bombed the Pentagon in 1972 and befriended a young Barack Obama in 1995. Like Jurek, members of Ayers’s Weather Underground organization also thought conservatives needed to be killed or reeducated in prison camps. Federal Bureau of Investigation informant Larry Grathwohl infiltrated the Weather Underground and reported in 1982 that the organization estimated that it would have to kill 25 million people to establish communism in America.

Of course, people like Kyle Jurek and Bill Ayers represent the far-left fringe in American politics. Even though Jurek has stated that there are many more people like him working in the Sanders campaign, it is probably safe to assume that most Sanders supporters do not want to burn people alive in the streets and send the wealthy to prison camps.

Yet these so-called moderate Sanders supporters have not thought their ideology through to its logical conclusion. All told, Sanders’s socialist proposals would cost as much as $97.5 trillion over the next decade. That means total government spending would have to surge from 36 percent to 70 percent of the nation’s gross domestic product.

Even if you saddled every upper-class American with an 80 percent marginal tax rate, you would still need to collect an additional $66,000 from every household in the nation to afford these socialist proposals. People will not submit to this type of wealth confiscation willingly. It is going to take brute force to implement Bernie Sanders’s vision for America.

Former Communist spy Whittaker Chambers wrote that a willingness to commit acts of violence is what separates Communists from their socialist fellow travelers. “Have you the moral strength to take upon yourself the crimes of history so the man at last may close his chronicle of age-old, senseless suffering and replace it with purpose and a plan?” he asked in his book Witness. “The answer a man makes to this question is the difference between a Communist and those miscellaneous socialist, liberals, fellow travelers, unclassified progressives and men of goodwill, all of whom share a similar vision, but do not share the faith because they will not take upon themselves the penalties of the faith.”

There are millions of Americans who want a government that will confiscate 70 percent of the wealth produced by private citizens for use in government social programs. But what do you do with those who disagree with this plan? Agent Grathwohl sat in a room with 25 people, most of whom have graduate degrees from Columbia and other well-known educational centers, and listened as they discussed the logistics of killing 25 million people. Kyle Jurek says there are many people in the Sanders campaign today who acknowledge the need for prison camps.

Many people think that an event as violent as the Bolshevik Revolution could never happen in America. Yet a sobering prophecy in Ezekiel 5:12 reveals that one third of the population of end-time Israel (the United States and Britain, primarily) will die from the pestilence, famine and violence that will result from civil war. That equals more than 100 million deaths from rioting and warfare in the U.S. (Request our free book Ezekiel: The End-Time Prophet for proof.)

How could a dramatic prophecy like this be fulfilled? How could the most powerful and prosperous nation in human history fall into such a terrible fate as this?

Today, socialism is gathering strength. What people don’t understand about “democratic socialism” is that its aim of socialism in the U.S. is to overthrow its constitutional form of government—by violence if necessary.

Socialists usually downplay this, but the protests and riots occurring across America today are not really against President Donald Trump; they are against the constitutional system of government he leads. To learn more about how prophecies from Ezekiel and other biblical books apply to America, read “Communism in America Today,” by Gerald Flurry.