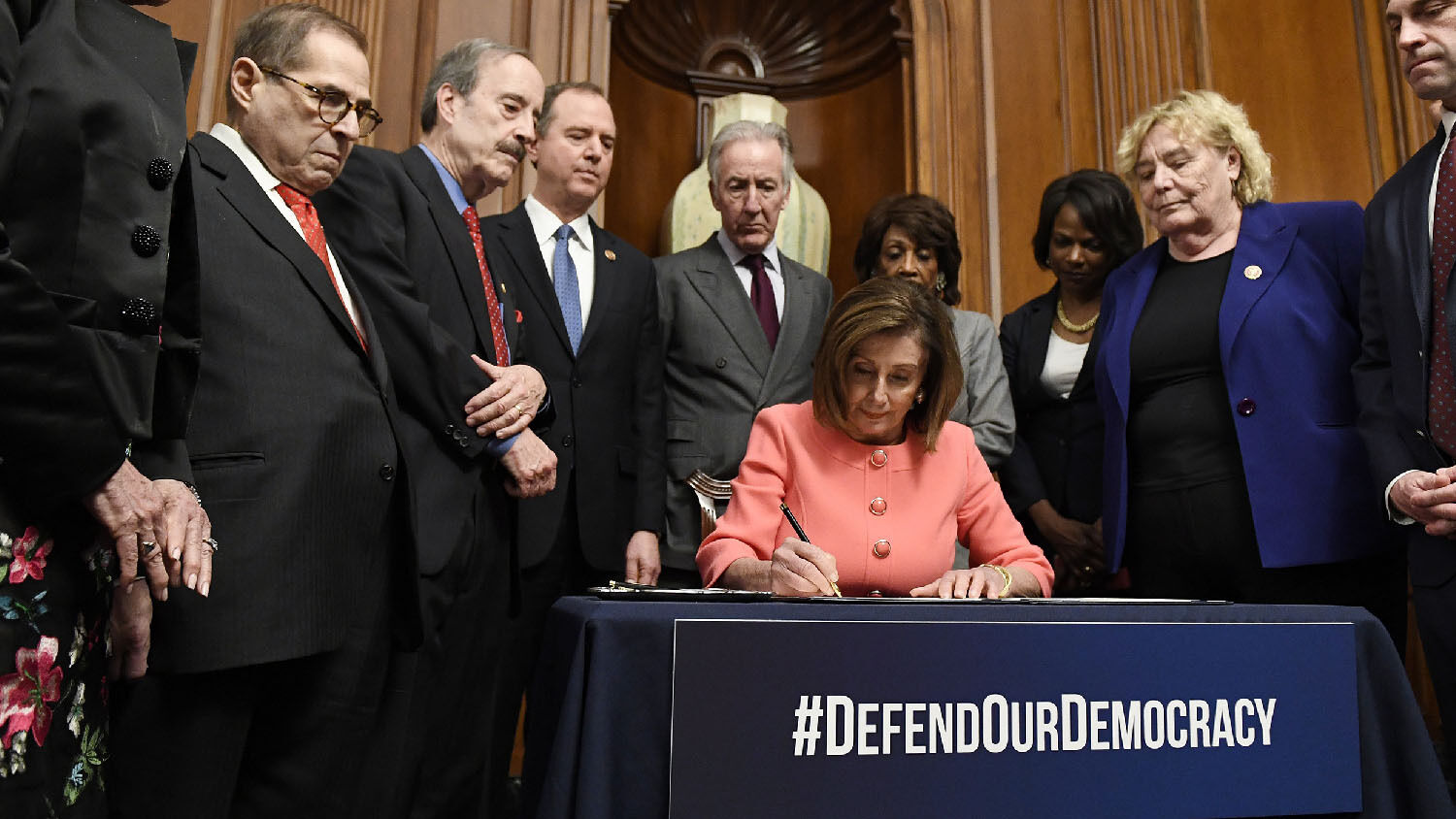 Speaker of the House Nancy Pelosi, signs the articles of impeachment during an engrossment ceremony before taking them over to the Senate on Wednesday, January 15, 2020.
Caroline Brehman/CQ-Roll Call, Inc via Getty Images

“Time will prove this to be a deadly curse on the United States!”

Trumpet editor in chief Gerald Flurry wrote that statement in November 2006, following a dramatic midterm election in which the Democrats won a strong majority in the House of Representatives and Nancy Pelosi became speaker of the House.

Today, 13 years later, Speaker Pelosi finally sent the articles of impeachment to the Senate, beginning the next battle in the radical left’s war to bring down America’s president. She held onto the articles for weeks, hoping to pressure Senate Majority Leader Mitch McConnell to compromise with Democrats in conducting the Senate trial. But Leader McConnell didn’t budge. Like most Americans, he knows the impeachment articles are as weak and worthless as the now infamous Steele dossier.

In that 2006 article, Mr. Flurry warned that the midterm election and the rise of Pelosi were a landmark moment for America that “changed American politics forever.” At the time, this seemed to many to be a pretty extreme observation; to be sure, it was a daring forecast.

This prophecy was fulfilled today—and it is being fulfilled every day Ms. Pelosi and her colleagues show up for work!

The scale of irrationality and absurdity now being exhibited by Speaker Pelosi, many House Democrats, and radical leftist media is incomprehensible to most people. There is only one explanation for such an outright rejection of evidence and facts, for such abhorrence of protocol, traditions, institutions and the American Constitution: The source of this behavior is deep hatred. But they don’t just hate Donald Trump, or even Trump supporters; they hate Judeo-Christian America, its history, and many of its traditions and institutions.

Some today consider Nancy Pelosi a calm, steadying force in the Democratic Party. Some say she is keeping a lid on the more extreme, radical representatives. (Who can forget her hastily “shushing” an eruption of applause when the House officially passed impeachment articles in mid-December?) Many believe Pelosi was forced against her will to undertake impeachment, that radicals in “the Squad” bullied her into it, and that her heart isn’t really in it.

This is all wrong.

Today it is plain that the Democratic Party in Congress is far more radical than it was in 2006, when Nancy Pelosi became speaker. The congresswoman might be a long-time “establishment” Democrat and a dominant figure in the House, but she is no moderate and has never been a bulwark against radicalism. The party, as the Atlantic admitted last spring, has moved left, “where Pelosi has been all along.”

The Democratic Party hasn’t accidentally slid into leftist radicalism against the wishes of its speaker; it has been deliberately transformed by Nancy Pelosi!

Some say that Pelosi is nothing like newer congressional Democrats like Ilhan Omar, Rashida Tlaib or Alexandria Ocasio-Cortez. The truth is, these extremist congresswomen are amateurs and Pelosi is a pro; they all have the same radical leftist dna!

Elected as House minority leader in 2002 and speaker in 2006, Ms. Pelosi has been outspoken and unapologetic about her “San Francisco values.” Compared to her younger colleagues, she is shrewder and has been around long enough to know that many Americans do not respond willingly to sudden, dramatic, revolutionary change. The same is true for her political ally, Barack Obama. This community organizer warned the Democrats two months ago about appearing to move too far to the left. “Even as we push the envelope and we are bold in our vision, we also have to be rooted in reality,” Mr. Obama said. “The average American doesn’t think we have to completely tear down the system and remake it.”

Pelosi often appears poised and fair-minded, especially compared to the strident behavior of the Squad. But she has captained the Democratic Party in Congress for 13 years. Its transformation into a lawless, intensely secular, anti-American, tradition-hating, well-nigh Communist political party has occurred under her stewardship.

This woman, and the extremist agenda she embodies and advances, have become a “deadly curse” to America, exactly as Mr. Flurry said 13 years ago.

Recall what he wrote in that article (emphasis added):

The new speaker of the House is a Democrat from San Francisco, Nancy Pelosi. This liberal woman, who is now second in line for the presidency after Vice President Dick Cheney, is pro-abortion and pro-homosexual marriage; she wants to allocate federal spending for stem-cell research, which involves experimenting on unborn babies.

Democrats are excited by the fact that “San Francisco values” now echo through Washington’s halls. Is this what America needs? Prior to the elections, one newspaper stated, “If Democrats win, Minority Leader Nancy Pelosi will be speaker and her far-left San Francisco values—gay marriage, cutting and running from Iraq, coddling terrorists, raising taxes, amnesty for illegals—will become the House agenda” (Augusta Chronicle, Oct. 28, 2006). San Francisco values will now permeate every major decision made by the American government.

And they have, with enormous success. Today Nancy Pelosi’s “San Francisco values” are no longer confined to the House, or seen as controversial at all. Homosexual “marriage” is now legal nationwide and accepted even by Republicans. The battle is now over the transgender agenda, over which Republicans are basically in an orderly retreat.

Since her election, Pelosi has played a major role in seeding those values. Now, she is working to take down the democratically elected president of the United States in an impeachment trial based on hearsay and what Attorney General William Barr terms “divined” motives.

Iranian Supreme Leader Ayatollah Ali Khamenei actually celebrated the outcome of the 2006 midterm elections. He said the election of Democrats was an “obvious victory for the Iranian nation”! The reason for such sentiments have become clear some 13 years on, with President Obama saving Iran from sanctions, sending the nation huge amounts of cash, and negotiating the infamous Iran nuclear deal. Now the Democratic Party is virtually mourning the killing of the world’s worst terrorist, Qassem Suleimani. Many think of this murderer more positively than they do President Donald Trump!

Mr. Flurry continued—again, 13 years ago—by writing: “We are in a war against terrorism, and top terrorist leaders are rejoicing and celebrating with the Democrats.” Over the past two weeks, we have seen Democratic figures openly sympathizing with Iran’s genocidal ayatollah.

What has happened to America’s Democratic Party? Why have they become so radical? What has happened to America? You need to read this article from Mr. Flurry: “Midterm Elections—A Disaster for America.” It is even more pertinent today than it was 13 years ago! This article shows how the political crises besieging America today were prophesied some 2,700 years ago in a stunning biblical passage that goes so far as to highlight the false appropriation of the term “liberals.”

This article, together with our free booklet America Under Attack, explains what happened today in Washington, d.c. This literature shows that Nancy Pelosi’s actions today, and her political arrival as House speaker in November 2006, were no accident. It explains the source of the extreme hate coursing through the Democratic Party.

And it explains how Trumpet editor in chief Gerald Flurry was able to prophesy this exact moment 13 years ago.