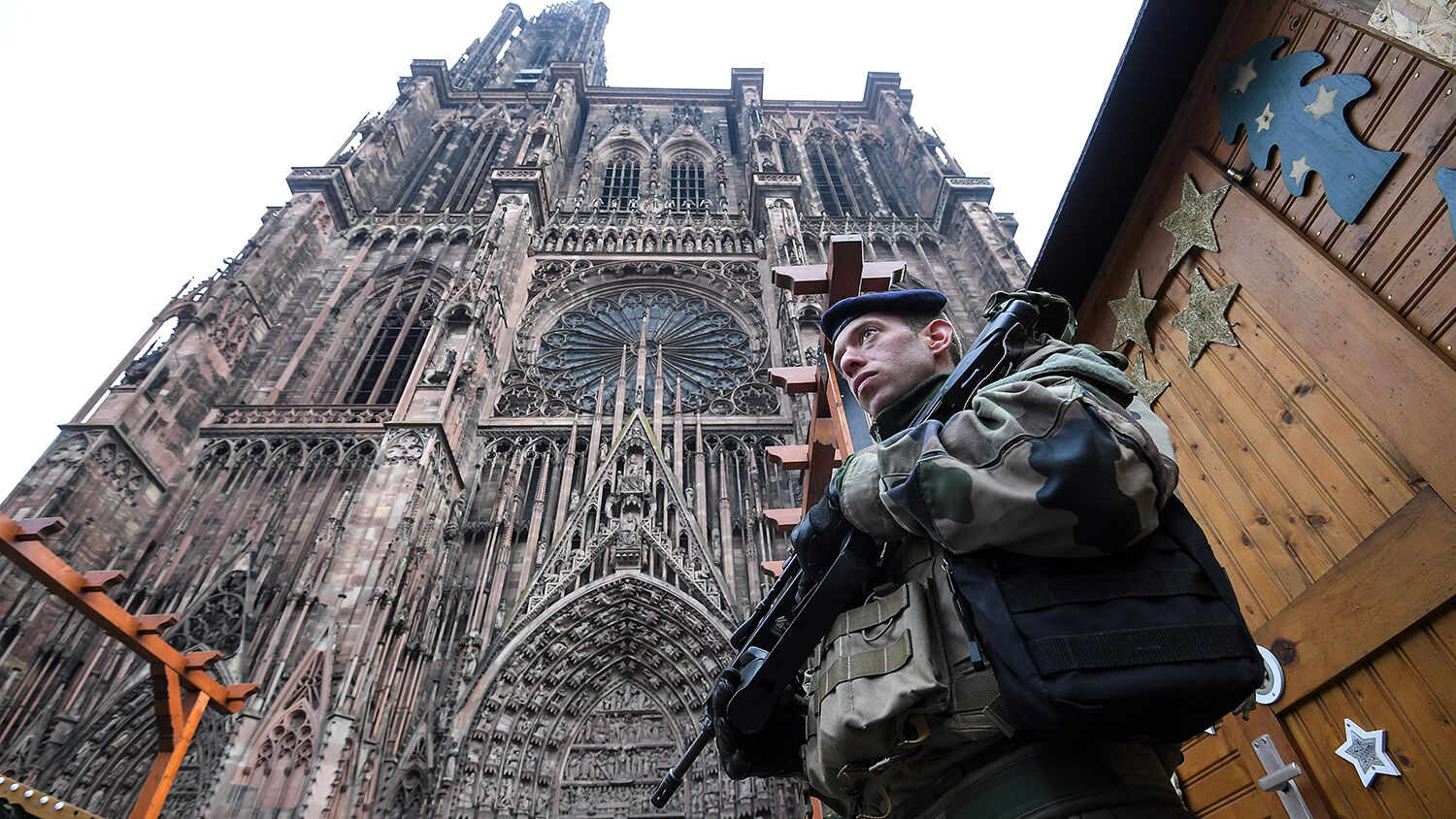 French soldiers stand guard at the Christmas market in front of the cathedral in Strasbourg, France, on Dec. 12, 2018, as policemen search for the gunman who opened fire near a Christmas market the night before.
PATRICK HERTZOG/AFP via Getty Images

More Europeans are seeing the need to defend the Continent’s Christian heritage.

Attacks on Christian sites in Europe hit an all-time high in 2019, according to research conducted by Gatestone Institute and published January 1.

The vast majority of attacks hit France and Germany and were acts of vandalism. Islam-inspired attacks were fewer but noticed nevertheless. Gatestone noted that many of the attacks showed “a deep-seated hostility toward Christianity.”

The crimes were perpetrated by a wide range of people. However, they were all an attack on Europe’s Christian roots. And they all galvanized Europeans to defend their heritage more strongly.

Data from the French Interior Ministry show that attacks on Christian sites have increased by 245 percent between 2008 and 2016. They accounted for 90 percent of all attacks on religious sites.

In many cases, especially of vandalism, the culprit is never caught. Therefore, it is impossible to say exactly how many of the attacks were motivated by Islam. However, a number of attacks have involved verses from the Koran being inscribed on church walls, or shouts of “Allahu akbar!” from a violent attacker.

Many are also the work of delinquents or anti-religious anarchists. Whatever the causes, the attacks are providing motivation for Europeans to support and protect their Christian heritage.

After the church of St. Denis in Paris was vandalized, Annie Genevard, a French member of parliament for the center-right Les Republicains (Republicans) party, denounced the attacks on Europe’s Christian sites as an assault against Europe’s historical and cultural identity. Consider her statement to Le Figaro:

Saint Denis is not only a place of Christian worship, it is the necropolis of the kings of France! It is a meeting place between our national history and our Christian roots. That one dares to attack this monument is really shocking not only for Christians but for many citizens, whatever their convictions. When an anti-Christian act is committed, we turn our backs on the history of France, which has an intimate connection with the Christian religion.

To attack a Christian tomb or a church, whatever the motivation of the author, is a way to attack one part of our collective identity, because Christianity and its monuments have shaped our culture, our history and our landscapes. Seeking to destroy or damage Christian buildings is a way of “wiping the slate clean” of the past. …

More Europeans are coming to this realization: Any civilization that fails to safeguard its history will be lost. Guarding history requires concrete action.

Even when an attack on a church is not motivated by radical Islam, the results are similar: Europeans are confronted with the need to guard their heritage.

Though most in France are not religious, France is still, at heart, “a Judeo-Christian country,” said the mayor of Saint-Éloy-les-Mines, France, speaking to the Observatory of Christianophobia.

French bishop Dominique Rey told Italian magazine Il Timone on Aug. 5, 2019, that “evangelization is more urgent than ever” in order to counteract the decline of Christianity and the rising tide of Islamic culture. Now Europe must “find a common base of values” and “restore centrality to its Christian roots,” he added.

Open hatred against Christian sites is pushing Europeans to ask hard questions about their Christian values. Should those values be more protected? If so, how do governments go about doing so in a secular society?

Europe will ultimately answer these questions in a way few expect.

As the migrant crisis developed, defending Europe’s identity became a political question. European Commission President Ursula von der Leyen recently went so far as to create a commissioner portfolio for “protecting our European way of life.” This prompted backlash and the name was soon changed to “promoting our European way of life.” Yet the intent had already become clear. Europe’s identity needs protection.

Ultimately, Europeans will look to their Christian history to achieve this.

An October 2018 article by Trumpet editor in chief Gerald Flurry, “The Holy Roman Empire Goes Public—Big Time!”, drew attention to this trend. He warned that rising numbers of immigrants, bringing with them a different way of life, would prompt a revival of European Christian heritage. He wrote:

A clash between Islam and Christianity may seem like a Crusade-era relic of medieval times. But to say that these same tensions could not boil over in modern times is to ignore centuries of history, as well as current trends.

Mr. Flurry wrote about Europe’s return to its Christian roots because of specific Bible prophecies. Daniel 11:40 and Revelation 17:3 and 12 foretell a 10-nation European superpower guided and temporarily unified by a church, symbolized throughout the Bible by a woman.

As our free booklet The King of the South explains, this power will come into direct confrontation with its historical enemy, radical Islam, led by Iran.

It may seem impossible after decades of relative peace, but the world you live in is prophesied to change dramatically in a short period of time. Watch Europe’s return to its Christian cultural roots. It’s another indicator of fulfilled prophecy.