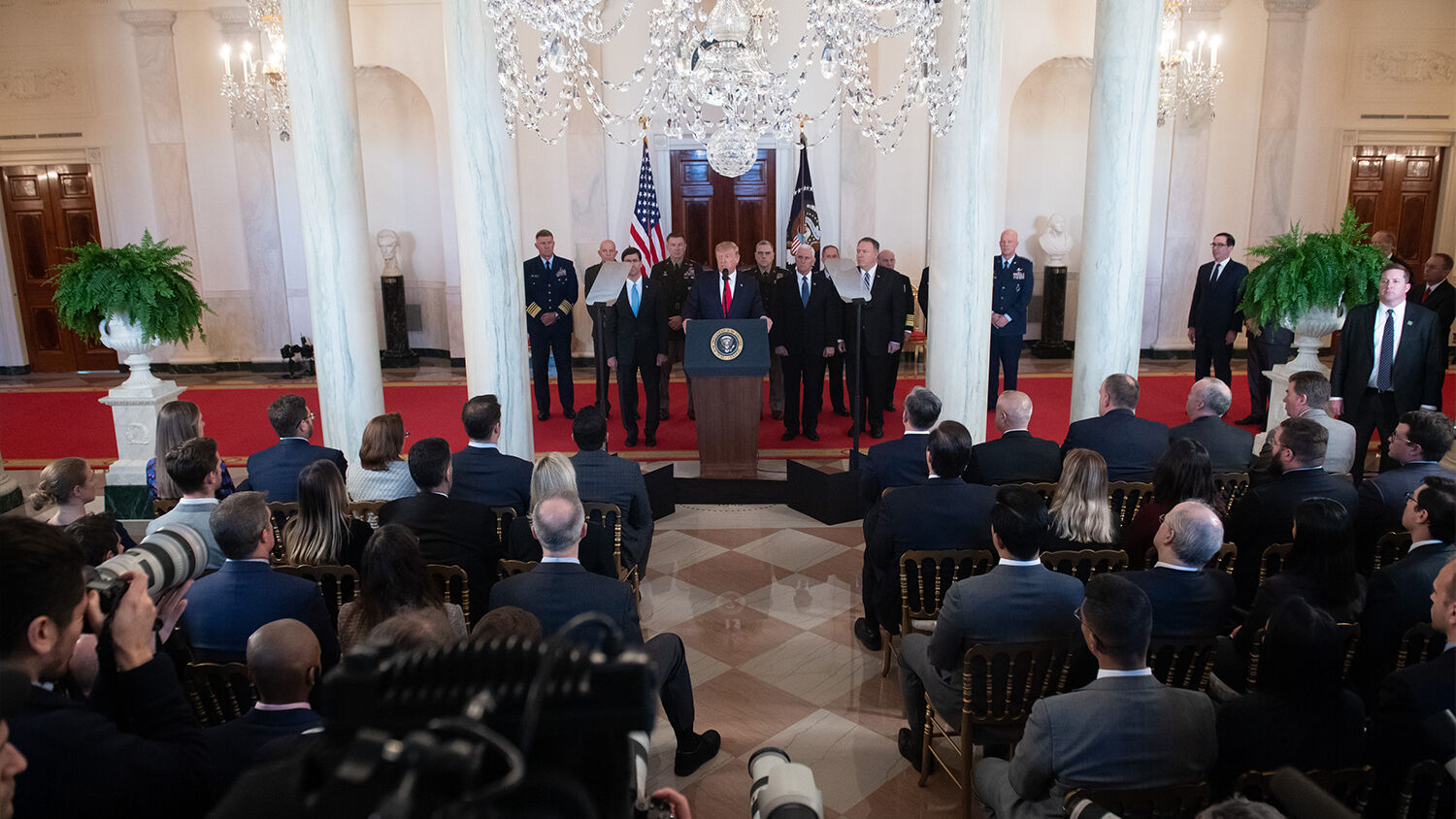 U.S. President Donald Trump speaks about in the Grand Foyer of the White House in Washington, DC, January 8, 2020.
SAUL LOEB/AFP via Getty Images

The division in Washington today reveals Iagos, Othellos and our own political tragedy.

Watching recent antagonism and vitriol in American politics and the press against the president reminds me of William Shakespeare’s Othello.

Othello is a great general who has just married Desdemona and appointed Cassio as his lieutenant. Othello’s standard-bearer is Iago.

Things begin to go awry when Cassio gets drunk at a party and commits an indiscretion, causing Othello to demote him from being lieutenant. Soon after, Othello begins to hear things about his new wife that concern him. Iago reluctantly reveals that he has some suspicions, but he says he doubts his own perceptions and is loath to share them. But this is about his wife, so Othello convinces Iago to speak up. Humble Iago, emphasizing his devotion to Othello, lays out his case, piece by piece, concluding that Desdemona and Cassio are committing adultery behind Othello’s back.

Could it be true? Desdemona seems so loyal and faithful. The idea that she would be so treacherous is nonsense. But it rattles Othello’s mind. Then she begins to petition Othello to reinstate Cassio. This strengthens the notion to Othello that she and Cassio are guilty.

Tormented, Othello angrily demands “ocular proof” from Iago of his accusation. Tragically, Iago produces it: A special handkerchief that Othello had given Desdemona is found in the chamber of Cassio.

Step by painful step, the story leads to the fateful conclusion. Enraged that his wife could feign such devotion to him and yet be committing adultery with one of his officers, Othello finally murders her.

The great tragedy, though, is that Desdemona was faithful. She was completely devoted to Othello from beginning to end. She and Cassio never had any romance at all. Her petitions on Cassio’s behalf were innocent and pure—and prompted by Iago.

The truth is that, from the first scene, this tragedy was all planned by Iago. His observations were lies, his insinuations were slanders, his proofs were forgeries, and his humility and devotion were deceits. Jealous of Cassio, hateful to Othello, and willing to destroy lives to satisfy his own ambition and vengeance, he intentionally, craftily, subtly poisoned Othello’s thinking.

I take two main lessons from this play that are relevant to the tragedy unfolding in American politics today.

The first lesson is the appalling damage that can be done by a lying, two-faced, unscrupulous villain. Washington well shows us that the perverse destruction wrought by Iago is not confined to fiction.

The Iago character is essentially the devil. Jesus Christ said “he is a liar, and the father of it.” He is willing to do anything to accomplish his evil purposes. He will lie, cheat, steal, destroy reputations and murder, all while appearing to be harmless, impartial, kind, virtuous and peaceful: an “angel of light” (2 Corinthians 11:14). “When devils will the blackest sins put on, // They do suggest at first with heavenly shows, // As I do now,” Iago says. Motivated only by his own sinister self-interest, an Iago will willingly destroy anyone who, knowingly or unknowingly, happens to impede his ambitions. Someone operating without restraint in this way is terribly destructive!

Trumpet editor in chief Gerald Flurry’s Key of David program this last weekend, “The Hidden Antiochus,” is about this very thing. In this deep and deeply worthwhile program, Mr. Flurry talks about the 175 b.c. Seleucid king Antiochus Epiphanes, one of the worst villains in Jewish history. Antiochus sought to stamp out the faith of the Jews over whom he ruled. He pursued this plot through deceit, then through coercion and violence.

Mr. Flurry showed that Daniel 8 uses this history to prophesy end-time events. A type of Antiochus rose to power within God’s own Church and has worked to destroy the faith of its people. Daniel 8 also prophesies of an end-time Antiochus who leads Europe to wreak great destruction. Beyond that, Mr. Flurry showed, there has been an Antiochus within America working to destroy what is left of the nation’s rule of law, morals and strength.

This Antiochus deceives, pretends to be something he isn’t, presents himself as smooth, attractive, flattering, patriotic. He comes as an angel of light, but he is subverting and poisoning the nation.

That has happened in America. An individual has already fulfilled much of this destructive role. He still leads a growing movement that operates in the spirit of Antiochus and continues to wreak a horrifying amount of damage.

You must understand the devil to grasp the scale of what is happening. As the apostle said, being “ignorant of [Satan’s] devices” enables him to “get an advantage of us” (2 Corinthians 2:11).

The character of Iago perfectly depicts this spirit at work in American politics today. There are unquestionably people with an ambition to destroy the state and destroy lives to accomplish their goals. Lying, cheating, deceit, duplicity, violence: virtually nothing is off the table. This brutal reality is being exposed more and more, if you are paying attention.

The second lesson I take from Othello is the danger in faulty preconceptions.

Mistaken assumptions about Satan and his methods are deadly! If you are ignorant of Satan’s devices, ignorant to the workings of an Iago or an Antiochus, you will be deceived and you will become his victim. As the Trumpet so often emphasizes, the inexplicable troubles besieging this country are completely explainable once you realize that the spirit world is real and active. We are trying to help you see this invisible enemy.

Othello is unwise to Iago’s deceit, and is thus susceptible to suggestion and insinuation. Once he becomes convinced of his innocent wife’s betrayal, then everything he sees serves to confirm it. Even his own mind begins to manufacture evidence proving his suspicions. His wife’s most innocuous words and acts become convicting evidence of her supposed villainy. Iago observes: “Trifles light as air // Are to the jealous confirmations strong // As proofs of holy writ.”

This tragically illustrates the danger of confirmation bias, the tendency to process information by looking for, favoring and interpreting information that affirms one’s existing beliefs. In other words, your preconceptions shape your perception. It can lead to your seeing crimes that are not there. You work yourself into a frenzy over things that are imaginary.

This is playing out in grand fashion in American politics today.

There are definitely, unquestionably some Iagos at work. Some people are deliberately, subtly, strategically telling lies and poisoning the air with false stories just to bring their enemies down and accomplish their own evil political ends at any cost.

But there are also many Othellos. Many Americans are buying into these lies, allowing themselves to be influenced by disinformation. And now their own imaginations are concocting evidence of criminality where none exists. Everything they see confirms the fictional treachery of which they have convinced themselves.

Viewed through this distorting lens, the killing last week of Iranian Gen. Qassem Sulimani—the world’s most dangerous terrorist mastermind—becomes a reckless mistake, the unjust murder of a beloved military hero—or, at best, as one msnbc commentator bizarrely expressed it, “Right decision, wrong commander in chief.” Even when President Donald Trump is right, he’s wrong! To those who are looking through this lens, no amount of exculpatory evidence can convince them the president isn’t guilty of collusion with the Russians, or being Putin’s stooge, or blowing a dog whistle to rally white supremacists to undertake the genocide of black people—or any number of other crimes and sins that are, in fact, contrivances of their imagination.

It seems that once someone goes down this path far enough, it can be nearly impossible to open his eyes to the truth.

As Shakespeare indicated, it can lead to the most tragic, perverse and grievous of outcomes.

How will America’s story end? The spirit of Iago, of Antiochus—of the devil—is strong. More and more people are becoming dangerously influenced by it.

I saw a video the other day of a conservative student at a college campus. He sat at a table with a sign at a public square advertising his views. Another student told him to take his sign down and get out, because he was “inciting violence.” The first student said he wasn’t inciting violence, he was just exercising his freedom of speech to state his political views. The “you’re inciting violence” student suddenly punched him in the face. I’m sure this violent student felt perfectly justified in his own mind, coldcocking someone for the sake of “preserving peace.”

But Satan influences us in more subtle ways too. It doesn’t start with the blatant hypocrisy of this student, or the obviously twisted reasoning of an msnbc commentator. It starts small: Just ask Iago.

Recognize that Satan is playing human nature to sow division and hatred within America. Prophecy says it will get far worse. And the story we are writing as a nation is turning into a genuine tragedy.