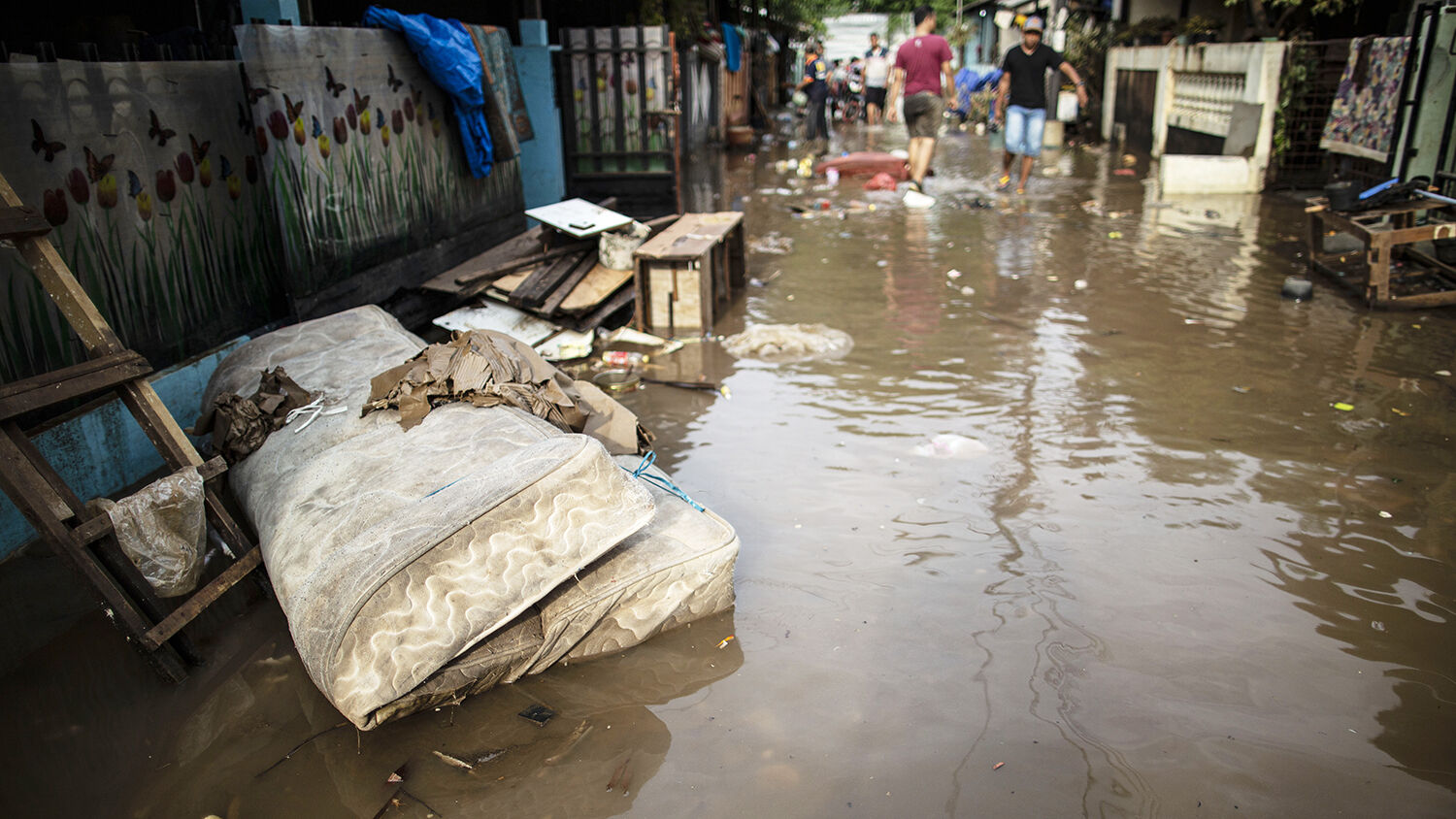 Flooding in the streets of Tangerang City, Indonesia, on January 3
Donal Husni/NurPhoto via Getty Images

A little-noticed region of the world raises a vital question about the weather.

Typhoons and floods have battered Southeast Asia in recent weeks, leading to major displacement, damage to infrastructure, disease and many deaths. The main nations affected have been the Philippines, Indonesia and Samoa. What has caused this? Climate change or something not currently being addressed?

While the world’s attention is on wildfires consuming chunks of Australia, few have noted the deluge hitting Asian nations.

In the Philippines, 2.8 million people have been affected in the Visayas region by Typhoon Phanfone, which made landfall over two weeks ago. According to Reliefweb, 133,000 were still displaced as of January 6. The floods damaged a total of 2,900 villages, with the number of homes reported as destroyed increasing every day.

Thousands of people in the Philippines are experiencing a wet and gloomy Christmas after Typhoon Phanfone brought heavy rains, strong winds and flash floods to the region. https://t.co/qJRuX97nUU pic.twitter.com/rep6jWJirT

A similar problem afflicts Indonesia, where monsoon rains were heavier than expected. Since December 31, the rains have displaced thousands of people: 100,000 as of January 5. Disaster management authorities reported 67 dead as of January 6. Close to 1,500 homes have been damaged. Major public infrastructure has also been severely damaged, including 24 bridges.

WATCH: Monsoon rains cause severe flooding and landslides in parts of Indonesia, leaving thousands of people in temporary shelters. pic.twitter.com/CGyZoyOpr5

Diseases are also sweeping through Southeast Asia. A measles outbreak, which began early in 2019 in the Philippines, reached Samoa in September. The Samoan government declared a state of emergency in November, which lasted six weeks, until December 28. Since the beginning of the outbreak, 83 people have died and 1,860 have been admitted to hospital.

What causes such major disasters, and can they be avoided?

Many blame climate change, a major theme of 2019. Most of those who look to religion for answers were unable to explain why a loving God would allow such devastating disasters and human suffering.

Most Christian religions teach that there is a desperate competition between God and Satan to save humanity at the present time. The Bible disagrees. This is not God’s world, and it is not, at present, ruled by a loving God.

Paul identified “the god of this world” as Satan the devil (2 Corinthians 4:4). The Bible reveals that Satan has deceived the entire world, hiding the real causes of human suffering (Revelation 12:9).

In the Garden of Eden, God offered Adam and Eve access to the way that would lead to physical blessings and protection, in addition to spiritual truth and eternal life. This was symbolized by the tree of life.

But mankind rejected that way and chose the way of the deceiver, Satan the devil. So God cut off Adam and Eve and their descendants from Him and His blessings.

In his book Mystery of the Ages, educator, minister and founder of the Plain Truth magazine Herbert W. Armstrong explained how the events of the Garden of Eden laid the foundation for the world we live in today. He wrote:

God said, in effect: “You have made the decision for yourself and the world that shall spring from you. You have rejected me as the basic source of knowledge ….

“Go, therefore, Adam, and all your progeny that shall form the world, produce your own fund of knowledge. Decide for yourself what is good and what is evil. Produce your own educational systems and means of disseminating knowledge, as your god Satan shall mislead you. Form your own concepts of what is god, your own religions, your own governments, your own lifestyles and forms of society and civilization. In all this Satan will deceive your world with his attitude of self-centeredness—with vanity, lust and greed, jealousy and envy, competition and strife and violence and wars, rebellion against me and my law of love.”

The weather disasters of today are not “natural.” Though mankind has certainly polluted parts of the Earth in terrible ways, the majority of weather disasters are the result of sin. Our article “Why the Trumpet Watches Increased ‘Natural’ and Weather Disasters” explains, “God allows mankind to reap the consequences of pollution and other physical sins. But He also intervenes in the weather to punish mankind for its spiritual sins.”

Sin brings punishment. But God promises protection for those who choose to change and live according to His way: “If ye walk in my statutes, and keep my commandments, and do them; Then I will give you rain in due season, and the land shall yield her increase, and the trees of the field shall yield their fruit” (Leviticus 26:3-4).

Satan is very real, but he cannot go beyond what God will allow. At the return of Jesus Christ, Satan’s power of deception over this world will be ended.

You can take action now to understand and avoid the suffering around you. To find out how you can gain peace of mind and assurance in a world of ever worsening disasters, order a free copy of our booklet Why ‘Natural’ Disasters?