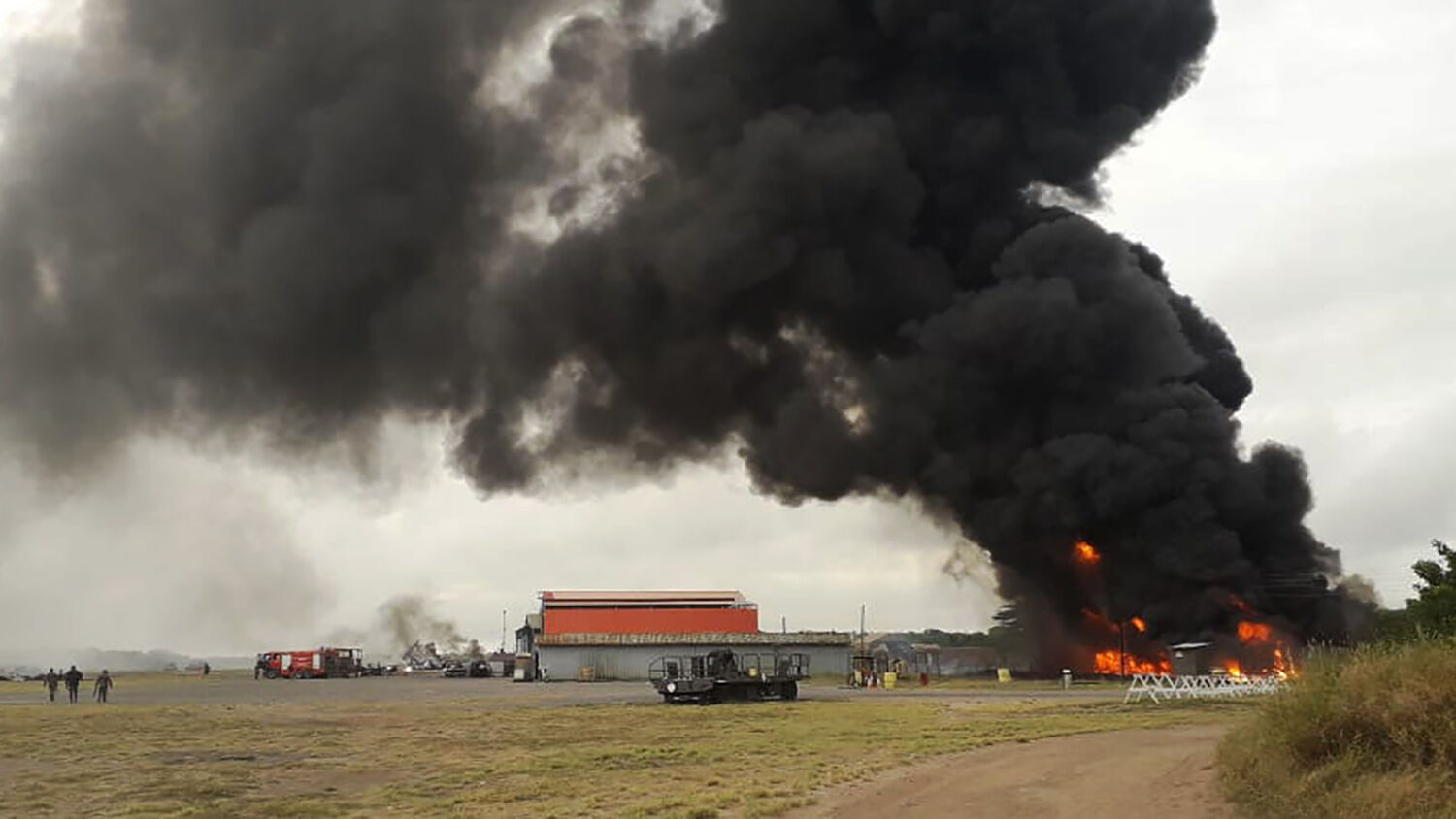 Smoke rises from a U.S. millitary base in Lamu County, Kenya, on January 5.
Xinhua/Xin Huashefa via Getty Images

Iran’s ploy to control the Horn of Africa

Al Qaeda-linked terrorists conducted their first attack against a United States base in Kenya on Sunday, resulting in the death of three Americans.

Militants from the al-Shabaab group attacked the Manda Bay Airfield in Kenya, killing an American service member and two Pentagon contractors. According to the U.S. Africa Command statement released on Twitter, two other Americans were wounded and six aircraft were damaged in the predawn attack.

U.S. Secretary of Defense @EsperDoD expresses condolences to the families of the three Americans killed in Manda Bay, Kenya. https://t.co/dGkcCmF288

According to Geopolitical Futures, “[Al-Shabaab] claimed that it attacked the military base for the sake of ‘al-Quds’ (Jerusalem), which is similar rhetoric to that used by the Iranians to legitimize previous operations of Suleimani.”

This attack followed an al-Shabaab bombing in Mogadishu, Somalia, last month, which killed at least 85 people and injured nearly twice as many. A similar attack in 2017 killed almost 600 people. Significantly, it also came the day after the U.S. assassination of Quds Force Cmdr. Qassem Suleimani and the appointment of his successor, Ismail Qaani. The attack appears to have been hastily organized and poorly executed, as if done in a rush. Though evidence is circumstantial, this seems to indicate that the attack was retribution for Suleimani’s death.

The new Quds Force commander has a background in counterintelligence and is experienced in staying out of the media spotlight. Similarly, this attack, which killed three Americans, went largely uncovered in media while the focus remained on the Middle East and the death of one American.

“Many Americans and members of Congress ask why the U.S. is still fighting terrorism in Africa—in the Horn and against Boko Haram in West Africa,” wrote the Wall Street Journal. “Reports occasionally emerge that the Trump administration is questioning the commitment.”

Al-Shabaab is an al Qaeda-linked terrorist organization seeking to establish a self-governed Islamic state in East Africa. In 2008, it was declared a Foreign Terrorist Organization by the United States government. Al-Shabaab militants are believed to have received training in Afghanistan about waging asymmetric and surprise warfare. In the past, the group has also shown that it is willing to attack larger forces than its own and has expressed its intent to attack the U.S. homeland and its citizens.

Somalia hasn’t had an effective national government for more than 20 years, and much of the country is an ongoing war zone. Al-Shabaab has tried to seize control of the government, gaining control of as much as 40 percent of Somalia in 2011. It was forced out of Mogadishu in 2011 and out of the vital port of Kismayo in 2012; since then, the group has relied heavily on the lucrative charcoal trade and the tolls and taxes it collects at various checkpoints throughout the country.

This group of radical terrorists follows the Wahhabi branch of Islam, which is typically opposed to the Shiite branch of Islam. Iran is predominantly a Shiite nation. Despite these differences, however, Iran supports and occasionally works with al-Shabaab. There is a functioning relationship between the two.

The Horn of Africa’s primary importance to Iran is to help exert control over the vital Red Sea shipping lane. An estimated 4.8 million barrels per day of crude oil and refined petroleum flowed through this strait in 2016 toward Europe, the United States and Asia.

In Libya and Ethiopia in Prophecy, Trumpet editor in chief Gerald Flurry described how Iran is using al-Shabaab to gain control of this vital shipping lane:

In addition to the radical Islamist problem festering inside its borders and the growing threat from Eritrea, Ethiopia is under increasing threat from the radical Islamist presence in Somalia. Mogadishu’s Transitional Federal Government is frail and politically immature, two issues made worse by the fact that it is under near-constant attack from al-Shabaab and its regional supporters, including Iran. Ethiopia’s border with Somalia is nearly 1,000 miles long, and the risk of the Islamist war spilling over into Ethiopia is real, which is why Ethiopia supports the tfg. By doing so, however, Ethiopia risks becoming a target of al-Shabaab and its radical Islamist partners. …

No matter what angle you view it from, the picture is the same: Ethiopia is under extreme pressure to come under the influence of radical Islam!

Much of Europe’s trade with Africa, Asia and the Middle East travels through the Red Sea. Bible prophecy indicates that Iran is about to gain control of this vital shipping lane as a means of threatening Europe.

Daniel 11:40 says: “And at the time of the end shall the king of the south push at him: and the king of the north [a German-led European Union] shall come against him like a whirlwind, with chariots, and with horsemen, and with many ships; and he shall enter into the countries, and shall overflow and pass over.”

For years, the Trumpet has identified the king of the south as radical Islam, led by Iran. Today, Iran is an extremely pushy and aggressive nation. This has become increasingly more obvious over the last few weeks and months as it is becoming bolder and bolder in its willingness to attack foreign entities.

Daniel 11:42-43 describe Iran’s strategy to gain control of the Red Sea. The verses describe Iran as having some form of control over the nations of Egypt, Libya and Ethiopia. Biblically, the term Ethiopia is likely referring to the Horn of Africa region.

Today, all three nations have strong radical Islamic communities, which Iran is working with. An article by Egypt Today announced the possibility of the Muslim Brotherhood reappearing in Sudan, a nearby neighbor of Ethiopia, which looks poised to collapse as a result of internal ethnic and religious division.

Radical Islam is active in the region, and this attack by al-Shabaab, whether coordinated by Iran or not, shows this is true. As Iran recovers from the death of Qassem Suleimani and its newly appointed commander takes the helm, watch for Iran to increasingly push its way into Africa.

For more information, request Libya and Ethiopia in Prophecy, by Gerald Flurry.