Some boast that divorce rates are plummeting. Not so for the senior set! 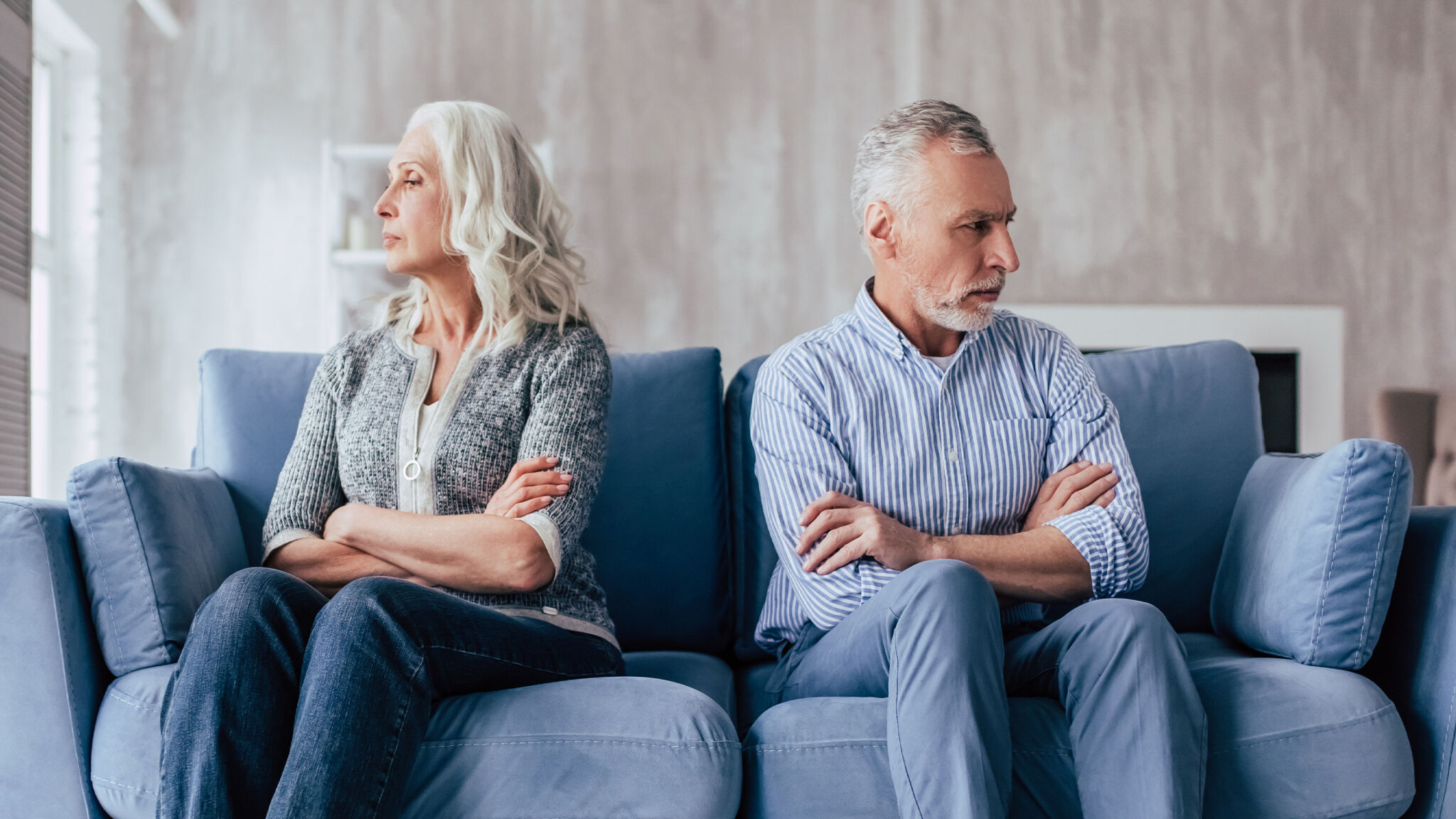 Some boast that divorce rates are plummeting. Not so for the senior set!

Published statistics appear to show that millennials are causing the American divorce rate to drop.

“Americans under the age of 45 have found a novel way to rebel against their elders: They’re staying married,” wrote Bloomberg’s Ben Steverman in September 2018, heaping high praise on Generation X and especially the millennials for lowering America’s divorce rate.

“New data show that younger couples are approaching relationships very differently from baby boomers, who married young, divorced, remarried and so on,” he continued. That sounds truly upbeat and positive. “Generation X and especially millennials are being pickier about who they marry, tying the knot at older ages when education, careers and finances are on track,” stated Steverman with swelling optimism. “The result is a U.S. divorce rate that dropped 18 percent from 2008 to 2016, according to an analysis by University of Maryland sociology professor Philip Cohen.”

The history of statistical interpretation has shown that numbers are often manipulated to prove what a person or organization already believes or would like to believe. Such beliefs, however, may be fantasy, speculation or intentionally false.

Is it true that Generation X and millennials are saving the beleaguered institution of marriage?

Gray Divorce on the Rise

As optimistic as the relatively recent data may sound, it is only a small slice of the marriage-divorce pie. Divorce is still common, and for one age group, it has hit an alarming rate.

Within just 10 months of its September 2018 article, Bloomberg published another article by Steverman: “Divorce Is Destroying the Finances of Americans Over 50.” It spoke of the high-profile divorce of Amazon founder Jeff Bezos representing millions of Americans splitting up in middle age. “The rate of divorce after age 50 has doubled in the U.S. since 1990,” Steverman wrote (emphasis added throughout). This is dire news with dreadful implications.

This phenomenon’s street name is “Gray Divorce,” or “Diamond Splitters.” Australia, Canada, India and the United Kingdom are experiencing the same trend.

“There are few things more devastating than divorce,” Steverman continued. “Even the very wealthy can find it financially draining, emotionally harrowing and just plain messy.” The Bezoses ended a 25-year marriage with four adopted children. Isn’t the word messy an insensitive description? When we consider the four children involved, six people went through a divorce.

One family law firm has estimated that among all Americans 18 years of age and older, whether they have been married or not, 25 percent have gone through a marital split. Let’s be honest: Divorce is always a group affair. The process and aftermath of a divorce involves much more work than cleaning up a mess of spilled breakfast cereal.

Of 30 articles found on the Internet on the subject of gray divorce, it’s interesting that the majority are published by financial institutions. In addition to Bloomberg, Forbes, Kiplinger and MarketWatch have joined the pack. The focus of their articles is the high financial risks associated with divorce and how to avoid them. Have we come to the time when the old adage money talks now applies to how to split up a long-term marriage?

A paltry number of articles related to gray divorce are not focused on finances. These discuss ways to cope with the traumas of divorce for the 50-and-over set. In September 2018, U.S. News & World Report featured an article titled “Divorcing After 50: How Gray Divorce Affects Your Health.” It was based on the findings of Susan Brown, a Bowling Green State University professor of sociology and codirector of the National Center for Family and Marriage Research. The article’s quip states, “Divorce-related stress and depression can make existing health conditions worse and set up seniors for additional risks.” In other words, divorce can lead to an early death.

Brown’s research shows that seniors over age 50 who divorce often experience a level of depression higher than a senior who loses a partner to death. In June 2019, Psychology Today published “Divorce Is a Risk Factor for Suicide, Especially for Men,” showing that divorced men were nine times likelier to die by suicide, compared to divorced women.

One unexpected health crisis related to gray divorce has shocked the medical profession. It is well known that sexually transmitted diseases are on the rise among teenagers and young adults. Now, stds are plaguing senior-age Americans. Why has this unexpected health crisis exploded in older Americans? “America is also experiencing a high midlife divorce rate,” reported the Benjamin Rose Institute on Aging in June 2019. “Consequently, older adults are looking for dates online, which lowers the chance that they know the background and sexual history of people they are dating. Older adults are also less likely to perceive themselves at risk for contracting stds.” Many stds have no symptoms, so many older adults don’t realize they are infected until serious or permanent damage has been done to their health.

Certainly divorce is a factor in this health crisis, but the degeneration of America’s moral values is the true cause. Promiscuity is risky behavior at any age. It can lead to a person’s death! Even worse, senior promiscuity sets an incredibly poor example for younger generations.

I found only two articles on the Internet that focused on the impact senior divorce is having on families. Shouldn’t there be more alarm?

Many couples decide to slug through a disastrous or unhappy marriage until their children are grown and on their own. The general thinking in the baby boomer generation is that a divorce will not impact their adult children. The truth is far different from what boomers assume.

“While many couples stay together until the children are grown, divorce is tough on kids of any age and can negatively impact parent and adult child relationships,” wrote Kathy McCoy, a psychologist writing for Psychology Today. “One study found, for example, that adult daughters may tend to blame fathers for a gray divorce, and that changing family dynamics—like newly divorced mothers becoming more dependent on their children—also can negatively impact parent and adult child relationships.” McCoy showed that what seniors believe about divorce may not be true.

A second article, “‘Grey Divorce’ Is on the Rise. And It’s Changing the American Family,” by Adam Bulger at Fatherly.com, provides real-life examples of the effect of senior divorce on adult children and their grandchildren. Bulger proposed that “gray divorce” is hardest on adult children with children. He wrote about how one pregnant young woman, about to give her parents their first grandchild, was devastated when her parents split up right after she gave birth. Bulger also showed that young children become confused when Granddad and Grandma no longer live together or visit them at the same time. “Grandchildren unite families, which is great when families want to be close. However, closeness isn’t something for which divorcing grandparents often strive. In fact, the opposite is likely true,” wrote Bulger.

“Divorce is tough on kids of any age and can negatively impact parent and adult child relationships.”
Kathy McCoy, Psychology Today

“While the overall divorce rate is slightly down, [n]ow, roughly 1 in 4 divorces is gray,” wrote Bulger. “The amount of baby boomers in the U.S. (74.6 million), increased life expectancy, and shifting ideas of marriage have all contributed to the uptick.” Marriage and family have suffered violent assault for decades. Can we see that the baby boomer—now the senior—generation may be the responsible party to deliver marriage and family its death blow?

Who Can Save Marriage?

We can appreciate Ben Steverman’s optimism for the millennial generation’s proclivity to “stay married.” Yet this group of people is not going to save the marriage institution. A Pew Research survey titled “Marriage and Cohabitation in the U.S.,” published in November 2019, showed that 7 percent of American adults are currently living with an unmarried partner, and that from 2013 to 2017, 59 percent of American adults ages 18 to 44 lived with an unmarried partner, while only 50 percent have ever been married. The millennial generation (ages 23 to 38 in 2019) represents a large segment of this number.

The reason millennials’ divorce rate is low is that a large percentage of them simply never get married. They just live together! Why? They have been soured on marriage by their baby boomer parents.

“Millennials act differently from their parents—and, sometimes, that’s because of their parents,” wrote sociologist Pepper Schwartz for Pacific Standard online magazine. “The baby boom generation has had the highest divorce rate in recorded American history, but it’s also the only generation that has increased its divorce rate as the boomers aged into their 60s and beyond. A large number of millennials experience household and emotional instability growing up, and they didn’t like it.”

Can you begin to recognize the real tragedy of gray divorce? The now senior baby boomers have set a wrong example for their children, souring them on marriage. And many seniors are continuing to divorce—some two or three times—potentially souring their grandchildren on marriage. The true concept of what makes a marriage and a family has become painfully distorted, perverted and warped in this 21st century. Careless and selfish people are not only wrecking their own families, they are wrecking what remains of the stability of society.

Marriage is a sacred institution founded by the great God at man’s creation. It was designed to preserve the loving and joy-filled relationship of a man and a woman for life.

You can stop this tragic trend. How? By learning the true and transcendent purpose of marriage. In our secular world, people have lost the knowledge that marriage is a sacred institution founded by the great God at man’s creation. Marriage is governed by God’s laws. Obedience to God’s laws concerning marriage produces abundant joy, peace and a stable society. Marriage was designed to preserve the loving and joy-filled relationship of a man and a woman for life. Such stability would naturally produce a family of stable children who would be taught to do the same.

Can you imagine a world without the scourge of divorce? Such a world is coming in the near future. You can have a taste of that world today.

Herbert W. Armstrong, the most important theologian of the 20th century, saw clearly the tragic state of marriage and family, which is so clearly seen today. He wrote two significant books on how to have a happy, lifelong marriage and family life. This information is offered to you without cost or obligation. Request your free copies of Why Marriage—Soon Obsolete? and The Missing Dimension in Sex. If you study and put this knowledge into practice, you will advance the preservation of marriage and family.