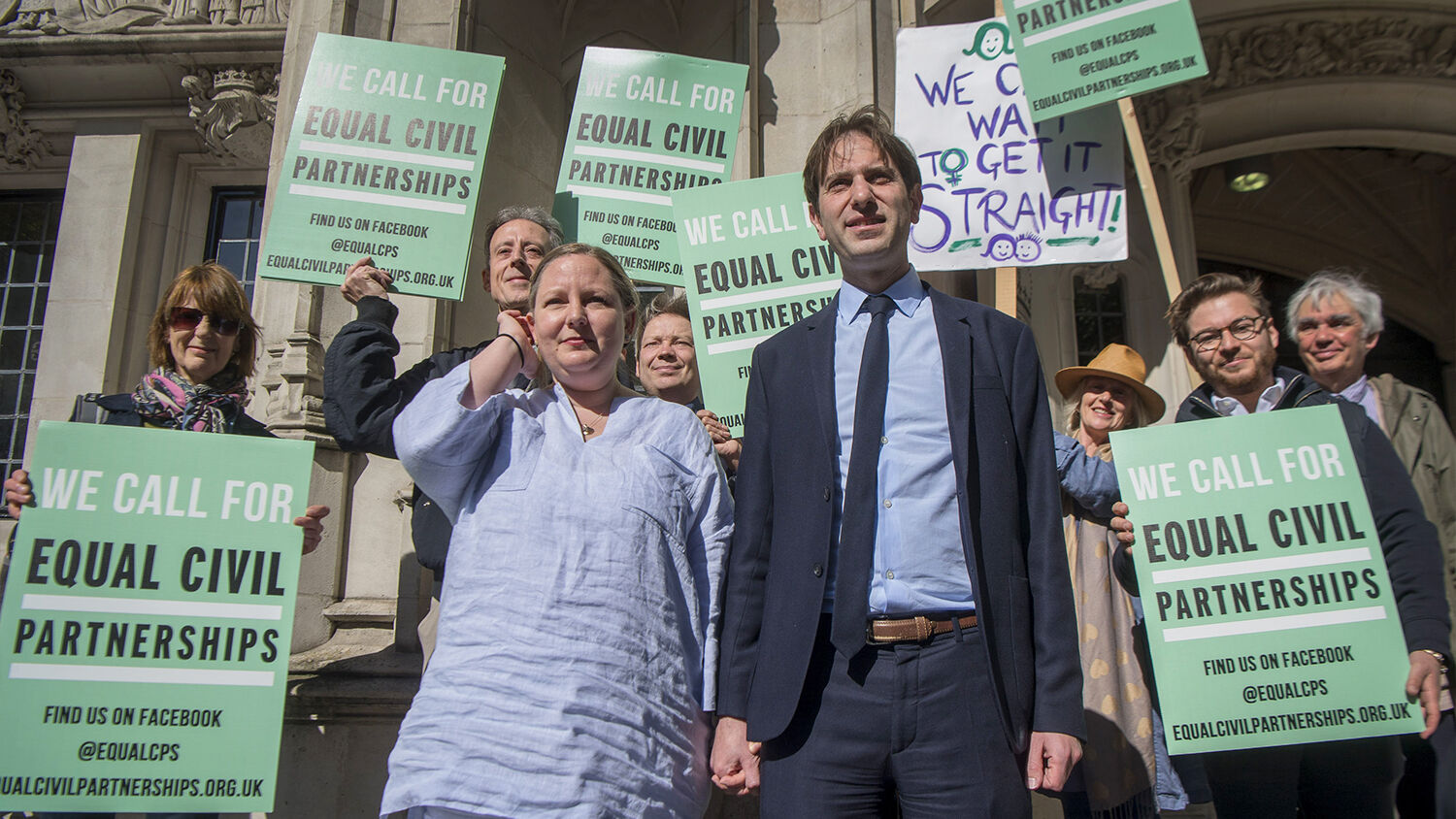 Partnerships with benefits and without commitments: Will they work?

New laws governing civil partnerships in the United Kingdom came into effect on December 31, allowing heterosexuals to live together with the legal benefits of marriage, while avoiding its commitments.

The first couple to not-quite-marry under the new law, Charles Keidan and Rebecca Steinfeld, had campaigned for five years to have the law changed to include heterosexual couples. It worked. With reporters watching, they were pronounced partners on Dec. 31, 2019.

Their victory came after the UK’s Supreme Court decided that only allowing homosexuals to have civil partnerships amounted to discrimination.

Now, more than 3 million cohabiting straight couples can apply for civil partnerships. They would gain legal rights nearly identical to a traditional marriage union, such as tax breaks, rights to inheritance, and entitlements to property.

The rise of civil partnerships replacing marriage is about more than just gaining greater control of one’s finances and property. It’s another reminder of a deep and widespread social change sweeping Western society.

“By ending the unrivaled position of marriage, we have helped to create space for deeper discussions about giving legal recognition to other types of personal and caring relationships, such as those between friends, siblings and co-parents,” Keidan told the Telegraph.

Steinfeld said she views traditional marriage as a sexist system in a patriarchal society. “Civil partnerships are a relative blank slate with no social script, so you can really imprint on them what you want,” she said. As a couple, she and Keidan felt that “there would have been a lot of social expectation and pressure to formalize that relationship in a way that we find very problematic and unequal from a gender point of view. So we didn’t want to have any of that.”

There are no wedding vows. She does not intend to change her surname. Her daughters will go by a combination of their parents’ names: Keidstein.

To people like Keiden and Steinfeld, traditional marriage is obsolete—even oppressive.

But abandoning it comes with consequences.

An April 2017 Brookings study found that the likelihood of divorce increases when parents live together without the bond of traditional marriage. Noting that stable family life is essential for healthy childhood development, the study showed that parents who are cohabiting have only a 20 percent chance of sticking together until the time their children are 15. By contrast, married couples have a 65 percent chance of staying together.

The UK’s civil unions provide couples with the same legal rights as marriage, but they do not encourage commitment. They actually make it easier to dispense with traditional ties like wedding vows and a shared family name.

The Institute for Family Studies confirmed that couples who marry the traditional way have higher relationship satisfaction. It found that “married women had a 54 percent likelihood of being in the highest relationship satisfaction group and married men had a 49 percent likelihood,” whereas for women and men choosing to cohabitate, “those likelihoods were 40 percent and 35 percent, respectively.” The same trend played out with regards to feelings of stability and commitment in a relationship.

There are tangible, built-in benefits to marriage that are being overlooked.

Scientific studies prove what is already stated in the most authoritative book on marriage: the Bible.

The Trumpet offers a free booklet, Why Marriage—Soon Obsolete?, which explains the reason marriage was created and why it brings untold benefits to mankind. The booklet’s author, Herbert W. Armstrong, founder of the Plain Truth magazine, asked in 1968 whether marriage would soon fade into irrelevance. This question, only beginning to appear in the news media around that time, is more relevant than ever in today’s world.

For many today, marriage is an obsolete and even oppressive system. “But does marriage, after all, serve any necessary purpose?” asked Mr. Armstrong.

Recent studies prove that the biblical teaching on marriage and family is correct and brings greater positive results than anything else. To understand the meaning of marriage, one must look to the Bible itself.

The God of the Bible created marriage (Genesis 2:24). He intended it to picture the real purpose for which He created humans: to be born as spirit beings into His Family (Genesis 1:26-27). Marriage pictures mankind’s incredible potential. Attempts to remove or trivialize it destroy this understanding.

Were it not for the very fact that we were created in God’s very likeness, with the very purpose of being born of God—born into God’s own Family—the marriage institution, giving us the experience of family life, would never have been ordained. If we were mere animals, developed by evolution, marriage would never have existed.

God is a Family!

Mr. Armstrong went on to explain the real purposes of marriage, such as how it pictures the marriage of Jesus Christ to the Church (Ephesians 5:23, 27). All of this points to a future for mankind so wonderful that it can be hard to even believe. But it is real. You cannot afford to take it lightly.

To learn God’s views on marriage, and how it points to the potential of every human to enter God’s own Family, request your free copy of Why Marriage—Soon Obsolete? by Herbert W. Armstrong.