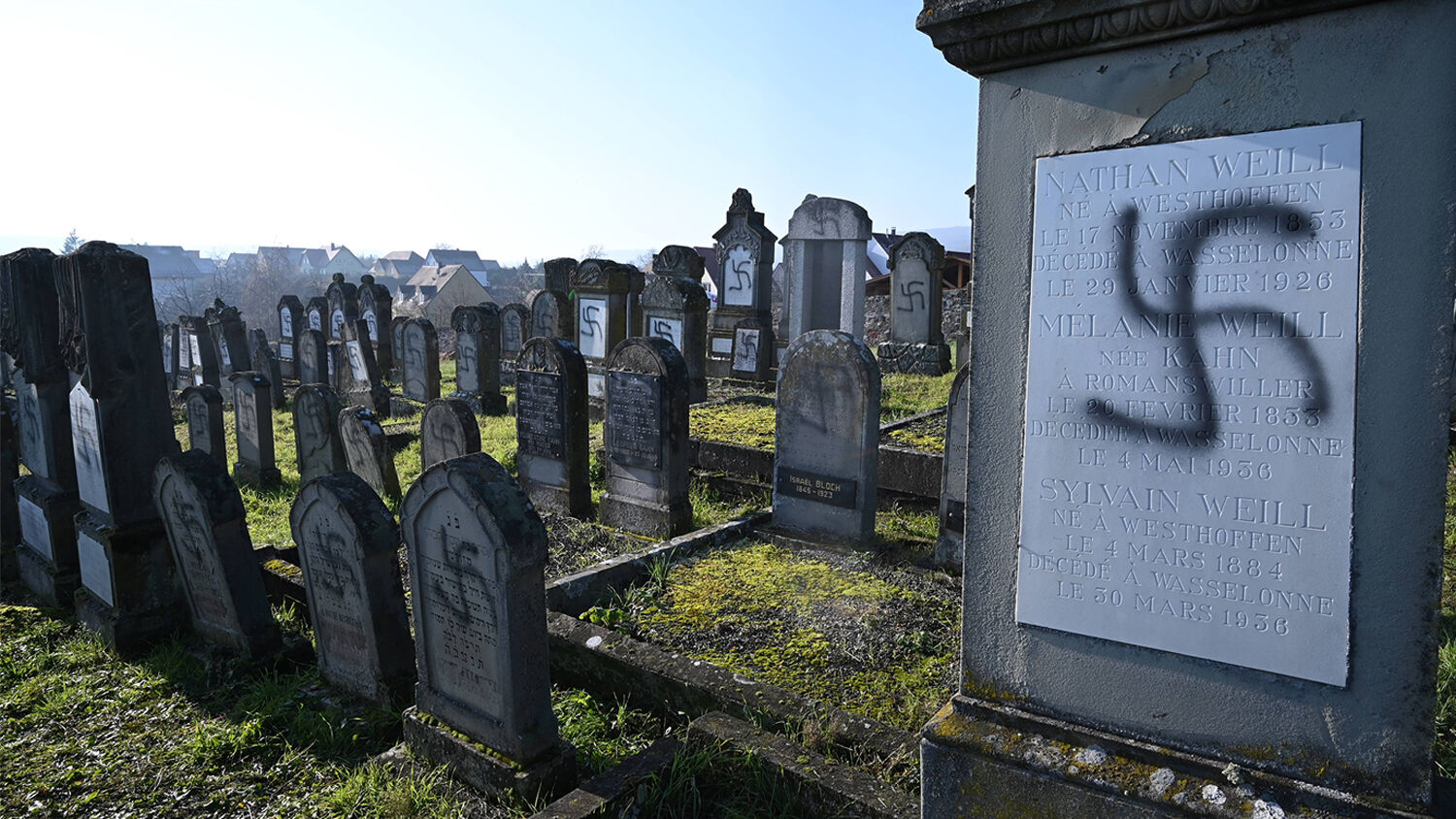 In December, 107 graves were found vandalized with swastikas and anti-Semitic inscriptions in the Jewish Westhoffen Cemetery near Strasbourg, eastern France.
AFP/Getty Images

Dozens of Jewish graves in Europe have been desecrated this month. On Tuesday, December 17, local officials in Namestovo, Slovakia, reported the desecration of 59 Jewish graves. On December 4, reports referred to more than 100 desecrated graves in a small Alsatian village in France.

In the midst of surging anti-Semitism, it appears that hatred against Jews doesn’t even stop once they’re dead.

During World War ii, some 105,000 Slovakian Jews were killed, reducing the country’s Jewish population by 77 percent. Today, only around 3,000 Jews live in Slovakia according to the World Jewish Congress. Slovakia’s Jewish community called the desecration of the 59 graves in Namestovo “an unprecedented barbaric act.” The Daily Mail reported:

Gravestones, including some dating back 200 years, were pushed over in the town of Namestovo, the cemetery’s general manager Karol Kurtulik said on Tuesday.

“When I discovered this, my legs went weak. It’s a barbaric act,” he said, warning of increasing spread of anti-Semitism through “fake news and online conspiracy theories.” …

The cemetery had survived World War ii, but many of the descendants of those buried there died in the Holocaust.

Therefore, the local population took it upon themselves to care for the graves.

Though the small Slovakian town no longer has a Jewish community, hatred against Jews continues. The World Jewish Congress noted that this is the first large-scale anti-Semitic attack in Slovakia in modern history.

Two weeks before, a Jewish cemetery in France was desecrated. About 107 Jewish graves in the small Alsatian village of Westhoffen were found covered with swastikas and anti-Semitic graffiti. Since the beginning of the year, there have been more than 50 incidents of school buildings, village walls and cemeteries being spray-painted with anti-Semitic graffiti in the region, officials reported.

The New York Times reported that “the village of Westhoffen no longer has a Jewish community.” But hatred against Jews seems prevalent and even tolerated.

The police investigating the crimes are puzzled, because many of the crimes lack witnesses. “It raises questions,” the rabbi for the region, Harold Avraham Weill, said. “All these incidents, and no one has seen anything?”

“There is a silence, a deaf-and-dumbness in the population,” he continued. “There are no eyewitnesses. Nobody has seen or heard anything. We are obligated to ask questions.'’

“This is what astonishes me,” said Maurice Dahan, president of the Jewish community of the Bas-Rhin department, where Westhoffen is located. “These cemeteries are inside the villages. So I ask myself the question, all those people I saw at the windows yesterday, and nobody saw anything, nobody heard anything? It’s not possible that people never see anything.”

“It was the latest in a series of anti-Semitic incidents in the region,” as the New York Times noted. “Last February, 96 graves in Quatzenheim were discovered scrawled with swastikas, and almost exactly a year ago tombs at Herrlisheim were found similarly desecrated.”

Over the years, various European leaders have attempted to fight anti-Semitism on the Continent. But their efforts have been in vain. German Chancellor Angela Merkel has done a lot to draw attention to the growing problem of anti-Semitism, but even her best attempts haven’t solved the issue. Recent stories coming out of Europe have proved that anti-Semitism is growing increasingly worse.

“How concerned should we be about what’s going on in Europe?” Trumpet editor in chief Gerald Flurry asked in 2008. “As I said, I think Angela Merkel’s address in the [Jewish] Knesset was a moment of greatness for her. But her view will not prevail in Europe. I know that because of Bible prophecy.”

Revelation 17 is a prophecy for our day that describes a German-led European empire that will be motivated by a deep-rooted hatred for the Jews. Verse 8 refers to a beast that “was, and is not, and yet is.” Mr. Flurry explains this prophecy in his booklet Prophesy Again: “During World War ii, we saw the Hitler-Mussolini axis, but then it disappeared from the scene. It ‘was not’! And yet, God says, ‘it is’! The Axis powers lost the war, but as Mr. Armstrong preached time and again, they just went underground—into ‘the bottomless pit’ (verse 8). They’re still there—they’re just underground.”

There is a deeply entrenched hatred for Jews in this world, and few understand its origin. “Most people who hate the Jews don’t even know why they do,” Mr. Flurry explains in his book The Key of David.

The rise in anti-Semitism points to a dangerous reality. Throughout history, anti-Semitism has arisen as a foreboding sign of dark days ahead. The Guardian’s Jonathan Freedland wrote, “Jews have often functioned as a canary in the coal mine: When a society turns on its Jews, it is usually a sign of wider ill health” (March 30, 2018).

The growing rise of anti-Semitism is a sign of a new power rising in Europe. In the short term, persecution of the Jews will get worse. There is a spiritual reality behind this persecution, which explains why Jews are so consistently persecuted. But it also contains hope for the permanent end of anti-Semitism. You can read more about this in our article “The One Minority Society Loves to Hate.”