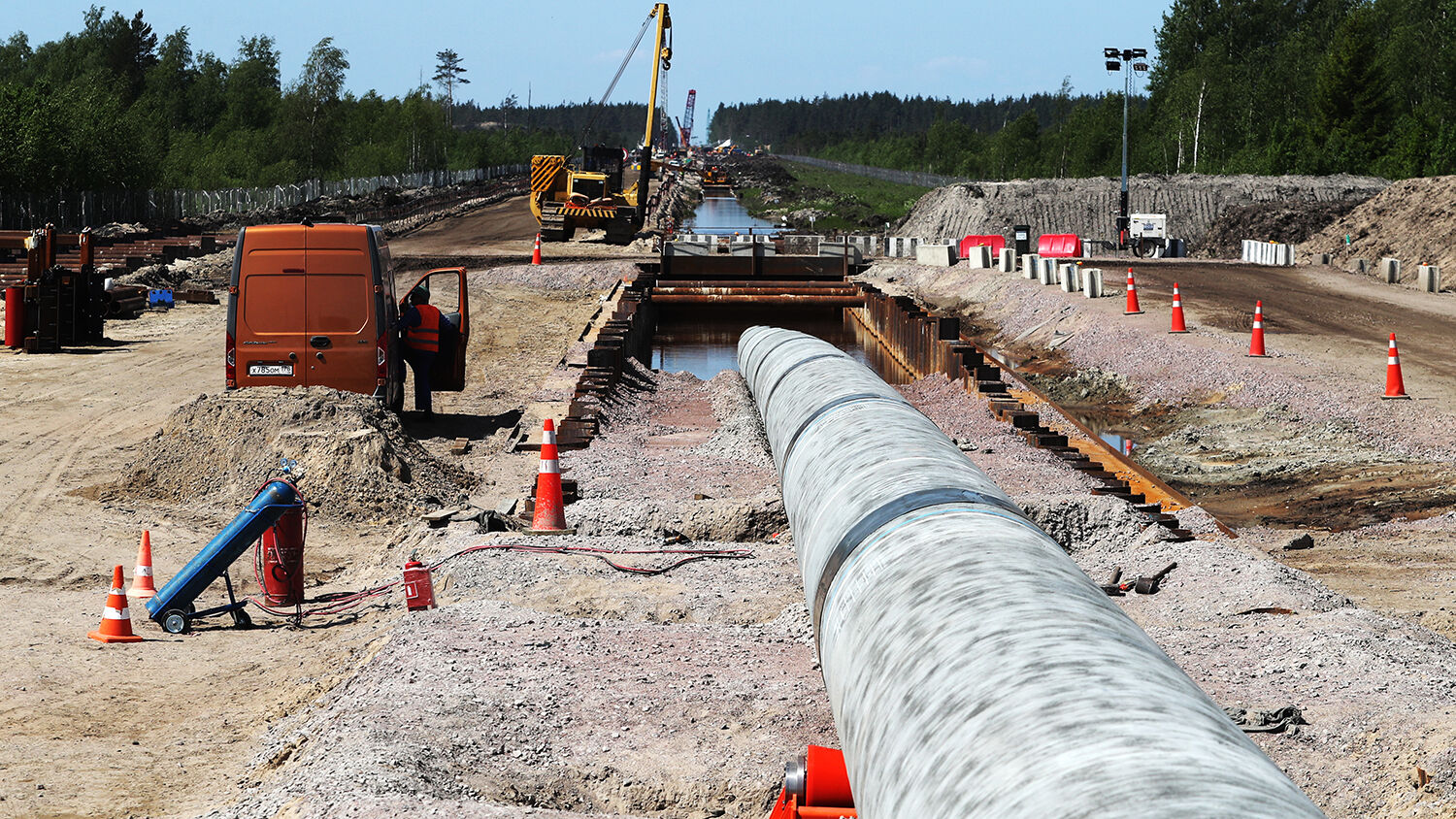 A section of the Nord Stream 2 natural gas pipeline near Kingisepp, Leningrad is under construction on June 5.
Alexander Demianchuk\TASS via Getty Images

Germany’s foreign minister called on the U.S. to mind its own business; but more than business is at stake.

Officially, Germany and the United States agree when it comes to sanctioning Russia. But what if U.S. sanctions are directed against German-Russian cooperation? On November 12, the U.S. House of Representatives passed a defense bill that includes sanctions against the Nord Stream 2 pipeline. The gas pipeline, which is scheduled to be finished mid-2020, is a prime example of the complexity of German-Russian cooperation.

Nord Stream 2 is planned to increase Russia’s direct gas supply to Germany through the Baltic Sea. So far, all major hurdles that opposed the completion of the project have been successfully overcome. Eastern Europe’s fears have been ignored. All permits from transit countries have been approved.

In July 2018, U.S. President Donald Trump strongly criticized Germany’s decision to build the pipeline. “I think it’s very sad,” he said, “when Germany makes a massive oil and gas deal with Russia, where you’re supposed to be guarding against Russia, and Germany goes out and pays billions and billions of dollars a year to Russia.”

Why does the U.S want to stop the project now—but not earlier?

Part of the reason the U.S. didn’t sanction the project earlier is it hoped the Nordic and Baltic countries would disapprove of the pipeline passing through their territories. But each country approved it; Denmark provided the final approval in October.

Now the U.S. wants to stop the project from the other side of the Atlantic.

Many in Germany have sharply criticized the U.S.’s plan. “European energy policy is decided in Europe, not in the U.S.,” Foreign Minister Heiko Maas said on Twitter. “We reject external interference.”

Despite strong German opposition, the bill is expected to be passed by the U.S. Senate and President Trump.

The U.S. claims that Germany will become increasingly dependent on Russia through the pipeline. What’s more, the U.S. fears that the project puts Ukraine’s security at risk and increases Russia’s leverage over Eastern Europe.

The U.S. has good reason to oppose Nord Stream 2. Russian President Vladimir Putin has been bullying Ukraine for years, putting the country in turmoil. And once Nord Stream 2 is finished, Putin’s leverage over Ukraine will increase dramatically.

With Germany connected directly to Russian gas supplies, Ukraine will lose enormous value as a transit nation. “Moscow wants to bring Ukraine back into Russia’s orbit, and it sees gas as a possible tool,” wrote Steven Pifer, senior fellow at the Brookings Institution’s Center on the United States and Europe. “If it has no gas sales to Ukraine, it can still end transit through the country, cutting off the substantial transit fees (about $3 billion per year) that it now pays Kiev.”

Ukraine depends heavily on that income and rightly fears to lose it. But that is not the only fear Ukrainians have. Trumpet editor in Chief Gerald Flurry explained in “Germany and Russia’s Secret War Against America”:

Nord Stream and Nord Stream 2 are key components of Putin’s plan to tighten his grip on nations in Eastern Europe that used to be part of the Soviet empire. Since these pipelines travel directly from Russia to Germany, they enable Putin to shut off gas supplies to nations in Eastern Europe—Ukraine, Poland—and the Baltic nations while keeping supplies flowing to Germany.

This places a sharp edge on Putin’s energy weapon! To the former Soviet nations that he is determined to bring back under Russia’s power, he can say: Either obey Russia or suffer cold winters with no gas to heat your homes.

Germany claims that the U.S. does not have Ukraine’s interest in mind but wants to sell its own liquefied natural gas to Europe. The German government claims that the sole reason Germany chooses Russian gas over that from the U.S. is cost. So Germany is willing to risk the death of possibly millions of Ukrainians and the demise of the country in order for financial benefit.

She welcomes the new transport route and sees the additional gas that is being transported to Germany as a contribution to energy security. However, Chancellor Angela Merkel admits that the project has a strong geopolitical component. She assured Ukraine that she will take its concerns seriously. … Merkel has repeatedly stated that she wants to prevent a possible consequence of Nord Stream 2: transit through Ukraine drying out. In principle, Russian President Vladimir Putin has agreed to this. The details are currently being negotiated. The question remains, however, how reliable are Putin’s commitments.

Either Germany is foolish to believe Putin will keep his half-hearted promises, or Germany made a deal with Russia to the detriment of Ukraine. If you know anything about German-Russian cooperation in the past, you know the latter is much more likely.

In our November-December 2008 issue, Gerald Flurry wrote: “[D]id you know that Germany and Russia have probably already dealt with their most urgent differences? … I believe that Germany’s leaders may have already agreed to a deal with Russia, a modern Hitler-Stalin pact where Germany and Russia divide countries and assets between themselves. This agreement would allow each to turn its sights on other targets. Any such deal that may have been struck between Germany and Russia is a precursor to war!”

Chancellor Merkel is not the chief architect behind Nord Stream 2. Behind her stand many German businessmen and political elite who have been pressing for this deal for many years.

U.S. sanctions may delay the completion of Nord Stream 2, but they will likely come too late to stop the project entirely. What’s more, they will drive Germany and Russia into an even closer cooperation and increase their common hatred for the U.S.

But the sanctions could also have a positive outcome. They are helping to expose Germany’s rise to dominance and its malicious planning.

The Bible reveals that history is about to repeat itself: German-Russian cooperation will lead to the destruction of many nations (Daniel 11:40-45).

Relations between the two play a major role in Bible prophecy. The history of their alliances has not been pleasant for surrounding nations, or even for Russia and Germany themselves. This alliance is once again leading to both attempting to conquer other nations. It will lead to a lot of suffering in the short term. But the Bible also tells us that, in the long term, these events lead to wonderful hope.

For an in-depth understanding of what the Bible reveals about where German-Russian cooperation leads, read our article “The Vicious Cycle: German-Russian Relations.”