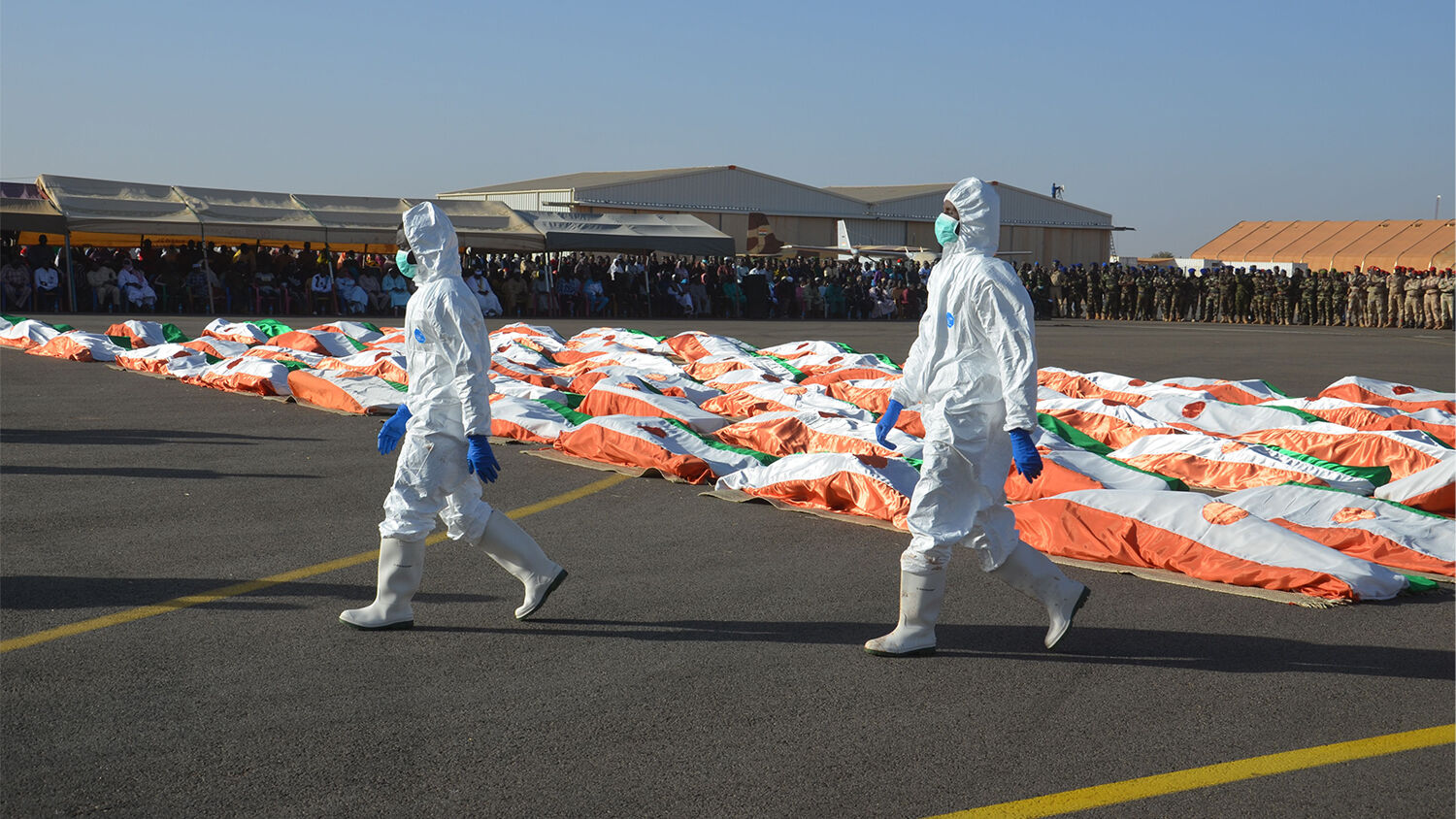 Two Niger military firemen walk past the bodies of military personnel covered with the Niger national flag at the funeral prayer at the Niamey Air Base on December 13.
BOUREIMA HAMA/AFP/Getty Images

Another reminder of why you should watch terrorism in North Africa

Islamic militants attacked an army camp at Inates, Niger, near the border of Mali, on December 10, killing 71 troops. This was Niger’s deadliest jihadist attack in recent memory and comes as the nation fights increasingly frequent and violent terrorism. It is a reminder that radical Islam in Africa is more than just an African problem.

The militants approached the army camp at Inates with motorcycles and trucks, and began to fire mortars. Soldiers returned fire and a three-hour-long battle ensued against the “many hundreds” of attackers, stated the Defense Ministry. When it was over, 71 soldiers had died, in addition to 57 terrorists.

Despite European intervention, Niger is far from safe. Terrorist attacks against North African governments are increasing.

The Inates army camp is situated in an inhospitable region of vast stretches of desert. It is difficult to patrol and has become a stomping ground for jihadists. “The remote, grassy borderlands where Burkina Faso, Mali and Niger meet have become a haven for militants and criminal outfits linked to [the Islamic State] in the Greater Sahara,” wrote Reuters.

Groups like al Qaeda in the Islamic Maghreb and Boko Haram are also infiltrating Niger’s border lands. Because of the inhospitable terrain, the need to train African troops, and the misuse of funds, fighting these extremists is difficult. Attacks have become more violent in “recent weeks,” reported bbc.

French troops under Operation Barkhane are stationed in Niger and other Sahel nations. In 2018, Germany opened a base in the country and donated military supplies. Ursula von der Leyen, president of the European Commission, said, “Niger, like Mali and the other countries of the Sahel region, is part of the European neighborhood, a neighborhood facing unending challenges.”

Despite all the effort Europe and the United Nations are expending in the Sahel, attacks are only getting worse. Mali also experienced its worst attack in recent memory when 53 of its soldiers were killed by Islamic State fighters on November 1. “Jihadis with links to the ‘Islamic State’ and al Qaeda have stepped up attacks on army outposts in West Africa’s Sahel region this year, despite the deployment of a regional military force and thousands of French troops,” said Deutsche Welle.

Niger, and the broader Sahel region, is strategically valuable. And not only to African nations. Reducing the amount of Islamic activity would have many benefits for Europe, including less piracy and fewer migrants being trafficked into Europe. It would also open more investment and development opportunities in Europe’s backyard.

From Ancient Rome to the “Scramble for Africa” of the 19th century, European powers have been interested in Africa. It is logical that today Africa is a major focus for the militaries of European countries. The only other place where deployments of comparable size are made is in the Middle East.

Africa and the Middle East share a common element: radical Islam. Fighting this aggressive movement is what motivates predominantly Christian Europe to get involved in Africa.

Whether European forces will succeed in stopping the jihadists hinges on both the power of their armed forces and the national willpower behind those forces. How deeply is Europe willing to get involved in the fight?

For a definite answer to this question, you have to look to the Bible.

The Bible shows that Europe, briefly united by its Christian heritage and guided by the Catholic Church, will attack radical Islam like a “whirlwind.” Daniel 11:40 says, “And at the time of the end shall the king of the south push at him: and the king of the north shall come against him like a whirlwind, with chariots, and with horsemen, and with many ships; and he shall enter into the countries, and shall overflow and pass over.”

Trumpet editor in chief Gerald Flurry explains in his free booklet The King of the South that “the king of the north” represents a German-led European power, and Iranian-backed radical Islam is the prophesied “king of the south.” He writes:

We have seen how the king of the south could push at the king of the north. And then Germany responds with a “whirlwind” attack. This one word prophesies how the German-led clash with Iran is going to unfold. It reveals in detail what is about to happen in the Middle East—and in Africa, southwest Asia and Europe. …

This scripture [Daniel 11:40] describes a time when Germany’s Catholic empire will wage all-out war, throwing everything it has at radical Islam—and dominating it like a violent flood pouring in! …

Berlin will not be able to overwhelm Tehran in the near future unless it is working on a special strategy right now.

It’s important to take note of the word “push” in Daniel 11:40. The terrorists are nowhere near giving up. Each time they “push,” attacking Sahel nations, they further destabilize this strategic region in Europe’s periphery.

Pay attention to radical Islam in North Africa. Its violent supporters are on a collision course with Europe, and the result will be war.

Europe’s whirlwind response will shock other nations. It will change Africa and the Middle East. And it will impact you personally no matter where you live. To find out how, read our free booklet The King of the South, by Gerald Flurry.