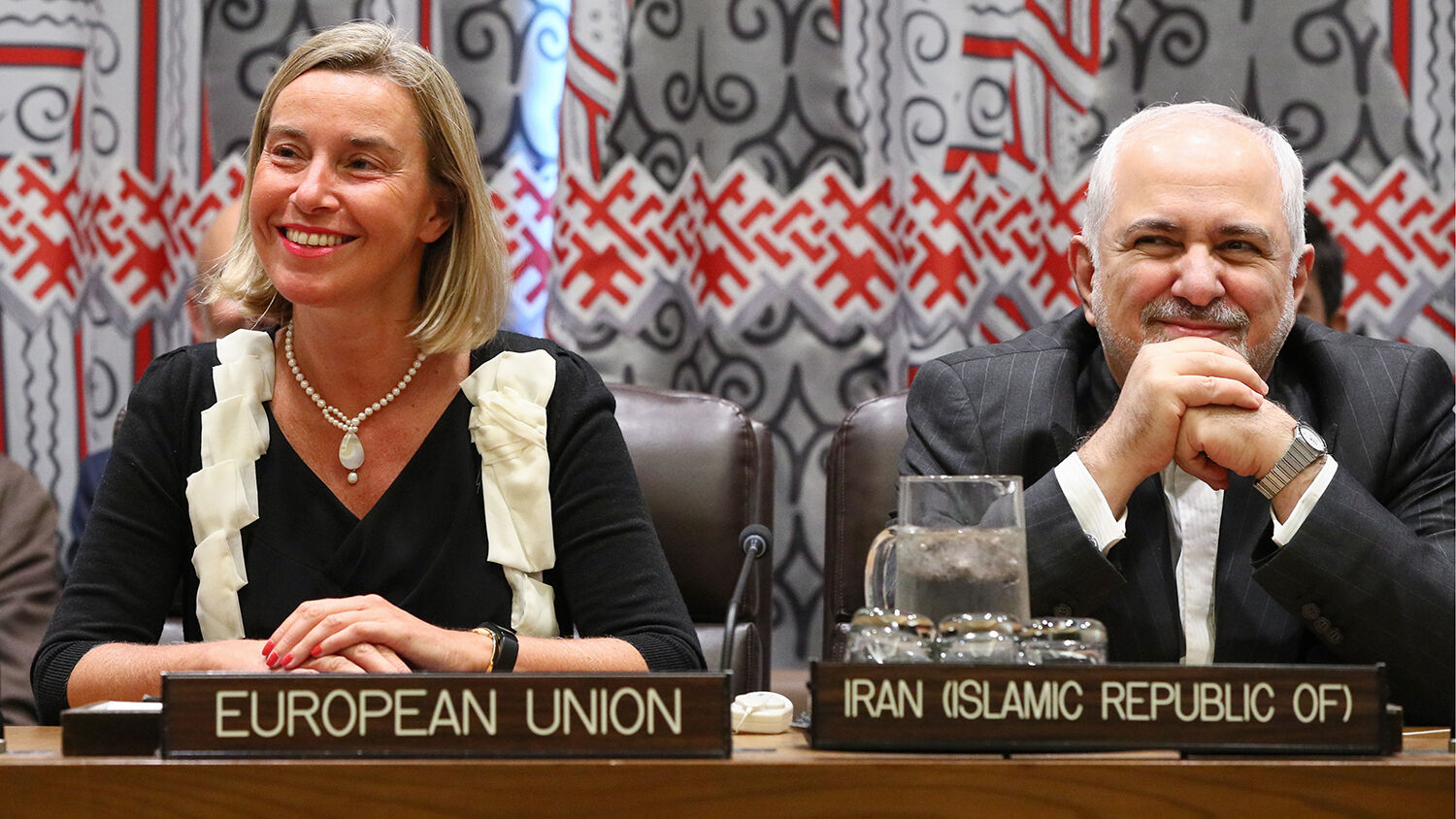 Sowing the seeds of a violent clash

Don’t be fooled by the dull name.

instex amounts to a European attempt to trade with the Iranian regime through a barter system—to circumvent United States sanctions.

The timing couldn’t have been worse. While Iranian civilians were dying for standing up to the fanatical regime, Europeans were devising a way to empower that same regime.

Given Europe’s self-professed claim as the moral, progressive and democratic bastion of the world, you would think it would support the protesters.

For many, the timing of Europe’s announcement provided a moment of clarity as to why the U.S. pulled out of the Iran nuclear deal, and how shocking it is that Europe is still working to champion it.

In many ways, the current protests are a sign that U.S. sanctions are having a powerful effect in Iran. By cutting off most of Iran’s trade with the outside world, the regime is lacking the funds necessary to both run the country and continue its interference in other countries, such as Lebanon, Iraq, Syria and Yemen. The financial hardship got so bad in November that the regime stopped subsidies on gasoline, which dramatically raised the price of fuel.

Instead of pulling back Iran’s investment of Hezbollah, Hamas and other terrorist groups, the regime decided to make Iranians foot the bill. “No Gaza. No Lebanon. I give my life for Iran,” are common refrains from the protesters. Many Iranians were already feeling the strain of sanctions. The surge in fuel prices was the final straw.

The timing of the announcement was not lost on many Israeli commentators, most notably, Israeli Prime Minister Benjamin Netanyahu. He said:

While the people of the Middle East bravely stand up to Iran and its henchmen, countries in Europe are working to bypass U.S. sanctions against Iran. While the Iranian regime is killing its own people, European countries rush to support that very murderous regime. While Iran bombs Saudi Arabia’s oil installations—while Iran rushes to enrich uranium for nuclear weapons—European countries rush to appease Iran with even more concessions. Now is the time to ratchet up the pressures on Iran, not to lessen them!

The inner workings of the Joint Comprehensive Plan of Action (jcpoa—the official name of the Iran nuclear deal) can be hard for the common man to comprehend; Europe trying to fund a tyrannical regime as it bludgeons its own people is unmistakably clear.

To be fair, the same European nations trying to keep the deal alive also issued statements in support of the protesters and decried Iran’s treatment of its people.

But without the threat of concrete action, Europe’s statements ring hollow. This is highlighted further by Europe’s repeated inaction over Iran’s public breaking of the nuclear deal.

Seven Months to the Bomb

For the past six months, Europe and Iran have been playing a game of chicken; whereby both threaten to leave the nuclear deal if the other doesn’t come through.

From Iran’s point of view, the nuclear deal has failed to furnish the regime with the open trade deals it was promised by the West. Regardless of whether the United States is part of the deal, Iran believes Europe should follow through and trade with Tehran.

Europe, desperate to keep the deal alive, has tried to encourage its businesses to trade with Iran. However, almost no European company is willing to do so if it means the company will be unable to trade with the U.S.

The result is that for the past six months Iran has started breaking the nuclear deal in hopes that it can blackmail Europe to start putting forward money. Iran has incrementally broken its nuclear commitments by expanding its nuclear research work and renewing enrichment at Fordow, a once-secret underground nuclear facility. It has also enriched uranium above the purity level allowed by the nuclear deal.

Four times in the past year Iran has announced it will break a portion of the nuclear deal. And four times Iran has followed through. After each infraction, Europe issues a strongly worded letter threatening Iran with reprisal. And four times Europe has done nothing.

In effect, in the past half year, Iran has reduced its nuclear breakout—or the time it needs to produce a nuclear weapon—down from 1 year to seven to eight months.

To think that Iran could be just seven months away from the nuclear bomb and all the while Europe continues to dance with the regime is both shocking and dangerous.

No wonder Israel is seriously reconsidering how it might have to strike Iran’s nuclear program as it did Syria’s in 2007 and Iraq’s in 1981.

Given Europe’s current track record of appeasement, how are we to judge Europe’s December 6 statement that it will finally take its first step away from the deal if Iran doesn’t stop breaking it? According to the Wall Street Journal, Europe is considering triggering the “dispute mechanism” if Iran breaks the deal further, as it has announced it intends to do in January. Even if Europe decides to go forward with the dispute, it will not lead to snapback sanctions, but rather a months-long process of investigation and discussion to attempt to bring Iran back on board.

Put simply, there will be more appeasement.

Europe’s appeasement is cloaking the fact that Iran is making concrete steps toward developing a nuclear weapon.

All the while, few in the world are wiser for it. Surely Europe wouldn’t still be in the nuclear deal if Iran was marching toward a bomb is the natural thought process.

“What will it take for Europe to wake up and realize that no amount of money, accommodation or deference will change the structural dna of Iran’s leaders, who are bent on the eradication of Israel and the ascendency of Shi’ism over Sunnis and minority populations living in the Middle East,” wrote respected Middle East commentator Eric Mandel on December 9.

It’s hard to fathom—at least completely—that Europe is being played the fool by Iran.

Europe has motivations to stay within the nuclear deal. Retreating from it would mean siding with the much-maligned United States President Donald Trump, a president that is often belittled in European circles for his unsophisticated manner. Breaking the nuclear deal would also mean dispelling the progressive worldview common among European elites—that all peoples are fundamentally good—that the Iranian regime is simply misunderstood and could be induced to change its ways. For these reasons and others, Europe is allowing its judgment on Iran to be clouded.

Given its recent track record, there is little hope that Europe will confront Iran’s dangerous turn.

It’s ironic then that we at the Trumpet actually forecast that it will be Europe and not the United States or even Israel that will eventually confront Iran. And not just confront, but overwhelmingly defeat the regime in a violent incursion into the Middle East. (Please read Trumpet editor in chief Gerald Flurry’s free booklet The King of the South for our complete forecast.)

Based on a latter-day prophecy found in Daniel 11:40, we have stated for over a quarter of a century that Iran will meet its demise at the hands of a resurgent German-led Europe. Given its current appeasement of Iran, this forecast may seem unlikely or, at best, far off in the distance.

However, in some ways, it’s possible that Europe’s current policy of appeasement could eventually motivate a frustrated Europe to snap and finally act against the regime. As we have often stated, Iran’s policy is one of belligerence and pushiness. The regime’s history proves it will not change course unless compelled by force or absolute threat of force. Currently, Iran’s leaders feel no such threat of force from Europe. It stands to reason then that Iran will continue to push at Europe to make concessions over the nuclear file.

Europe’s current policy of appeasement of Iran could eventually motivate a frustrated Europe to snap and finally act against the regime.

While it is the United States that has pulled out of the deal, Iran is angry at Europe for staying in the deal without delivering the money it promised. All the while, Europe is saying to Iran, Quit breaking the deal and exporting terrorism and we can work something out. Put together, friction is developing between Europe and Iran. In this uneasy back-and-forth, we are witnessing the tension that will eventually explode to produce the Daniel 11:40 clash.

Continue to watch the tension rise between Europe and Iran over this issue. It’s likely that Europe’s current policy of appeasement will continue in the near term, at least until there is a prophesied change in European leadership. By which point, European frustration will be close to boiling and will welcome a clear-eyed strongman who is ready to deal with Iran.