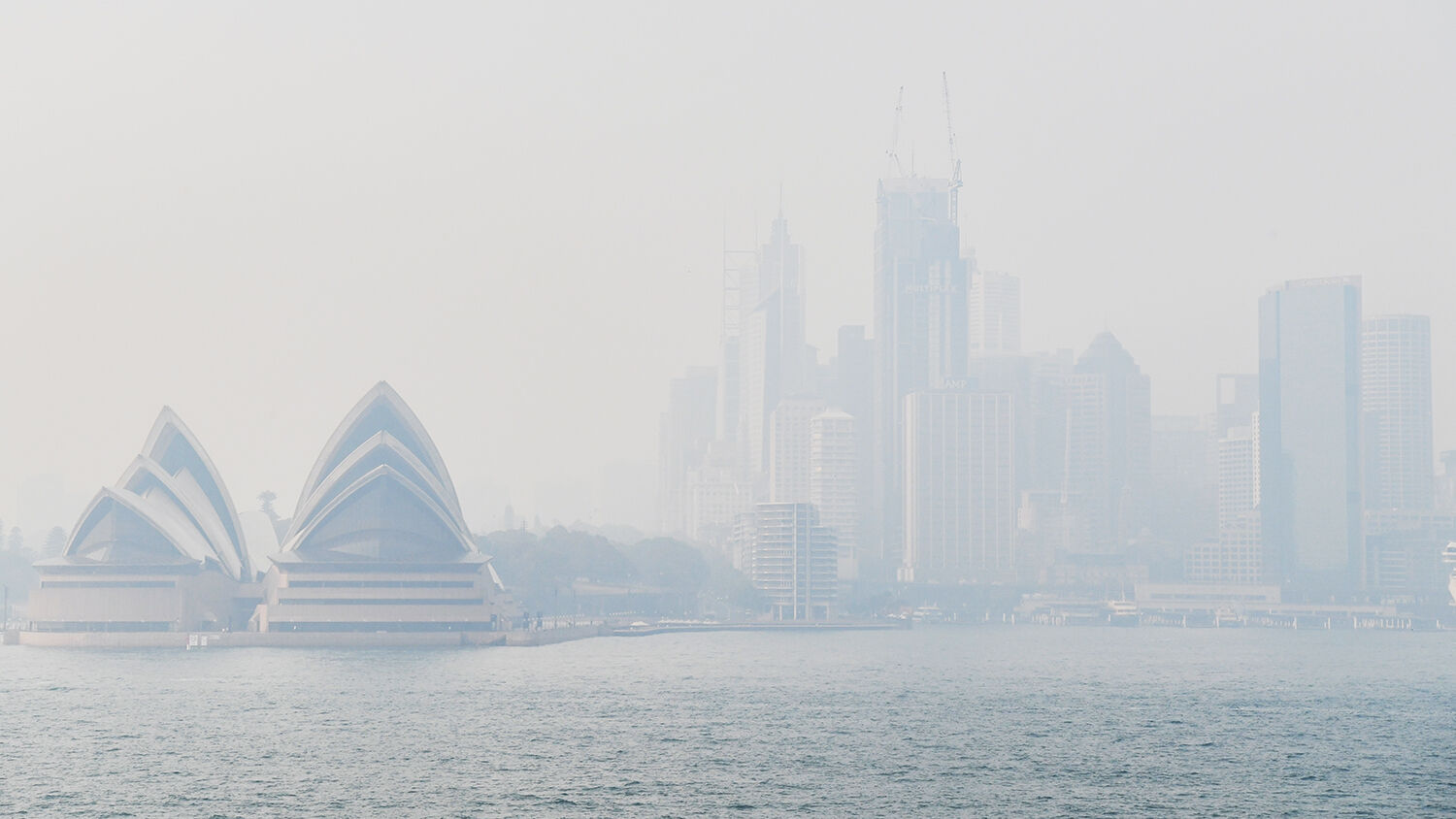 The Sydney Opera House is seen through a smokey haze, which enveloped Sydney Harbor on December 10.
James D. Morgan/Getty Images

Are humans to blame for the fires ravaging Australia?

Smoke over Sydney, Australia, caused by raging bushfires, has become so thick that it is setting off smoke detectors in the central business district, reported South China Morning Post on December 10.

Australia uses an air quality index to gauge the levels of pollution around the city. A hazardous level of pollution would register around 200 micrograms per cubic meter on this scale. By comparison, bushfires in some of the city’s eastern suburbs have registered at 2,552 micrograms per cubic meter. The thick blanket of smoke has become so bad that airplanes landing at Sydney Airport are being delayed by half an hour while waiting for an improvement in visibility.

Other signs of how bad the fires are include ash washing ashore at popular Sydney beaches and a haze so thick that it obscures the famed Sydney Opera House and Harbor Bridge.

Watch this time-lapse and see Sydney disappear under thick smoke. We have the latest on the smoke, the fires and the warnings across the state here: https://t.co/ivEQzULxvm pic.twitter.com/Z3JKBCVCmx

So far, the fires have burned 6.7 million acres of land. Their perimeter spans 11,952 miles. Northwest of Sydney, a “megafire” is burning, stretching 37 miles. Meanwhile, temperatures routinely top 104 degrees Fahrenheit and winds are increasing, carrying the fire into new areas. State authorities described the situation as “lethal.”

So far, 700 buildings have been destroyed and four people have died. More destruction is almost certainly on the way.

Australia is being hit hard. The fires are the latest effects from the nation’s worst drought in 400 years. Farmers are feeling the worst of it; in October, the Telegraph reported that some were asking the government for financial help to abandon their farms.

Articles covering the bushfires are quick to blame climate change and criticize Australian Prime Minster Scott Morrison for inaction. But as Trumpet managing editor Joel Hilliker pointed out in his article “The Unseen Consequence of Climate Change,” this is not the real cause. He wrote:

The focus on climate change hides the real issue. If human carbon emissions aren’t causing floods in Venice and droughts in Australia, then what is?

People are the cause of these disasters—that much is true. But although mankind has certainly polluted and degraded his environment, the real problem is not physical pollution or mismanagement. It is spiritual. Mr. Hilliker continued:

Notice the promises God makes in Leviticus 26:3-4: “If ye walk in my statutes, and keep my commandments, and do them; Then I will give you rain in due season, and the land shall yield her increase, and the trees of the field shall yield their fruit.” Contrast this with verses 14, 19 and 20: “But if ye will not hearken unto me, and will not do all these commandments …. I will make your heaven as iron, and your earth as brass: And your strength shall be spent in vain: for your land shall not yield her increase, neither shall the trees of the land yield their fruits.”

God brings these disasters upon nations when they refuse to keep His law. Why? They make people sit up and pay attention. Criticizing leaders for neglecting to act on climate change, much of which is based on spurious data, obscures the real cause of weather disasters: the spiritual state of the nation. Droughts and wildfires like these, and others around the world, are one of the most powerful tools God can use to reach a nation with His corrective message. God wants to spare people the agony and suffering that come from disobeying His law. Punishments such as these are only necessary when people refuse to listen to His message.

God wants you as an individual to avoid the consequences of sin. But that can only be done by exercising your power of choice and turning to God’s law. If you would like to understand more about how you can personally be protected from this and worse disasters to come, read Joel Hilliker’s article “The Unseen Consequence of Climate Change” and order your free copy of Why ‘Natural’ Disasters? today.