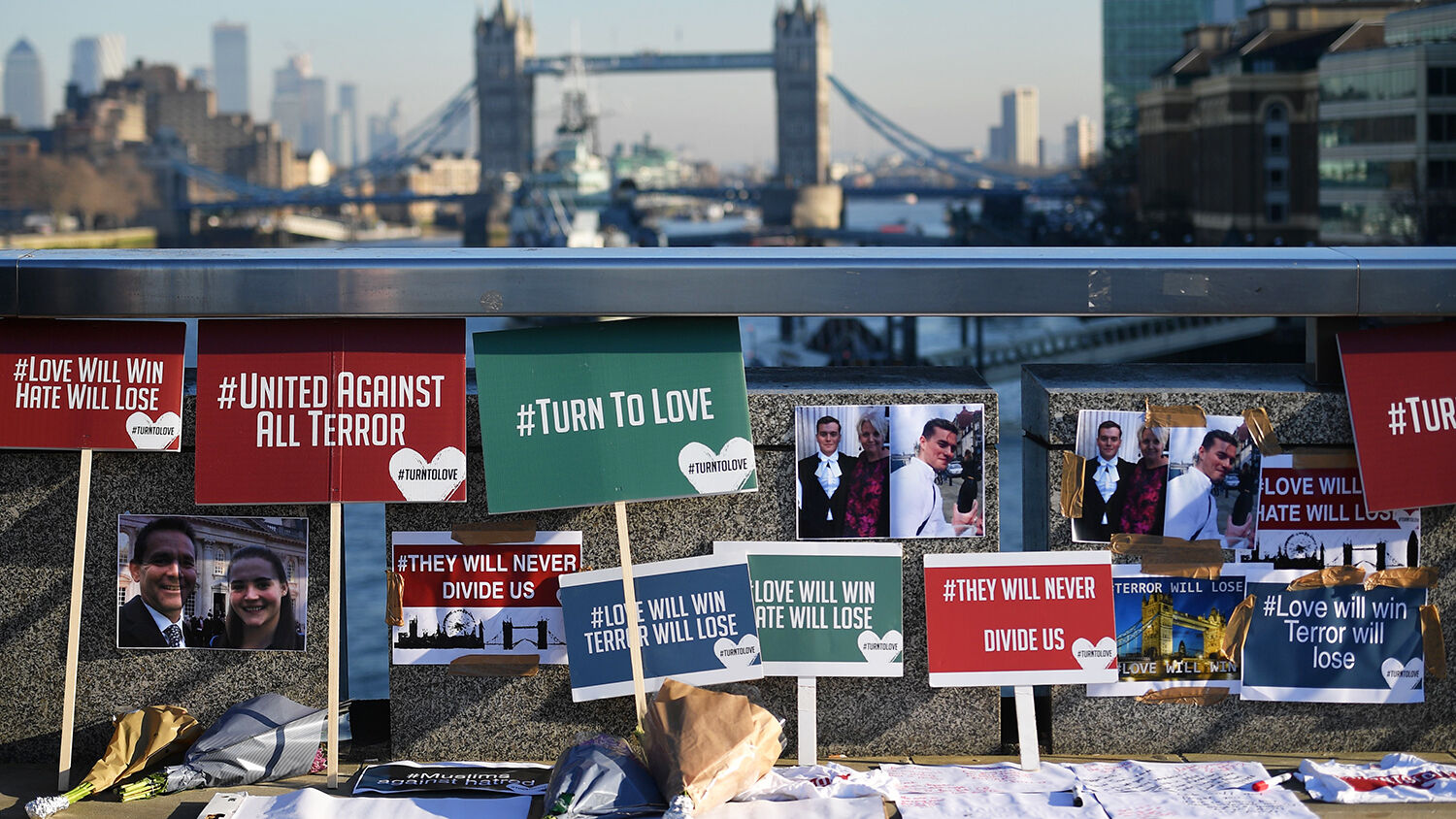 Banners and pictures are placed on London Bridge on December 2 in memory of the victims of last week’s attack in central London.
DANIEL LEAL-OLIVAS/AFP via Getty Images

What should we learn from the most recent London Bridge attack?

Convicted Islamic terrorist Usman Khan was supposed to be attending a conference on criminal justice in London. But on that day, November 29, he committed a grisly terror attack at London Bridge. For many, it brought back memories of a 2017 attack at the same location, when terrorists rammed pedestrians with a van before going on a stabbing spree. It also reminded Britain that contrary to the ideas of its justice system, releasing terrorists from prison early is a fatal mistake.

Khan, wielding a knife, stabbed and killed his first victim at the conference in Fishmonger’s Hall. He wounded another three and threatened to detonate his (fake) suicide vest. He then stabbed his second victim while attendees threw chairs in an attempt to restrain him. Only after he left the hall were members of the public able to apprehend and hold him. Khan was shot by police and died shortly after.

British officials are praising bystanders for “breathtaking heroism” in taking down the London Bridge attacker. The two victims were advocates for prison rehabilitation https://t.co/b5zNbVGSuU pic.twitter.com/uJOe31bJCR

This was not Khan’s first offense. In 2010, he was arrested for involvement in a plot to bomb the London Stock Exchange and went to jail along with eight other terrorists. Two years later, he received an indeterminate sentence. But that same year, the European Court of Human Rights ruled that indeterminate sentences violate human rights, because they deprive the convict of a chance to reform. Britain eventually followed suit and changed its law.

According to the logic of Britain’s justice system, none of what happened at London Bridge was possible. Khan had been on a police watchlist. He had to wear a global positioning system tracker and abide by a curfew. He had completed two deradicalization programs and was in a Cambridge-funded reintegration scheme. Yet all this failed to stop him.

His first victim was Jack Merrit, a Cambridge University student who had been working with Khan in a program designed to help former prisoners reintegrate into society. Khan had been a poster boy for the program; he was featured in a story about how the program allowed him to continue his education online despite strict limits on his use of the Internet.

Other failures of the justice system have since come to light. Not only was Khan let out of prison early, he was allowed to live only 17 miles from his former accomplices, who were also released in December 2018, reported the Times. Other members of that group, including one who was sent back to prison in the aftermath of the attack for breaching release conditions, lived only three miles away from each other.

Soon, what to do with convicted terrorists will become an unavoidable question. If jihadists captured in Syria with British citizenship are deported, and the government tries to reintegrate them, as it did with Khan, what is to stop another stabbing spree—or something worse?

With Britain’s general election scheduled for December 12, the attack could hardly have come at a more politically sensitive time. Khan’s early release was arranged by a prominent Labour member, Sir Keir Starmer. He was head of the Crown Prosecution Service in 2012 when it was agreed to let Khan plead guilty to only one of the charges against him. Had he been convicted of all charges, he would still have been in jail on the day he carried out the attack.

Prime Minister Boris Johnson has positioned himself as the healer of Britain’s terrorism-inflicted wounds. He blamed the Labour Party for introducing the early release system and vowed to change it, saying that if he was reelected, he would lengthen the sentence terrorists must serve to 14 years. He also promised to do away with the chance for early release.

We will end the automatic early release system for serious and violent offenders so they serve their full term in prison. pic.twitter.com/FjCYXmQQUQ

After the attack, Johnson said that current laws “have placed unacceptable limits on our intelligence services,” reported the Times. He announced his intentions to “shift the balance of the whole legal system in a much tougher direction against serious criminals and terrorists.” Meanwhile, he warned, “Jeremy Corbyn is setting out plans to weaken our system and make it more difficult for our security services to stop people who want to do us harm.”

Home Secretary Priti Patel also weighed in, promising to “go further” in protecting the public if the Tories win a majority. She advocated increased stop-and-search powers for police, and said sentencing of criminals would be hastened.

Britain has tried to reintegrate and reeducate those who hate the Western way of life. This may appear to work for awhile. After all, Khan talked about how grateful he was for access to technology. He seemed to be complying with his conditions of release. But then he went on a stabbing rampage at the site of the 2017 Islamic terror attack. Only when tragedy strikes does it become clear that Britain’s justice system needs a new strategy.

The UK’s prevent program, which aims to deradicalize or deter would-be terrorists, has an extremely low success rate. According to the Times, it initially reported a success rate higher than 90 percent—but only because the program’s employees were evaluating themselves. An impartial study by the Home Office in 2018 found that more than 95 percent of its programs were ineffective, some outright counterproductive. The study noted that staff often refused to discuss sensitive religious topics, presumably radical Islam, at the heart of the extremism they were fighting.

Increased jail time and banning the early release of terrorists is a start, but it will not be enough to solve the problem. No amount of money or government programs can stop the scourge of terrorism. All these solutions fail to account for and solve a basic problem in the human mind.

Consider this perspective on human nature. God, through the Prophet Jeremiah, calls the human heart “deceitful above all things, and desperately wicked” (Jeremiah 17:9). It wants to look good and be seen as good. But it does not want to actually do what is good.

Further, the Bible warns of exactly the problem that Britain is facing with its costly and inefficient terrorism prevention programs. Hosea 7:7-8 describe Britain today as “a cake not turned.” Trumpet editor in chief Gerald Flurry explains this apt symbolism in his free booklet Hosea—Reaping the Whirlwind, writing:

Britain may look good on the surface. But God says in verse 8 that it is like a “cake not turned”—already burned out underneath. British society lacks any real substance. We are, even now, witnessing this great calamity in Britain, the United States and other Israelitish nations. Serious crises are going to make our nations crumble suddenly, like a burned-out cake!

Britain’s crime and terrorism programs receive ample funding and claim to be effective. But then, by studies, or by tragic events like a stabbing in central London, their claims are shown to be hollow.

Britain’s unwillingness to confront its problems is described in verse 11, which calls Britain “a silly dove without heart.” The Revised Standard Version says it acts “like a dove, silly and without sense.”

When a nation avoids confronting its problems, the only possible result is more problems of greater severity. The facade can only last so long.

As Britain prepares for what many agree could be its most historic election since World War ii, you need more than ever to be aware of what the Bible’s proven and credible prophecies foretell. To understand why Britain will face more of these crises in the future, as well as why there is real hope for its future, order your free copy of Gerald Flurry’s booklet Hosea—Reaping the Whirlwind.