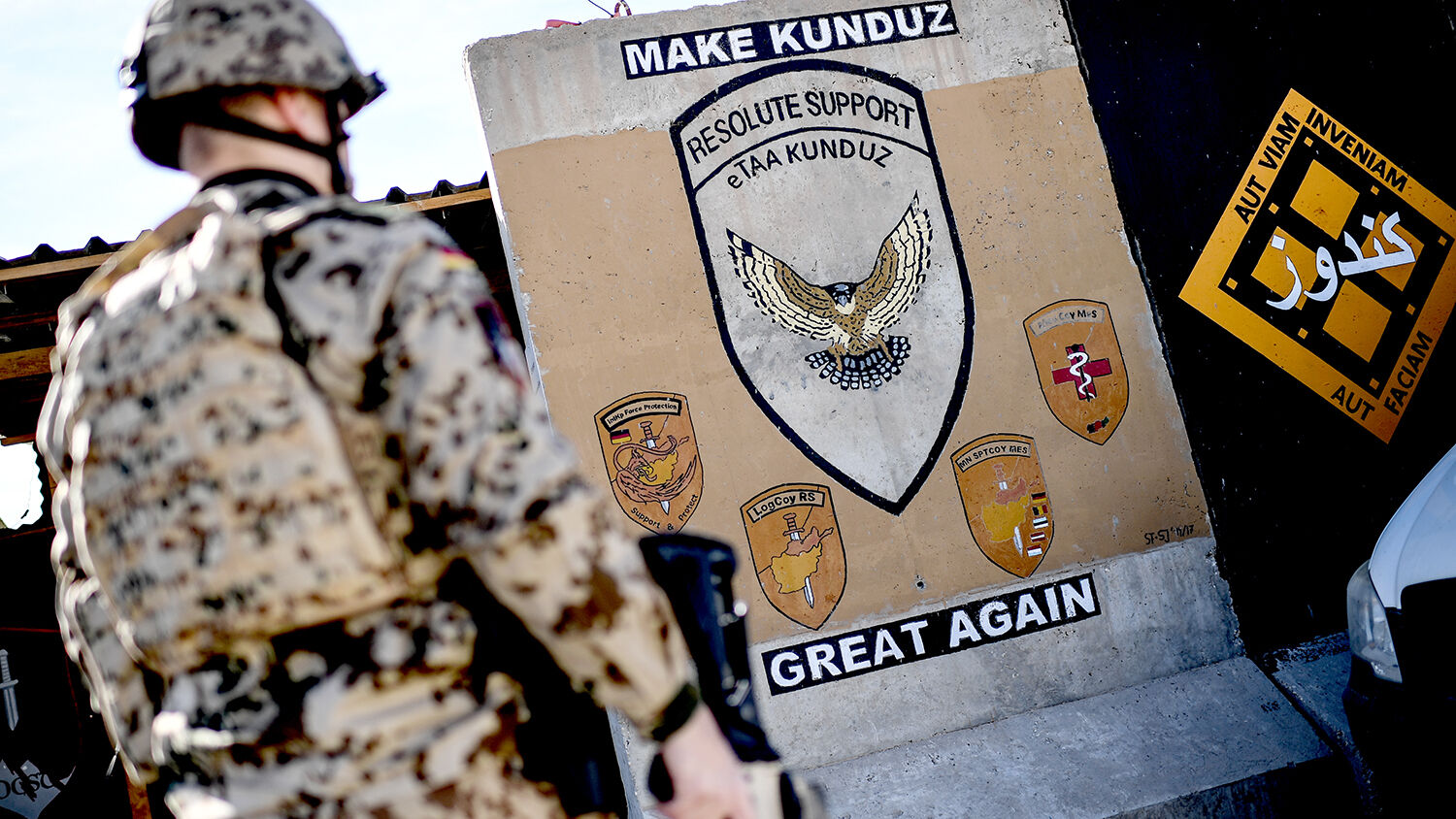 A soldier stands at the edge of a visit of the minister of defense in front of a wall part with the inscription “Make Kunduz great again” on December 4.
Britta Pedersen/picture alliance via Getty Images

On her recent trip to Afghanistan, German Defense Minister Annegret Kramp-Karrenbauer spoke in favor of supporting Germany’s troops with armed drones. So far, Germany has only used unarmed drones in the region. The new drones would provide longer flight times, better reconnaissance results, and arming capabilities. Its mission in Afghanistan is the country’s largest foreign deployment and gives a glimpse into where Germany’s peacekeeping missions are leading.

“If I take the request of the soldiers here, and I can honestly understand it, then much speaks for the armament of the drones,” Kramp-Karrenbauer said following her visit to German soldiers in Kunduz (Trumpet translation throughout).

“One has to seriously ask,” she continued, “in regards to the lives of the soldiers deployed here, if we should really refrain from using what we have at our disposal.”

Since Jan. 1, 2015, Germany has participated in Mission Resolute Support in Afghanistan; this allows the Bundeswehr to deploy up to 1,300 soldiers, who primarily provide training, leadership, advice and support in the region.

While the argument of providing better security for Germany’s troops in Afghanistan is understandable, there is more to the debate that we need to understand: Armed drones can act as stealthy, precise killing instruments.

Once Germany has approval to use armed drones for defensive purposes, its missions could easily change. To understand where Germany’s future missions will lead, you have to understand Germany’s overall goal in the region.

“The fact that Afghanistan is above all a training mission means that the German soldiers probably stay in the camp all the time of their stay, and may never once fire a shot,” Die Welt wrote on December 4. “Inside, they have to watch how once stable regions outside fall back to the enemy. The question that Kramp-Karrenbauer has to ask is: What has really been achieved? The German troops also seem to be part of the administration of an endless war.”

Germany’s mission in Afghanistan has certainly not brought the world closer to peace. But its involvement in the Middle East has allowed Germany to build strategic relations, conduct crucial reconnaissance, build infrastructure, and acquire knowledge about the complexity of warfare in the region. When you consider Germany’s long-term strategy, you realize none of this was in vain.

Germany is currently deploying 4,000 soldiers to 12 missions on three continents. The Bundeswehr is using top military equipment, such as the military transport aircraft A400M and several Tornado fighter jets.

The Tornado jets are currently providing reconnaissance and the deployed A400Ms are used mainly for air-to-air refueling. But Germany could also use its Tornado jets to carry nuclear bombs, and the A400Ms could transport hundreds of troops into remote combat zones. After years of reconnaissance and interaction with different governments, Germany is well prepared to lead strategic warfare in the region if need be.

As Trumpet editor in chief Gerald Flurry explained in “The Whirlwind Prophecy,” Germany is preparing to confront Iran militarily.

“The Iranians are so focused on conquering their own objectives that they don’t see what the Germans are doing,” Mr. Flurry wrote. “They don’t recognize how Germany is planning for the bigger war to come! No one but the Trumpet recognizes it! But the facts are visible for anyone to see.”

In his article, Mr. Flurry referred to a specific prophecy in Daniel to explain Germany’s strategy. Daniel 11:40 reads, “At the time of the end shall the king of the south push at him: and the king of the north shall come against him like a whirlwind, with chariots, and with horsemen, and with many ships; and he shall enter into the countries, and shall overflow and pass over.”

Germany’s current administration may not be poised for a dramatic turn of events, but the Bible prophesies that a coming German strongman will eventually lead its troops to war.

For years, the Trumpet has predicted that this prophesied strongman could be Karl-Theodor zu Guttenberg. During his time as Germany’s defense minister, Guttenberg was one of the strongest advocates to expand Germany’s mission in Afghanistan. If he does come to power, we can expect Germany’s foreign deployments to radically militarize.