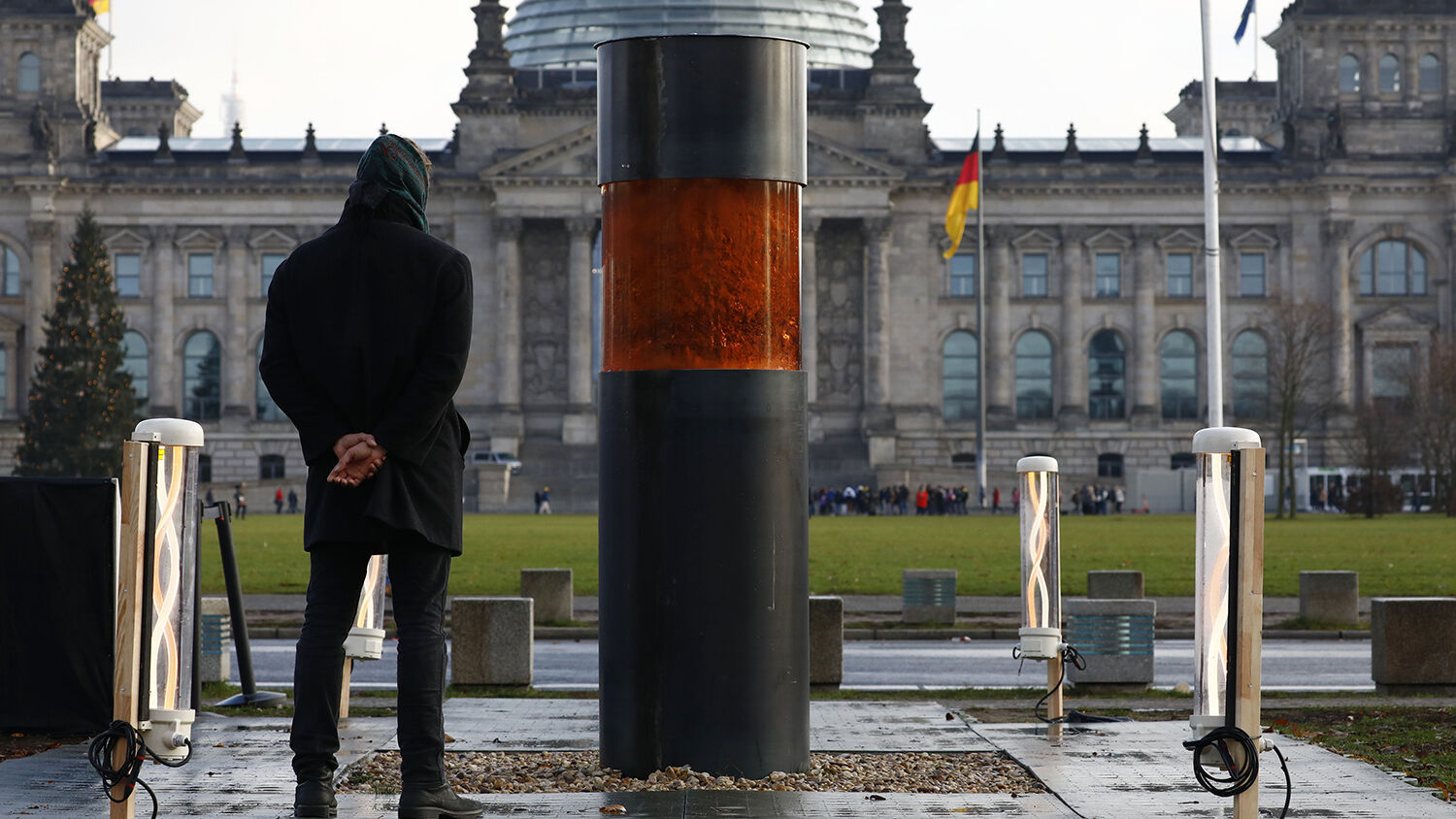 People look at the “Resistance Column” on December 3 in Berlin.
Michele Tantussi/Getty Images

A Holocaust memorial in Berlin revives the past in hopes of changing the future.

On Monday, December 2, German activists installed a so-called “Resistance Column” in front of Germany’s Reichstag building. The Center for Political Beauty (zps) claims that the installation contains the bones and ashes of Holocaust victims. “It’s about the last German dictatorship and whether it threatens us again,” said artist and zps founder Philipp Ruch.

The activists have received public attention and criticism in Germany. But the threat of another dictatorship and holocaust is real. Far-right parties and Jew-hatred is on the rise throughout Europe.

One of the primary concerns of the activists of the zps is the drastic rise of Germany’s far-right party, the Alternative für Deutschland. With the memorial, they want to send a clear message to Germany’s established parties to not cooperate with the far right.

“The group [zps] says it is a fusion of the power of imagination and the power of history,” JewishPress.com noted. “Their basic belief is that the teachings of the Holocaust are being annulled by the repetition of political indifference, especially toward refugees, and cowardice. They insist Germany must not only learn from history, but also act as if it has learned something.”

The Resistance Column will remain in Berlin until December 7. The location of the memorial was carefully selected. Reichstag members voted at that location in 1933 for the “Enabling Act,” which eventually allowed Adolf Hitler to become a dictator.

Few realize that many Jews in Europe already live under constant fears. “Synagogues in Europe’s big cities spend about a quarter of their budgets on security,” theTrumpet.com assistant managing editor Richard Palmer wrote in “The One Minority Society Loves to Hate.” “In some places, it’s as high as 50 percent. In May, German Chancellor Angela Merkel warned that every synagogue and Jewish school in Germany requires constant police protection.”

A column in the middle of Berlin will likely change nothing about that. If anything, it may even stir more hatred among far-right supporters.

Many in recent years have warned against the rise of the far right in Europe. But few realize that the real danger is more subtle.

Trumpet editor in chief Gerald Flurry explains in Daniel Unlocks Revelation that the events we currently see in Europe will lead to devastating consequences. A prophecy in Daniel 8:23 reveals that “in the latter time of their kingdom, when the transgressors are come to the full, a king of fierce countenance, and understanding dark sentences, shall stand up.” At first, this strongman will appear to bring peace, but he will suddenly destroy many (verses 24-25).

The many warning signs of another holocaust have to be taken seriously. Jews were persecuted throughout the ages. There is no indication that mankind has learned from that history. Instead, hatred is again increasing and no one seems to know the way to peace. The hope that another holocaust can be prevented through memorials is an illusion. But that doesn’t mean mankind is left without hope.

In Daniel Unlocks Revelation, Mr. Flurry explains the cause for anti-Semitism, the cause of the rise of dictators, and the cause of mankind’s evil. But he also explains that the same God who prophesied of all these evils has a plan to save mankind from all pain and suffering. You can order your free copy of Mr. Flurry’s booklet here and learn how you can have hope when all of mankind’s hopes seem to fail.