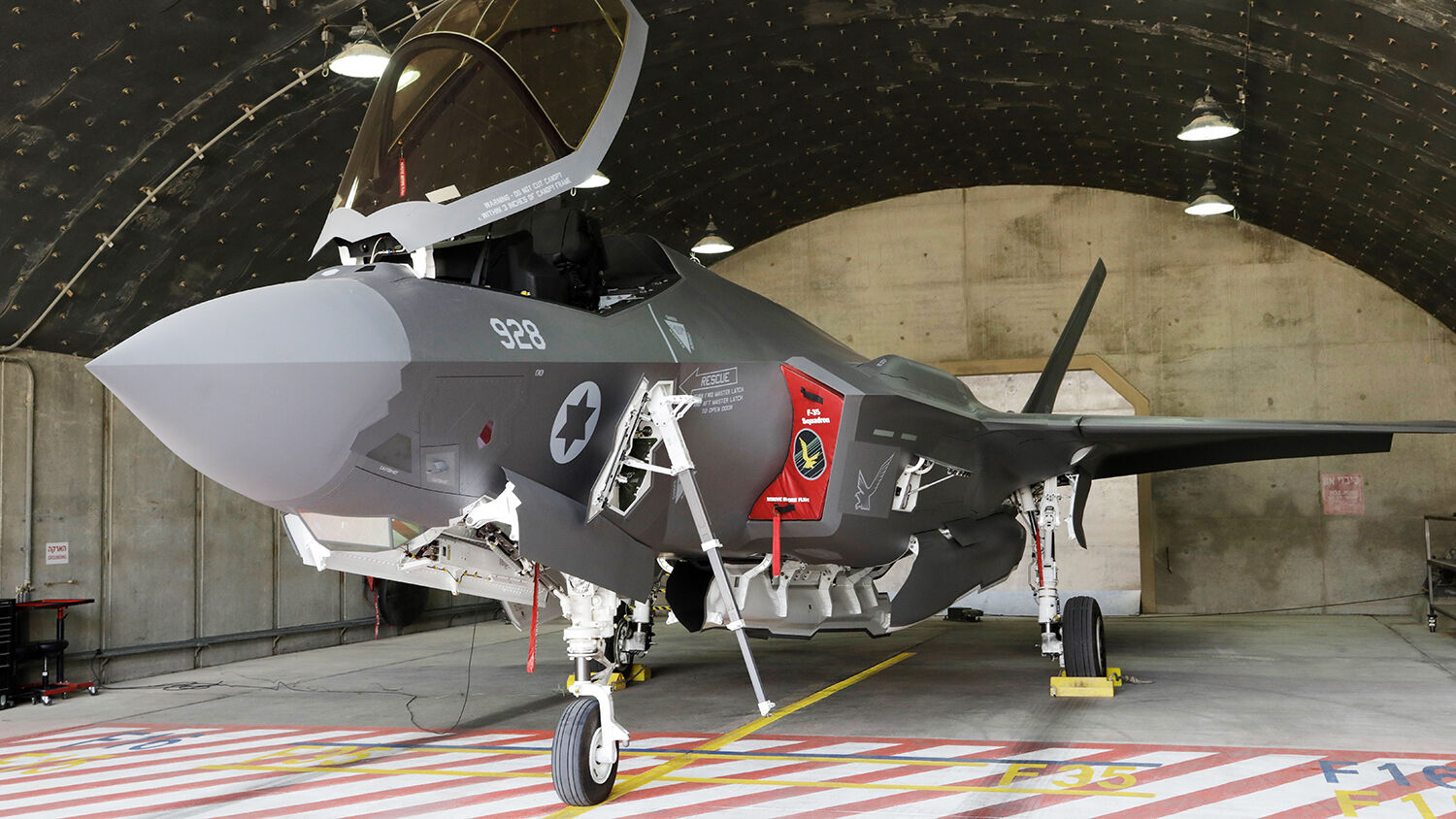 An Israeli F-35 fighter jet is seen in a hangar during the “Blue Flag” multinational aerial exercise at the Uvda air force base, north of the Israeli city of Eilat, on November 11.
EMMANUEL DUNAND/AFP via Getty Images

While Israel is under constant attacks, Germany is presenting itself as a strategic ally.

Airmen from Israel, the United States, Greece, Germany and Italy participated in the biennial multinational fighter exercise “Blue Flag 2019” for two weeks between November 3 and 14 at Uvda Air Force Base in Israel. Around 1,000 participants and 70 aircraft from the five countries held various exercises to strengthen relations and build expertise. However, the Axis power of World War ii seems to be among Israel’s most trusted friends. The “most advanced air drill” was with Germany, and Italy’s participation held great significance.

By the end of the exercise “other jets from the Israel Air Force were busy striking Palestinian Islamic Jihad targets in the Gaza Strip as rockets flew in the direction of Israeli cities,” Israel Hayom reported. “Yet the air forces of the United States, Germany, Italy and Greece joined Israeli flight crews and completed the joint training as planned.”

The first “5th Generation” exercise with F35s held in Israel has begun! Our German, Italian, Greek & American counterparts will fly the Israeli skies as we train, learn & improve together.

This is Blue Flag pic.twitter.com/xJpfQsbRIf

While Israel faces continued terror in the Middle East, it seeks to advance its defense capabilities with help of Western allies. Prior to the drill, the Israel Defense Forces (idf) released a statement highlighting how vital these exercises are for the Jewish state:

[T]he exercise is of paramount strategic importance and will have a significant impact on the Israeli Air Force, the idf and the State of Israel. The iaf is practicing and will continue to practice in collaboration with foreign air forces to maintain its competence and readiness, to strengthen the ties and interests between the forces, and to encourage and strengthen the joint learning between the forces.

The cooperation will enable high-quality international training, mutual learning, and study of flight techniques, providing an opportunity to strengthen relations between the participating countries.

“The multinational aspect of the training builds partnership and personal relationships among the pilots of each participating nation as they train together to make each pilot better,” Cope commented.

Especially in regards to Germany’s relationship with Israel, this cooperation is filled with emotion and hope. “We started doing a squadron exchange,” said German Air Force Lt. Col. Manuel Last. “We flew with the Israeli Air Force. One of our pilots flew in an Israeli F-16 and we took one of their pilots in our Eurofighter. It was kind of emotional; it was a great experience. And I really honor the professionalism of the Israeli Air Force.”

Germany first participated in “Blue Flag” in 2017. Deutschlandfunk asked Itamar, Israel’s base commander at Uvda, what the term Luftwaffe means to him: “Every cooperation with Germany and Israel is very emotional,” he answered. “And this is also true for this project. I was there as the six fighter jets rolled into our hangars. We can’t eliminate the past. But we are looking forward. And the relationship of our aircrafts is based on trust” (Trumpet translation throughout).

Trust is an important word here. Israelis today trust in the countries that once sought their extinction. Germany and Italy once joined forces to kill all Jews. But today, they have built a strategic alliance with the Jewish state. It appears as if a horrible chapter in mankind’s history has reached a happy conclusion. But this conclusion isn’t yet written.

Anti-Semitism is reaching new heights all over Europe. Hatred against Israel is spreading like a cancer in various online forums. Jews today not only fear terrorist attacks in the Middle East but also persecution in Europe. “Blue Flag 2019” may appear to be a sign of hope that Europe’s respective militaries stand with Israel. Israel and Europe may even have a common enemy in Iran and Islamic terrorism. But the Bible reveals this cooperation is most deceitful.

Many Jews have lost faith in the God of the Bible. Instead, they trust in other nations for protection. (Even nations who once sought to destroy them.) Reconciliation is something that everyone hopes for, but the Bible reveals that such reconciliation won’t come unless people repent from forsaking His ways!

There is great hope yet ahead, but the greatest suffering ever has yet to happen! The Bible reveals that World War ii was only a prelude to what is about to hit this world.

Daniel 11:40-41, 45 read: “And at the time of the end shall the king of the south push at him: and the king of the north shall come against him like a whirlwind, with chariots, and with horsemen, and with many ships; and he shall enter into the countries, and shall overflow and pass over. He shall enter also into the glorious land, and many countries shall be overthrown: … And he shall plant the tabernacles of his palace between the seas in the glorious holy mountain; yet he shall come to his end, and none shall help him.” “The king of the south” in this prophecy refers to Iran and its radical allies who will be attacked by a German-led Europe, or “the king of the north.” (For a clear explanation, read Trumpet editor in chief Gerald Flurry’s booklet The King of the South.)

As far as Iran is concerned, Israel’s and Germany’s interests overlap. But notice: Catholic Europe is again seeking control of the Holy Land. But verse 41 indicates that this time Israel will invite Germany as a peacekeeping force. But this will be to their demise.

Instead of repenting and turning to God, Israel trusts its former enemies. God uses Germany to punish Israel by allowing the country’s hatred for the Jewish people to once again boil over (Jeremiah 1:13-14).

Germany’s cooperation with and betrayal of Israel has been prophesied. But while the imminent future will be marked by betrayals, wars and great horrors, the Bible also gives great hope. To learn about the coming prophesied calamity and the hope that you need to have to see God’s hand in it, request your free copy of The King of the South, by Gerald Flurry.