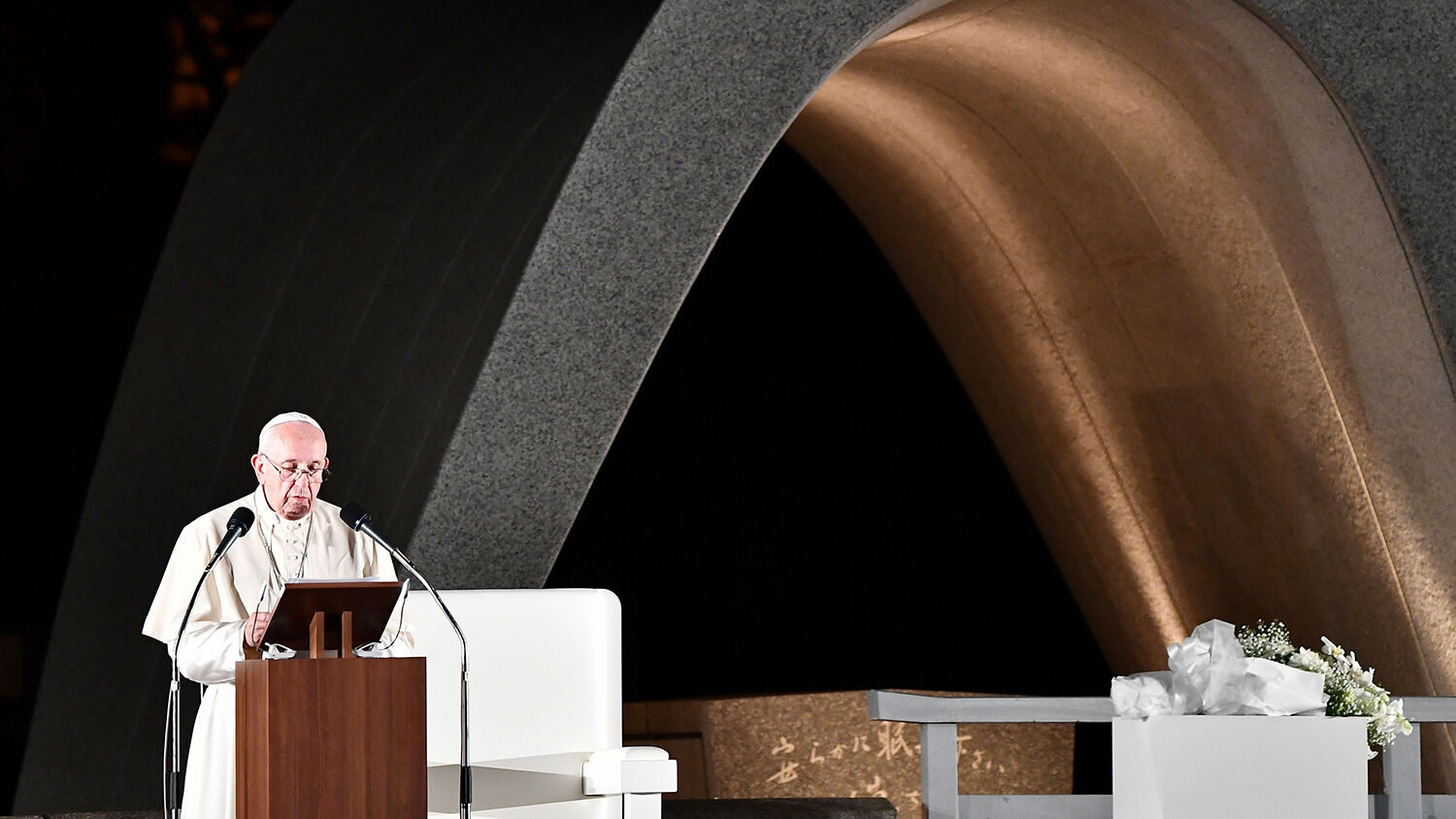 Pope Francis speaks near the cenotaph in memory of those killed in the 1945 atomic bombing during an event held at the Peace Memorial Park in Hiroshima on November 24.
VINCENZO PINTO/AFP via Getty Images

The pope isn’t against nuclear weapons—he is against America.

Pope Francis visited Japan on November 23-26 to commemorate the bombings of Hiroshima and Nagasaki. In front of crowds in both cities, the pope took thinly veiled shots at the United States by declaring not only the use but the mere possession of these weapons as “immoral.”

His message was clear. “The use of atomic energy for purposes of war is immoral. As is the possession of atomic weapons,” he said on November 24. On his flight home from Japan, he announced that his declaration against possessing nuclear weapons will be added to the catechism, reported Vatican News.

Does the pope want America to give up its nuclear weapons?

Speaking on the flight back to Italy, Pope Francis again targeted the U.S. He stated that “international organizations don’t succeed” at stopping the spread of conflicts, because of the veto power given to certain nations. One of the most prominent users of that power is the U.S.

No other pope has called the very possession of atomic weapons immoral and “to be condemned.” His predecessors have stated, without controversy, that nuclear weapons should stay in their silos and never see the light of day. But Francis has gone a step further, condemning even their possession.

Pope Francis may not wear a suit and tie, but he is still a political player of global consequence. His choice of where to break this precedent was significant.

“When The Man in White speaks, the world’s leaders pay attention,” wrote independent Catholic journalist Rocco Palmo. He described the effect the pope’s choice of location had, saying that it “amplified the already formidable heft of his office with the powerful optics of Ground Zero” in these two famous cities.

For Japan, the pope’s message was “about as close as you’ll get to an on-site Vatican intervention in domestic politics,” he said. But Pope Francis has also meddled in American politics. He was giving this speech where America used nuclear weapons to end a world war. This was more than just a general criticism of nuclear weapons—implicit in his speech was criticism of America for using nuclear weapons to end World War ii. Put this latest speech in context with other papal pronouncements and the trend is clear.

In 2015, he was the instrumental mediator in reviving U.S.-Cuba relations, an arrangement that benefited neither Cuba nor the U.S. In 2016, he meddled in the American elections by staging a photo-op in front of the American border with Mexico. Asked about the promise of then candidate Donald Trump to build a border wall, the pope replied that “a person who thinks only about building walls, wherever they may be, and not building bridges, is not Christian.”

The pope is not on America’s side. In “Why Is the Pope Meddling in American Politics?”, Trumpet editor in chief Gerald Flurry chronicled the many occasions on which Pope Francis has shown by words and deeds that he wishes to weaken the U.S. Mr. Flurry wrote:

Francis called free-market global capitalism “a new tyranny” and condemned it as “a financial system which rules rather than serves.” He has also called it “the dung of the devil.”

Which nation is the front-runner of free-market global capitalism? The United States of America.

If Pope Francis is to be taken at his word, he could not possibly wish for the leader of the capitalist system to thrive and prosper, continuing to inflict its “tyranny” on the world. If he believes the free market is a force of destruction, then he would feel not only justified, but obligated to use his power to weaken it.

Early on in his tenure, Pope Francis advocated for the downfall of capitalism while pushing for his “third way” economic model.

From the U.S.-Cuba deal and national elections to sending global messages about American nuclear power, the pope continues to work against America. What does he ultimately aim to achieve?

Bible prophecy gives a coherent explanation of why Pope Francis is involved in politics.

But people do not understand prophecy because “key portions of the Bible are written in symbol,” Mr. Flurry wrote. “The Bible is full of passages where God uses a physical object to portray a spiritual truth or concept. … In biblical symbolism, a woman is a type of a church.”

The church he is discussing is found in Revelation 17. God describes it as one “with whom the kings of the earth have committed fornication, and the inhabitants of the earth have been made drunk with the wine of her fornication” (verse 2). This symbolic language tells us that a church is involved in world politics. This can refer to none other than the Catholic Church.

This should be deeply concerning to the United States, and for more than political reasons alone. Revelation 17 portrays this false church riding a beast, symbolizing its control over the revived Holy Roman Empire, which has ruled Europe throughout much of its history. Its seventh and final revival is already in progress and will burst onto the world scene in a few short years, bringing nuclear destruction to the U.S. and Britain (for detailed proof, request our free book The Holy Roman Empire in Prophecy).

When this anti-American superpower is fully formed, it will be too late for the U.S. and Britain. But you can avoid the suffering that this deadly combination of church and state will bring.

For more information on how the Catholic Church will make the seventh resurrection of the Holy Roman Empire a reality, and why this should be a stark warning to America, read “Why Is the Pope Meddling in American Politics?” by Gerald Flurry.