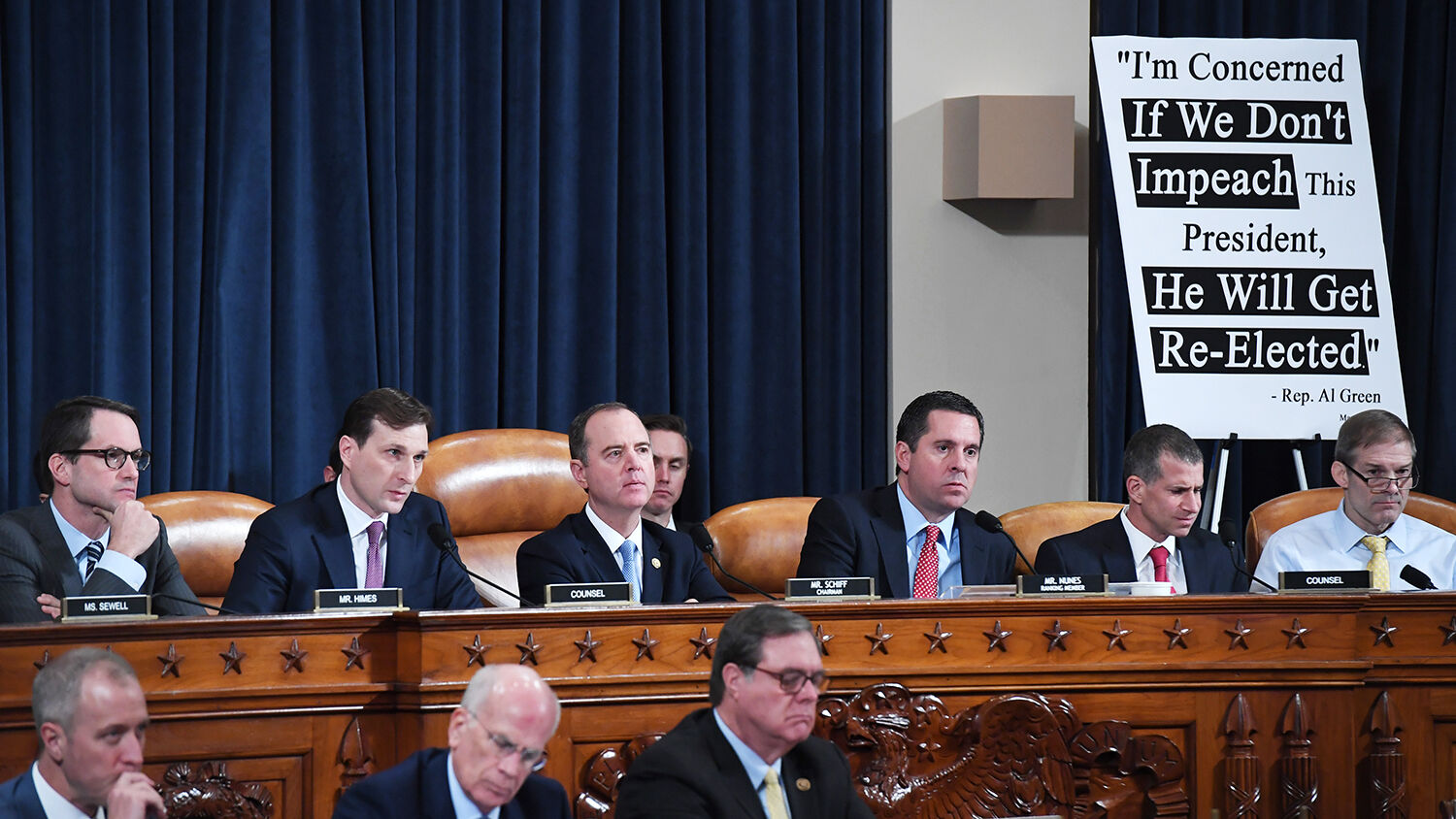 The impeachment inquiry launched against Donald Trump is based on lies and corruption. And it is revealing the lawlessness of the radical left.

United States House of Representatives Speaker Nancy Pelosi launched an official impeachment inquiry into U.S. President Donald Trump on September 24. This attack on the executive office is revealing the left’s agenda (in the words of Attorney General William Barr): “the systematic shredding of norms and undermining the rule of law.”

When announcing the impeachment inquiry, Pelosi stated that the president’s actions during a July 25 phone call with Ukrainian President Volodymyr Zelensky “revealed the dishonorable fact of the president’s betrayal of his oath of office, betrayal of our national security, and betrayal of the integrity of our elections.”

However, Democrats have admitted that their aim in impeaching the president is to stop him winning the 2020 election. Rep. Cedric Richmond said, “My sole focus right now is to make sure that he is not the president next term.” Pelosi said, “We cannot accept a second term for Donald Trump.” Rep. Al Green said, “If we don’t impeach this president, he will get reelected.” In other words, If you can’t beat him, impeach him.

From the very start of Mr. Trump’s presidency, the whistleblower’s attorney was calling for impeachment. Ten days after Trump was inaugurated in 2017, he tweeted:

Not only is the whistleblower’s legal team strong anti-Trump partisans, but the whistleblower himself has a long history of opposing President Trump. In 2016, the whistleblower, now identified as Eric Ciaramella, worked as then President Barack Obama’s director for Ukraine on the National Security Council. He is reported to have been a strong supporter of the Trump-Russia collusion theories. He is believed to have leaked confidential information on Trump’s conversations with Russian diplomat Sergei Lavrov and issued an accusation that Trump fired Federal Bureau of Investigation director James Comey at Russia’s request, leading to the failed Mueller investigation.

It has taken 2½ years, a failed Trump-Russia collusion scandal, the failed Comey investigation and the failed Mueller investigation to finally reach an impeachment inquiry—their aim since the day Trump was elected.

In Ciaramella’s complaint about the July 25 phone call, he accused Trump of pressuring his Ukrainian counterpart “to investigate one of the president’s main domestic political rivals … to help the president’s 2020 reelection bid.” He also accused the president of providing Zelensky with a quid pro quo: either Zelensky agreed to investigate or America would withhold military aid.

These accusations were based on hearsay. The whistleblower admitted that he was not a direct witness of the phone call. When Pelosi announced the inquiry, the transcript of the call had not been released. When Trump unexpectedly declassified the transcript, the Democrats started saying that the transcript didn’t really matter. When the released transcript failed to support their accusations, some Democrats began adding to the transcript.

Appearing to read from the transcript, Rep. Adam Schiff’s opening statement of the impeachment inquiry was as follows:

[T]his is the essence of what the president communicates: “We’ve been very good to your country. Very good. No other country has done as much as we have. But you know what? I don’t see much reciprocity here. I hear what you want. I have a favor I want from you, though. And I’m going to say this only seven times, so you better listen good. I want you to make up dirt on my political opponent, understand? Lots of it. On this and on that. I’m going to put you in touch with people, not just any people. I’m going to put you in touch with the attorney general of the United States, my Attorney General Bill Barr. He’s got the whole weight of the American law enforcement behind him. And I’m going to put you in touch with Rudy. You’re going to love him, trust me. You know what I’m asking and so I’m only going to say this a few more times, in a few more ways. And by the way, don’t call me again. I’ll call you when you’ve done what I asked.” This is, in sum and character, what the president was trying to communicate with the president of Ukraine. It would be funny if it wasn’t such a graphic betrayal of the president’s oath of office.

Stephen Flurry responded to Schiff’s comments on his September 27 Trumpet Daily program: “This is what the conversation, in his mind, meant. … If the conversation itself was so damning, then why not just read directly from it? You’ve got the words. You’ve got the transcript. … He knows what the president meant, and he knows how the Ukraine president received it. He knows what’s going on in both minds!” Schiff thinks he can make up what was said in the phone call because somehow he knows both the intent of the president’s words and how Ukraine’s president interpreted it.

The actual transcript paints a very different story. President Trump never once mentioned withholding military aid to Ukraine. At the time of the call, military aid had been frozen, but President Zelensky admitted that he had not been aware of this and said there was “no blackmail” in the call.

The second accusation against Trump was that he sought to undermine his political rival Joe Biden to give himself advantage in the 2020 elections. Or in Schiff’s version of the transcript, “I want you to make up dirt on my political opponent, understand? Lots of it.” Here is how the transcript actually reads:

President Trump did ask Zelensky to investigate Joe Biden, but on accusations of political corruption.

In 2018, Biden bragged publicly about threatening to withhold $1 billion in aid to Ukraine unless they fired the prosecutor investigating corruption in the Ukrainian gas company Burisma Holdings. Biden’s son Hunter worked on the board of this company and received over $3 million from the company. Needless to say, the prosecutor was fired and the investigation later closed.

In a recording easily accessible online, Biden bragged about withholding aid, exactly what Trump was accused of. And Biden’s son benefited.

The impeachment inquiry has not found any incriminating evidence against Trump. It has, however, revealed the lawlessness in the Democratic Party. Even before its launch, the inquiry has been mired in corruption and lies. It is an unfounded attempt to bring down, not just the president, but the entire United States of America.

A prophecy in Isaiah 1:4-6 perfectly illustrates the state of America today: “Ah sinful nation, a people laden with iniquity, a seed of evildoers, children that are corrupters: they have forsaken the Lord, they have provoked the Holy One of Israel unto anger, they are gone away backward. Why should ye be stricken any more? ye will revolt more and more: the whole head is sick, and the whole heart faint. From the sole of the foot even unto the head there is no soundness in it; but wounds, and bruises, and putrifying sores: they have not been closed, neither bound up, neither mollified with ointment.”

America is full of sin and “the whole head is sick”—this is talking about the corruption in the government.

Since Donald Trump became president, a dangerous level of corruption has been exposed in America’s federal government. Officials within several powerful government agencies have worked actively to sabotage Mr. Trump and overturn the results of the 2016 presidential election. This is treasonous behavior, and a bigger threat to America than most people realize! … We are getting a stark look at just how grave this sickness is!

This is the state of America today, and under the presidency of Donald Trump, it is being exposed. This impeachment inquiry is revealing the sickness in our nation and especially in the government.

To learn where all this is leading, read Mr. Flurry’s article “Can President Trump Get Control of His Own Divided Government?”