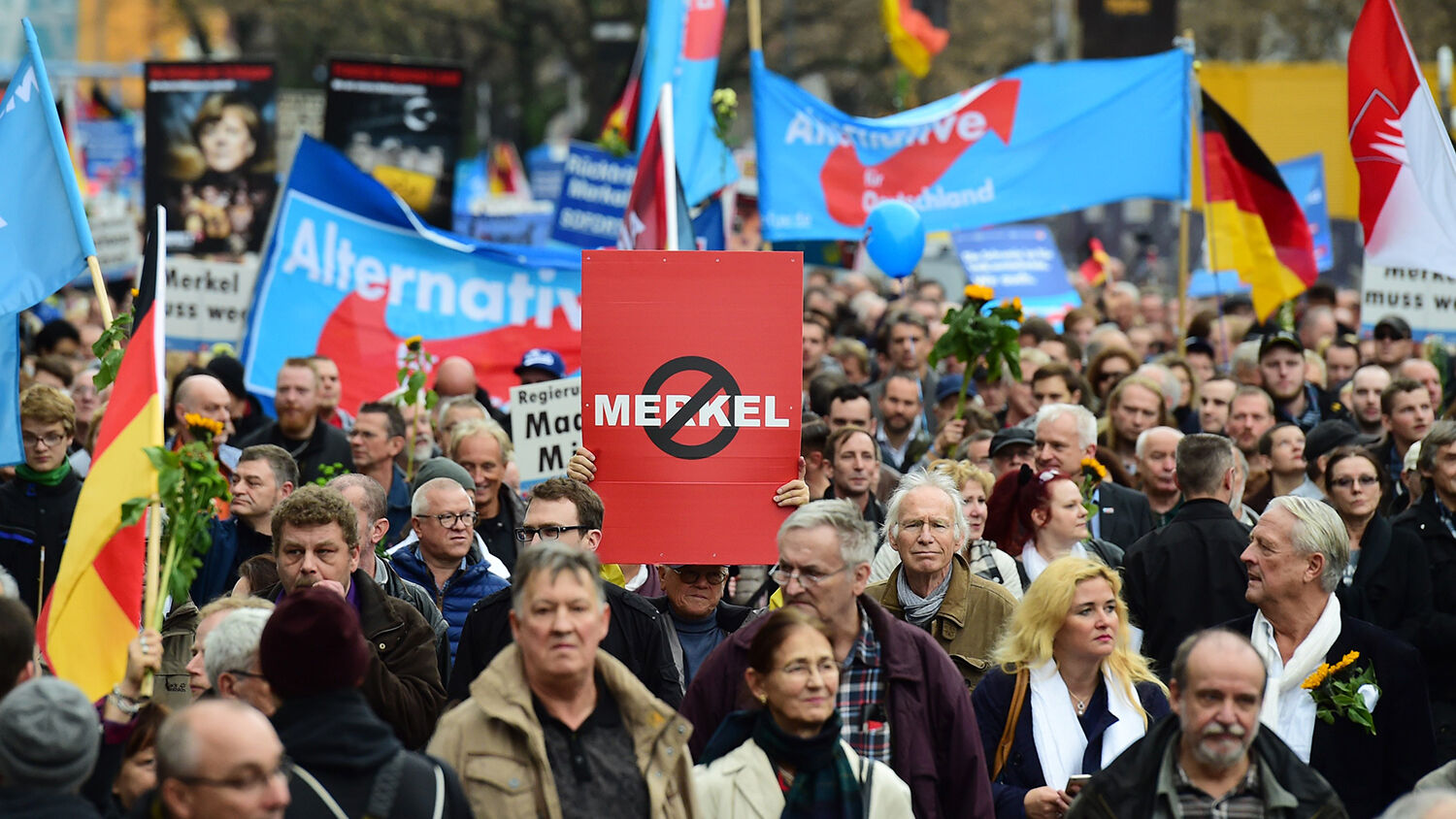 A supporter of the right-wing Alternative für Deutschland (AfD) party displays an anti-Merkel placard during a demonstration against the government’s asylum policy organized by the AfD in Berlin on Nov. 7, 2015.
JOHN MACDOUGALL/AFP via Getty Images

‘Confidence in the government’s performance, as well as political stability, has fallen in almost a landslide.’

According to a study by the opinion research institute Allensbach, in just over two years, millions of Germans have lost trust in their government. They are yearning for leadership change, but it seems no hope is in sight. But history shows that such a yearning is laying the foundation for the rise of a German strongman.

During the last legislative period (2013–2017), 49 percent of Germans believed the quality of the government was one of the nation’s strengths. Today, that number has fallen to 26 percent. Confidence in political stability fell from 81 percent to 57 percent.

What do you consider a strength of Germany?

“There is also a large difference between Eastern and Western Germany when it comes to the question of whether we have a strong or weak state,” Bild.de noted (Trumpet translation throughout). Seventy-three percent of East Germans believe the government is too weak, compared to 54 percent of West Germans.

Although there is a gap between the East and West, overall most Germans want a stronger government.

Prof. Renate Köcher, director of the Allensbach Institute, wrote in the Frankfurter Allgemeine Zeitung: “Confidence in the government’s performance, as well as the [nation’s] political stability, has fallen in almost a landslide.”

Usually, people in a democratic country put their hope in the next election. “However, this hope is currently remarkably low in the population,” Köcher noted. “Only around 20 percent of citizens are associating new elections with good chances that they will lead to a strong, effective government.”

That’s a bleak outlook for the population of a democratic nation. In such times, a strongman who promises change has the highest chance to come to power.

When democracies fail, dictators rise. This happened in Germany in the lead-up to World War ii.

The Bible reveals it will happen again.

Daniel 11:21 prophesies that a German strongman will rise in this political turmoil, “to whom they shall not give the honour of the kingdom: but he shall come in peaceably, and obtain the kingdom by flatteries.” As Trumpet editor in chief Gerald Flurry explains in his free booklet Daniel Unlocks Revelation, this prophecy is for our time today.

The once-stable German Chancellor Angela Merkel and her party, the Christian Democratic Union, are losing support as they make unpopular decisions. Germany is groaning for different leadership. It will get the leadership it is asking for very soon.

Read “Watch Germany!” to understand what lies ahead for the German people. In that article, Mr. Flurry wrote: “The refugee crisis and the turmoil within Germany’s two conservative parties … provide probably one of the greatest opportunities ever for a new leader to come into power ‘by flatteries.’” Watch Germany closely. It will soon undergo a dramatic change.