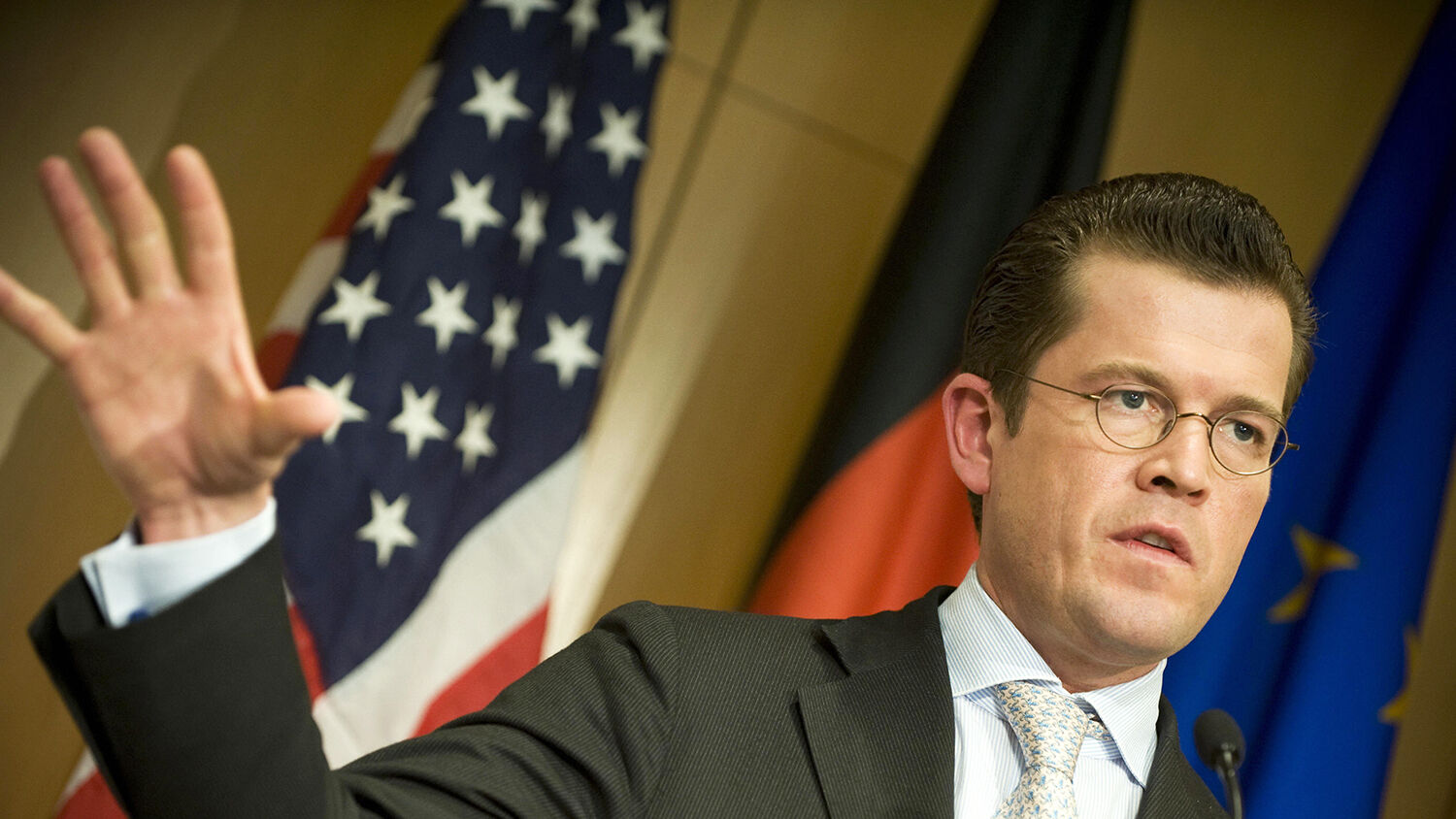 Germany and the U.S. need each other … for now.

Since the inauguration of United States President Donald Trump, relations between Germany and the U.S. have declined drastically. President Trump’s main criticisms revolve around Germany’s slacking contributions to the North Atlantic Treaty Organization and its unfair trade policies. German politicians and journalists portray Trump as the greatest threat to the liberal world order. Many see future cooperation as nearly impossible. Rising in the midst of all the tension to provide a solution is one man who boasts fame on both sides of the Atlantic—Karl-Theodor zu Guttenberg.

Guttenberg has spent much of his political career working to improve the trans-Atlantic relationship. From age 16 to 17, he spent a year in the U.S. with a group of other students. During his visit, he met with former U.S. Secretary of State Henry Kissinger, who was a friend of his grandfather.

Guttenberg’s ties to America were evident during his political career. In 2003, he joined the American-German Young Leaders of the nonprofit association Atlantik-Brücke. He continues to serve on the board of directors of the American Council on Germany.

After resigning from political office in 2011, Guttenberg moved to the U.S. and joined the Center for Strategic and International Studies (csis) as a distinguished statesman. “Karl-Theodor’s energy, enthusiasm, and deep commitment to the trans-Atlantic partnership will be of tremendous value to csis during his tenure,” csis president and ceo John Hamre said.

After leaving Germany, Guttenberg also founded Spitzberg Partners, a consultancy and investment firm. Headquartered in New York, the firm is designed to give business “a strong perspective in trans-Atlantic and emerging markets,” according to the organization’s website.

Guttenberg is so well connected with trans-Atlantic networks that some believe the U.S. has used him to influence German politics. One proponent of view is journalist Friederike Beck, author of Das Guttenberg Dossier.

Since the election of Donald Trump, people have been increasingly more interested in Guttenberg’s strategic insight. News media on both sides of the Atlantic have repeatedly asked him for interviews. Politicians have asked for his advice. He often explains President Trump to Germany and Germany’s policies to the U.S.

Although Guttenberg criticizes Trump’s “erratic” nature, calling him “a jack-in-the-box,” he enjoys great favor in America. Guttenberg speaks often on Fox Business and has occasionally appeared on cnbc and cnn International. For a glimpse of the favor Guttenberg is given, watch the below video of his visit to the Mornings With Maria show.

On the other side of the Atlantic, Guttenberg receives similar favor from Germany’s media and various politicians. Even Chancellor Angela Merkel regularly seeks Guttenberg’s advice, despite him being one of her strongest critics. The two occasionally meet and are in regular contact.

Guttenberg believes that Germany and the U.S. need to cooperate more closely in trade and foreign policy. He believes that if such cooperation fails, only Russia, China and Iran will benefit.

Despite the strained relations, both sides recognize the necessity of cooperation, and Guttenberg is able to work as somewhat of a mediator between the two powers.

There are, however, a few warning signs that Guttenberg is not a friend of America, as many in the U.S. perceive him to be.

Part of the reason so many in Germany oppose President Trump is because he has exposed how Germany has taken unfair advantage of America’s generosity. The president promotes an America-first policy, pushing back against many other countries. It is possible that without Trump, the U.S. could have already collapsed economically. (For a detailed explanation, read Trumpet editor in chief Gerald Flurry’s article “Saving America From the Radical Left—Temporarily.”)

Guttenberg’s criticism against Trump is not directed against one person only, but against the approximately 63 million Americans who voted him into office. This shows great disdain for America’s postwar role. Many European leaders have hoped for years that the European Union would replace the U.S. as the world’s global leader. President Trump is a major obstacle in achieving that goal.

Guttenberg does not advocate for a U.S.-Europe relationship of the past. Instead, he promotes a much stronger, more assertive and independent EU led by Germany. He wants to see a German-led Europe rise to greatness. In his view, Europe’s current leadership is failing to bring this about.

When rivals like Russia and China are taken into consideration, however, it’s clear that Germany could never have achieved such a goal without America. Russia was determined to destroy Germany, both economically and militarily, after World War ii. America, on the other hand, built Germany back up.

But what if a German-led European superpower no longer needs U.S. economic and military support? What if Europe gains enough strength to face off Asia’s giants and position itself as a world superpower? Will Europe’s relationship with the U.S. continue to be built on cooperation?

Europe has almost reached the point where it can stand on its own. Many in Europe are already calling for ties to be cut with the U.S. Not least among these are French President Emmanuel Macron and German Foreign Minister Heiko Maas. But Guttenberg advocates for a different approach. He believes the two continents should continue to strengthen their ties—but for a dangerous and deceitful purpose.

To truly understand the German-American relationship, you have to look to the Holy Bible.

In The United States and Britain in Prophecy, the late theologian Herbert W. Armstrong proved the biblical identity of various modern nations, particularly the nations of Israel (primarily America, Britain and the Jewish nation in the Middle East today). This book gives the foundational understanding of the Bible’s various prophecies. One of these prophecies specifically states that Assyria, modern-day Germany, will betray America.

Notice Ezekiel 23:9: “Wherefore I have delivered her into the hand of her lovers, into the hand of the Assyrians, upon whom she doted.” This is a prophecy about Germany double-crossing America. In Ezekiel: The End-Time Prophet, Mr. Flurry writes:

For decades, Germany and the U.S. have been allies. They have shared military strategies and technologies on a level that demands a high level of trust. And though it may not seem this way today, many Americans still love Germany. According to a 2018 survey by the Körber Foundation and Pew Research, 70 percent of Americans described relations with Germany as “somewhat good” or “very good.” America’s positive take on its relationship with Germany is displayed in “The Year of German-American Friendship.” This initiative is intended to showcase that the two countries stand “Wunderbar Together.” America began hosting the initiative at the end of 2018. One thousand events throughout the 50 American states have celebrated the German-American friendship.

In stark contrast, the same 2018 Körber Foundation and Pew Research study found that 73 percent of Germans saw Germany’s relationship with America as “somewhat bad” or “very bad.” Germany could be prepared to commit a double cross against America.

In A Strong German Leader Is Imminent, Mr. Flurry explains why we expect Guttenberg may lead Germany in the very near future. Under his leadership, German-U.S. relations may improve for a short period of time, but the Bible prophesies that a betrayal is looming.

God’s people have sinned against Him. God, therefore, prophesied that He would bring their punishment through their “lovers” in whom they trust. For decades the Trumpet and its predecessor, the Plain Truth under Herbert W. Armstrong, proclaimed God’s warning, but the vast majority of those who heard the message have refused to repent. Soon, America and Britain will face their punishment in the form of an unexpected German-led military attack. Isaiah 10:5 refers to Germany as the rod of God’s anger and the staff of His indignation. God is angry with the sins that Israel is committing, and He is sending punishment.

Even as Guttenberg seeks to improve U.S.-German relations, he is also one of the greatest advocates of a much stronger German-led European military.

As I explain in “‘Wunderbar Together’: From Illusion to Reality,” the Bible is not a book of gloom and doom, God will bring about wonderful cooperation between these two countries. But before that, mankind must learn the hard way to follow God’s law. Request your free copy of Ezekiel: The End-Time Prophet to learn more about these prophecies and the wonderful future they ultimately lead to.