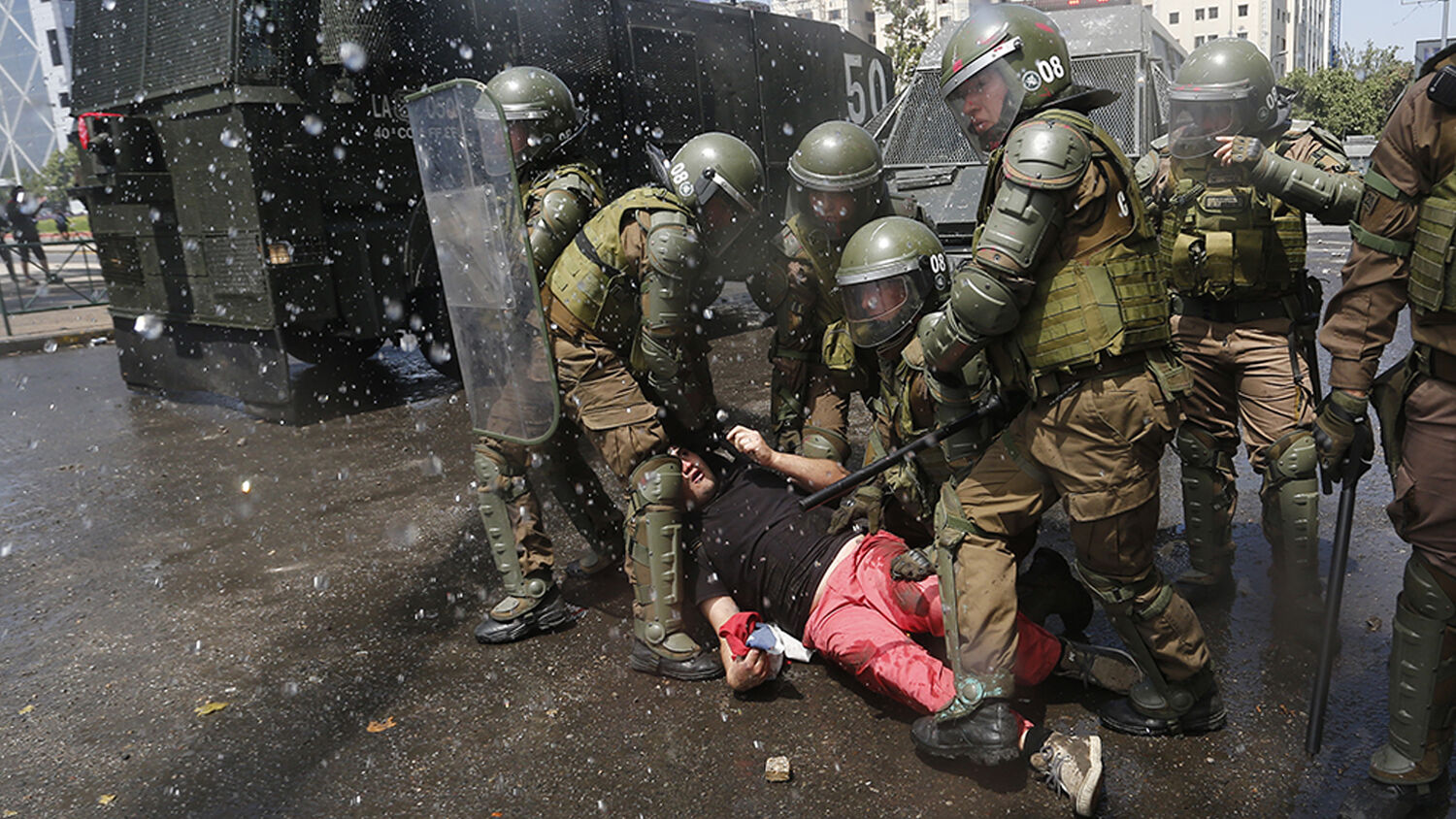 Anti-government demonstrators clash with police on October 20 in Santiago, Chile, as they protest cost of living increases.
Getty Images

Dissatisfied with liberal democracy, an increasing number of people yearn for a political strongman to solve their problems.

While the motivations behind the protests taking place are different, the government response to them has been the same. To meet the threat of civil unrest, governments are turning to their militaries. Latin America was once the land of the military junta. Now it is becoming the land of militarized democracies.

The government of Chile deployed tanks and soldiers into the streets of Santiago to discourage protests. And when Chilean President Sebastián Piñera went on television to extend Chile’s state of emergency on October 21, military officers surrounded him. Two weeks earlier, Ecuadorans witnessed a similar scene. As demonstrations against Ecuador’s austerity program spiraled out of control, President Lenín Moreno appeared on television surrounded by a cabal of generals to impose a nationwide state of emergency.

Venezuelan President Nicolás Maduro would likely have been ousted from power by protesters five years ago were it not for the support he receives from Venezuela’s military. Bolivia’s socialist president, Evo Morales, tried to follow Maduro’s example and deployed the Bolivian Army against those protesting election rigging. But the Army turned against Morales last Sunday, forcing him to resign and call fresh elections.

Brazil has not relied on its military to quell dissent to the extent that many of its neighboring counties have. Yet one of Brazilian President Jair Bolsonaro’s sons recently suggested that his father’s government may have to adopt dictatorship-era tactics if they are deemed necessary to control street protests—tactics such as stripping opposition lawmakers of political rights and suspending some constitutional guarantees.

During the late 1970s, dictators ruled 17 out of 20 Latin American nations. Today, every Latin American nation except Cuba and Venezuela are considered democracies. But an increasing number of people yearn for a political strongman who can solve problems like corruption, crime and inequality.

People from the following nations were most likely to say it does not matter whether a nation has a democratic government or not: El Salvador (54 percent), Honduras (41 percent), Brazil (41 percent), Mexico (38 percent), Panama (34 percent), Guatemala (34 percent) and the Dominican Republic (29 percent).

In Brazil, many people are actually looking back with nostalgia to the time of the Holy Roman Empire.

Roughly 11 percent of Brazilians would like to see this happen.

Latin America and the world are headed for an age of strongmen. The Bible prophesies that 10 kings (or dictators) will partner with a false church and lend it their political and military power. The late Herbert W. Armstrong explained in his classic booklet Who or What Is the Prophetic Beast? that these kings are 10 authoritarian leaders who will reign over a union of 10 European nations just before Jesus Christ’s return.

Roman Catholicism will be the ideological glue that binds these 10 nations together; that religion will also bind other nations to this empire. Latin America has the largest population of Catholics in the world. The Holy Roman Empire colonized Brazil and the rest of Latin America in the 16th century. Based on these facts, Mr. Armstrong prophesied for decades that Europe would develop an increasingly powerful alliance with South America.

The nations of Latin America will turn their backs on American-style democracy. They may even turn to some authoritarian leaders of their own, caudillos with the power to carry out Europe’s agenda in Latin America.

Revelation 17 and Isaiah 47 refer to the power of the Holy Roman Empire. This power, known as “Mystery, Babylon the Great” in Revelation, is referred to as the “daughter of Babylon” in Isaiah. Because God is “wroth” with the modern descendants of ancient Israel for their sins, He turns them over to this power.

Gerald Flurry wrote in Isaiah’s End-Time Vision: “Herbert Armstrong long prophesied, and we expect, the alliance between Europe and South America to grow extremely strong. The most significant factors that will cement this connection are religion and language: Roman Catholicism is the dominant religion of Latin America …. But it will not be a union of equals: The Latin American countries will become vassal states to Europe!”

Anyone who knows the bloody history of this empire knows this is terrifying news for the near future. The fact that less than half of Latin Americans favor democracy as the best form of government shows how easy it will be for this region to align itself with the authoritarian strongmen of the Holy Roman Empire.