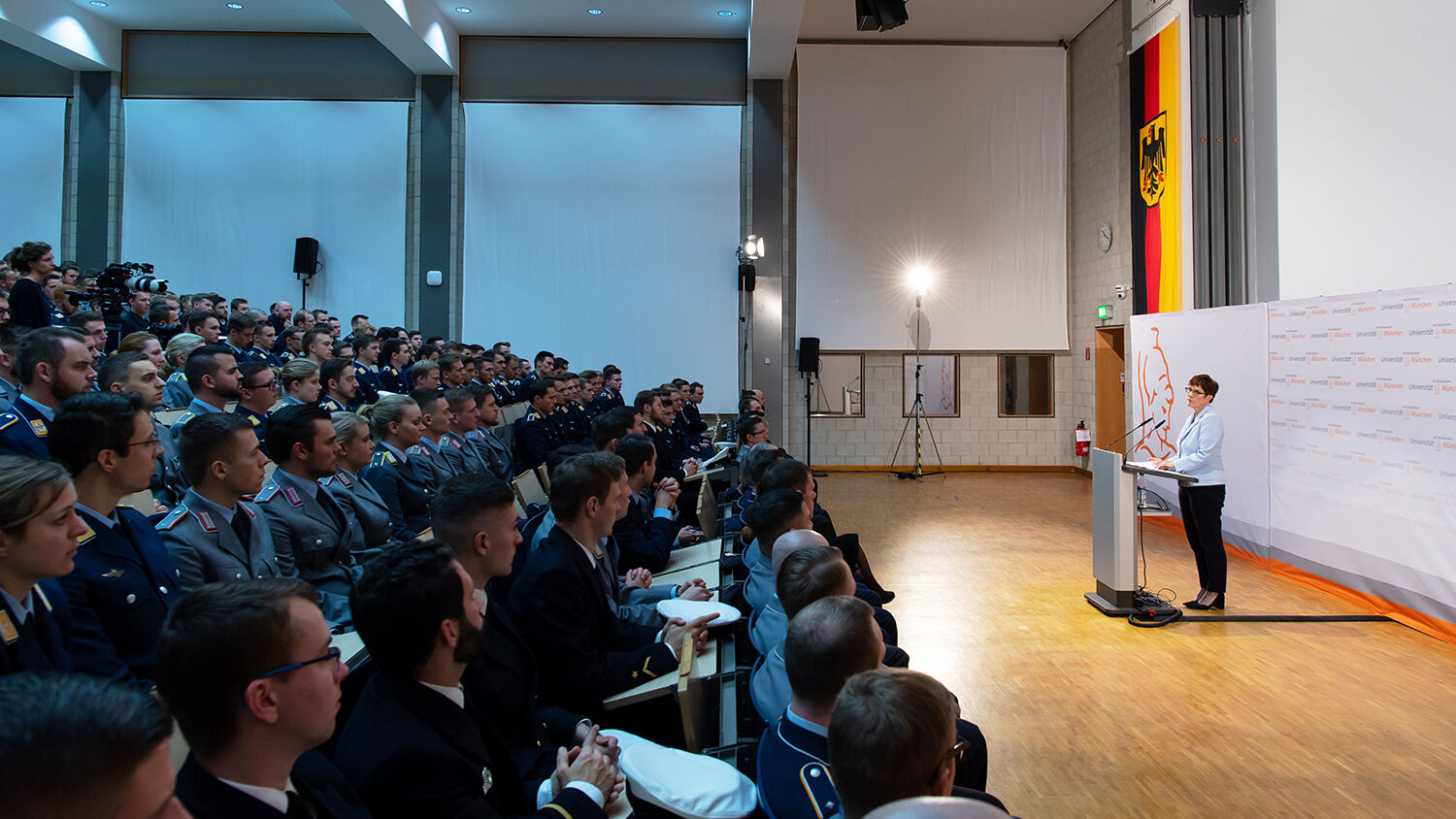 Preparing to back up its words with hard power, the Continent moves closer to a unified military.

Germany’s defense minister supported the establishment of a European security council in a November 7 speech given at Bundeswehr University in Munich. This would bring a unified European force to bear on strategic problems, making it a more credible influence on world affairs.

French President Emmanuel Macron stirred up controversy when he said the world is experiencing the “brain death of nato” and warned that Europe is on “the edge of a precipice” due to poor military cooperation. The primary response came from Germany.

German Foreign Minister Heiko Maas argued that Europe still needs the United States in order to defend itself. But Europe is also preparing to go it alone. Shortly after the comments, Maas laid out the idea for a European security council. Modeled after the American National Security Council, this would centralize Europe’s military planning and force EU nations to support a common foreign policy.

In short, it will dramatically increase Europe’s power.

Defense Minister Annegret Kramp-Karrenbauer supported the idea in her November 7 address to Bundeswehr University. “A country of our size, with our economic and technological power, our geostrategic position and global interests, cannot just stand on the sidelines and watch,” she said. Germany should “openly deal with the fact that we, like every other country in the world, have our own strategic interests.” She maintained that Germany needs an “ability to act” equal to its power and leading position in Europe.

Ursula von der Leyen, president-elect of the European Commission, made pointed remarks to the Konrad Adenauer Foundation in Berlin on November 8. Soft power alone, she said, is “no longer enough.” The Continent must “learn the language of power” and strengthen the military, because it is important to build “one’s own muscles.”

Then at the Paris Peace Forum held from November 12 to 13, von der Leyen explained further her vision for “a more outward-looking European Union, a Europe which collectively defends our collective values and common interests in the world.”

President-elect Ursula von der Leyen’s EU Commission is set to be a “geopolitical” one.

But what does this actually mean? Here’s what she had to say at #ParisPeaceForum2019 this morning: pic.twitter.com/WFTy5ezHaO

American politicians agree. They have been sending the same message to Europe: It is time for the EU to take up the role of world policeman. Germany must “buck its postwar policy traditions and begin to see itself for what it is: a normal power,” as Foreign Policy wrote in August.

In an interview with Der Spiegel published November 8, American historian and foreign-policy commentator Robert Kagan said that the time had come for Germany to “grow up.” However, he did warn that empowering Germany carries risk:

It is a gamble the U.S. is going to take.

Near the end of the interview, Kagan warned, “I think you really have to be an unwavering optimist to believe that Europe will stay stable and peaceful without the support of the United States. You can’t compare the EU of the late 1990s to the EU of today.”

European leaders know the world is rapidly changing. They face a vital strategic question on how to ensure survival. Russia is rearming, China is extending its reach, terrorism is raging in Africa and the Middle East, all while America draws down its forces abroad. Brussels is realizing that only the combined might of Europe will be enough to protect the Continent.

To this end, EU leaders signed up for 13 new military projects under the Permanent Structured Cooperation on Defense Agreement (pesco) on November 12. Projects include unmanned submarines, new warships and electronic warfare drones. This is a direct response to Russian rearmament. The Russians have already developed an underwater drone and are working on airborne drones capable of electronic warfare. The first pesco projects were rolled out in spring 2018, the same time Russian President Vladimir Putin unveiled his newest drones and hypersonic missiles.

pesco is large and ambitious, but it will not make Europe militarily independent overnight. However, it says to the world that Europe is on the path to becoming an overt, active superpower.

All this rhetoric may be easy to dismiss. After all, leaders have promised an EU army, shared foreign policy, and joint military projects for years, without compelling results. But now Europe is moving beyond mere technological cooperation. By calling for a European security council, von der Leyen is telling Europe to get behind centralized leadership.

For this to work, one nation has to emerge as the leader.

It is significant that most of the response to Macron’s comments came from Germany. Thirty years after the fall of the Berlin Wall, Germany is being told by its leaders and by foreign politicians to rearm, assert itself, and become a world power. George Friedman writes in his book Flashpoints, “In 1945, it was assumed that Germany was finished as a great power. It has reemerged as the leading, if not dominant, power of the European peninsula.” In 1989, the same assumption prevailed. Germany had been divided for decades. But while Germany and the West celebrated the fall of the Berlin Wall, one man was warning that the reunification of Germany would bring very different results from what most expected.

That man was Herbert W. Armstrong, founder of the Plain Truth magazine, predecessor to the Trumpet. He warned often that Germany would rise again.

“For more than 25 years, I have been telling the radio audience that there will rise in Europe a resurrection of the ancient Roman Empire!” he wrote in an August 1959 Plain Truth article.

Many would be surprised to learn that numerous Bible prophecies discuss Europe. Revelation 17 contains one such prophecy that is specifically about Europe in our day. Describing the ancient Holy Roman Empire, it reveals that this conquering power will rise seven times throughout history. The sixth time came and went with Hitler and Mussolini.

The seventh revival of European power is already visible.

Trumpet editor in chief Gerald Flurry wrote that “the European empire is about to become a lot more authoritative.” This is exactly the direction Heiko Maas, Ursula von der Leyen, Annegret Kramp-Karrenbauer and others are taking Germany.

The Bible predicts that a strong German leader will emerge. Daniel 8:23 describes him as a “king.” Mr. Flurry explains in A Strong German Leader Is Imminent that this man will “lead like a king.” He is prophesied to lead the world into the Great Tribulation, a time of unparalleled suffering.

At this time of uncertainty in Europe and the United States, there are sure answers. The Bible that predicts Europe’s rise also reveals that it will lead directly to the Second Coming of Jesus Christ. Only then will permanent peace come to this troubled world.

To read more about why you should pay attention to Europe’s rise as a superpower, read our free book The Holy Roman Empire in Prophecy.