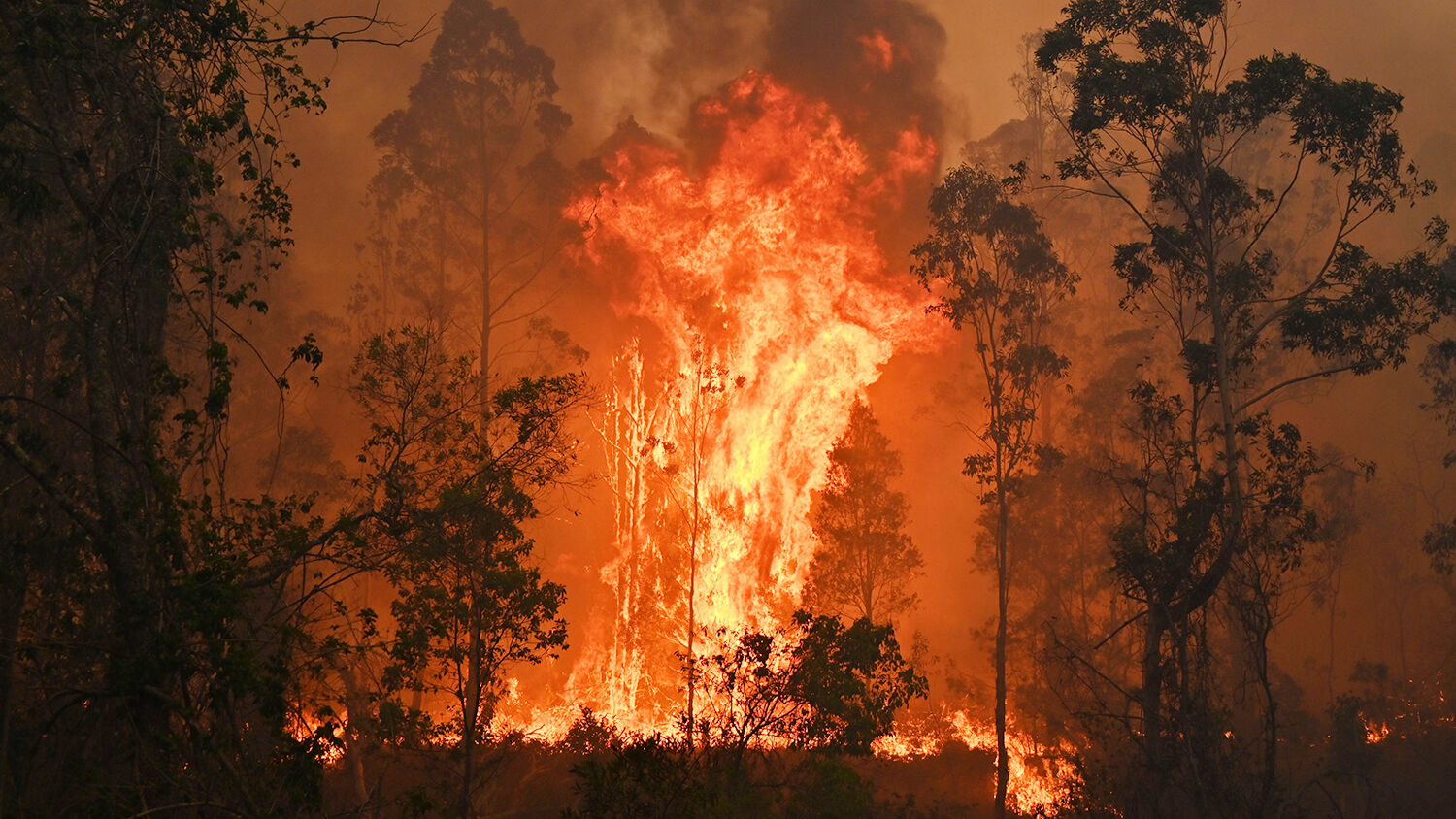 A fire rages in Bobin on November 9 as firefighters work to contain dozens of out-of-control blazes raging in the state of New South Wales.
PETER PARKS/AFP via Getty Images

Nightmare conditions look set to continue as the nation burns.

Blood red sun, choking smoke and ash raining from the sky: Apocalyptic scenes usually reserved for doomsday movies are the reality many Australians woke up to this morning. A state of emergency is in effect across the Australian state of New South Wales as bushfires rage out of control up and down the east coast.

High winds and low humidity have fanned the flames. The fire warning is at the highest possible level: catastrophic. It is the first time the state capital of Sydney has reached this level.

More than 600 schools have closed while 25 fires burn out of control across the state. Some 3,000 firefighters have been deployed in an effort to stem the destruction. The army is on standby to assist.

The death toll stands at three, and more than 150 homes are engulfed in the flames. For many, the apocalyptic scenes are a reminder of 2009’s Black Saturday. On that dry summer day, fires sprang up across Victoria, killing 173 people. The difference today is that the infernos are already lit, and the fire season is far from finished. We haven’t even reached summer.

“We could be looking at this week, after week, after week until we get rain,” said Rural Fire Service spokesman Ben Shepherd. And that precipitation is unlikely. The entire country—bar a few spots in Tasmania—went without rain on Monday. It was a new record in Australian history. This follows 12 months of some of the driest weather on the record books.

Many are shocked by the extreme conditions. Rural Fire Service Deputy Commissioner Rob Rogers summed it up to one broadcaster: “I’ve got to tell you, I’ve been in this industry for 40 years and I have not seen a scenario like this before; I really haven’t.”

To grasp the magnitude of the fires threatening Sydney, the smoke now reaches New Zealand, some 2,547 miles away. The 6 million people in Sydney’s metro area have never experienced this before.

There is no denying that the fires are getting worse. This year 850,000 hectares have burned across New South Wales. That is three times as much as last season. Firefighters and emergency service personnel keep using the term “unprecedented” because it keeps getting worse!

As conditions deteriorate, the calls for action continue to mount. The political class is battling over whether it is appropriate to discuss climate change before the fires are out. Deputy Prime Minister Michael McCormack said, “They don’t need the ravings of some pure, enlightened and woke capital city greenies at this time, when they’re trying to save their homes, when in fact they’re going out in many cases saving other people’s homes and leaving their own homes at risk.”

True, the valiant farmers, firefighters and volunteers risking their lives don’t need that discussion. But there is a message Australia desperately needs to hear. And it has nothing to do with climate change.

The message comes in the form of Deuteronomy 28—one of the blessings and curses chapters of the Bible.

In the first part of the chapter, God promises blessings to Israel if it obeys Him. In the latter part, He promises curses for disobedience. These promises were also made to Israel’s modern-day descendants—the people primarily found in the United States, Israel and the British Empire. “Neither with you only do I make this covenant and this oath; But with him that standeth here with us this day before the Lord our God, and also with him that is not here with us this day” (Deuteronomy 29:14-15). For more on the descendants of Israel, request our free book The United States and Britain in Prophecy, by Herbert W. Armstrong.

Notice some of the curses that God promises would come on nations that chose to reject His commandments: “And thy heaven that is over thy head shall be brass, and the earth that is under thee shall be iron. The Lord shall make the rain of thy land powder and dust [some Bible translations say ‘ashes’]: from heaven shall it come down upon thee, until thou be destroyed” (Deuteronomy 28:23-24).

Doesn’t this perfectly describe the Australia of today? Surely our drought-stricken farmers could look at such descriptions and see it for themselves in the baked and withered ground on which their starved cattle graze.

If only people would repent and turn to the God who loves them and wants what is best for them! There are so many blessings—spiritual and material that God wants to give mankind. “Sing unto the Lord with thanksgiving; sing praise upon the harp unto our God: Who covereth the heaven with clouds, who prepareth rain for the earth, who maketh grass to grow upon the mountains. … The Lord taketh pleasure in them that fear him, in those that hope in his mercy” (Psalm 147:7-8, 11). To fear is to revere. How few people revere God in society today!

Look at the response to these fires. Experts point to delayed monsoons in India and the insidious overarching effects of “climate change.” Prime Minister Scott Morrison sent his “thoughts and prayers” to those afflicted, but where is the real reverence for God? Where is the repentance? In the last few years Australia has cast itself wholeheartedly into immorality. You see it in the media. You see it in entertainment. You see it in politics. You see it in society. We have forgotten the God who gifted to us the lands of “golden soil and wealth for toil.”

As Trumpet editor in chief Gerald Flurry wrote in the August 2017 Trumpet issue:

The terrorism and plagues in this country were prophesied by God! And they are going to get far worse—because of our egregious spiritual sins. But Satan wants you to think that all the problems are a result of our emitting too much carbon dioxide!

Australia is careening down a path that leads to far worse things than bushfires. The Bible warns that events will only get worse—much worse. God is trying to show us where our sins are taking us! What loving parent wouldn’t do anything to wake their children up to such cataclysm?

Individually, there is still time to turn back! You can respond to God’s correction today and be saved from the downward trajectory of our nations. We need to understand why these curses are befalling us and what we need to do about it. Our free booklet Why ‘Natural’ Disasters? will help you make sense of our deteriorating world, and why God is allowing these things to happen.

Nobody likes to discuss curses from God or dark days ahead. But God offers mind-boggling blessings to those who do and who respond. The responsibility is ours.