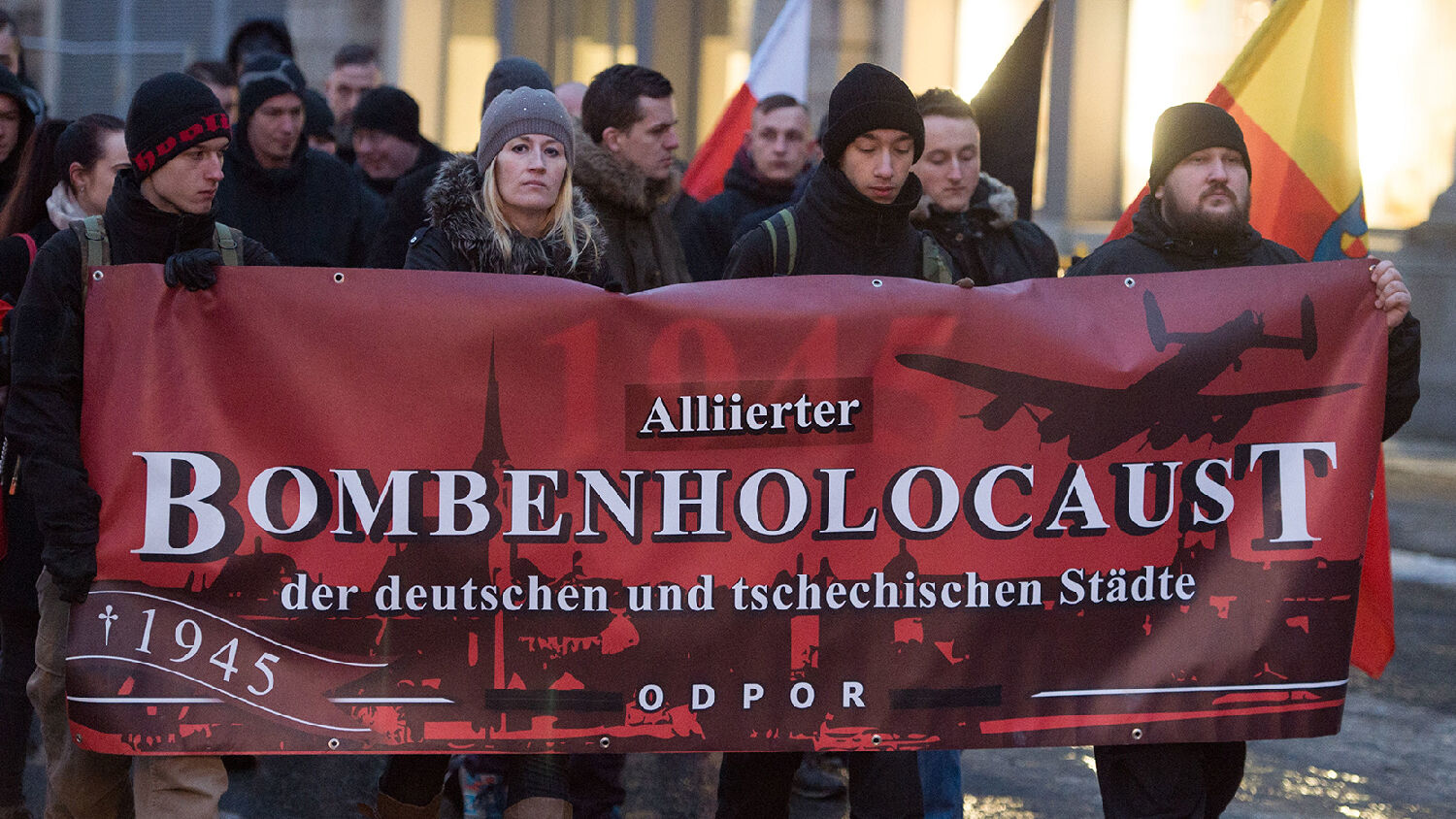 Right-wing extremists hold up a banner during a so-called funeral march in Dresden, Germany.
Sebastian Kahnert/picture alliance via Getty Images

Neo-Nazi views are perilously close to entering the German mainstream.

Dresden’s city council declared a “Nazi emergency” on November 2. The city, located in the Eastern German state of Saxony, passed a motion condemning neo-Nazi demonstrations and encouraging the council to seek federal funding for anti-Nazi education programs, as well as a ban on future rallies by the far right.

His motion was approved by 10 votes, with 39 for and 29 against. The greatest opposition to the motion came from members of the Christian Democratic Union and Alternative für Deutschland (AfD). “This city has a problem with Nazis, and we need to do something about it,” said Aschenbach. “Politicians must finally be able to stand up and say, ‘No, this is unacceptable.’”

The rhetoric about a “state of emergency” is somewhat of an exaggeration and does not fully reflect reality. Aschenbach’s party is left-wing and openly satirical. The left can easily seize upon incidents of far-right extremism to tarnish the reputation of its rivals on the right. The Christian Democratic Union called the motion a provocation, an “error” and an exercise in “symbolic politics.” A state of emergency implies the collapse of public law and order, or a serious threat to safety.

So is there any truth to what Aschenbach said?

Even though the rhetoric may be exaggerated, Dresden’s far right does pose a real danger.

During World War ii, Dresden was firebombed by British and American heavy bombers in a campaign that destroyed most of the city center and killed 25,000 to 35,000 people. In the 1990s, the far right enshrined Dresden as a symbol of German suffering and began holding rallies there.

In 2014, Dresden was home to the pegida (Patriotic Europeans Against the Islamization of the West) movement. That was the same year the right-wing AfD was founded. Five years on, the AfD has reached second place in state elections, coming in only 5 percent behind Merkel’s cdu. It has likewise triumphed in Brandenburg and Thuringia.

Since 2014, Dresden has seen frequent marches and rallies by right-wing organizations, along with investigations of right-wing terror groups. These groups are also active online. Green party politician Cem Özdemir revealed this past weekend that far-right supporters e-mailed him death threats. Another member of the Green Party received a similar message. Both were reportedly sent by the German branch of an American neo-Nazi group.

These events all fit in with a concerning trend: Germans are fleeing the established parties in favor of fringe parties like the AfD, the Greens and various far-left options. Aschenbach’s own party points to this. Founded as a satirical far-left party, it has gained popularity only recently.

What do these seemingly diverse groups have in common? Their message is about bringing change. They provide a way for frustrated voters to express their grievances.

What is happening in Dresden is a picture of the wider political chaos in Germany and has consequences at higher levels. Events in Saxony play an important role here. Polish magazine Political Critique said in May that “a loose cannon in the Saxonian government would potentially destabilize the state itself, with consequences even at the international level.”

Though currently not unified, the anger of Germany’s political extremes will soon be harnessed to devastating effect. It happened in the lead-up to World War ii. And it will happen again.

Trumpet editor in chief Gerald Flurry warns in his booklet Daniel Unlocks Revelation, “Politics in Europe are going to shift dramatically to the right.” This is happening before our eyes. He wrote that before the migrant crisis began—how could he have known?

His forecast is based on a Bible prophecy that says a strong German leader will take power in Europe.

“And in the latter time of their kingdom, when the transgressors are come to the full, a king of fierce countenance, and understanding dark sentences, shall stand up” (Daniel 8:23). The Prophet Daniel was writing for our time today. In this prophecy he is talking about a man that will come on the scene and take control of not only Germany, but eventually all of Europe! Mr. Flurry writes in A Strong German Leader Is Imminent, “When the Bible talks about a king, in most cases it’s saying that this is not a democratic government.” This strongman will transform Germany and Europe.

It seems impossible today that such a leader could find support in democratic Germany. But it is not as far away as one might think. Many Germans are frustrated with the status quo under Chancellor Angela Merkel. This is why the AfD and Left Party are scoring higher than ever in state elections, and in some cases, accounting for more than half of all votes.

The Bible warns that Europe will soon have a strongman. This should be a warning for Germany—and the entire world.

The entrance of this fierce “king” will bring a stronger Europe. Mr. Flurry writes, “Daniel 11:21 prophesies that this strong leader will come into power ‘by flatteries’—probably not by votes, but through a coalition government of some kind” (ibid).

Take a look at Germany’s unstable government coalition. Germany, along with all of Europe, is waiting for a strong leader. It won’t have to wait long.

History shows that a revived imperial Europe is dangerous. Throughout history, the Holy Roman Empire has been resurrected six times. We are on the verge of witnessing the seventh and final resurrection of that deadly empire. Countless Bible prophecies warn that, once resurrected, this revived Holy Roman Empire will conquer the U.S. and Britain. (For more detailed information, request The Holy Roman Empire in Prophecy.)

To understand why German political instability is an overlooked but real danger to the entire world, order your free copy of A Strong German Leader Is Imminent.