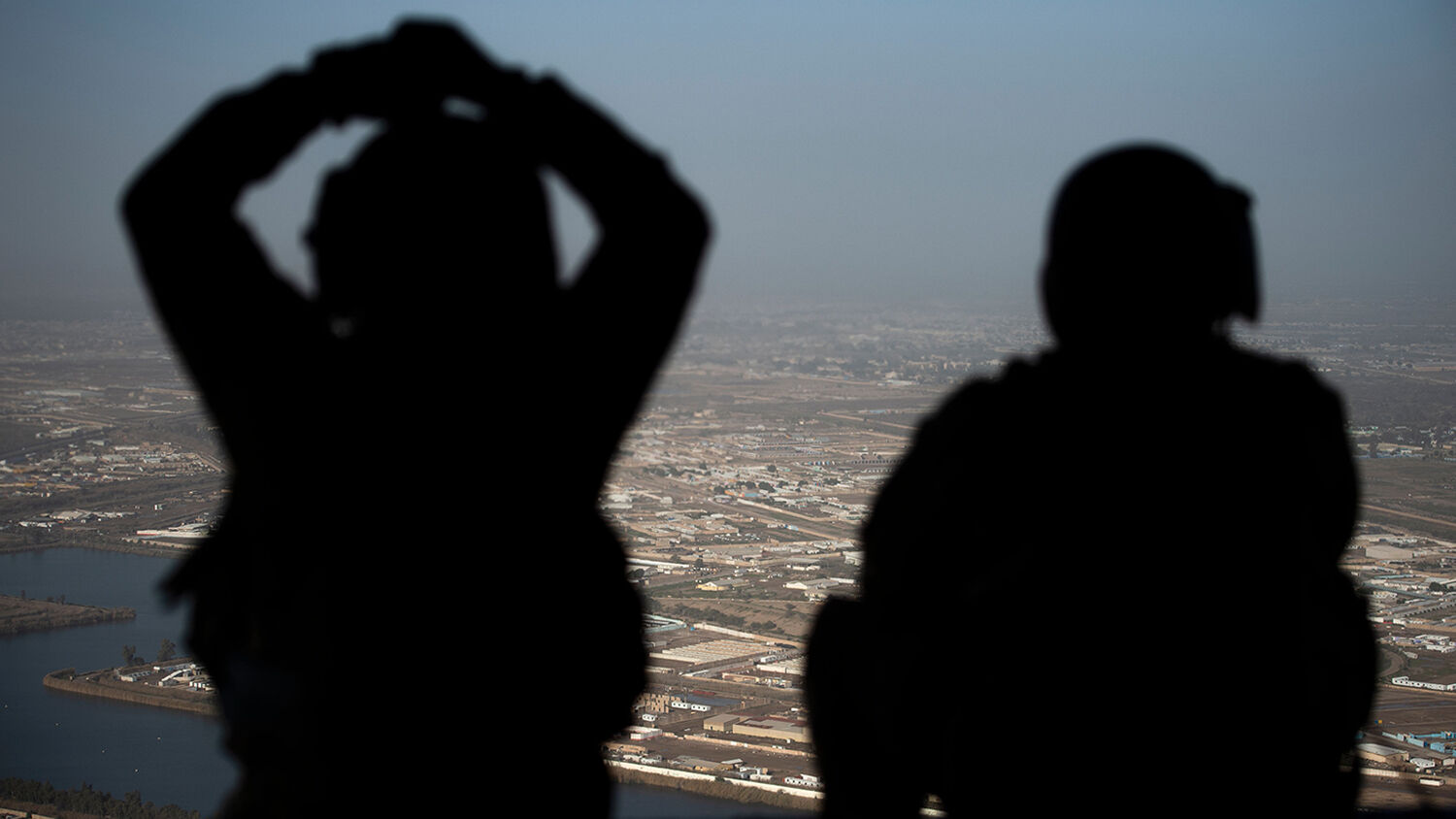 U.S. Army helicopter crew members look out of their Chinook helicopter as they fly from the U.S. Embassy to Baghdad International Airport on January 9, following the helicopter of U.S. Secretary of State Mike Pompeo.
ANDREW CABALLERO-REYNOLDS/AFP/Getty Images

The world’s strongest military is not as strong as you might think.

The Heritage Foundation released its annual review of the United States military on October 30. It rated the military’s superiority as “marginal” and warned that, in the event of a war, all branches of the military would be stretched too thinly on multiple fronts. In an unstable world, this is a warning everyone should pay attention to, because it provides a glimpse into the future.

The “marginal” rating for America’s four combat branches (the Army, Air Force, Navy and Marine Corps) means they have nearly lost their overwhelming advantages over potential adversaries. Though still strong, they are only marginally better, and that advantage would disappear in a two-front war.

“The current U.S. military force is likely capable of meeting the demands of a single major regional conflict,” stated the Heritage Foundation. However, “it would be very hard-pressed to do more and certainly would be ill-equipped to handle two nearly simultaneous major regional contingencies.”

The cost of a weak military is extremely high. “The U.S. risks seeing its interests increasingly challenged, and the world order it has led since World War ii undone,” it wrote.

Around the world, that order is under attack.

“As currently postured,” warned the report, “the U.S. military is only marginally able to meet the demands of defending America’s vital national interests.” This is dangerous in today’s world of hypersonic missiles, cyberwarfare and increasingly stealthy submarines. Multiple threats can develop around the world all at once. But as the Heritage Foundation noted, America’s military would have a hard time handling more than one major regional conflict.

The Heritage Foundation summarized threat levels to the U.S. as “high,” one level below the maximum rating of “extreme.” It identified Russia, China, Iran and Middle East terrorist groups as the most aggressively anti-American powers.

The Navy, Army and Marines were rated as weak in the field of capacity. This means that although they have the training and technology to win, they may not have enough ships, soldiers and planes to accomplish an objective. Or these resources may be difficult to relocate and unable to arrive in time to win a regional conflict.

All forces, except the Army, were rated as only marginally ready to mobilize for war. This arises mainly from maintenance backlogs and shortages in spare parts.

The Heritage Foundation recommended notable expansion in all branches of the service. The Army has 35 brigade combat teams but needs 50. The Navy lacks 110 ships, the Air Force lacks 249 planes, and the Marines need 12 more battalions—all to reach the minimum levels of operational preparedness.

But the necessary modernization and purchasing depend on another factor: the defense budget.

The report cited “worrisome trends in force readiness, declining strength in key areas like trained pilots, and continued uncertainty across the defense budget” as reasons for the low ratings. It blamed “many years of underinvestment, poor execution of modernization programs, and the negative effects of budget sequestration (cuts in funding) on readiness and capacity.”

Also singled out for criticism was America’s nuclear capability. Though the U.S. keeps one of the world’s largest stockpiles of warheads, the report criticized reliance on Cold War-era missiles and a lack of modernization. These, it warned, erode the force’s credibility.

The defense budget has limited the number of submarines carrying nuclear weapons and reduced their payloads. “While the United States preserves these capabilities, increasing capacity would be not only costly, but also difficult and time-consuming in practice,” stated the report.

All eyes are on President Donald Trump’s administration to see what will happen to the American military.

Although the president may temporarily boost spending and prioritize defense, this will not last. In the end, the U.S. military will go the way an increasing number of people fear. It will not be able to defend national interests, or even the homeland.

This sounds like an extreme prediction for the world’s largest and most advanced military. But it is not without foundation.

The Trumpet views the current state of the military in the context of Bible prophecy. These prophecies are relevant for today. The U.S. is descended from the ancient nation of Israel (request your free copy of The United States and Britain in Prophecy for a detailed explanation). The prophecies of the Bible are about Israel—the United States, along with Britain and the Commonwealth nations—and they predict that these nations will fall hard before they rise again.

One prophecy in Micah describes the transition the world is witnessing right now: from America as world policeman to American isolationism and, eventually, catastrophic fall.

Micah 5:7-9 describe a time when the modern-day nation of Israel is at the height of its power. Verses 10 through 14 show that God will take away the nation’s military might because of rebellion against His laws. Chariots and horses are biblical symbols for modern weapons of war.

Leviticus 26 and Deuteronomy 28 spell out the same message: blessings for obedience, and curses, such as declining military strength, for disobedience to God’s laws.

The Bible has a lot to say about the cause for America’s declining military supremacy. Budget shortfalls, bad maintenance and aging equipment are the effects, not the cause, of American military decline. The real cause is spiritual.

Are you concerned about the future of this once-mighty nation? About the impact its decline is having on freedom all over the world? Do you want to know what the future holds, with a certainty that no military expert can provide? If so, read our Trends article “America Has Won Its Last War.”