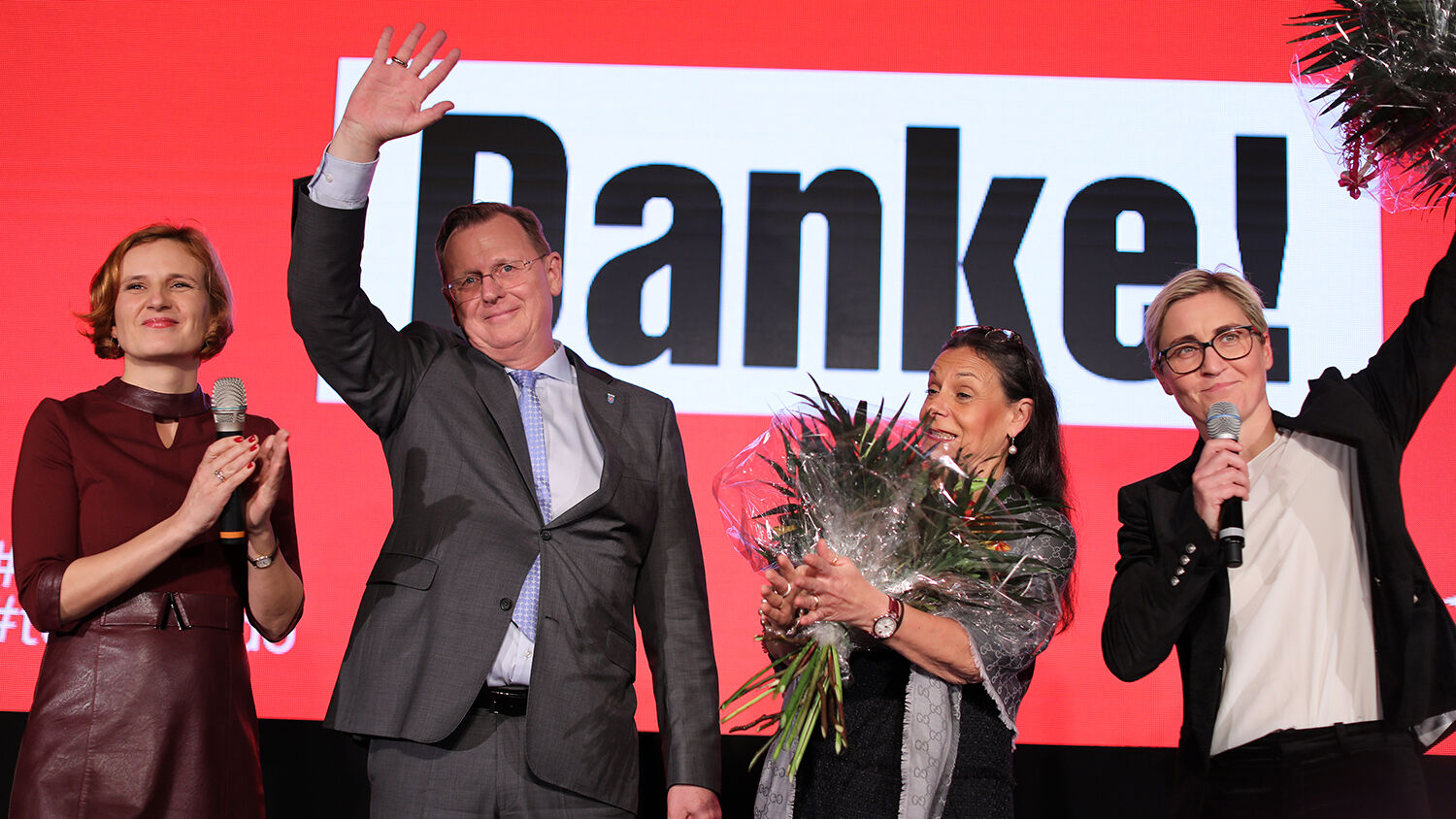 Historic gains for the far right and far left signal the approaching end of Merkel’s coalition.

Parties on the far right and far left gained more than half of all votes in elections held in the German state of Thuringia on October 27. Chancellor Angela Merkel’s party faced major setbacks, as did its coalition partner. The election result is another damaging blow to Germany’s shaky coalition and could lead to a major change in German politics.

Die Linke (the Left) party grew slightly to become Thuringia’s most popular party, with 31 percent of the vote. Second was Alternative für Deutschland (AfD), with 23.4 percent. Merkel’s Christian Democratic Union (cdu) came third, with 21.8 percent. This is a dramatic fall from 2014 elections, when it placed first.

Together, the far right and far left accounted for 54.4 percent of the vote. The Social Democrats (spd), coalition partner of Merkel’s battered cdu, dropped to 8.2 percent, a loss of more than 4 percent compared to 2014.

Thuringia is more divided now than it was in 2014. Back then, the cdu received 33.5 percent, and the spd took 12.4, meaning 45.9 percent of voters supported the mainstream parties. This time, the only party that remained relatively unchanged was the Left, keeping its strong support. Support for the AfD more than doubled, to the detriment of the establishment parties.

Party leader, Björn Höcke, sees the election as a clear no to a “paralysed party democracy”.#Thuringia#ltwth19 pic.twitter.com/FHhd2qfCKm

This is also the first time the Left has been the strongest party in any German state.

This shows a huge level of dissatisfaction in Germany. The Left is the successor of East Germany’s Communist party. It wants to end big businesses and pull Germany out of nato. Until recent years, major parties wouldn’t work with it.

Meanwhile, the AfD consistently downplays the Holocaust. Its leaders have said Germans should be proud of the achievements of their soldiers in the two world wars.

Between the Left and AfD, these extreme parties have the support of more than 50 percent of Thuringia. The people apparently want radical changes.

Jews are particularly concerned with the AfD’s success.

“The fact that a party like the so-called Alternative for Germany can experience such success in a state election shows that our whole political system is coming apart at the seams,” said Charlotte Knobloch, former president of the Central Council of Jews in Germany. “Anywhere where a party like that celebrates success, is a place with real problems.”

She added: “Many of the electorate have used their votes to support a party who have for years downplayed the horrors of the Nazi era, who are openly nationalistic and have spread messages of hate against minorities, including the Jewish community, and who have prepared the breeding ground for exclusion and extreme right-wing violence.”

Christoph Heubner, vice president of the International Auschwitz Committee, sounded a similar warning, saying, “For survivors of German concentration camps, this massive increase in votes for the AfD in Thuringia is another menacing signal that right-wing extremist attitudes and tendencies are consolidating in Germany.”

As well as being an alarming signal, the vote shows that Germany is ready for new leadership.

Thuringia’s regional parliament is in turmoil. The previous coalition, consisting of the Left, spd and Green Party, now lacks enough seats to form a government.

Another option is to bring in the Free Democrats (fdp), a pro-business party. But fdp leader Christian Lindner refuses to work with the Left and the AfD. He criticizes them for wanting to “change the economic and societal order in Germany,” reported Deutsche Welle.

The only practical option remaining is a partnership with Merkel’s cdu. However, the Left will have difficulty accepting this, since the cdu is viewed as conservative. The cdu has also become unpopular. It dropped by almost 12 percentage points this year compared to 2014. Allying with it could be costly to the Left’s popularity.

Any other combination would involve alliances between parties diametrically opposed to one another. Whatever happens, this election has thrown Thuringia’s politics into chaos and weakened Merkel’s grip on power at the federal level.

In 2014, such a situation was unimaginable. The cdu was leading, and the Left remained the second-most popular party, followed by the spd. The AfD, then a new addition to German politics, was in fourth place. Today, Thuringia has rejected the mainstream. Nowhere else in Germany is the Left more popular. The AfD has more than doubled its support. The state is divided.

“The last time we saw something of this kind in Germany was in the Weimar Republic where political life was polarized between the Communists and the National Socialists,” political scientist and commentator Werner Patzelt told the Local. “This is quite uncommon.”

Yet it is becoming a lot more common in these final days of Merkel’s coalition.

“The AfD in Thuringia is the most radical part of the AfD throughout Germany,” said Patzelt. “So many would have expected that all the arguments claiming this is a party of racists, nationalists and led by a fascist would prevent people from voting for the AfD. But this did not do the trick. This is one more indicator of how much political power is behind the AfD.”

Why did Thuringia reject the mainstream and vote overwhelmingly for radical parties? Why is this trend happening more often, especially with the AfD? Where will it take Germany?

Many Germans are tired of Merkel’s weak coalition. Discontent is growing. More are desiring change. And they will soon get it.

The Trumpet has warned for many years that a weak German government could provide ideal conditions for a strong leader to seize control of the EU. He will take advantage of division and crisis to gain power—and will not enter by democratic process.

Trumpet editor in chief Gerald Flurry said in a July 2010 Key of David program that this strong leader could “take advantage of a weak coalition” to get into power.

In his free booklet Daniel Unlocks Revelation, Mr. Flurry writes, “We need to watch the European Union for a man stepping in and seizing control of that entity through flatteries. He is going to hijack the EU …. Politics in Europe are going to shift dramatically to the right.”

How could he make these bold claims before Germany’s refugee crisis had even begun? This forecast comes straight from the pages of the Bible.

Daniel 11:21 says this strong leader “shall come in peaceably, and obtain the kingdom by flatteries.” Daniel 8:23 describes him as a “king of fierce countenance.” Mr. Flurry explains this fully in A Strong German Leader Is Imminent: “This soon-coming ruler could literally be called a king. Even if he is not, the Bible gives him that label. When the Bible talks about a king, in most cases it’s saying that this is not a democratic government. Even if he doesn’t have that title, he is going to lead like a king.”

Watch the European Union and watch Germany. As election upsets weaken Merkel’s coalition, this prophecy of a strong leader in Europe comes closer to being fulfilled. You need to pay attention to this even if you don’t live in Europe. To understand how the fulfillment of this prophecy will change not only Germany and Europe, but the entire world, order your free copy of A Strong German Leader Is Imminent.