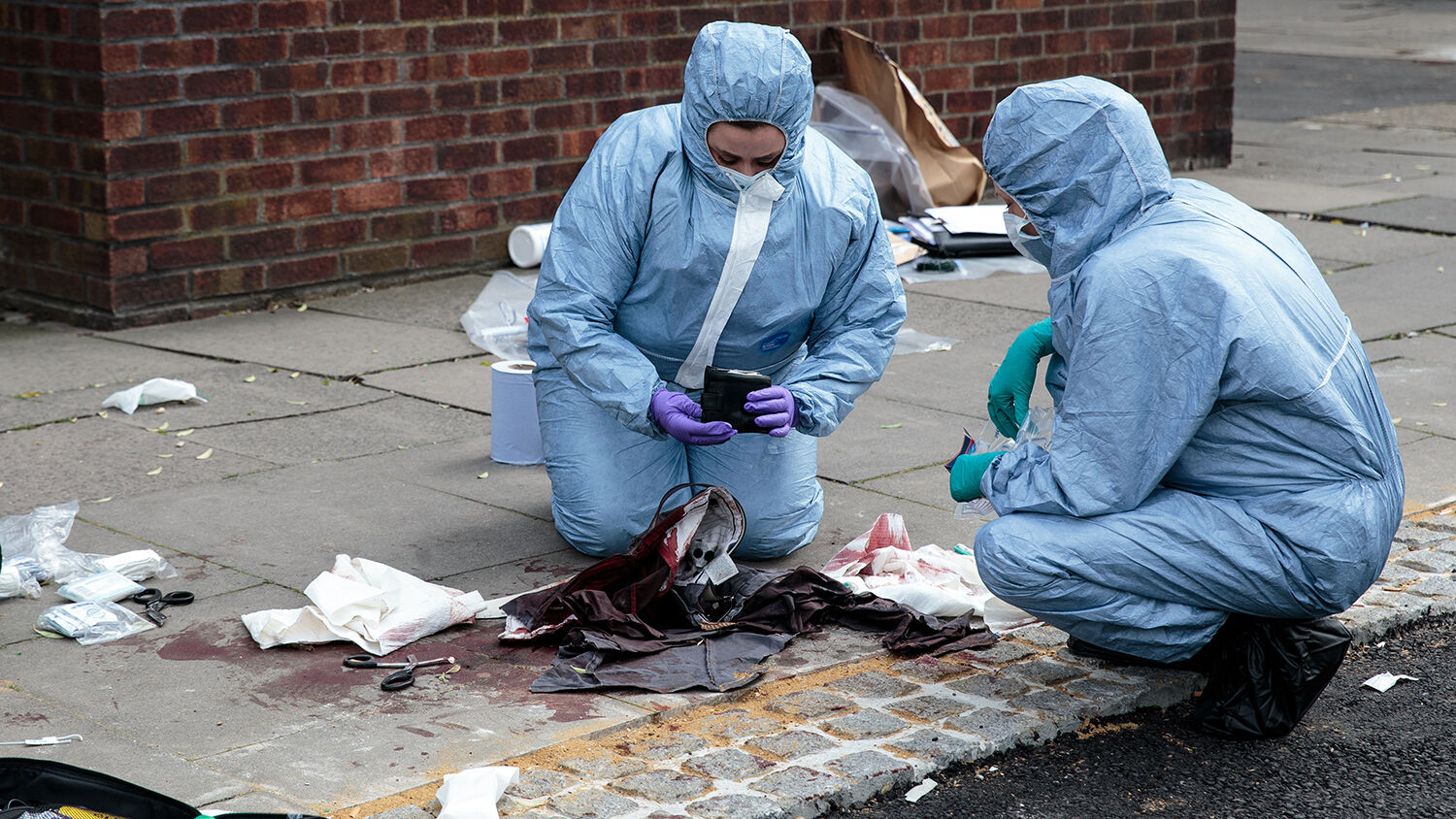 A forensics team works at the scene of a stabbing in London, England, on March 31.
Jack Taylor/Getty Images

Murder rates in London, England, are set to surpass last year’s high after two more young men were stabbed to death in public places on September 24. The total number of murders in London this year now stands at 114. Compared to the rest of the country, London suffers from epidemic levels of knife murders. Officials wrestling for control of the streets are under more pressure than ever to find a solution.

But nobody has come close to solving this crisis.

The first murder on September 24 occurred on the platform of a tube station right before the busiest hours of the afternoon, when the victim, 20-year-old Tashan Daniel, was on his way to a soccer match. Two hours later, 22-year-old Osvaldo Carvalho was stabbed to death in a residential area of London’s Ealing district after he tried to flee from a street fight.

These murders raise questions. Tashan Daniel did not know his murderers. According to witnesses, the fatal fight broke out after the men accused him of looking at them in a weird way. If this serves as an excuse to commit murder, how can anyone feel safe?

The Ealing borough where Carvalho died is safer than half of London’s districts. But no place in London is safe. London accounts for 36 percent of all knife crimes in England, and every borough has seen a rise in crime from 2018 to 2019, in some places as high as 35 percent.

Rising violence is putting greater pressure on police and politicians to deal with the problem. Some recommend lengthening jail terms. Some advocate greater stop-and-search powers for police. Others believe the answers lie in social programs and money. Schools are purchasing equipment to detect knives being smuggled inside.

London’s knife crime has been a major issue for years. To many, it is a distant problem. But in reality, it is a life-and-death threat on those in London each day. Man’s solutions may help a little to stem the violence. But there is a better way to bring security to London’s streets. It’s simpler and cheaper than any solution yet proposed. It involves law—not mankind’s legal system, but the practical, clear law of God.

Many know that God forbids murder. But almost nobody knows that God is a family. He created the institution of human family. He created roles within that family, which are complimentary and must work together. Research shows that fatherless homes are prime producers of the angry, restless young men who are fueling knife crimes.

Mankind has rejected God’s family structure, and the consequences are being written in human blood in one of the world’s most prosperous and prominent cities. But there is a solution. To understand the reason for this paradox and learn how to free yourself from the suffering brought by lawlessness, request your free copy of The God Family Vision, by Trumpet editor in chief Gerald Flurry.