Millions are angry over attempts to oust the president from office. 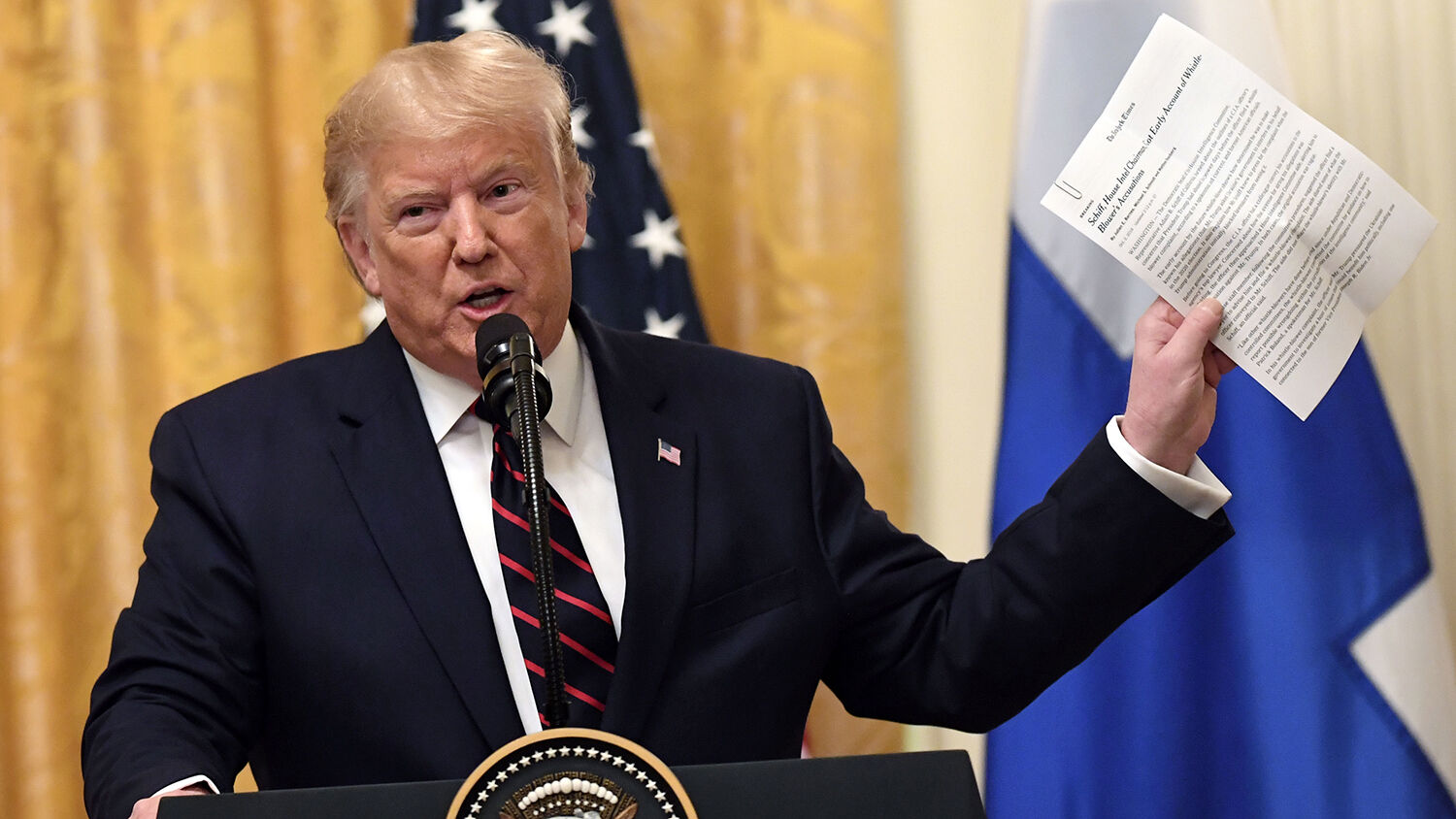 Millions are angry over attempts to oust the president from office.

Attempts to remove United States President Donald Trump from office are tearing America apart. The president is closer than ever to being impeached, and prominent figures are openly discussing the possibility of “civil war.” On September 24, Speaker of the House of Representatives Nancy Pelosi announced that she was initiating a formal impeachment inquiry against President Trump. She accused the president of violating the Constitution, betraying his oath of office, and endangering national security by enlisting a foreign power to tarnish the reputation of a rival.

This impeachment inquiry is set to become contentious.

The impeachment call was prompted after a whistleblower accused President Trump of pressuring the president of Ukraine to investigate Hunter Biden’s past work for a Ukrainian energy company. Hunter Biden is the son of democratic presidential candidate Joe Biden. In 2018, Joe Biden bragged that when he was vice president he threatened to withhold $1 billion in U.S. loans from Ukraine if it did not agree to fire the prosecutor investigating his son’s business dealings.

The New York Times alleges that this whistleblower is a Central Intelligence Agency officer still working for the U.S. government.

In a bid to clear his name, President Trump released the official transcript of his July 25 phone call with the Ukrainian president. It showed that the whistleblower’s accusations were gross exaggerations.

The transcript reveals that Mr. Trump did not threaten the Ukrainian president. He asked him to investigate the people who were involved in the 2016 election meddling case. “I would like you to do us a favor though because our country has been through a lot and Ukraine knows a lot about it,” said Trump. “I would like you to find out what happened with this whole situation with Ukraine …. I would like to have the attorney general call you or your people, and I would like you to get to the bottom of it. As you said yesterday, that whole nonsense ended with a very poor performance by a man named Robert Mueller, an incompetent performance, but they say a lot of it started with Ukraine.”

Attorney General William Barr has been traveling the world meeting with foreign intelligence officials about the Obama administration’s illegal surveillance of the Trump presidential campaign in 2016. It seems Democratic Party officials are desperate to avoid being exposed, and so are trying to prove that President Trump also illegally partnered with a foreign government to investigate an American citizen.

Responding to a question about evangelical Christians’ response to impeachment moves, Robert Jeffress, pastor of the First Baptist Dallas, told Fox & Friends on September 29 that it could plunge the nation into civil war.

“Look, I don’t pretend to speak for all evangelicals, but this week, I have been traveling the country and I’ve literally spoken to thousands and thousands of evangelical Christians,” he said. “I have never seen them more angry over any issue than this attempt to illegitimately remove this president from office, overturn the 2016 election, and negate the votes of millions of evangelicals in the process. And they know that the only impeachable offense President Trump has committed was beating Hillary Clinton in 2016. That’s the unpardonable sin for which the Democrats will never forgive him. And I do want to make this prediction this morning: If the Democrats are successful in removing the president from office, I’m afraid it will cause a civil war-like fracture in this nation from which this country will never heal.”

President Trump tweeted Jeffress’s warning on September 29. Even before the current impeachment inquiry, a poll from Rasmussen Reports found that 31 percent of probable U.S. voters surveyed thought “it’s likely that the United States will experience a second civil war sometime in the next five years.”

Currently, 225 of the 435 members of the House of Representatives support the impeachment inquiry against President Trump. Since it only takes 218 members of the House of Representatives to impeach a president, Mr. Trump could realistically be impeached by the end of the year if Democrats stand united. He would not have to leave office, however, unless 67 Senators formally convict him of a crime (which is highly unlikely since Republican have 53 seats in the 100-seat Senate).

If Mr. Trump is impeached by the House and acquitted by the Senate, he may become the first impeached president in U.S. history to run for (and potentially win) reelection.

Whatever the case, the 2020 U.S. presidential election is set to be extremely divisive. Bible prophecy foretells that this division will soon escalate into unprecedented bloodshed unless the nation as a whole turns to God in repentance!

In The United States and Britain in Prophecy, the late Herbert W. Armstrong explained how modern Britain and America descended from ancient Israel. The Bible records that in the time just before Jesus Christ’s return, Israel’s sins will lead to government corruption and violent revolution.

While millions of Americans may now be waking up to the threat this sprawling network of “deep state” departments presents to the nation, their populist revolution does not address the root causes behind the crisis.

If the Democrats are successful in removing the president from office, I’m afraid it will cause a civil war-like fracture in this nation from which this country will never heal.
Robert Jeffress, pastor of First Baptist Dallas

Corruption and bitter division in America today are leading to a conflict so devastating that the entire country will be laid desolate and its cities will burn with fire. These serious problems are not caused by one man or a group of government officials. Ultimately, they are caused by the sins of the American people as a whole. Only the repentance of the people can prevent the sickness in America’s government from escalating into full-scale revolution and war.

“Many Americans are troubled by the divisions and hatreds being expressed right now,” wrote Trumpet editor in chief Gerald Flurry in January 2017. “But they need to be a lot more concerned than they are! The problems are going to get worse and worse until people get the message, and they learn why these disasters are happening! Donald Trump’s win is a prophetic sign of impending civil war and anarchy, followed by America’s worst military defeat ever! But don’t blame the politicians or the race-baiters or the professional rioters. This situation exists in America only because of the sins of the nation—of all Americans! We can no longer ignore what we have reaped by giving ourselves over to sin. This is a reckoning!”

All Americans must come to realize that only Jesus Christ can solve the serious problems in the U.S. government. Only then will God establish His government and replace the government in the United States and the governments in all nations. God’s government will not be a democratic republic or an authoritarian technocracy. It will be a constitutional theocracy, with the law of God as the constitution and Christ the reigning King of kings.

For more information about what the Bible says about civil war in America, read “America’s Coming Civil War,” by Gerald Flurry.