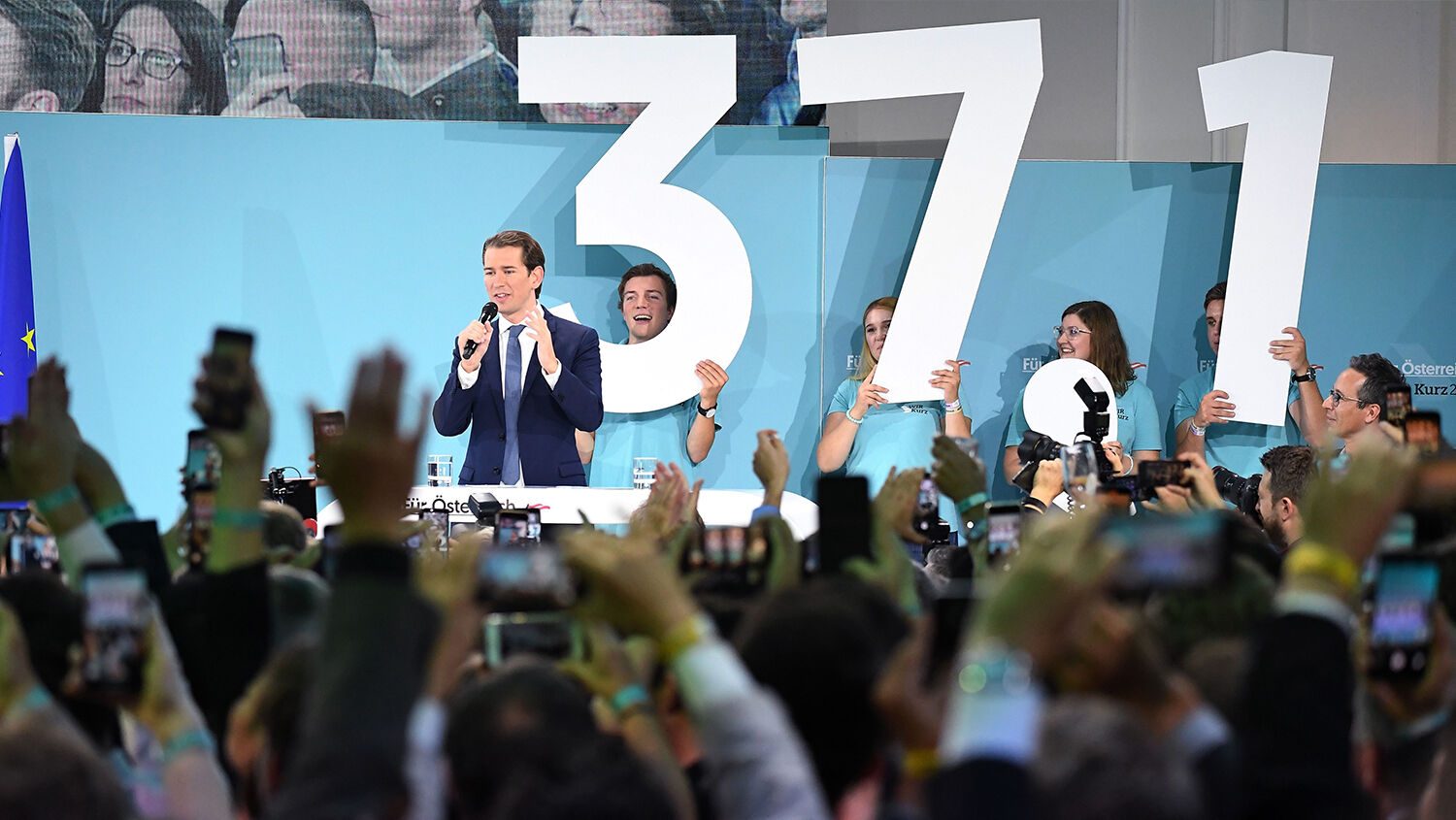 Sebastian Kurz adresses the audience on stage as supporters in the background hold numbers reading the results of Austrian People’s party after the first exit polls during the party’s electoral evening at their headquarters in Vienna, Austria, on September 29, 2019.
JOE KLAMAR/AFP/Getty Images

Sebastian Kurz’s election victory on Sunday will be remembered as a turning point in European political history.

On May 27, it was speculated that Kurz had seen his last days in an astonishing career. The youngest-ever chancellor of Austria was ousted in a vote of no confidence. Today, he is back with more power than ever. Kurz’s ascent to power is a fascinating story full of intrigues, scandals and heroism. It also highlights the people’s yearning for messianic-style leadership. All this has profound implications for Austria, Europe and the whole world.

Before Kurz’s ascent to power in 2017, the Austrian People’s Party (övp) polled below 20 percent. As a junior partner in a coalition with Austria’s Social Democrats (spö), the övp was fading into insignificance. The polls showed the party far behind not only the spö but even the far-right Freedom Party (fpö), which was nearing 30 percent.

Today, the övp stands in first place. With 37.5 percent support, the övp holds as many votes as its next largest rivals combined—spö at 21.2 percent and fpö at 16.2. The tables have turned dramatically to the sole credit of one man: Sebastian Kurz.

A few months ago, some saw Kurz as politically dead. Today he stands without competitors. Kurz’s recipe for success is admired throughout Europe. Astonishingly, it is also what the Bible prophesies will dramatically change Europe’s destiny.

Kurz’s rise to power was marked by obstacles and scandals that would have halted most other leaders. But instead of giving up, Kurz extended his power at the expense of his political opponents. And his sensational success in 2017 was surpassed by another 6 percentage points in Sunday’s election.

To grasp how phenomenal this victory is, you must understand the crisis that led up to it.

The most recent scandal erupted last May, after Kurz had only governed for 17 months. Critics believed Kurz made a historic mistake when he decided to govern with a party allegedly founded by Nazi sympathizers. The critics thought themselves proved right as a trap video surfaced that exposed fpö leaders’ willingness to use corruption to gain political advantage. The video brought heavy criticism on the fpö, and Kurz came into the center of the crossfire.

“He was declared politically done after the government crisis in May,” Wolfram Weimer wrote for n-tv.de on September 24. “First editorials already called him a lightweight unmasked, disempowered and hunted from Ballhausplatz”—the square in Vienna containing the government buildings.

Kurz responded by turning against his coalition partner, demanding resignations, and calling for reelections. His coalition partner refused to cooperate. Parliamentarians accused Kurz of a shameful lust for power. They demanded that, instead of being rewarded with more power, he too face the consequences of his coalition partners’ mistakes. Kurz’s attempt to form a minority government was prevented by a successful no-confidence vote against him. He was out of office.

But Kurz was undeterred. He knew that the people he needed to convince were not sitting in parliament but at home, captivated by their phones and screens. Instead of wallowing in self-pity, he went on the offensive. He blamed the government crisis on the fpö and spö, who joined forces to oust him out of power, and headed out on the campaign trails. For four months, he worked furiously to persuade the people to vote him back.

But Kurz wanted more than merely a return to power. On Twitter he declared that he wanted more seats in parliament to disable the opposition from ousting him again.

Now, he has achieved that goal. What looked like Kurz’s political end has served as a stepping-stone to more power. He now has a rare chance in Austrian politics to choose his coalition partners or form a minority government.

Whatever form of governance Kurz decides on, the rest of Europe envies his success. In an era where leader after leader is struggling, Kurz boosted his popularity despite scandals.

In “The Kurz Experiment,” theTrumpet.com managing editor Brad Macdonald summarized Kurz’s recipe for success. Among other things Kurz is known for his closeness to the people, his opposition to German Chancellor Angela Merkel’s refugee policy, and his vision for Europe. But there is one more quality of Kurz that defines his rule most.

“Perhaps the most underestimated characteristic of Sebastian Kurz is his Catholic faith,” Macdonald explained. Kurz often speaks of his religion, holds meetings with religious representatives, and surrounds himself with a predominantly Catholic team.

He is a staunch Catholic, and outspoken about the fact that his religion guides his politics.

Kurz is only 32 years old, but he captured the imagination of his countrymen, and they promoted him to lead the nation. He is very popular in Austria, and also across Europe! He is looked up to as a key figure in European politics.

Kurz is close to the archbishop of Vienna, Christoph Schönborn, whom several authorities believe could become the next pope. When he was foreign minister, Kurz sought the counsel of a Catholic priest on how to deal with the migrant crisis. The actions he took after that meeting actually stopped the influx of migrants into Germany and Eastern Europe. German Chancellor Angela Merkel opposed his actions, calling them anti-humanitarian. But Kurz believed his actions aligned with his Catholic faith.

Due to Kurz’s alignment with the Catholic Church, all his policies that some view as far right, many others see as moral. His strong stance in the refugee crisis is legitimized by his religious faith and Schönborn’s support. The people who morally opposed a close-border policy find themselves trusting Kurz’s leadership.

One of Kurz’s friends is Karl-Theodor zu Guttenberg. Speaking about Kurz’s coalition with the fpö, Guttenberg told the Austrian newspaper Kleine Zeitung on May 4 that he believes “the övp part of the government is operating very strong” and that the opportunity may come to “disenchant” the far right. In a later interview, he made similar comments about Germany’s far right.

Disenchantment means to rid of or free from enchantment or illusion. In other words, Guttenberg hoped the far right would be exposed and lose significance. Looking back on how Kurz dealt with the fpö, one could say Kurz disenchanted the far right. The party that was headed toward mainstream acceptance has been exposed and is diminishing.

As a result, Kurz regained the trust of millions of people—and the Catholic Church played a major role.

In a Key of David television program that aired last December, Mr. Flurry explained that the Bible reveals Europe is about to be ruled by 10 kings who form one empire. “Even now, Europe is morphing into a great empire,” he said. “Soon, the European superpower will be pared down to 10 nations that model themselves after the tradition of Charlemagne. The recent comments by Karl-Theodor zu Guttenberg and Sebastian Kurz are a sign of the Continent’s change in direction!”

Revelation 17:12 reads: “And the ten horns which thou sawest are ten kings, which have received no kingdom as yet; but receive power as kings one hour with the beast.” Our free booklet Who or What Is the Prophetic Beast?, by Herbert W. Armstrong, explains that the 10 kings are 10 European rulers that, as verse 1 shows, ally themselves with the Roman Catholic Church to resurrect the Holy Roman Empire.

We are seeing the start of this prophecy being fulfilled.

Today Kurz is seen as a role model for European leaders. Copying his success will drastically change European politics. It also points to the astonishing fulfillment of Bible prophecy and the greatest event ever to occur in mankind’s history. Revelation 17:14 shows that these kings will be on the scene when Jesus Christ—“Lord of lords, and King of kings”—returns to Earth!

In this context, the timing of Kurz’s reelection is interesting. The election took place the day before the Feast of Trumpets, one of God’s annual holy days outlined in Leviticus 23. This festival, which was kept by ancient Israel, as well as Jesus Christ and the apostles, points to the day when men’s rule over men will end, as Mr. Armstrong explained in his booklet Pagan Holidays—or God’s Holy Days—Which?

Today, millions of Austrians have put their trust in one man. All of Europe is seeking strong leadership. But the Bible reveals that this hope in man is a false hope that leads to destruction. Only God can bring peace to this world, and He will only intervene in mankind’s affairs once this lesson is learned.