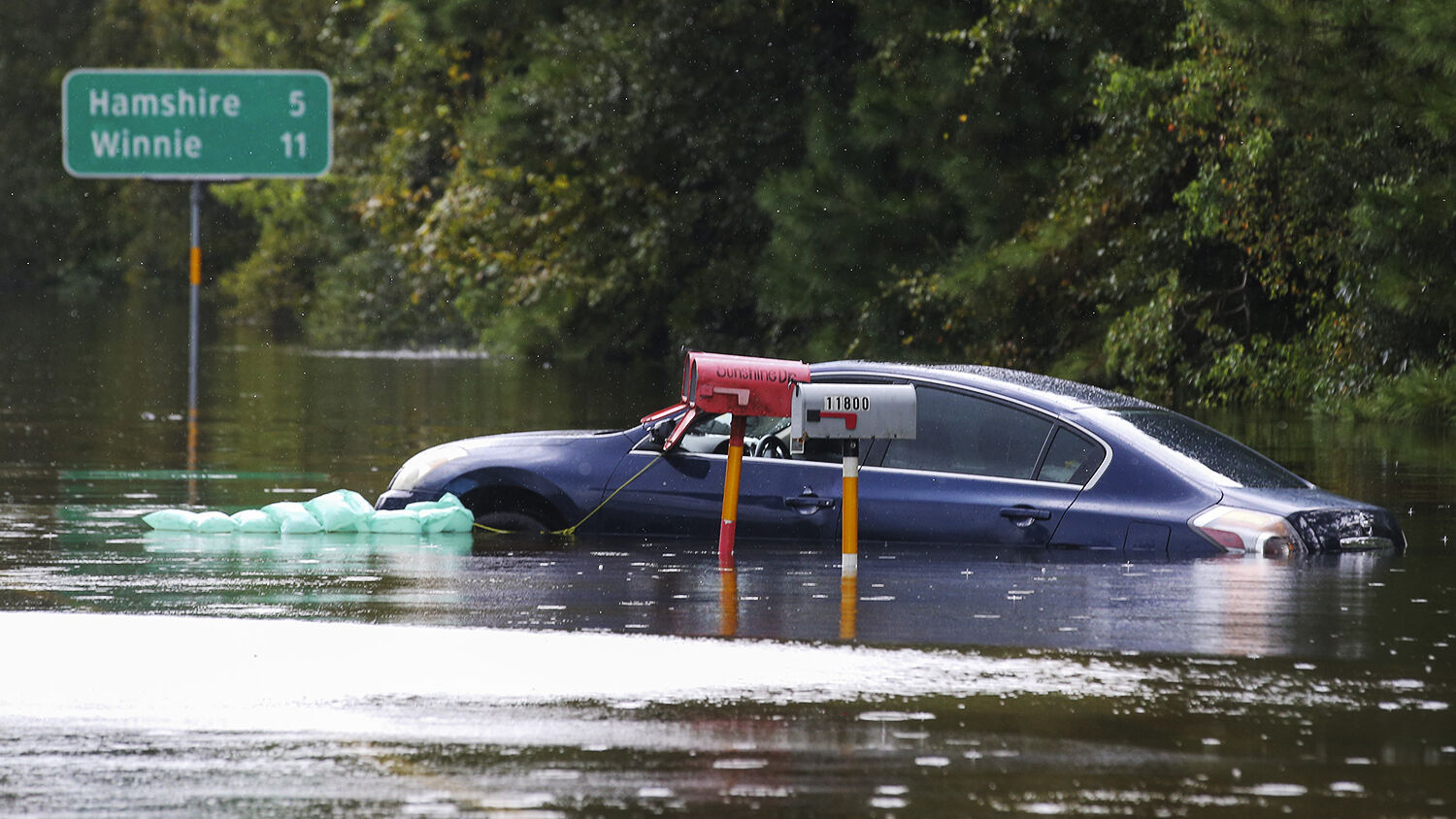 A car sits in floodwaters on Highway 124 on September 20 in Beaumont, Texas.
Thomas B. Shea/Getty Images

Human actions can alter the weather—but not in the way most people think.

Tropical storm Imelda flooded parts of Southeast Texas and Southwest Louisiana on September 18. Five have died so far in the fifth-wettest storm ever to hit the continental United States. After another deadly flood in Texas, people are talking about taking action against climate change. Action is indeed required—but in a different way than most think.

Floodwater rose to the top of traffic lights in some areas. In other areas, people had to trudge along the streets in knee-deep water. Gov. Greg Abbott declared a state of disaster for 13 counties and a state of emergency for all of Texas.

As a tropical storm, Imelda dropped 20 to 42 inches of rain over a three-day period. Even over a period of two months, this amount would be excessive. Flooding destroyed hundreds of houses and vehicles. In Galveston County, floodwaters disabled a water treatment plant. Officials have said that residents might be without fresh water for a month.

Houston Airport grounded all aircraft, and the city stopped all public transport. Restrictions were placed on tankers entering Houston Ship Channel. A health-care provider in the area told usa Today that the storm was “worse than Hurricane Harvey.”

Imelda caused “significant and life-threatening flash flooding,” according to the National Hurricane Center. Some of the areas affected were also hit by Hurricane Harvey in 2017 and were still recovering from the damage. But Imelda has also flooded areas unharmed by Harvey.

In addition to the disastrous flooding, Imelda spawned tornadoes, which damaged houses and vehicles in Baytown, 25 miles east of Houston.

The destruction is devastating. And the search for a cause has begun.

Climate change was the first to get meteorologists’ blame. One meteorologist tweeted that in a stable climate, events like this would happen only once every century. Articles abound detailing how hotter oceans are creating windier, wetter storms. But is this the right place to look for answers?

“Although average temperatures have been higher in recent years, there is no evidence so far that extreme heat waves are becoming more common because of climate change, especially when you consider how many heat waves occurred historically compared to recent history,” reported Accuweather.

There have been many examples of failed climate-change predictions over the years. These include cities being underwater by the year 2000, acid rain destroying all life in the Great Lakes, and a new ice age by 2020. The Competitive Enterprise Institute alone noted 27 failed predictions; others abound.

In Why ‘Natural’ Disasters? we note that this view about climate change has taken hold of millions of minds around the world. It is often presented as irrefutable scientific fact. The truth, however, is that it is an ideology, and it will negatively affect every person who falls for it!

“This is not a political view,” we write. “We aim to give you God’s view. Our great Creator knows that climate change is not the cause of weather disasters!”

People immediately scoff at the idea that Bible prophecy could provide the cause of one of humanity’s oldest problems. But Bible prophecy pertains to the time we are living in today. Notice one Bible prophecy in particular: “And also I have withholden the rain from you, when there were yet three months to the harvest: and I caused it to rain upon one city, and caused it not to rain upon another city: one piece was rained upon, and the piece whereupon it rained not withered” (Amos 4:7). Our booklet states:

Notice—this is God speaking through His Prophet Amos. He controls rainfall, causing floods and droughts! God causes these weather disasters! In one region God sends a drought—in another region, floods—and it all happens right before harvest time.

In August 2017, hurricanes Harvey and Irma flooded Houston with over 50 inches of rain, and torrents of water filled cities across America’s Southeast. At the same time, the West Coast was parched, and fires were scorching millions of acres! It was exactly as God prophesied through Amos!

“God causes these conditions as punishment for pushing Him out of our lives,” we write. “He is trying to get people to return to Him! This prophecy should help us see the connection between extreme weather upsets and human sin. Certainly we must pray—but we must also return to God! Returning to God requires real, tangible action.”

To learn more about the actions you can take to be shielded from weather disasters, read our free booklet Why ‘Natural’ Disasters?