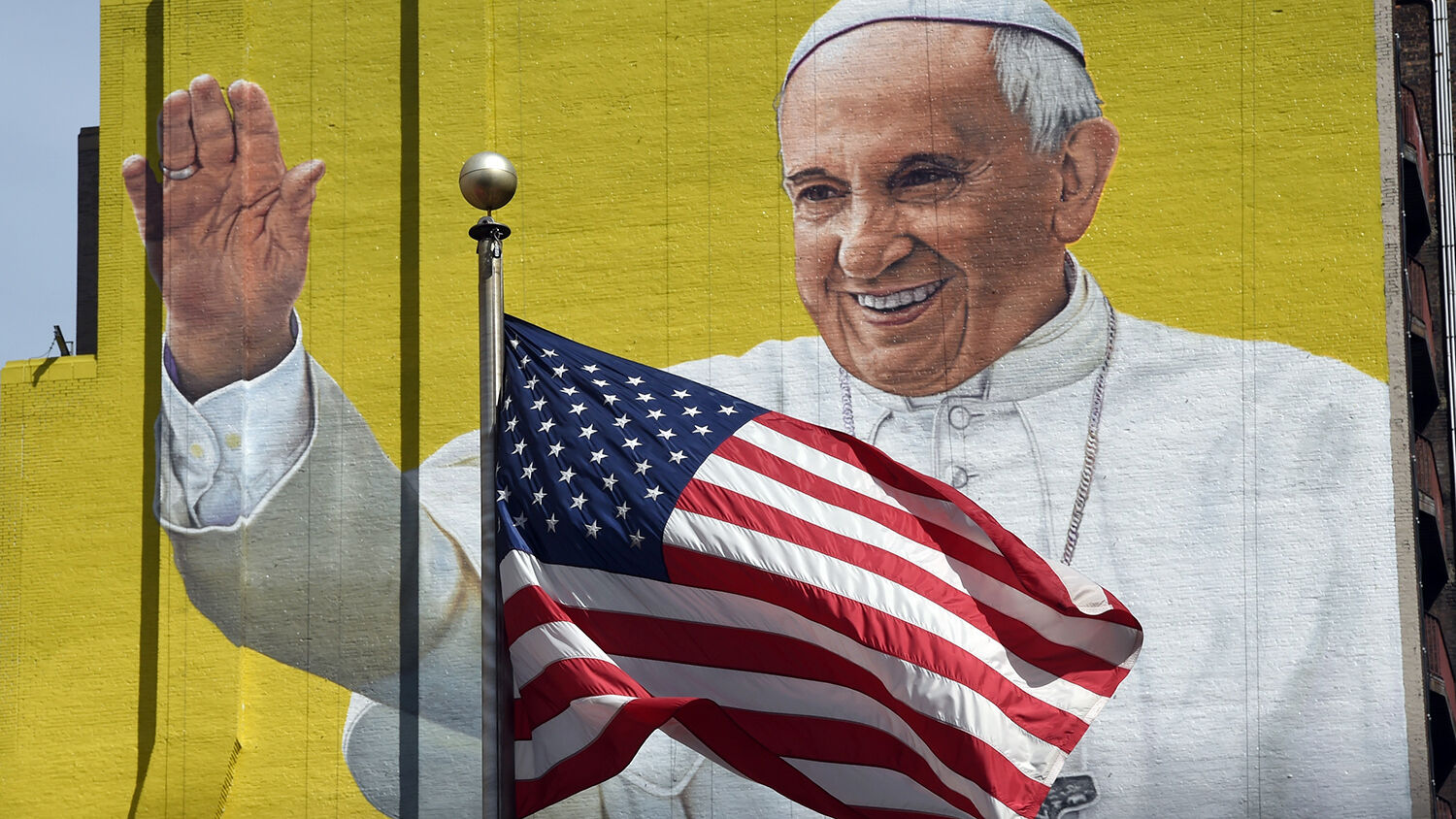 A U.S. flag blows in the wind in front of a mural of Pope Francis across the street from Madison Square Garden in New York on Sept. 21, 2015, as the city prepares for his visit.
TIMOTHY A. CLARY/AFP/Getty Images

The Bible foretells division between the United States and the Roman Catholic Church.

During an in-flight press conference on September 10, Pope Francis told reporters he was praying there would be no schism within the Catholic Church but was not afraid of facing one. The pontiff made this statement after New York Times journalist Jason Horowitz asked him, “Are you afraid of a schism in the American church?” After noting that he was unafraid, Francis went on to accuse some of his critics in the United States of stabbing him in the back.

“Criticisms are not coming only from the Americans, they are coming a bit from everywhere, even from the curia,” the pope said. He continued:

At least those that say them have the benefit of the honesty of having said them. I do not like it when criticism stays under the table: they smile at you letting you see their teeth and then they stab you in the back. … I am not afraid of schisms; I pray that there will be none, because what is at stake is people’s spiritual health. … A schism is always an elitist separation stemming from an ideology detached from doctrine. It is an ideology, perhaps correct, but that engages doctrine and detaches it …. And so I pray that schisms do not happen, but I am not afraid of them.

But why is the pope even talking about a schism?

Jason Horowitz’s question about “schism in the American church” was prompted by the release of a book by French journalist Nicolas Senèze, titled How America Wants to Change the Pope. The book quotes Prof. Massimo Faggioli of Villanova as saying that wealthy conservative Catholics are exploiting the moral crisis caused by the Catholic sex abuse scandal to become the de facto leaders of an Americanist Catholic Church.

According to Senèze, these American Catholics oppose Pope Francis because of his opposition to capitalism and his obsession with reducing fossil fuel emissions to combat climate change. Their goal is to use the sex abuse scandal to push Pope Francis to resign, thus triggering a conclave to elect a new pope more aligned with American interests.

Yet Pope Francis has been dismissive of American criticism. “[T]he social things that I say are the same things that [Pope] John Paul ii said, the same things,” Francis told Horowitz. “I copy him. But they say: The pope is a Communist.”

Earlier this month, when Senèze presented a copy of his book to Pope Francis, the pontiff replied, “Per me è un onore che mi attaccano gli americani (For me, it’s an honor that Americans attack me).”

It currently seems unlikely that U.S. Catholics will actually split from the Roman Catholic Church over disagreements about capitalism, climate change, and the ongoing Catholic sex abuse scandal (it’s a lot easier to just wait for the next conclave). But the division between U.S. Catholics and the Vatican is deeply significant.

Senèze points out in his book that at the time of the Declaration of Independence, America’s founders were dedicated to religious freedom but suspicious of the country’s Catholic minority (which was viewed as more loyal to the Vatican than the American Republic). So, over the next few centuries, U.S. Catholics developed their own unique culture—one that deferred to the pope on ecclesiastical matters, but not necessarily on political issues.

In 1898, Pope Leo xiii wrote a papal letter, Witness to Our Goodwill, declaring “Americanism” as heresy. In particular, he condemned American ideals of individualism and separation of church and state to be heretical fallacies.

In some ways, the Catholic Church in the United States has been in pseudo-schism with the Vatican for centuries. So even if a new pope is elected who is more conservative on certain points of Catholic doctrine, American Catholics will still go their own way on economic, environmental and many other issues.

Bible prophecy reveals that there is a lot of significance in what is happening between America and the Vatican. A clash of civilizations is coming between Anglo-America and a Vatican-dominated empire. And yet most people are completely unaware.

It is important to recognize that Pope Francis and the College of Cardinals are actively working to establish a new system of world government. The Roman Catholic Church doesn’t believe the Kingdom of God is a literal kingdom to be established on Earth by Jesus Christ at His Second Coming. The Catholic Church’s position is that the Kingdom of God is a modern-day church, ruled by the vicar of Christ. Biblical prophecy describes a church existing in the end time that holds significant political influence with “the kings of the earth.” It will have particular power over a political-military union of nations described in symbolic terminology as a “beast” (Revelation 17). This description can only apply to one church in modern history—a church that meddles in the affairs of nations and considers itself mother to all.

In Isaiah 47, God calls this church the “daughter of Babylon” and the “lady of kingdoms.” Verse 6 of this chapter prophesies that God will deliver His people—speaking of the modern-day nations descended from ancient Israel, primarily referring to the United States and Britain—over to this “lady of kingdoms” because of their many sins. The Catholic Church and the U.S. are fundamentally part of two different power blocs.

Division between America and the Vatican will escalate until a transnational alliance dominated by Germany and the Vatican attacks the U.S. For information on why God would allow such a calamity to occur, please read Who or What Is the Prophetic Beast?, by Herbert W. Armstrong.