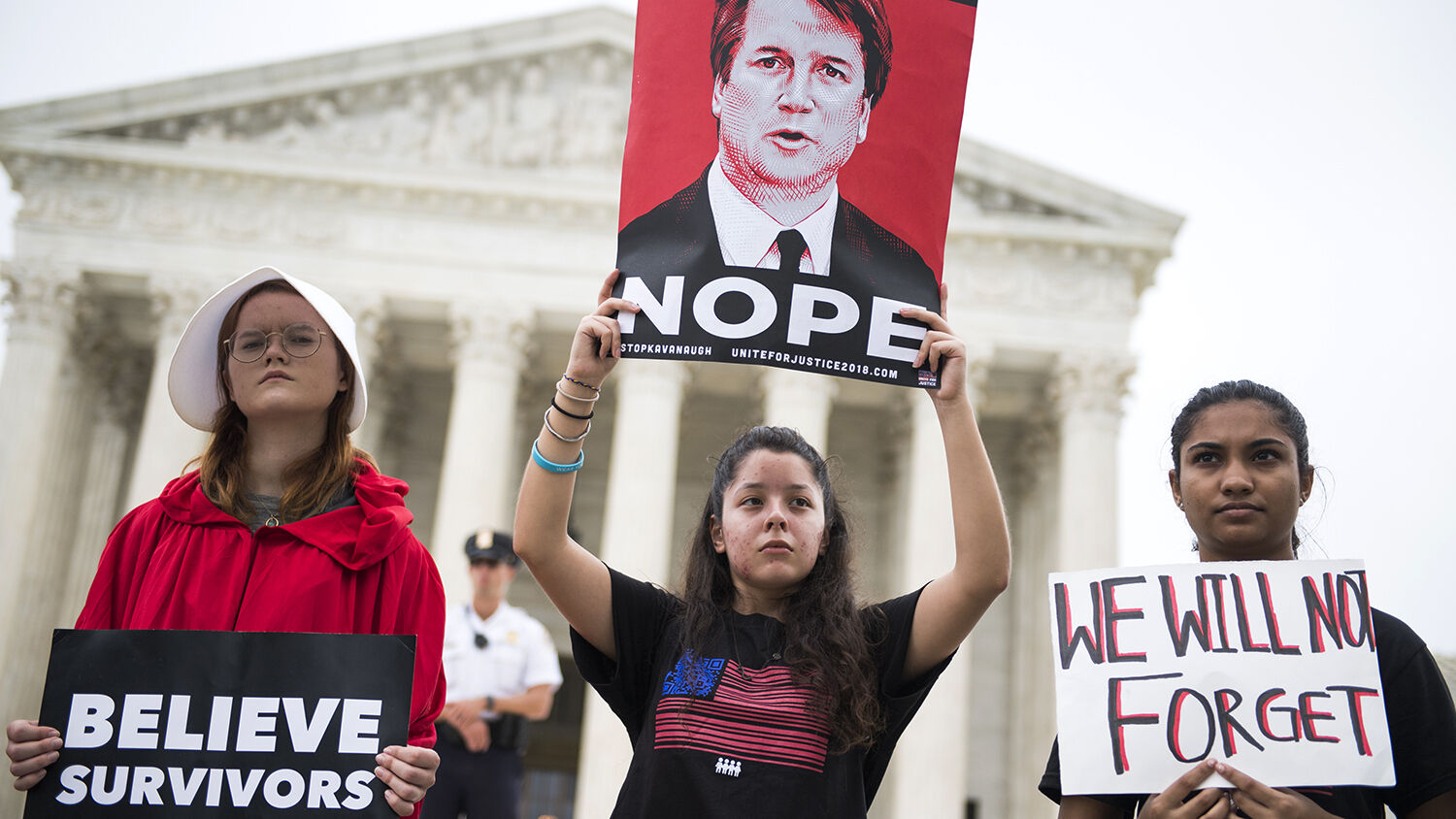 Protesters demonstrate in front of the Supreme Court to oppose then Associate Justice Brett Kavanaugh on his first day of hearing arguments on Oct. 9, 2018.
Tom Williams/CQ Roll Call

The New York Times published an article on September 15 bringing new accusations against Supreme Court Justice Brett Kavanaugh. For over a year, his opponents have demonized him with charges of sexual assault. Yet they have never been able to prove their accusations true. But a pair of New York Times reporters have attempted to give the accusations new life with a new book.

Reporters Robin Pogrebin and Kate Kelly recently published a book titled The Education of Brett Kavanaugh, of which the New York Times published an excerpt under the title “Brett Kavanaugh Fit in With the Privileged Kids. She Did Not.”

The essay brings up old accusations and presents a new one. But one of their accusations was so unclear that mainstream news sources refused to get onboard. This draws attention to a new level of lawlessness entering American politics.

The essay begins by describing the victim, Deborah Ramirez, as a sheltered Catholic who was in over her head at worldly Yale University. Portraying Yale as sexist, it states that women were admitted for the first time in 1969. What it does not say is that this only refers to undergraduates. Yale’s own website shows that the first women enrolled in 1869, and some graduated from prestigious programs like the Yale Law School as early as the 1880s.

“During his Senate testimony, Brett Kavanaugh said that if the incident Deborah Ramirez described had occurred, it would have been ‘the talk of campus,’” write @rpogrebin and @katekelly. “Our reporting suggests that it was.”https://t.co/k6L6j4Qd1c

The accusation centers around a dorm party in Kavanaugh’s freshman year. There, Ramirez was reportedly the victim of an inappropriate sexual act. The Times attributes this to Kavanaugh. But there are several holes in the story.

Ramirez is never quoted saying Kavanaugh did anything to her. She never identifies him. Her few quotes convey feelings of disorientation common for university freshmen. The tragic events described in the piece may have happened to her. But they all fail to mention Kavanaugh.

Then the Times alleges that Kavanaugh committed a similar inappropriate act at another dorm party. Max Stier, a lawyer for Hillary Clinton and classmate of Kavanaugh, reportedly told the Federal Bureau of Investigation about the incident. He refused to discuss it with the authors of the story.

The original Times article also omitted a key detail: Stier’s witness had no recollection of the events and declined an interview. The Times was forced to issue a correction, adding in this vital detail after it was published. Pogrebin and Kelly accused their editors of removing the statement during an msnbc interview on September 16.

Meanwhile, the Washington Post acknowledged that the sexual assault accusation remains uncorroborated. It called the Times article a “monument to hearsay and a travesty of journalistic ethics.” Many condemned the dubious claims. Mollie Hemingway, editor of the Federalist, called it “journalistic malpractice.”

Ralph Blasey, father of Christine Blasey Ford, went out of his way to congratulate Ed Kavanaugh on his son’s confirmation to the Supreme Court, reported the Federalist. This damaged the credibility of Ford’s accusations, as it is unlikely her father would applaud a man whom he believed had harmed his daughter. Leland Keyser, a friend of Ford, also could not remember any of the indecent acts Ford described. Ford herself failed to give any dates or locations during the testimony.

Kavanaugh’s demonization was a baseless, politically motivated attack on his character to prevent a Republican majority on the Supreme Court.

Trumpet editor in chief Gerald Flurry wrote in “The Kavanaugh Hearings Reveal America’s Lawless Spirit” that the battle over Kavanaugh’s confirmation was “probably the ugliest, most embarrassing spectacle in modern American politics.”

He warned that lawlessness is increasing in America and that the American people do not value truth as they once did. As a result, even outright lies are becoming effective tools in the world of politics. “Innocent until proven guilty” has turned into “guilty until proven innocent,” at least when it comes to people whom the left hate.

“We are getting a hard look at just what the radical left is willing to do in order to seize power and stay in power,” wrote Mr. Flurry in “Saving America From the Radical Left—Temporarily.”

Americans are divided on many issues, and they don’t know the real reason why. This ignorance is because they are dealing with an evil spiritual force. It cannot be perceived by the five senses, but it is real and is methodically bringing down America from within.

Satan the devil is the real cause of America’s divided, angry politics.

Revelation 12:12 reveals that Satan is our deadly adversary. He is the one behind these dangerous developments. The devil is full of wrath, and he has gotten control of the radical left. The fruits prove it. These people want to bring this system down. They are deceived (verse 9). But the problem is much deeper than that.

America’s real enemy is not a political party, but the powerful spiritual force behind that party. To understand why America is divided and the only way these seemingly endless problems can and will be solved, read Gerald Flurry’s article “The Kavanaugh Hearings Reveal America’s Lawless Spirit” and order your free copy of Great Again.