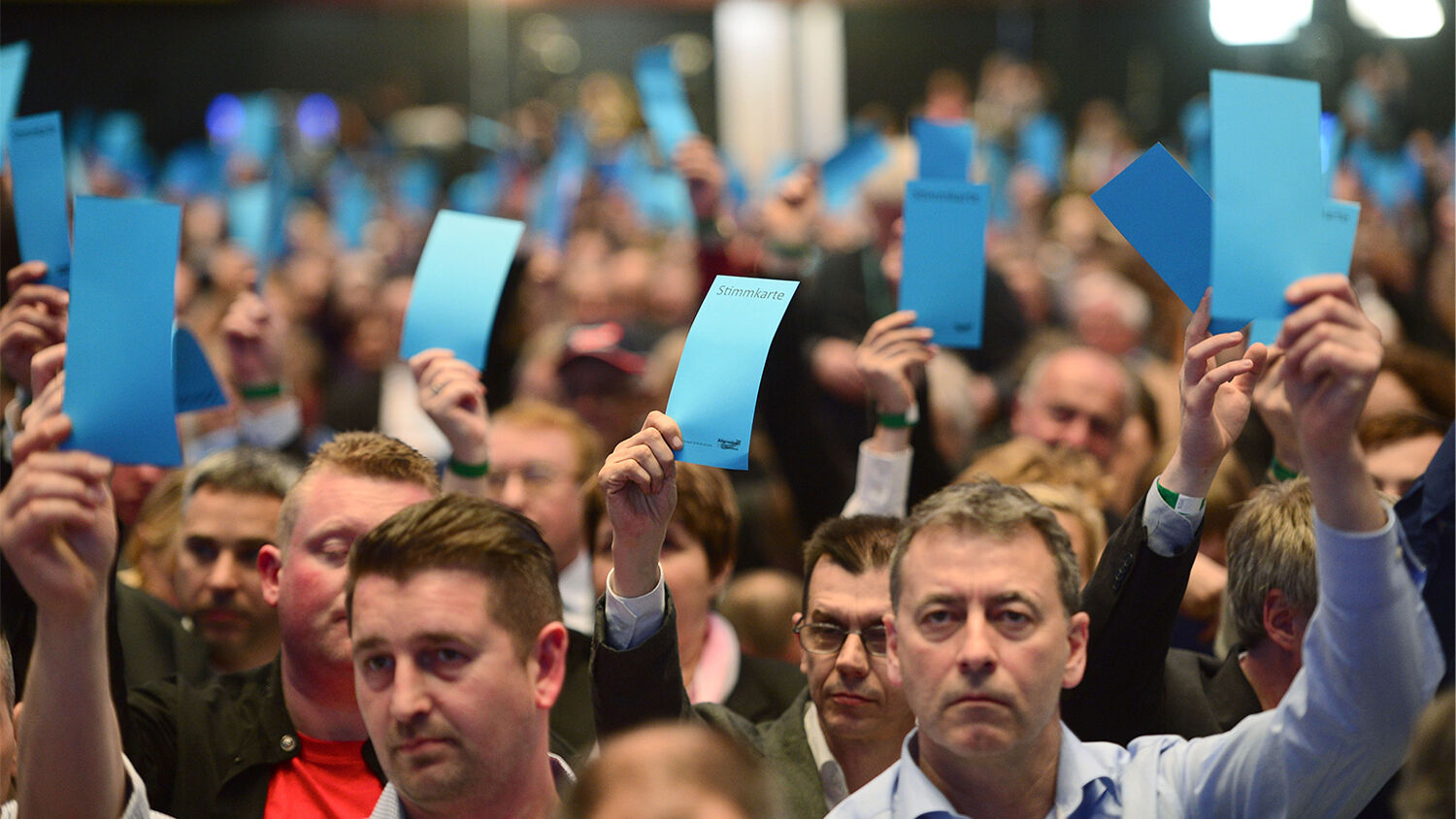 The rise of the Alternative für Deutschland (AfD) party proves that Germany is ripe to accept another dictatorship. That is the warning Niklas Frank, the son of a Nazi governor-general of occupied Poland, Hans Frank, gave in an article for Der Spiegel. Niklas Frank has studied his father’s legacy. And today, he is warning that Germany’s cruel past could soon be a new reality. One of his main concerns is that the majority of Germans are unwilling to defend democratic values.

Mr. Frank has delivered similar warnings to the Trumpet before.

He said that much of the rhetoric his father used is being revived by Germany’s AfD with a shocking acceptance among the people.

Hans Frank was responsible for the death of millions before he was hung in Nuremberg. It’s shocking that a man can order the deaths of thousands of women and children and, then moments later, provide the most basic needs for his own family. Niklas Frank has tried to understand this mindset.

Many have a misconception of Adolf Hitler’s henchmen. Few understand that they were as human as any other citizen in the Reich. Quite often they were more cultured and sophisticated than the average citizen.

Though no one in Germany is currently committing such crimes, Frank believes that Germany no longer deals with its past the way it should. The AfD is using less extreme language, but the themes are the same. In his article, Frank highlighted AfD statements that attack the freedom of press, demand the end of Germany’s culture of remembrance, dehumanize refugees, and play with dictatorial principles.

Frank said such rhetoric is like hearing his father again. People “of my father’s kind, who want to poison my brain, are reappearing,” he warned. “I am 80 years old. All my life I have heard this silly silence of not really wanting to acknowledge our crimes. But only if we recognize them, can we, despite the associated pain and anger, lay down an honest life without hatred.”

Frank’s warning is sound. Only if you truly understand the past can you properly deal with it. Germany, as a whole, has amazing potential. It’s one of the most accomplished nations in the world. But to truly seize that potential and use it without restraint, it has to thoroughly learn the lessons from its past, rather than seeking to forget it.

But Frank’s warning is for more than one political party. The Nazi party was permitted to exist and even enabled by the people. Today, Germany’s tolerance for the far right is another sign that we haven’t learned from history.

Germany’s incompatibility with democracy is again surfacing. Germans follow orders. The current order is to vote; therefore, many vote. But given the choice, many are inclined to vote for undemocratic parties. Such circumstances led to Hitler’s rise, and it could lead to the rise of yet another dictator.

The climate in Germany is more tense than it was prior to Hitler’s dictatorship. The ideologies of the Nazi regime have poisoned people’s minds for generations. Haunted by a shameful past, these sentiments have been suppressed for decades. But they are reemerging.

People despise the restraints the Allies forced on Germany. Germans want a strong army free of burdensome restrictions. They no longer want to apologize for every military move or foreign political action. As Europe’s largest economy, they no longer want to hide behind their past. During the refugee crisis, Germany took in countless numbers of migrants because they saw it as their duty to help the weak. But they have grown weary. They are ready to take a stand. They no longer want apologetic leaders; they want assertive leaders.

Democracy, as some believe, was something the Allies forced on Germany to suppress the nation’s greatness. For this reason, groups like Reichsbürger, which regards Hitler’s government as the last legitimate German state, are surging in membership.

Certainly, the majority of people do not support all the beliefs mentioned above. But how many Germans would actually oppose another dictatorship? Today, there are only a few thousand who would actively fight against democracy. But the tables could soon turn if the majority remain nonchalant. Frank wrote:

Hitler built up a terrible dictatorship. The German people did not resist it. For me, it is clear why: Among the 80 million Germans then and today, there were and are, at most, 20 million genuine democrats, of which, at most, 100,000 actively campaign for democracy. The rest of the democrats grumble away at home. The result: The silent majority of around 60 million Germans would not defend themselves against an AfD dictatorship.

Although I have worked through archives of only 5,000 randomly selected denazification files of more than 3 million, I know that the best democracy we have ever experienced—our present one—has been built on lies and deceit and perjury. How could that happen? First, the Germans obeyed the Nazi dictatorship. When Hitler and his gang of criminals were murdered, our liberators demanded this form of government. Again, we obeyed. But never from the heart: The generations that followed were poisoned by their parents and grandparents, who helped build Hitler’s dictatorship and supported it to the end.

If the vast majority remain silent, tolerate or even support another totalitarian regime, Germany’s democratic experiment has failed. While there are certainly people who would fight for democracy, you have to ask: Are there enough to keep another dictator from gaining the power of Germany’s military and police?

These contemplations are frightening. But they are not simply conjecture about something that might happen. Bible prophecy specifically foretells that another dictatorship will rise. Daniel 8:23 reads: “And in the latter time of their kingdom, when the transgressors are come to the full, a king of fierce countenance, and understanding dark sentences, shall stand up.” This prophecy, written by the Prophet Daniel, is for our time today. In “Germany—A New King Is Imminent,” Trumpet editor in chief Gerald Flurry explained the term “king”:

Germany has historically gravitated toward such leadership. But the fact that we are seeing this trend repeat itself, despite the historic precedent, is astonishing and proof of the Bible’s forecast. Mr. Flurry continued:

Notice how this man is characterized. He has a “fierce countenance,” meaning he’s mighty, powerful and cruel. He has an “understanding [of] dark sentences.” Clarke’s Commentary says he’s “very learned and skillful in all things relating to government and its intrigues”—a cunning politician. He inherits the throne of Europe “peaceably,” obtaining his kingdom by “flatteries.” He is crafty and sly, with a brilliant mind and an engaging, attractive personality. The Jamieson, Fausset and Brown Commentary says, “[T]he nation shall not, by a public act, confer the kingdom on him, but he shall obtain it by artifice, ‘flattering.’” In other words, a deceived public, or a group of European leaders, likely invites this man into power.

This man may appeal directly to the people or parliament for power, but he will not go through today’s democratic channels. In previous decades, he would have likely faced great opposition from the general public. But Germany today is much more keen to accept him in hope of progress and security.

Watch Germany’s mood change. It is setting the scene for a strongman to dramatically change the course of the country. This trend has far-reaching implications for the whole world. Germany will again commit horrifying atrocities. The world will yet see a worse dictatorship than Hitler’s emanating from Germany. But in the process, it will learn how misleading human governments are. Once this lesson is learned, Germany will have a wonderful future under God’s government. To learn more about these astonishing prophecies and where they are leading this world, read “Germany—A New King Is Imminent,” by Gerald Flurry.