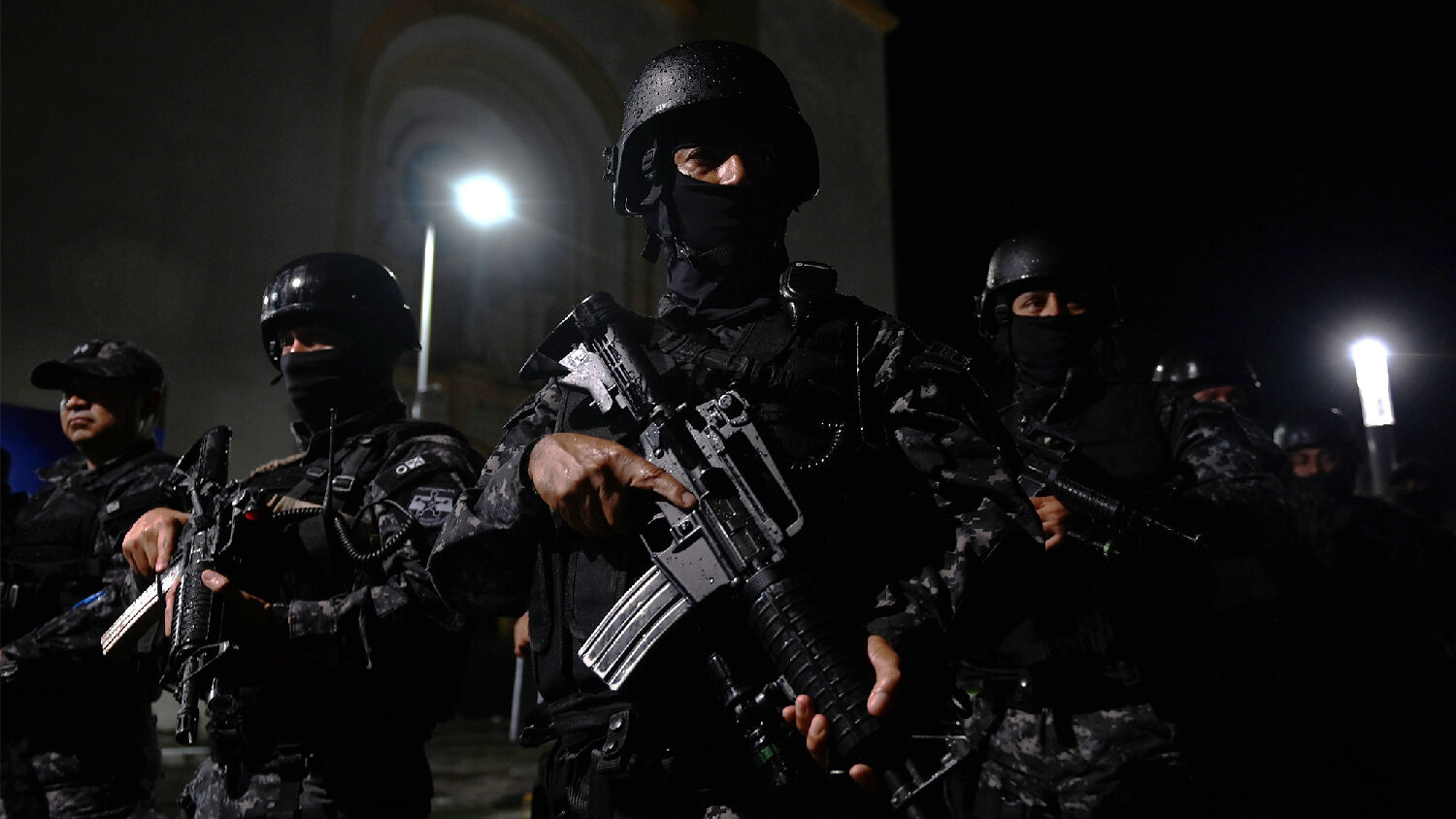 Police officers stand at attention in the historic center of San Salvador on June 20 during the launch of a new security plan pushed by President Nayib Bukele to reduce violence in areas dominated by gangs.
MARVIN RECINOS/AFP/Getty Images

Growing dissatisfaction with liberal democracy will soon push Latin America into an alliance with the Holy Roman Empire.

This is alarming. Support for democracy as the preferred form of government has declined systematically throughout Latin America since 2010. Now just 48% favor democracy, says @Latinobarometro pic.twitter.com/xh8kt7mb0O

People from the following nations were most likely to say it does not matter whether a nation has a democratic government or not: El Salvador (54 percent), Honduras (41 percent), Brazil (41 percent), Mexico (38 percent), Panama (34 percent), Guatemala (34 percent) and the Dominican Republic (29 percent).

During the late 1970s, dictators ruled 17 out of 20 Latin American nations. Today, nearly every Latin American nation except Cuba and Venezuela have a democratic form of government. But an increasing number of people yearn for a political strongman who can solve problems like corruption, crime and inequality.

“The reason for this failure of democracy goes beyond the political,” wrote Maria Ariana in an August 27 Time editorial titled “Latin Americans Are Souring on Democracy. That’s Not So Surprising Considering the Region’s History.” “Just as silver brought wealth to the Spanish elite but unspeakable cruelty to native Americans, an extractive society and an unrestrained illegal drug trade have brought riches to a very few and conflagration to the overwhelming many.”

Latin Americans today are souring on democracy. Given the region’s history, argues Marie Arana, that’s not so surprising https://t.co/8UxNzQ4mzZ

In El Salvador, Honduras, Mexico and Guatemala, drug cartels rule many cities, weakening democracy and the rule of law. In Brazil, President Jair Bolsonaro has reinstated commemorations of the 1964 coup that ushered in 21 years of military dictatorship. Bolsonaro is advised on foreign policy by Prince Luiz Philippe de Orléans e Bragança, a royal descendant of both Holy Roman Emperor Francis ii and Brazilian Emperor Pedro ii. Bragança’s uncle, Prince Bertrand de Orléans e Bragança, claims that Bolsonaro’s election is the first step toward restoring the Brazilian monarchy. Roughly 11 percent of Brazilians would like to see this happen.

Latin America and the world are headed for an age of strongmen. The Bible prophesies that 10 kings (or dictators) will partner with a false church and lend it their political and military power. The late Herbert W. Armstrong explained in his classic booklet Who or What Is the Prophetic Beast? that these 10 kings are 10 authoritarian leaders who will reign over a union of 10 European nations in the tumultuous days before Jesus Christ’s return. Roman Catholicism will be the ideological glue that binds these 10 nations together; that religion will also bind many other nations to this empire.

Latin America has the largest population of Catholics in the world. The Holy Roman Empire colonized Brazil and the rest of Latin America in the 16th century. Based upon these facts, Mr. Armstrong prophesied for decades that Europe would develop an increasingly powerful alliance with South America. The nations of Latin America will turn their back on American-style democracy and come under the influence of authoritarian European leaders. They may even turn to some authoritarian leaders of their own, caudillos with the power to carry out Europe’s agenda in Latin America.

Revelation 17 and Isaiah 47 refer to the religious and political power of the Holy Roman Empire. This power, known as “Mystery, Babylon the Great” in Revelation, is referred to as the “daughter of Babylon” and the “lady of kingdoms” in Isaiah. Because God is “wroth” with the modern descendants of ancient Israel for their sins, He turns them over to this power.

Anyone who knows the bloody history of this empire knows this is terrifying news for the near future. Yet it is all part of a plan explained in your Bible.