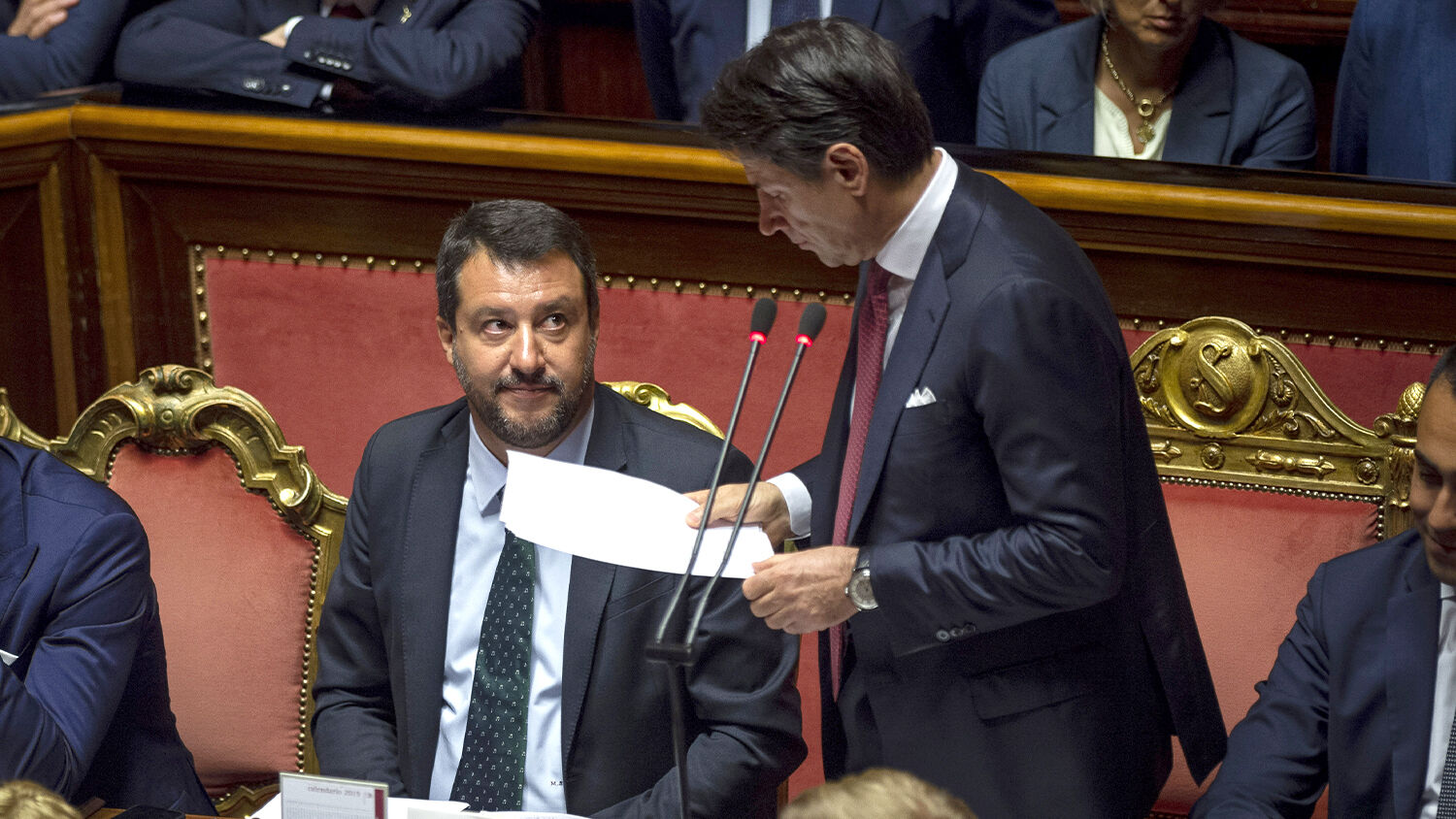 Italian Prime Minister Giuseppe Conte flanked by Interior Minister Matteo Salvini delivers his speech during the statements on the government crisis at the Italian Senate, on August 20, 2019 in Rome, Italy.
Antonio Masiello/Getty Images

Italy’s crisis may contribute to Europe’s prophesied transformation and the rise of yet another strong Catholic leader.

Facing increased political pressure, Italian Prime Minister Giuseppe Conte announced his resignation on August 20. After a mere 14 months of governing, Italy again faces political uncertainty. But this time, it is caused by the well-calculated moves of a man whom Conte calls a traitor and millions of Italians call a hero: Interior Minister Matteo Salvini.

Since the formation of Italy’s government in May 2018, Salvini’s Lega Party’s popularity went from 17 percent to 38 percent of the people’s votes, as recent polls indicate. Under Italy’s current Constitution, a party can have a majority in Parliament if it receives more than 40 percent of the popular vote, and Salvini is tantalizingly close. Salvini’s popularity and the ongoing dispute with his coalition partner, the Five Star Movement, have led Salvini to call for new elections. His appeal to Parliament earlier this month, however, has been rejected.

Parliament may have temporarily stopped Salvini’s power grab, but his popularity continues to soar among the people. Italy’s political crisis is coming at a critical time. The country needs to establish next year’s budget. Facing pressure from the European Union to pursue greater austerity and from the Italian people to relieve financial burdens, the challenge couldn’t be greater.

Salvini saw the situation as a perfect time to burst the government. He is promising relief for the citizens and opposition to the EU.

Salvini is Italy’s new hope and he is sending shockwaves through the EU establishment. His political moves could not only affect Italy, they could lead to the emergence of a changed Europe.

To understand where the country is leading, it’s crucial to know what makes Salvini popular.

Italy has had 10 prime ministers since the turn of the century. During the same time in Germany, there have only been two chancellors, and the second is still in office. In this time, Italy has suffered a major economic crisis and has recently been hit by the refugee crisis. Italians are fed up with politicians and their verbal promises. They want action.

Salvini is a man of action.

After Italy’s 2018 elections, Salvini’s right-wing Lega Party formed a coalition with the populist, anti-establishment Five Star Movement. The two parties agreed to appoint party independent Giuseppe Conte as prime minister. At the time, the Five Star Movement was at 32 percent and Lega at 17 percent.

The Five Star Movement, however, failed to convince the people that it could effectively govern Italy out of the economic crisis and into prosperity.

Salvini, on the other hand, has delivered on his promises to drastically reduce the influx of refugees into Italy. He closed Italy’s harbor and banned sea-rescued refugees from entering.

Today, Lega is nearing 40 percent of the vote, and the Five Star Movement is nearing 15 percent. Just six years ago, Lega was at 4.3 percent, which speaks to Salvini’s ability to rally the common people behind him.

Salvini and the Cross

Next to political opposition, Salvini has also faced much religious opposition from the highest office of the Vatican: Pope Francis. In a country that is almost 80 percent Catholic, having religion on your side matters.

But Salvini faced off against the Vatican’s criticism toward his refugee policy, and Italy’s Catholics rallied behind him. The Roman daily newspaper La Repubblica’s July 8 headline read: “Catholics at the Crossroads: The Pope or Salvini.”

Many Italians are afraid that their land will be overrun by strangers, says the well-known Jesuit Father Bartolomeo Sorge. For a long time, he was the director of the most important Catholic newspaper in the country, the Civiltà Cattolica (Catholic Culture), and is considered a close friend of the pope.

This fear is unfounded, but understandable, said Father Sorge in the Repubblica interview. And this fear is used by the Lega chief and interior minister. Salvini “is making [this fear] to justify what cannot be justified, namely inhuman laws.” Salvini’s security law is going down the same way as the [Italian] racial laws of the Fascist government in 1938, says the 90-year-old Jesuit: Back then, many citizens and also many Catholics disinterestedly dismissed them or even welcomed them only to distance themselves from them years later. That is exactly the line that Pope Francis is currently fighting.

Italy’s fascist government in 1938 was led by Benito Mussolini.

In response to the pope’s criticism, Salvini fought the power of the Vatican with the symbols of religion. By using the rosary and the cross in public appearances, he presents himself as a religious figure that the people can put their faith in. The polls show that Salvini is gaining more and more popularity among Italy’s Catholic population.

The Vatican’s leadership may currently disagree with Salvini’s stance, but this could change.

Italians generally view Mussolini more positively than Germans view Adolf Hitler. Today, many praise Mussolini for the prosperity he brought to Italy. Salvini specifically praised him for the pension system he introduced, while formerly distancing himself from his racial laws. But there is more than religion and economic promises that connect Salvini with Mussolini.

The Spectator wrote on August 17, “Matteo Salvini does have something in common with Benito Mussolini: a gift for connecting with the crowd. He spends much of his time on Twitter and Facebook where he has 3.5 million followers. When he tours Italy, he always leaves the stage to mingle with the crowd. This summer, he has been visiting the country’s beaches, often bare-chested, which is just what Mussolini did. The crowd loved Il Duce [Mussolini]. The crowd loves Il Capitano.”

Salvini connects with the people in a unique way. In swimming trunks and with a cross around his neck, Salvini is gathering the support of Italians on its beaches.

The people love him because he is unlike almost every other politician. “Like no politician before him, the trained journalist seeks closeness to the the common man,” Bild wrote on August 13. “He presents himself as a politician they can touch.” Almost everywhere he goes, he seeks closeness with the people, selfies included.

To understand where the country is leading, it’s crucial to know what makes Salvini popular.

Whether or not Salvini becomes Italy’s next prime minister, he has already shifted the mood of the country. He restored hope of a prosperous Italy that previously felt suppressed by the EU. He has shifted the country from being overwhelmed with compassion for drowning refugees to a country that celebrates its closed harbors. He has made Italy once again believe in the unifying power of religious symbols. Rather than feeling totally disconnected from the establishment, Italians again have a hero to venerate.

“But if Il Capitano does become prime minister,” the Spectator wrote, “Brussels will have another major October crisis apart from Brexit. Salvini is a patriot and hostile to euro imperialism. A government led only by him would break the EU’s fiscal pact on deficit limits and create a major problem in the heart of Euroland.”

Bible prophecy indicates that the current state of the EU will soon change. A new union of 10 core Catholic nations will rise in its midst. In the Trumpet’s March 2019 cover article, editor in chief Gerald Flurry wrote about Europe’s trade deal with Latin America:

If this massive trade deal is finalized this year, then I believe we will see the current 28-nation European Union pared down to the prophesied 10-nation superpower this year as well. Before Europe can be closely tied to Latin America, something will have to change. The current politically and religiously disunified EU will have to become a politically, militarily and religiously unified Holy Roman Empire.

Italy’s government crisis this autumn may very well contribute to this exact outcome. Salvini is rallying Italy’s Catholics behind him, while at the same time seeking to break up the old structures of the EU. Italy is Europe’s fourth-largest economy. After Brexit, Italy’s economic leverage within the union will further increase. Bible prophecy indicates that Italy will be at the heart of a revival of a modern-day Holy Roman Empire.

Salvini is Italy’s new hope and he is sending shockwaves through the EU establishment. His political moves could not only affect Italy, they could lead to the emergence of a changed Europe.

Notice an end-time prophecy in Revelation 17: “So he carried me away in the spirit into the wilderness: and I saw a woman sit upon a scarlet coloured beast, full of names of blasphemy, having seven heads and ten horns. … And here is the mind which hath wisdom. The seven heads are seven mountains, on which the woman sitteth” (verses 3, 9). The Bible often uses the symbol of a woman to represent a church (Isaiah 47; Ephesians 5; Revelation 12). In this case, it refers to a great false church that rules over many nations. The Roman Catholic Church was founded in Rome. That is the only city on Earth that sits upon “seven hills.” The seven heads, or mountains, are also a symbol of seven successive kings.

Notice Revelation 17:10: “And there are seven kings: five are fallen, and one is, and the other is not yet come; and when he cometh, he must continue a short space.”

Rome, along with the Catholic Church, has been at the spiritual heart of the Holy Roman Empire. Many emperors of varying nationality have been crowned in that city. Yet the Bible reveals that there will be one more resurrection of this empire, and Rome will again be at the heart of it.

In order for this prophecy to be fulfilled, Italy needs a powerful and influential leader. Salvini may provide that leadership. Verse 12 further explains: “And the ten horns which thou sawest are ten kings, which have received no kingdom as yet; but receive power as kings one hour with the beast.”

Because of this prophecy, the Trumpet and its predecessor, the Plain Truth, have expected 10 powerful kings to rise in Europe and break away from the rest of Europe to form a powerful superstate. As Mr. Flurry wrote, this prophecy could be fulfilled this year.

As the fulfillment of this prophecy draws near, it becomes increasingly more important to understand why God revealed these prophecies thousands of years ago. To understand that overarching purpose, request a free copy of Daniel—Unsealed at Last!, by Gerald Flurry.