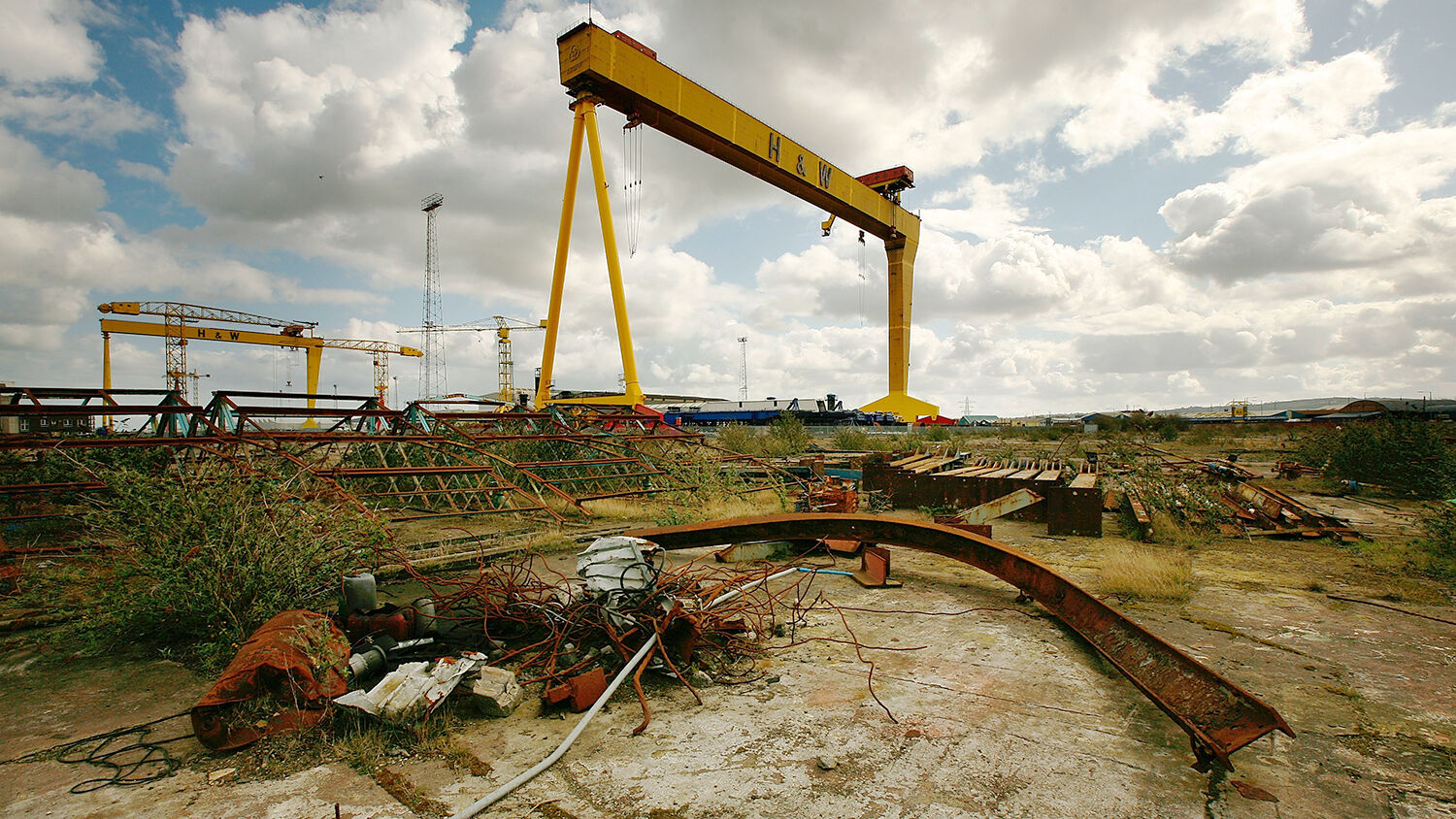 A Harland and Wolff crane looms over undeveloped land at Belfast docks on April 10, 2008, in Northern Ireland.
Peter Macdiarmid/Getty Images

The troubles of Harland and Wolff are deeply symbolic of a navy in decline.

British shipyard Harland and Wolff went into administration on August 5, creating fears that this may be the end of the iconic shipyard after being in business for over 150 years. The demise has been called a “commercial issue” by the government, which refuses to nationalize it to keep it above water. But it is more than that.

The fate of Harland and Wolff is deeply symbolic of Britain’s waning naval and industrial power.

Harland and Wolff is headquartered in Belfast, Northern Ireland. Its two yellow cranes, nicknamed Samson and Goliath, dominate the city skyline. It survived both world wars, the advent of air travel, the partitioning of Ireland, the Northern Ireland conflict, the sinking of its most famous ship—Titanic, and the global financial crisis.

The historic shipyard also holds the world record for the highest number of ships produced during World War ii.

But now its future is bleak.

“The Belfast shipyard has huge cultural and historical significance,” wrote bbc. “Pride and nostalgia for the shipyard extends beyond its industrial heritage or past commercial success.”

In the past two decades, the shipyard has moved away from ship construction to focus on oil platforms and renewable energy infrastructure. But as it began to focus on the oil and gas industry, competition from East Asia gradually drove it out of business.

As #HarlandandWolff is placed into administration, we take a look back at the history of the shipyard. pic.twitter.com/A8zd2lrFlh

The Financial Times wrote that the closing is “more evidence of the decline of Northern Ireland’s once formidable industrial prowess.” It called the shipyard “a shadow of its former mighty self,” which has “survived on scraps” ever since it built its last ship in 2003. It has gone from a thriving business, employing 15,000 people, to a small company of less than 200 workers, occupying a marginal part of the market, mostly servicing oil platforms and offshore wind turbines.

In World War ii, the shipyard churned out everything from minesweepers to aircraft carriers. It produced famous ships that brought pride to the Royal Navy and the British people. These ships include the patrol boat M33, the light cruiser hms Belfast, several aircraft carriers and the ubiquitous Flower-class corvette, which escorted thousands of ships across the Atlantic.

The yard produced a total of 140 warships, 123 merchant vessels and 500 tanks during the war.

Today’s Royal Navy is a hollow shell of what it used to be. This was recently evidenced by Britain’s inability to stop Iran from seizing a tanker because it lacked enough ships in the area to respond quickly.

Other embarrassing problems have dogged the Royal Navy over the years. Engine failures, resulting in total loss of electrical power, plague the Type 45 destroyers, Britain’s newest and most advanced model. There have also been major leaking issues with the Navy’s newest ship, the aircraft carrier hms Queen Elizabeth; in one case, flooding endangered the lives of the crew.

The Ministry of Defense has acknowledged that the current size of the Royal Navy is simply not enough to ensure the safety of Britain’s interests abroad, especially with respect to escorting tankers in the Strait of Hormuz. British Rear Adm. Alex Burton (Ret.) told bbc, “If you do not spend more on defense than we currently are as a percentage of [gross domestic product], then we put at risk the fact that we are currently a credible military power, and from that we put at risk our position on the global stage.”

British Prime Minister Boris Johnson has said that he wants to invest more money into the Navy, so the Royal Navy may find itself in a better position and more capable to meet its challenges.

But this will not last.

Britain’s naval power is at its weakest even as it is most needed. In a 2015 Key of David television program, Trumpet editor in chief Gerald Flurry said, “This violent world is becoming one big military arsenal of nuclear weapons and other weapons of mass destruction and all kinds of conventional warfare armaments. But as we look at these powers of the world, they keep expanding their military, as the United States and Britain shrink theirs.” He then asked, “Does that really make sense to you?”

The British are descendants of ancient Israel. (Order a free copy of The United States and Britain in Prophecy, by Herbert W. Armstrong, for a comprehensive explanation.) Scripture records that God promised unparalleled national wealth to those descendants. That promise was fulfilled during the 1800s, when Britain’s navy ruled the waves, the empire’s merchant ships and trade outposts dotted the globe, and British industry was a dominant force on the world scene.

Today, that wealth and power is evaporating. Iconic symbols of that bygone era, like Harland and Wolff shipyard, are disappearing.

The Trumpet has been warning about Britain’s military decline for many years, as the Plain Truth magazine did before us. A small, overstretched Navy is hastening the process.

To understand how Britain’s rise and decline were specifically prophesied in Scripture, read The United States and Britain in Prophecy, and begin to understand your world as never before.