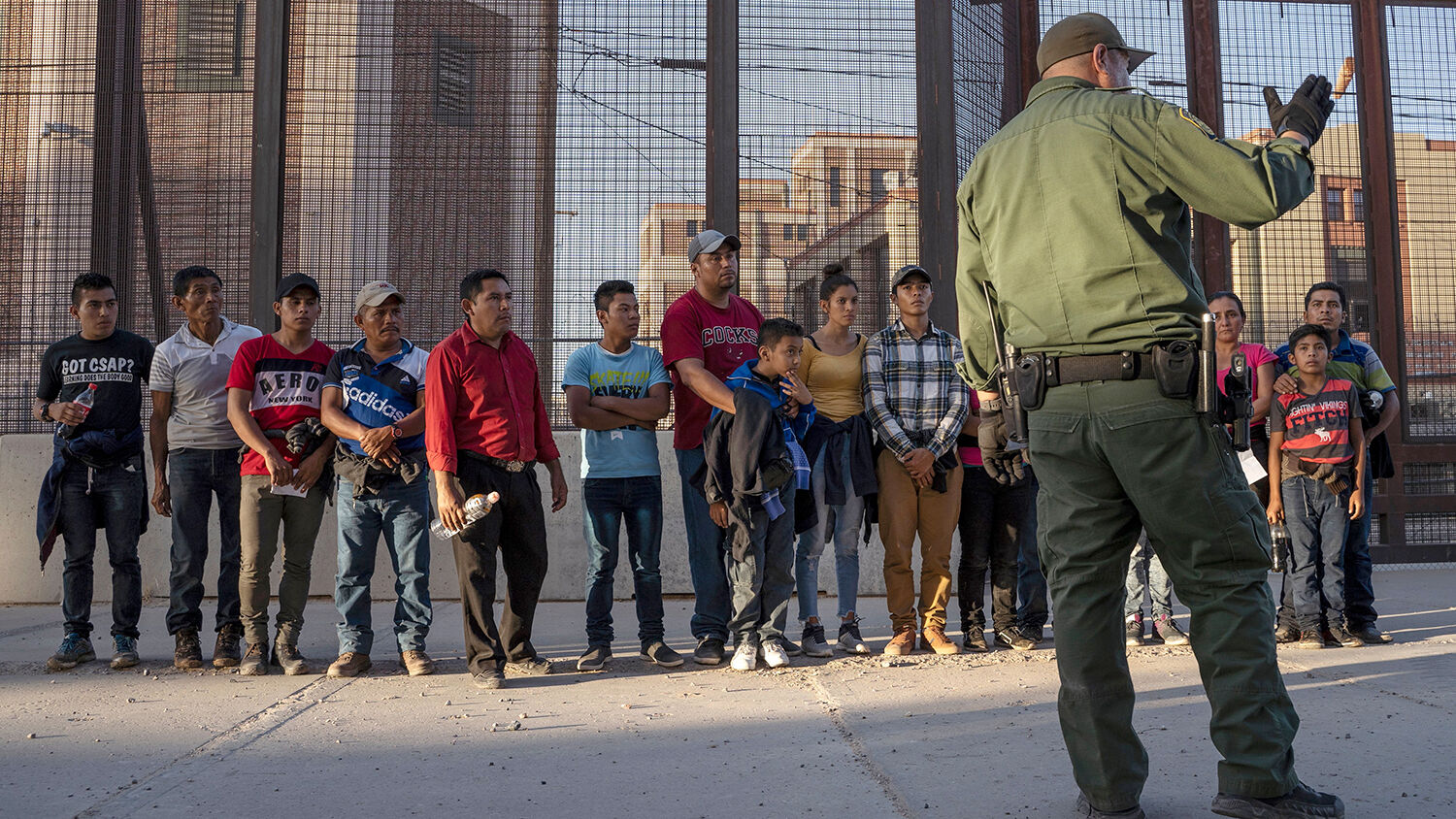 Migrants, mostly from Central America, queue to board a van that will take them to a processing center in El Paso, Texas, on May 16.
Paul Ratje/AFP/Getty Images

American border officials will encounter at least 1.1 million illegal migrants crossing America’s southern border by the end of the 2018–2019 fiscal year, Senate Homeland Security and Government Affairs Chairman Ross Johnson told the Washington Examiner. The fiscal year ends September 30. Totals so far this year are exceeding records from 2014 and the 1990s, and the number of migrants who elude border agents is unknowable.

On an average day, 3,000 migrants are apprehended at the southern border. The one-day record stands at 4,652, Johnson said.

“As of June, first nine months of this fiscal year, 495,000 children and family units have come to this country. If June’s pace continues, we’ll be over 700,000. Given this flow, no one should be surprised that Border Patrol stations are well beyond their capacity,” said Johnson.

Immigration on the southwest border is facing a rapidly growing crisis. According to acting Homeland Security Secretary Kevin McAleenan, facilities designed to hold only 4,000 are now holding 6,000.

Immigration in the Rio Grande Valley is also setting records. Since the beginning of the fiscal year, over 301,000 migrants have been apprehended, exceeding the record number of migrants in 2014, which only reached 256,000.

On average, 1,500 migrants are arrested each day in June in the Rio Grande Valley. The terrain in many places makes patrols difficult.

One Rio Grande Valley Border Patrol agent told Conservative Review’s Daniel Horowitz that the border forces are already overburdened: “What’s happening now is that we have no manpower dealing with the seams in the border while we are processing all the family units. The numbers have gone down since the peak in May, but we literally have minimal idea who is getting past us.”

“It is essential that we fix this problem.”
RAW VIDEO: Border Patrol Rio Grande Valley Sector Chief Rodolfo Karisch on the overflow of immigrants crossing into the United States through the RGV. Check out the uncut video. @kgbt @CBPRGV #BorderPatrol #RGV #BorderNews #Immigration pic.twitter.com/lUXeIYHyuD

The United States has been the most prosperous nation on Earth and continues to lead the world in financial prosperity, natural resources and military power. This is not because of any superior virtue within America, but because America has been blessed by God.

The Trumpet often writes about the fact that the U.S. is largely made up of the descendants of ancient Israel (order a free copy of The United States and Britain in Prophecy, by Herbert W. Armstrong, for proof). God promised Abraham that He would give his descendants unparalleled blessings, which America has received despite its disobedience.

The Bible also prophesied America’s social and military decline. Headlines are reporting this decline more frequently than ever before.

America’s border crisis plays a large role in this.

Many immigrants are grateful to find security and employment in the U.S., but illegal immigration is hurting that security. The Bible reveals that mass immigration will do more harm than good in the long run.

Verses 43-44 say: “The stranger [or foreigner] that is within thee shall get up above thee very high; and thou shalt come down very low. He shall lend to thee, and thou shalt not lend to him: he shall be the head, and thou shalt be the tail.”

America’s border crisis is leading to a future of violence. Ezekiel 5 describes an entire third of the U.S. population perishing in race riots and domestic violence. As more illegals enter the country, the potential for violent racial conflict is increasing. Mr. Flurry wrote in “Where America’s Race Riots Are Leading”:

But notice the first part of verse 52: America’s “high and fenced walls [are to] come down.” Aren’t we seeing that take place right now? This is talking about a virtually open border where foreigners flood into the land. Illegal immigrants are streaming over the Mexican border in droves—and that is clearly the way some of our leaders want it.

Do you realize that the immigration problem befalling America right now is actually prophesied here in Deuteronomy? The influx of more races into the United States will only worsen the siege of Ezekiel.

Why would God allow this to happen? Mainly because, as Mr. Flurry explained, America as a whole has shown ingratitude and rebellion against God, even after He had blessed it like no other nation in history.

Many Americans want to see changes at the southern borders. But no border wall or new immigration law can solve the crisis or avert the prophesied riots. Mr. Flurry’s free booklet Great Again provides God’s clear solution to America’s border crisis. Only turning to God’s laws can and will permanently solve these issues.