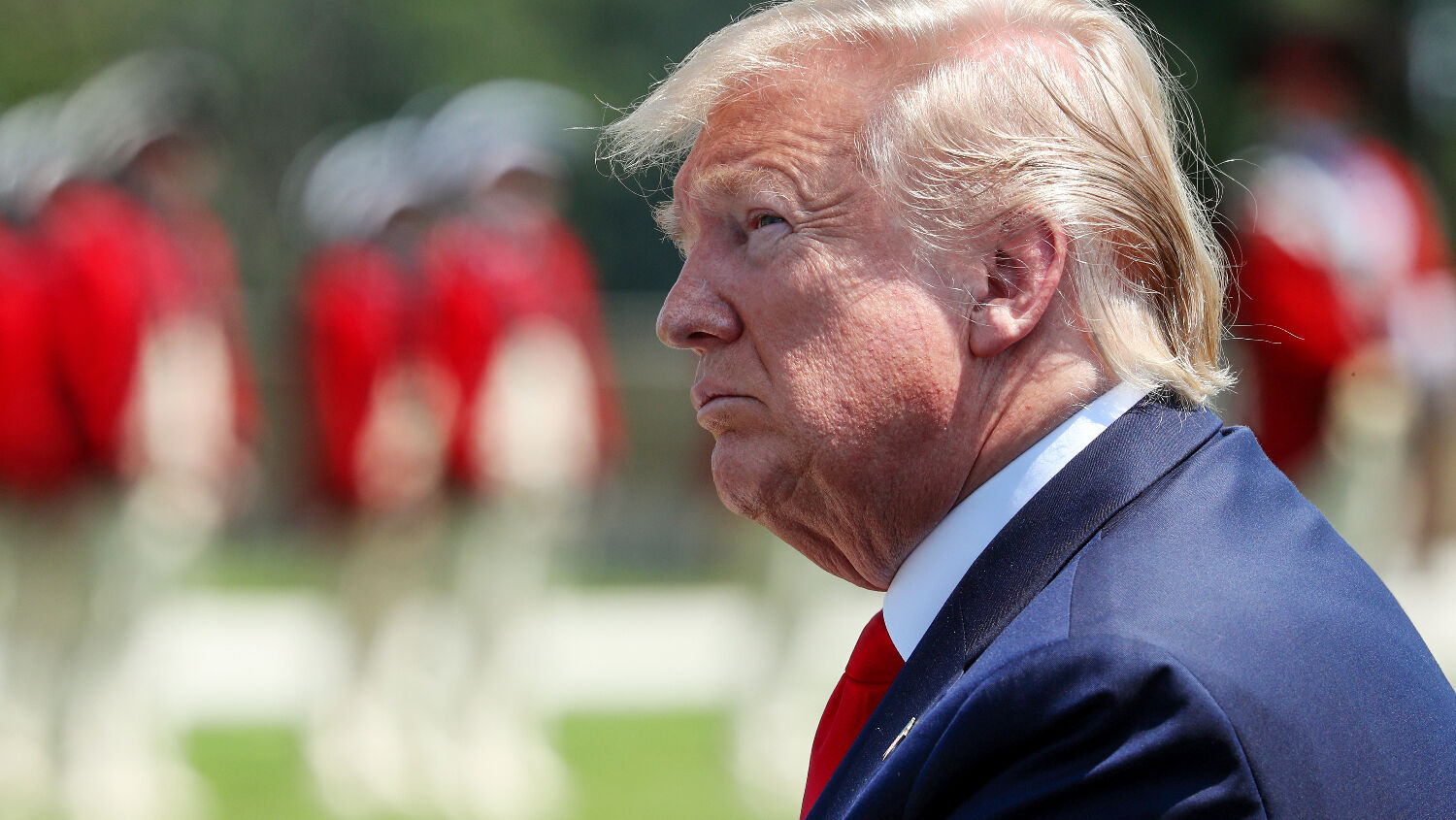 President Donald Trump participates in a full honors welcome ceremony for new Secretary of Defense Dr. Mark Esper, on the parade grounds at the Pentagon, on July 25, 2019 in Arlington, Virginia.
Getty Images

To say that United States President Donald Trump is saving Britain is unpopular here in England, but consider the facts.

Our new prime minister, Boris Johnson, is relying heavily on the American president in his strategy for bringing Britain out of the European Union. He has penciled in plans to meet with Mr. Trump three times before the Brexit deadline on October 31—including “quality time” with the president in August. A trade deal with the United States is one of his government’s top priorities.

This relationship strengthens Mr. Johnson’s negotiating position against the EU. We don’t need a deal with you, he can tell Brussels, we’re best friends with one of the largest and most powerful economies on Earth.

But how different would it be if the current president of the United States were Hillary Clinton?

“I make no excuse for being against Brexit from the start,” Clinton said during a speech to Queen’s University Belfast in 2018.

“[I]t may well go down as one of the greatest and most unnecessary self-inflicted wounds of modern history,” she told students. In 2017, she told the Sunday Times that Brexit supporters “voted against modern Britain and the EU, believing that somehow this would be good for their small village. It made no sense.”

She said this after 17.4 million British voters (52 percent) voted to leave the European Union. Forcing Clinton to choose between the EU and Britain, she said, was forcing her to choose the EU.

While receiving an honorary degree at Swansea University in Wales in October 2017, Clinton reiterated her solidarity with the EU: “I personally continue to believe in the value of the European Union, and more broadly of a Europe that is whole, free and at peace.”

We saw what this looked like in practice when Barack Obama was in the White House. He told the world in April 2016 that his top priority would be a trade deal with the EU and that if Britain chose Brexit, he would put it “in the back of the queue.”

Leftists in the U.S. love the EU. They love its system of rule by experts, power centralized in one super-bureaucracy, and minimal interference by the actual voters. That is exactly the way they want to change the United States. If they could, they would probably bring the U.S. into the EU.

Rule by experts, centralized bureaucratic power, and minimal power for citizens is exactly the model Brexit voters rejected. It was clear before the referendum, and it is clear after the referendum, that a Democratic administration in the U.S. would never side with Britain over the EU.

Right now, “President” Hillary Clinton would not be promising any lucrative deals to Prime Minister Johnson. She would instead be on Europe’s side, forcing Britain to accept a deal with the EU that makes it a humiliated, all-but conquered supplicant—an example of punishment to warn others not to put democracy over bureaucracy.

When Britain voted to leave the EU in 2016, almost everyone believed a Clinton presidency was inevitable. Former President Obama had an infamously frosty relationship with the United Kingdom. He kicked Winston Churchill’s bust out of the White House. Mr. Obama said that “we don’t have a stronger friend and stronger ally” than France, and that German Chancellor Angela Merkel was his “closest international partner.” And Britain? A congressional think tank unveiled a secret memo that said, “The UK may not be viewed as centrally relevant to the United States in all of the issues and relations considered a priority on the U.S. agenda” (emphasis added throughout).

With President Obama’s former secretary of state about to take power, little seemed set to change. But then Donald Trump won the election.

Mr. Trump loved Brexit even before he was voted into office “I love to see people take their country back,” he said after the Leave vote won. He has consistently promised to fast-track Britain to the front of the queue. The most powerful and prosperous nation in the world suddenly switched from enemy to ally when it comes to Brexit.

Ideally, Mr. Johnson would like to leave the EU with some kind of deal. He wants to make Britain its own proper sovereign nation again, and also find a way to keep trade flowing smoothly with the EU, to benefit both. President Trump’s offer of a trade deal helps him enormously. Without it, the British would appear desperate, with no good trading options except for going back to the very Union from which they are trying to extricate themselves. Europe would have gambled that Britain would pay a high price—even surrendering sovereignty—in order to gain trade concessions from Brussels.

The Europeans may still gamble, but that is now looking much less likely. A Britain with other options is a Britain in a much more powerful position.

The prospect of a trade deal helps on the home front too. Many members of Parliament want to avoid a “no-deal Brexit.” Whether Mr. Johnson wants to use no-deal as a credible threat to EU negotiators, or whether he’s truly willing to go through with it, he has to keep his own Parliament from shutting down a no-deal. It will be hard, and he may fail. But that task would be much harder if President Trump were not holding out hope for a strong trade agreement with America.

Would Conservative M.P.s and party members have had the confidence to elect someone like Boris Johnson if it weren’t for Mr. Trump’s promise of support and friendship?

Getting Britain out of the EU without it vengefully smashing the economy won’t be easy. But without President Trump, it may have been impossible.

Last week I focused on Bible prophecies of a modern-day Jeroboam. 2 Kings 14:27 states that the ancient kingdom of Israel was about to be destroyed, but God “saved them by the hand of Jeroboam.”

Other prophecies indicate that God will save modern Israel—primarily Britain, America and Israel in the Middle East—through a modern type of King Jeroboam ii. You can study this in detail in Trumpet editor in chief Gerald Flurry’s May-June 2018 article “Saving America From the Radical Left—Temporarily.”

“Those people [radical leftists] were getting control of the government,” wrote Mr. Flurry in the August Trumpet issue. “Justice in the land was destroyed. Rule of law was twisted and perverted. People were losing faith in the government. If this trend had continued, it would have meant the end of our republic!

“But God was not ready for that. He was going to save America—along with Britain and the Jewish nation. However, this would be only temporary, unless they deeply repent. There is no evidence this is going to happen.”

So is Donald Trump saving Britain? No. But when you look at this prophecy, and compare it to the facts on the ground, could God be using President Trump to save Britain?

It’s important to note that this rescue is temporary. God still prophesies that Britain and America will be punished unless they repent and turn to Him—and we see no sign of either nation doing that. But the reprieve, the punishment and what will come afterward all stem from God’s love.

God is punishing our nations. But He is carefully measuring those punishments. He wants our people to repent. He will make sure they have time to hear His warning and act on it. He is saving our nations temporarily to make sure that happens. Then, if they do not change, they will be punished for their own good. That punishment will ultimately enable them to receive wonderful blessings.

Events around the world are evidence of a loving God who has a plan for Britain, America and the whole world. If you’re not familiar with that plan, please read The United States and Britain in Prophecy, by Herbert W. Armstrong. With millions of copies distributed, it would be considered a bestseller—but we don’t sell it, we give it away. This book explains the causes of world events and the loving God behind them.