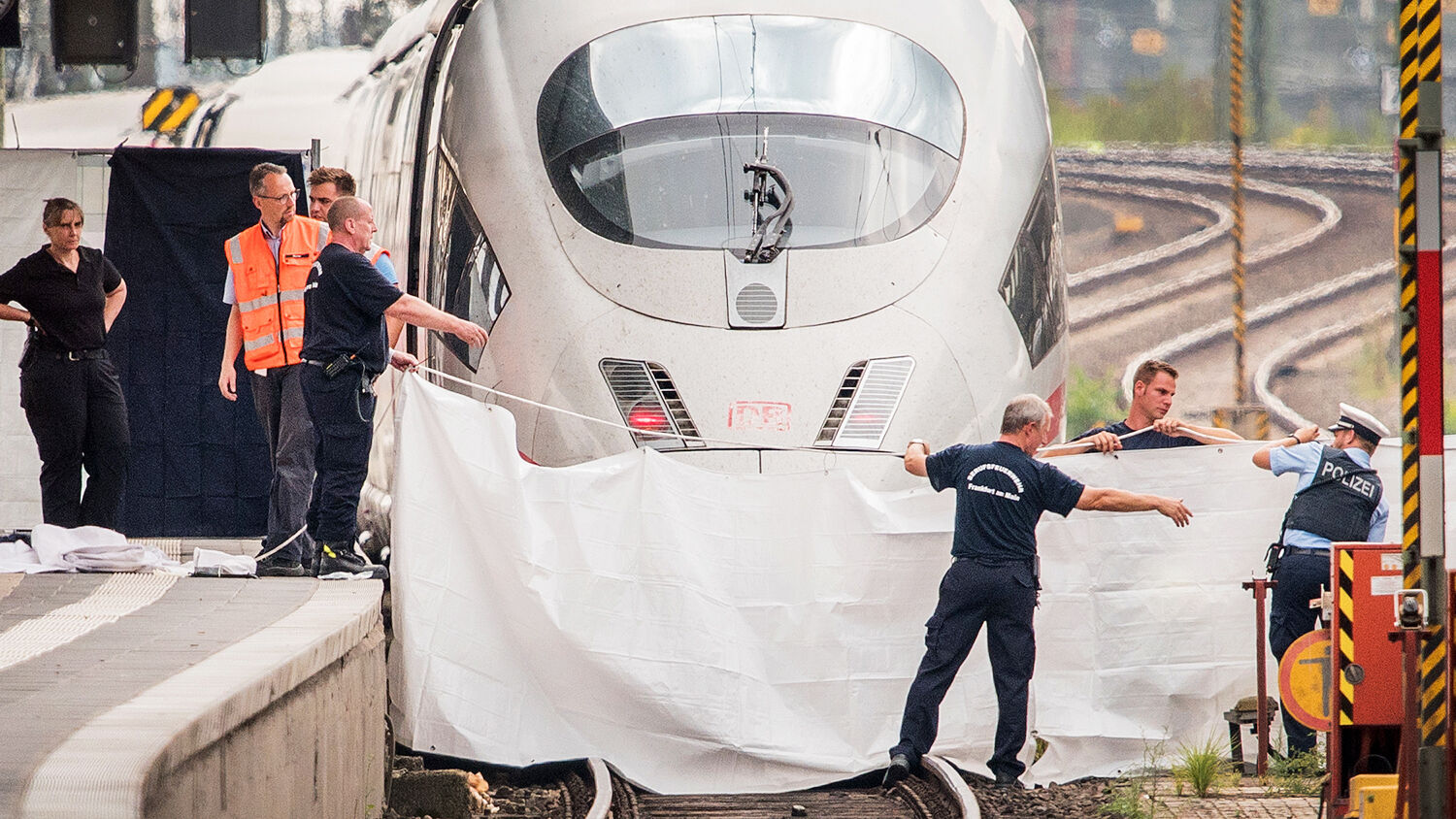 Policemen and firefighters stretch a white tarpaulin in the main station as a screen against a train in Frankfurt, Germany, where an 8-year-old boy was killed.
Getty Images

An Eritrean citizen shoved a mother and her 8-year-old son into the path of an express train entering Frankfurt’s main station shortly before 10 a.m. on July 28. The attack caused major chaos and ignited outrage from citizens and government officials, adding fuel to an already raging debate over immigration and the status of foreigners in Germany.

The mother was able to roll out of the way of the oncoming train; however, she was unable to save her son.

The attacker then tried to push a 78-year-old woman onto the tracks, but the woman successfully defended herself.

Witnesses immediately pursued and detained the suspect until police arrived.

In the aftermath, a large police force guarded the scene. Firefighters, a helicopter and 16 ambulances also responded. Six platforms—a sizable part of the station—were closed off until the evening, delaying and canceling trains.

The Eritrean attacker has lived in Switzerland since 2006, when he applied for asylum there. Eritrea is a predominantly Sunni Muslim country.

German Interior Minister Horst Seehofer urged the public to avoid drawing conclusions about the attack, saying, “I note that some parts of the public have already formed a judgment of this incident.”

German Interior Minister Horst Seehofer (CSU) has come back early from his vacation after the death of an eight-year-old boy at Frankfurt’s main railway station. He wants to hold talks with security agencies and other authorities.

Seehofer interrupted his vacation to address the attack, citing “several serious crimes” recently. This may refer to a similar attack perpetrated almost a week before, when a 28-year-old man from Kosovo, previously known to police, killed a 34-year-old mother by pushing her in front of an oncoming train at Voerde Station in the province of North Rhine-Westphalia.

Both attackers were from predominantly Islamic areas. Kosovo is 96 percent Muslim. In both cases, the attackers did not know the victims nor were they intoxicated or using drugs.

Whether or not the suspects were motivated by Islamic ideology, the effect on the German public has been the same. The crimes are perceived as attacks on German society by a hostile, outside culture.

Alice Weidel, leader of the far-right Alternative für Deutschland party, called the most recent attack a result of the “borderless welcome culture in Europe.”

North Rhine-Westphalia, where the first attack took place, has more Salafists (those who advocate for Sharia law) than any other province in Germany. According to Deutsche Welle, some Salafists “do not reject the use of violence, but consider it a legitimate way to realize their religious and political views. They view not only the West as their enemy but also other Muslims with different views.”

In 2016, Germany’s Interior Ministry banned Salafist groups from promoting themselves on public streets. The groups did not go away—they are merely in hiding.

Whatever further details come to light about the most recent attack, the fact that the attacker was Eritrean will only stir public concern over violence committed by migrants. “With the German states of Saxony and Brandenburg heading for parliamentary elections on September 1,” Deutsche Welle wrote, “the apparent attack in Frankfurt is likely to fuel the emotionally charged discussion about refugee policy spearheaded by Chancellor Angela Merkel.”

In a contributing article to our booklet A Strong German Leader Is Imminent, Brad Macdonald wrote, “Angela Merkel isn’t genuinely liked. Merkel might have the most important job in Europe, but it’s also the most dangerous. The Continent is experiencing a complex and historic crisis …. Angela Merkel has the impossible task of fixing Europe, and in a way that satisfies everyone.” The migration crisis in Germany has done more to hurt Merkel’s popularity than perhaps any other problem.

As Seehofer implied, many have blamed the recent attack on Merkel’s immigration policies and radical Islam.

“A strong German leader is imminent!” writes Trumpet editor in chief Gerald Flurry in his booklet by that title. “When he comes to power, this world will be shocked as it has never been shocked before.” By using the sure word of Bible prophecy, Mr. Flurry is able to make such a statement about a country often viewed as modern, enlightened and tolerant.

Germans are searching for better and stronger leadership. Major changes are coming. Bible prophecy says that these changes will bring a radically different Germany in a very short span of time. Mr. Flurry calls this prophesied transformation “one of the most astonishing prophecies in the Bible!”

The Bible says that Germany will be led by a “king of fierce countenance” (Daniel 8:23). “This soon-coming ruler could literally be called a king,” Mr. Flurry explains. “Even if he is not, the Bible gives him that label.” He shows that this leader will be invited in during a crisis (Daniel 11:21). He wrote in 2015 that, “given the atmosphere of crisis and the political climate in Germany today, we should watch for this prophecy to be fulfilled at any time!”

The Bible prophesied what we see in Germany today. And it reveals the outcome of Germany’s leadership crisis ahead of time. Request a free copy of A Strong German Leader Is Imminent to see beyond today’s headlines with the proven insight of Bible prophecy.