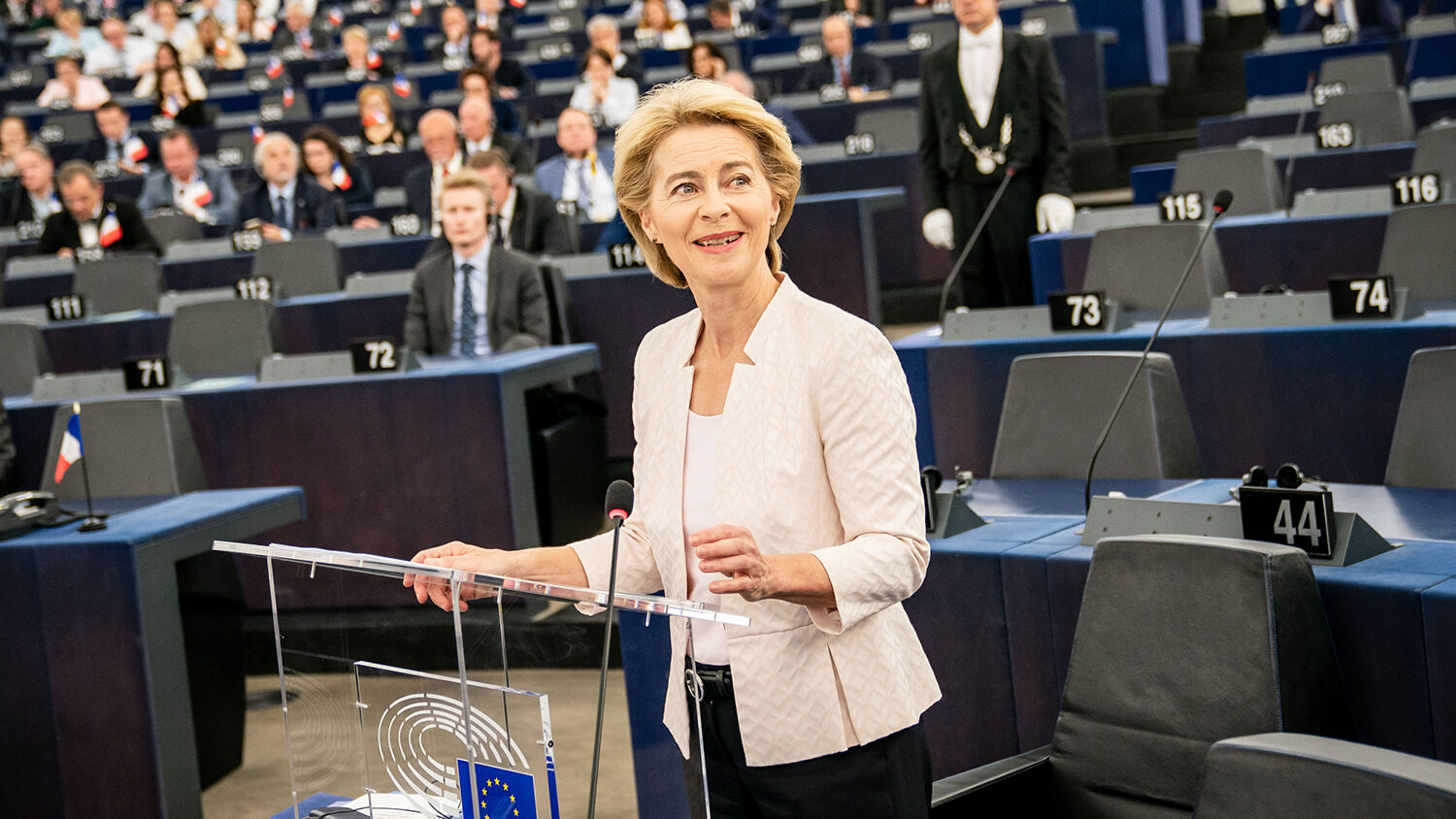 New push for European unity prepares the way for a strongman.

July 16 marked the day that Ursula von der Leyen, then defense minister of Germany, was voted president of the European Commission. The vote was a triumph for European unity, a disaster of bickering and disagreement, and a preview of how a stronger European leader will soon emerge.

“Anyone that is with me in wanting to see Europe grow stronger and to flourish and blossom can count on me as a fervent supporter. However, anyone that wants to weaken or divide Europe or rob it of its values will find in me a bitter opponent. There is only one option for me: to unite and strengthen Europe.”

Though these words could have been uttered by a Frankish emperor from the seventh or eighth century, they were said by Ursula von der Leyen in Strasbourg on July 16. It was one of many statements that left no question about which direction she will take the European Union.

Ursula von der Leyen, President-elect of the EC, has put forward priorities for her mandate:
European Green Deal
An economy that works for people
Digital Europe
Protecting our European way of life
Stronger Europe in the world
New push for European democracy. pic.twitter.com/Lr0OJc72ej

Her other pledges included introducing a number of EU-level financial institutions, including a complete banking union, EU-wide minimum wage, and EU-wide taxes on tech companies. “If by the end of 2020 there is still no global solution for a fair digital tax, the EU should act alone,” she stated.

She also “called for a comprehensive ‘European Rule of Law Mechanism’ to ensure the primacy of EU law over the national laws of EU member states,” explained Soeren Kern, a senior analyst for Transatlantic Relations at a Spanish think tank, writing for the Gatestone Institute.

As Kern wrote, this amounts to a major power grab:

An examination of von der Leyen’s main policy proposals reveals that she is calling for a massive expansion of top-down powers of the European Commission. Her proposals would substantially increase the role of Brussels in virtually all aspects of economic and social life in Europe—all at the expense of national sovereignty.

Von der Leyen’s own words best explain her goals. “My aim is the United States of Europe, on the model of federal states such as Switzerland, Germany or the United States,” she told German magazine Der Spiegel in 2011. “I imagine the Europe of my children or grandchildren not as a loose union of states trapped by national interests,” she told Die Ziet in 2016.

The likely next European Commission President, Ursula von der Leyen, has said: “My goal is the United States of Europe – based on the model of the federal states of Switzerland, Germany or the US”. Remaining in the EU is not status quo but a common tax, military and much more.

When Europe becomes more federal, it will develop the capacity to act far more quickly and decisively. In 1966, the early days of European unification, France postponed indefinitely the day when votes would move toward the majority system. In recent months, however, EU officials have been exploring shifting to voting by simple majority instead of unanimity. Italian journalist Luigi Barzini wrote in his book The Europeans that transitioning to majority voting would hasten Europe’s unification, adding that it “would eventually have turned a mere loose customs union riddled with loopholes into a compact confederation like Switzerland or the United States.”

The reality is that much integration has taken place since the 1960s. Europe has come a long way from the loose customs union it once was. Given the right leadership, how much faster could Europe unite today?

Von der Leyen has also called for an end to unanimous voting to decide matters of foreign policy. Notice what else she said to the European Commission on July 16:

I believe Europe should have a stronger and more united voice in the world—and it needs to act fast. That is why we must have the courage to take foreign-policy decisions by qualified majority. And to stand united behind them.

Such terms as “defense union” and “army of Europeans” are her catchphrases for her vision of Europe’s military force; she has called for “further bold steps in the next five years towards a genuine European Defense Union.” She believes Europe needs “an integrated and comprehensive approach” to security and “a stronger and more united voice in the world.”

I believe #Europe should have a stronger and more united voice in the world – and it needs to act fast. pic.twitter.com/iP8TcaNIoR

Various tensions around the world are pushing Europe to militarize. Based on previous interviews with various sources, it appears von der Leyen will likely support further military preparations to deter Russian aggression, as well as contain Chinese influence.

“[Russian] President [Vladimir] Putin does not appreciate weakness. Currying favor or indulgence does not make him friendlier,” von der Leyen told Spiegel Online in 2018. She “sees the facts: Russia has annexed Crimea; it is strangulating eastern Ukraine. Aleppo has been buried under a carpet of bombs by Russian planes.”

She further warned, “Where Russia attacks militarily in the cyberarea, China attacks with economic means. … China woos us with a friendly face. And that’s why we often overlook how single-mindedly it pursues its goals. And how cleverly.”

Von der Leyen has one very determined opponent, however. And he is not Russian or Chinese.

Nigel Farage, British member of European Parliament, described von der Leyen as “a fanatic for building a European army.” He is skeptical of an EU army, because “what is there for defense can also be used for attack.”

We will vote against Ursula von der Leyen today and strike a blow for democracy. pic.twitter.com/NUnWRUywoy

What you’ve seen from Ursula von der Leyen today is an attempt by the EU to take control of every single aspect of our lives. She wants to build a centralized, undemocratic, updated form of communism that will render [obsolete] nation state parliaments, where the state controls everything, where nation state parliaments will cease to have any relevance at all.

The EU under von der Leyen’s leadership will focus strongly on unification, regardless of the cost to democracy. This will progress even faster after Brexit, when British members of European Parliament, who are often opposed to sweeping EU power grabs, will be out of the way.

Cracks in the Commission

Von der Leyen has good reason to speak so often about unifying Europe: The Continent is severely divided.

Her election was hailed a victory for Europe by those who champion her as the first female Commission president. But from a votes perspective, it was a disaster. Von der Leyen was elected with the narrowest margin a president of the Commission has ever received: She received just nine votes above the minimum 374. The last Commission president, Jean-Claude Juncker, was the leading candidate for the largest group in the European Parliament. Von der Leyen was not a candidate for any party. Her appointment has led to much criticism of Europe being out of touch and undemocratic.

“The collateral damage has been huge,” wrote the EU Observer. “Make no mistake, Europe is increasingly rudderless. And Europe is floundering because Germany refuses to lead.”

Though currently divided, Europe will soon get the strong leadership it is asking for.

An opinion piece for the EU Observer captured the mood of Europe’s search for leadership:

A new chancellor, an able German Commission president and Brexit present a new opportunity to reset Berlin’s vision for the future of Europe.

By placing itself confidently at the heart of Europe, Germany needs to set out its vision for the future of the EU. …

But to do this, to really lead and shape Europe, Berlin must realize that you can’t live in fear of the future by trying to remedy the past. Germany deserves more, so does Europe.

Even though Ursula von der Leyen is moving Europe’s institutions and laws in the direction of unification, she is not the kind of leader who can galvanize the everyday people of each nation. Europe wants a German leader who is not shackled by guilt over the nation’s past.

It will get one.

Calls for strong leadership from Europe are relatively new on the world scene. But one source predicted this far in advance.

“Strong leaders are rising on the world scene today in several nations, including Russia, China and Iran. But what about Europe? What about Germany?” Trumpet editor in chief Gerald Flurry asks and answers this question in his free booklet A Strong German Leader Is Imminent.

“A strong German leader is imminent!” he writes. “When he comes to power, this world will be shocked as it has never been shocked before.”

How can he make such a dogmatic statement when Europe has backed away from the world stage for decades?

Mr. Flurry bases his forecasts on God-inspired Bible prophecy. The Prophet Daniel wrote about a power known as “the king of the north” (Daniel 11:40). This power bloc refers to a German-led, united Europe that will burst onto the world scene in our time. In his prophetic passage, Daniel foretold that this European superpower would be led by a strongman who was not elected but instead would “come in peaceably, and obtain the kingdom by flatteries” (verse 21).

Germany has been struggling through fragile coalition governments for over a year. That disagreement is now extending to the vital European Commission, where rival factions are bickering over the controversial and undemocratic appointment of Ursula von der Leyen.

While she is not going to be the strong German leader described in the Bible, she is certainly throwing the door wide open for a strongman to be undemocratically appointed in the near future. And when a strongman who can truly lead and unify the citizens of Europe does appear, Europe’s institutions and military will be ready, thanks to von der Leyen’s work.

You need to watch Germany closely. Order a free copy of A Strong German Leader Is Imminent to get the full, clear picture of where Germany’s complex leadership crisis will end, and why it should matter to you.