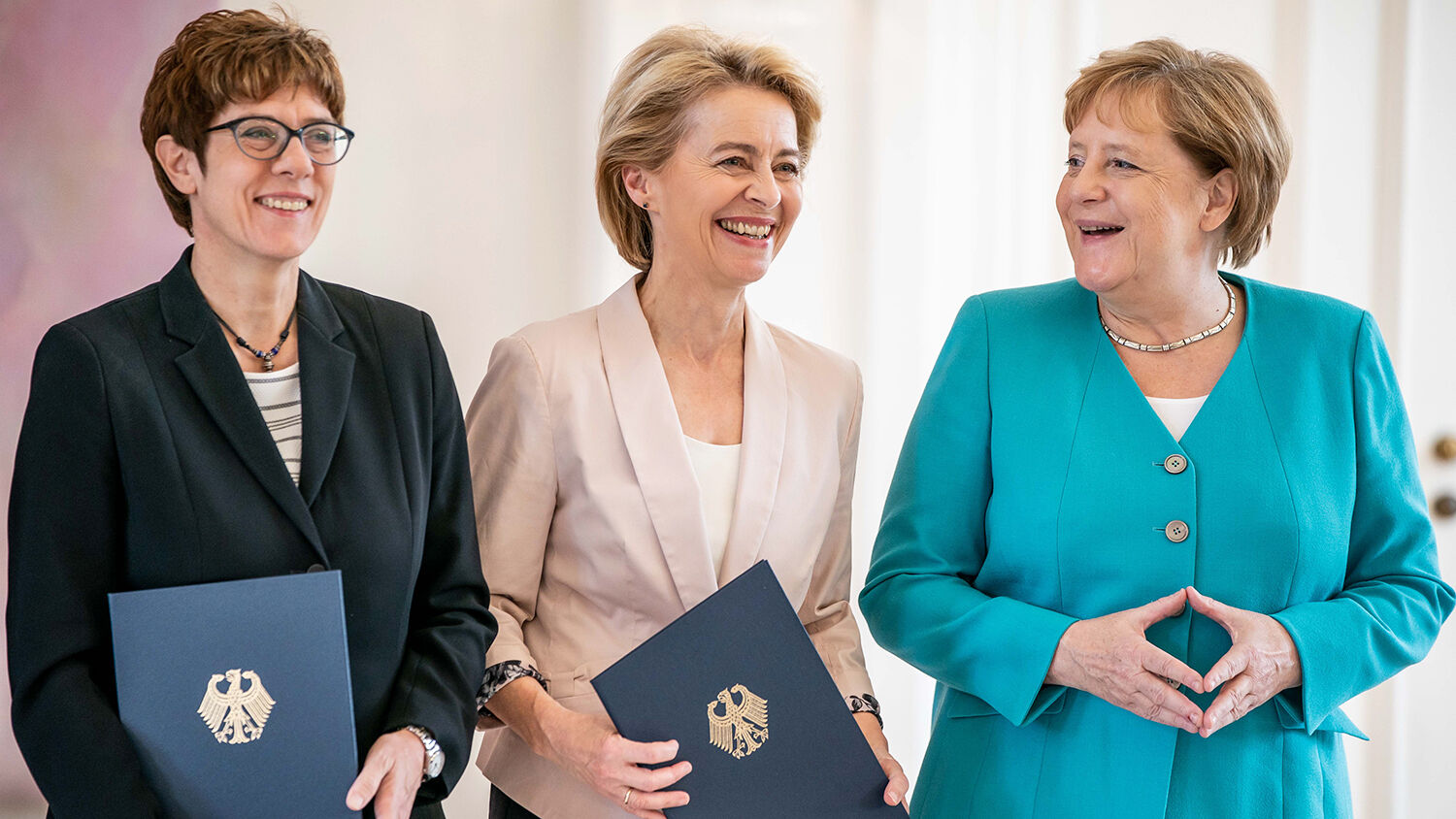 But strong German leadership is coming.

Since last week, Germany’s army, government and the European Union have all been led by three europhiles. Europe’s leaders seem pleased with the result. But the German people feel betrayed.

On July 16, the European Parliament elected Ursula von der Leyen as the president of the European Commission. On the same day, Annegret Kramp-Karrenbauer was assigned the position of German defense minister. The woman who orchestrated these power political shifts was German Chancellor Angela Merkel.

Conservatives bring women into power!Congratulations to @vonderleyen being elected President of the #EUCO and @akk for becoming Germany‘s new Minister of #Defence.Together they have 67 years of polit experience and raised 10 children! #conservativemums #womeninpolitics #sheleads pic.twitter.com/wOyyGqWxg7

Merkel, von der Leyen and Kramp-Karrenbauer are all passionate Europeans. Together, they want to drive forward the European project and a common European army.

Other European nations fear to put Germany—Europe’s most powerful country—in charge. For this reason, the only other time a German has led the European Community was more than 50 years ago. Perhaps Europe’s fear of a dominating Germany is significantly lessened when the country’s top leadership positions are occupied by females.

German Defense Minister Ursula von der Leyen was voted yesterday as the new president of the European Commission with 383 out of 747 votes in the European Parliament. pic.twitter.com/cdPkRvu5ku

Both French President Emmanuel Macron and Hungarian Prime Minister Victor Orbán agreed to the appointment of von der Leyen. The two leaders represent the interests of Western and Eastern Europe. Although not always in agreement, both men fear a dominating Germany and support the advancement of a European army. Von der Leyen seemed to be a good compromise.

From a European perspective, everything seems to be working out wonderfully: Europe is advancing, and Germany is unable to dominate. But if you consider what challenges these three women face, you will quickly realize their jobs demand radically different leadership.

Neither European parliamentarians nor EU leaders could initially agree on who should be president of the European Commission. Originally, von der Leyen wasn’t even considered to be an option. But after weeks of debates, no other candidate garnered the necessary support from EU leaders and Parliament. Prior to von der Leyen’s appointment, German Chancellor Merkel supported two other candidates to no avail.

When the European Council finally proposed von der Leyen to the Parliament, the result again illustrated how divided Europe is: She received 383 votes, only nine more than the required majority. Von der Leyen thus rose to the highest position in the EU despite opposition from many Germans and even her own party’s coalition partner, the Social Democrats.

Von der Leyen’s popularity in Germany has been in gradual decline. In recent months, she has been accused of mismanaging the army and has been entangled in various scandals. Expecting an early resignation, many Germans were shocked that she was instead promoted.

With von der Leyen’s new position, the scandal-ridden Bundeswehr needed a new head. On the evening of July 16, it was announced that Kramp-Karrenbauer would become Germany’s new defense minister. To say that this decision surprised many Germans would be an understatement. Just days prior to the appointment, Kramp-Karrenbauer said that she had no plans to take on any ministerial duty.

Kramp-Karrenbauer is another of Merkel’s trustees and her desired successor as chancellor. A job in the ministry would allow for such a transition. But like von der Leyen, Kramp-Karrenbauer’s is losing popularity.

In a survey published by Spiegel Online, 3 out of 4 Germans said they view Kramp-Karrenbauer’s appointment as defense minister as negative. Not only do many question her qualifications for the post, they also believe that the ministry is just another step for her to become chancellor. Many in Germany are outraged that such an important ministry is being used for power political games.

Yet Ms. Merkel got her will in the end. The political turmoil seems to be settled. Even the EU may temporarily benefit from the trio led by Merkel. The chancellor went into summer break confident that the EU’s top spot is in good hands and that her coalition will hold for a few more months. Von der Leyen is giving passionate speeches to rally Parliament’s support. And Kramp-Karrenbauer is hoping to better her reputation by solving the mounting challenges the army faces.

If everything runs smooth, the divided EU may make it five more years. Germany’s fractious coalition may hold until its legislature period ends in 2021. The German Army may escape a few of its scandals, move toward a European army, and cause Kramp-Karrenbauer to qualify as Germany’s next chancellor.

But what if doesn’t run as smoothly as planned?

The recent political turmoil has shown that neither Ms. Merkel nor any other leader in Europe has the power to make decisions that others will follow. For now, Europe is willing to endure the weeks of debates before reaching a decision. But the German people are looking for a leader to solve its problems in the army, the government, and on the European level. Germany’s current leadership is just kicking the can down the road.

The Bible, however, prophesies that a crisis will come that will require decisive action. It will be a crisis so large that a weak leader and divided Europe will be unable to cope. It will demand quick responses that can only be administered by a strongman who leads a united Europe.

If Europe wants to become a true superpower, it needs Germany—and Germany needs a strong leader. The late theologian Herbert W. Armstrong wrote in the Good News in May 1953: “Without Germany such a federation of nations is impossible. [It is] probable that none but a German can provide the dynamic, inspired leadership required to organize such a political military federation.”

Von der Leyen wants such a European superstate. In an August 2011 interview with German newsmagazine Der Spiegel, she said: “My aim is the United States of Europe, on the model of federal states, such as Switzerland, Germany or the United States.”

But neither Ms. Merkel, von der Leyen nor Kramp-Karrenbauer are able to provide the necessary leadership to create such a federation. And Europe is currently unwilling to accept such strong German leadership. The Bible, however, shows that this will suddenly change. Revelation 17 says that in the end time, 10 kings will rise in Europe and at one moment support one leader who rules them all: “And the ten horns which thou sawest are ten kings, which have received no kingdom as yet; but receive power as kings one hour with the beast. These have one mind, and shall give their power and strength unto the beast” (verses 12-13).

“[S]ome leader is going to hijack the European Union!” editor in chief Gerald Flurry wrote in the November 2002 Trumpet issue. “The person who leads Germany will also lead Europe. Germany already dominates Europe—to a degree that is shameful, if you consider its past. Remember, it started both world wars—in which 50 to 60 million people were killed. Nobody should forget or ignore that past—including the German people!”

The world may look at Europe and Germany today and see no significant threat. Even as European armies merge under the leadership of three German women, no one fears the risk of another world war. But the Bible warns against such complacency, because a sudden change in leadership will turn the seemingly peaceful Europe into an incredible war machine.

The stage for the fulfillment of this prophecy is set all around us. Request our free book Germany and the Holy Roman Empire to learn where this prophesied strong leader will take Europe. Our literature will explain why the consequences of a powerful European empire are worse than most expect, and give the good news that follows these dire prophecies.