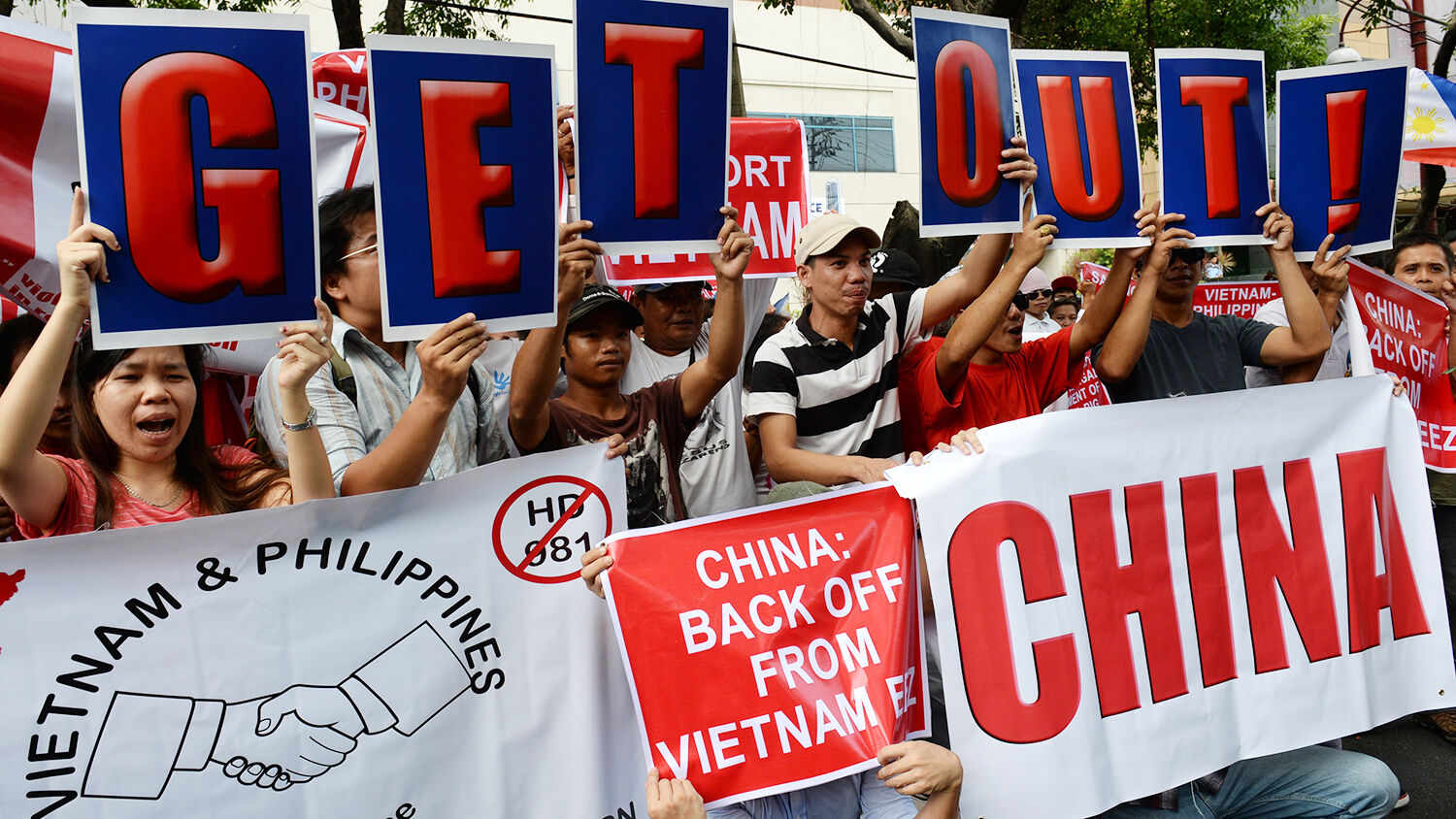 Vietnamese protesters they shout slogans during an anti-China protest in front of the Chinese Consulate in the financial district of Manila on May 16, 2014.
TED ALJIBE/AFP/Getty Images

More evidence that China is ‘steering the world toward war.’

China has hindered oil and gas drilling operations in Malaysian and Vietnamese waters since May, raising the risk of a collision and escalating regional tensions.

The Asia Maritime Transparency Initiative said on July 16 that throughout most of May, a Chinese vessel “heavily patrolled” waters near Luconia Breakers on the Malaysian continental shelf. The unusual Chinese patrolling included passes through block SK 308, where Malaysian-led gas drilling operations are underway. The Transparency Initiative said a Chinese Coast Guard vessel “circled provocatively close” to ships servicing a rig in the block, “coming to within 80 meters.”

China has been using the same tactics in Vietnamese waters since mid-June. Near a drilling rig in block 06-01, a Chinese ship maneuvered between Vietnamese supply vessels at “high speed,” the Transparency Initiative said, “passing within 100 meters of each ship and less than half a nautical mile from the rig.” Chinese and Vietnamese coast guard ships have been engaged in a standoff in the area ever since.

In both cases, China’s harassment occurred within the internationally recognized exclusive economic zones of Malaysia and Vietnam. But China does not recognize these zones, and instead uses its “nine-dash line” to claim nearly the entire South China Sea as its own territory.

The Transparency Initiative said that, taken together, these developments reveal a Chinese double standard: “China’s actions off both the Malaysian and Vietnamese coasts since May show that Beijing is increasingly willing to employ coercion and the threat of force to block oil and gas operations by its neighbors, even while pursuing its own energy exploration in disputed waters.”

The report said that due to the “close quarters and provocative behavior on display,” there is a significant risk that an “accidental collision could lead to escalation.”

Trumpet editor in chief Gerald Flurry has said that China’s takeover of the strategic South China Sea and its increasingly belligerent behavior will indeed lead to a dramatic escalation. In July 2016, he wrote that China’s bullying of less powerful nations in the region “is steering the world toward war.”

Since Japan’s defeat in World War ii, America has protected this vital trade route and brought peace to this part of the world. Now the American military is retreating, and other great powers are coming in to fill the vacuum. … China is intimidating the nations of Southeast Asia into submission to its will. … Everything is headed in the direction of war.

Mr. Flurry’s comprehension of the South China Sea dynamic and what it will lead to is founded on Bible prophecy.

In Deuteronomy 28:52, God issues a dire warning to the modern nations that descended from ancient Israel, explaining that if they reject Him and His law, He will give control over the world’s strategic sea “gates”—such as those accessing the South China Sea—to their enemies. He warns that these enemy powers will weaponize that control and eventually besiege the nations of Israel: “And he shall besiege thee in all thy gates, until thy high and fenced walls come down, wherein thou trustedst, throughout all thy land ….”

Mr. Flurry explained that this warning was not intended for the ancient Israelites under Moses, but for two modern countries primarily. He wrote: “It is a prophecy for the modern-day descendants of Israel. Two nations, in particular, represent Israel in this end time: America and Britain.”

These two countries “are full of terrible sins today, and God is going to correct them for that!” he wrote. “This prophecy and several others show that He will send foreign enemies to punish America and Britain!” (For proof that America and Britain descended from ancient Israel, read The United States and Britain in Prophecy, by Herbert W. Armstrong.)

China’s hindering of Malaysia and Vietnam drilling in their own waters and China’s general takeover of this strategic maritime region show that this prophecy in Deuteronomy is in the process of being fulfilled.

Mr. Flurry stressed that we must carefully watch the developments leading to the prophesied besiegement. He also emphasized that as alarming as the future destruction is, it is intimately connected to some of the best news we could possible hear:

All this prophesied destruction is what it will take for God to reach this world! After this, people will be ashamed—and they will get to know God! Ezekiel repeatedly talked about that inspiring conclusion (e.g. Ezekiel 6:7; 7:4; 11:10; 12:20; 13:9; 23:48-49, etc). Yes, there is a lot of bad news when you consider what it takes to get people to the point of knowing God. But ultimately, the outcome is spectacularly good news!

To understand the inspiring details of this “spectacularly good news,” order your free copy of Mr. Flurry’s book Ezekiel: The End-Time Prophet.